Kindred Spirits: Asher B. Durand and the American Landscape

“Kindred Spirits: Asher B. Durand and the American Landscape,” the first major retrospective in 35 years devoted to this celebrated leader of the Hudson River School, was on view from Sept. 14 through Jan. 6, 2008 at the Smithsonian American Art Museum.

The exhibition presented 57 works, including some of the most beautiful and well-known American landscape paintings of the 19th century. Works from every aspect of Durand’s long career as a major engraver, portrait painter and landscape painter are on display. These include the iconic 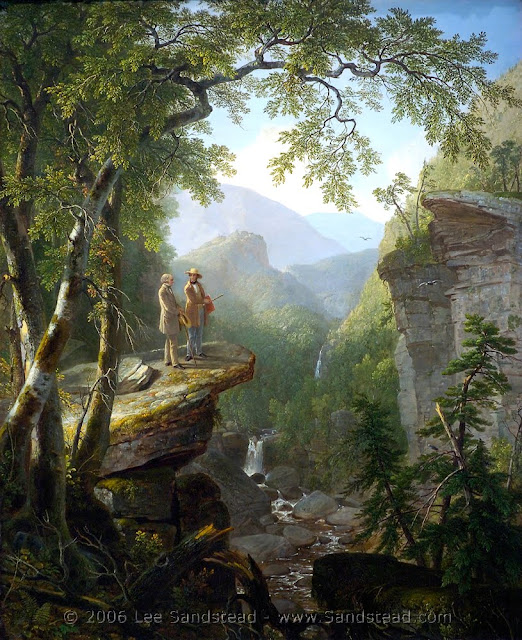 as well as a generous selection of his plein-air painted sketches, often referred to as his “Studies from Nature.”

New research and new approaches to the study of art history prompted this fresh look at Durand’s contribution to American art. “Kindred Spirits: Asher B. Durand and the American Landscape” was organized for the Brooklyn Museum by Linda Ferber, vice president and director of the museum division of the New-York Historical Society and former Andrew W. Mellon Curator and chair of American art at the Brooklyn Museum.

Asher B. Durand (1796–1886), the acknowledged dean of the American landscape school from his election as president of the National Academy of Design in 1845 until his death at age 90, was a figure of central importance in American art. During these 40 years, Durand set the tone for American landscape painting, which celebrated man’s relationship to nature and the wilderness. He helped to define an American sensibility about the land, setting it apart from European traditions, and he perfected innovative compositional elements, such as the vertical format for scenes. Durand’s influence hastened the decline of history painting in the mid-19th century and the rise in popularity of landscape paintings, which were increasingly considered great works of art.

Durand was an early and influential proponent of sketching outdoors. In the late 1840s, the distinction between plein-air sketches for an artist’s personal use and the larger-scale finished landscape paintings for public display collapsed. Durand, who was influenced by the British critic John Ruskin, advocated a naturalistic approach to landscape. This progressive attitude, which aligns Durand with other supporters of realism, lends a modern sensibility to his work.

The exhibition was organized in a chronological and thematic manner that reflects the stages of Durand’s career, with emphasis given to the landscape paintings for which he is best known today. His multifaceted six-decade career spanned the period from the earliest efforts of artists and writers to create a national cultural identity through the mid-century triumph and subsequent eclipse of the Hudson River School.

Durand’s most famous painting, “Kindred Spirits,” was the centerpiece of the exhibition. It was commissioned by New York businessman and arts patron Jonathan Sturges as a gift for William Cullen Bryant, who had delivered a moving eulogy for Thomas Cole at the National Academy of Design in 1848. The painting depicts Bryant and Cole in the wilderness of the Catskill Mountains in New York and was intended as an homage to Cole and as a demonstration of Durand’s position as leader of the landscape school. The botanical precision of the mountain forest and foreground trees marks a new direction toward realism in Durand’s work. one of Durand’s best-known pastoral images.

An engraving based on the painting was distributed in 1850 to the members of the American Art-Union, a popular method for promoting fine arts. In this scene, Durand depicts the coexistence of man and nature in panoramic scene that was considered a radical compositional departure at the time. Although the peaceful scene appears to be effortlessly executed, Durand spent a year painstakingly sketching the hills in upstate New York so every detail, including the native trees and plants, was correct.

Other works on view included 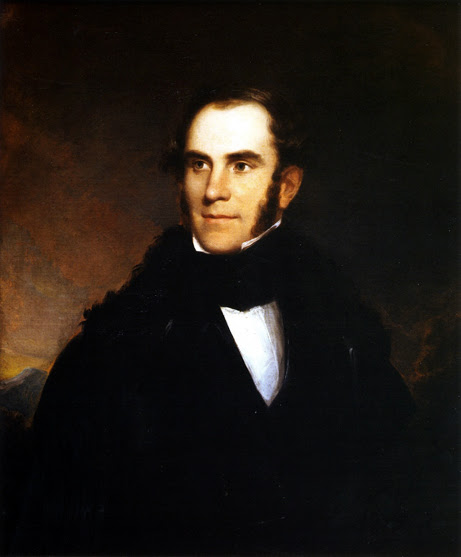 a sensitive portrayal of Cole painted at the peak of Durand’s powers as a portraitist; 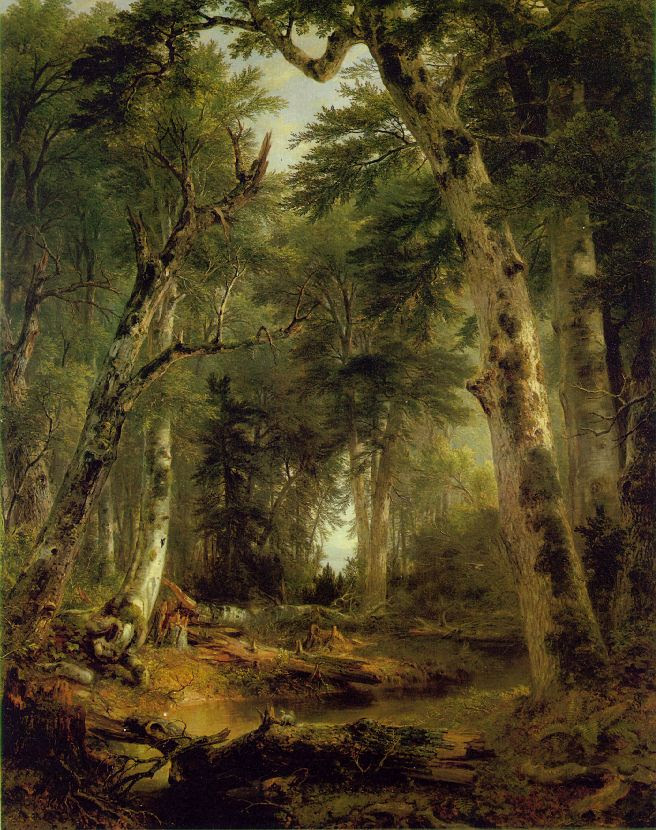 a landmark painting composed from oil studies made in the Shokan region of the Catskills that was intended to evoke the primeval North American forest and represents one of Durand’s most important contributions to the American landscape vocabulary;

a classic panoramic view of the White Mountains that was commissioned by the prominent New York collector Robert L. Stuart;

and a selection of his “Studies from Nature,” featuring vignettes of Durand’s favorite sketching sites.

Durand was born Aug. 21, 1796, in Maplewood (formerly Jefferson Village), N.J. From 1812 to 1820, he was an apprentice, then partner, to an engraver copying English book illustrations. His reputation as a printmaker was established in 1823, when he received wide acclaim for an engraving after John Trumbull’s famous painting “The Declaration of Independence.” This firmly established his reputation as the finest engraver in the United States. In the 1830s, Durand ended his engraving business and entered into a short, successful period as a portrait painter of U.S. presidents and other Americans of political and social prominence.

In 1837, a sketching expedition to the Adirondacks with the artist Thomas Cole, a close friend and mentor, led to Durand’s decision to concentrate on landscape painting. Durand’s subsequent annual summer trips to the Catskill, Adirondack and White Mountains yielded hundreds of drawings and oil sketches that he later incorporated into finished paintings. From 1840 to 1841, he traveled extensively in Europe, studying the old masters and sketching from nature. Durand, who was one of the founders of the National Academy of Design in New York City, served as its second president from 1845 until 1861. In 1855, his influential “Letters on Landscape Painting” were published in the Crayon, an important art periodical founded by the artist’s son, John. Durand, who retired in 1869, stopped painting in 1878 and died Sept. 17, 1886, in his home town of Maplewood, N.J.

From the NY Times:

One of the less dramatic painters of the Hudson River School, Durand (1796-1886) favored the realistic approach to landscape advocated by the English critic John Ruskin, rather than the metaphorical view held by Cole and other Hudson Riverites that its representation ought to express God’s sublimity. Obeying Ruskin’s call for truth to nature, Durand explored forest interiors with close attention to the ways of trees, foliage, rocks and ground cover in smaller paintings, while his larger and more elaborate exhibition pictures, influenced by European masters like Claude Lorrain and John Constable, are Arcadian visions suffused with light, color and atmospheric perspective.

A vibrant example of both approaches is 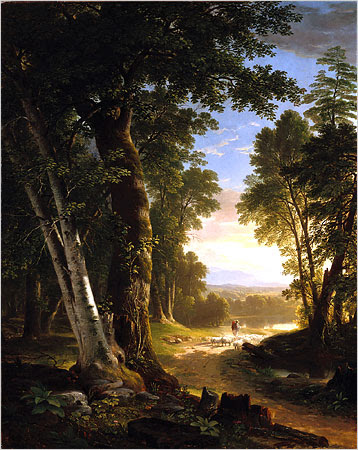 a landscape in a vertical format that was new in his work and probably derived from Constable. A beech and a linden tree, leaning but sturdy and in vigorous leaf, dominate the left foreground. Beside them a rustic path meanders down to a shining pond, which a shepherd and his fleecy flock are nearing. In the distance a range of pale blue hills juts into a bluer but cloud-streaked sky. If it is compositionally similar to Constable’s 1826 canvas “The Cornfield,” never mind. The harmoniously lighted scene, projecting an atmosphere of peace, plenty and all’s right with the world, was warmly received by critics, admired as much for its ambitious scale as for its “every-day character,” as one viewer wrote at the time of its exhibition...

Durand became close friends with Cole, who encouraged his painting ambitions. By 1835, urged on by a patron, the merchant Luman Reed, Durand was painting life portraits of presidents and other prominent figures, and by 1838 had begun to try his hand at landscape. One of these early ventures, whose humor is almost unique in his work, is 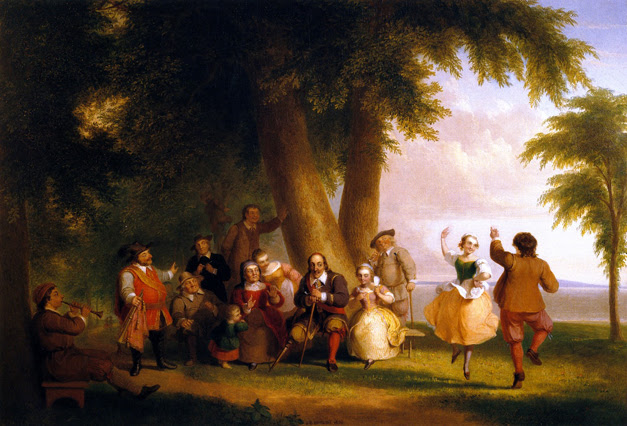 “Dance on the Battery in the Presence of Peter Stuyvesant” (1838),

a kind of fête galante on the order of Watteau, in which Stuyvesant, the peg-legged governor of New York, sits out a merry if rather stiffly painted country dance under sheltering trees.

An 1837 sketching trip with Cole to Schroon Lake in the Adirondacks seemed to fix Durand’s concentration on landscape. His work became stronger after a year in Europe in 1840 to study the old masters with a view to improving his composition and color handling. He became known for his elegant scenic depictions, mostly in the Catskill, Adirondack and White Mountain regions, like 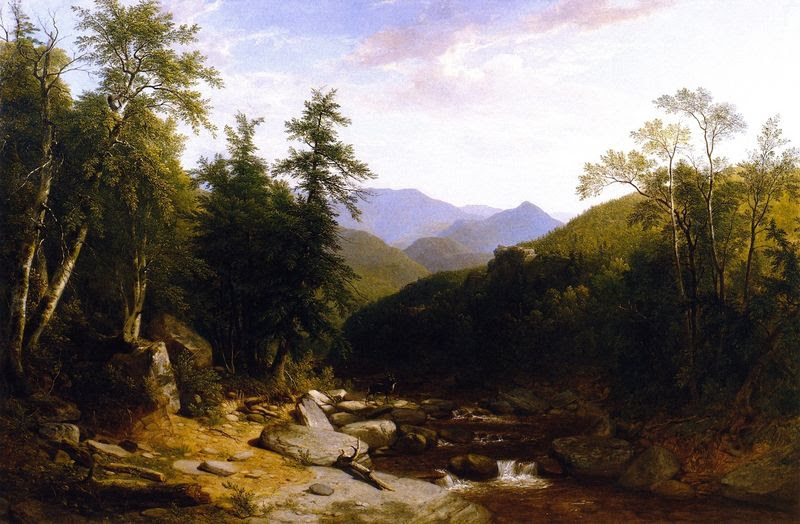 which shows a boulder-filled rivulet running between woodsy mountainsides toward the deep gorge known as the Kaaterskill Clove, with the Catskill range thrusting up in the background. A stag stands poised on a rock in the picture’s center. 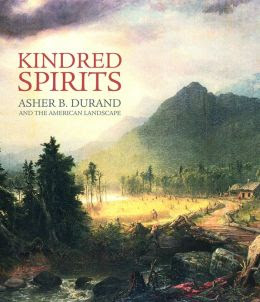 “Kindred Spirits: Asher B. Durand and the American Landscape” was organized by the Brooklyn Museum.


Posted by Jonathan Kantrowitz at 8:17 AM