The Photorealist movement was also associated with sculptors such as Duane Hanson, who recreated the human body with surprising poignancy and accuracy.

Like the Pop artists of the 1950s and 1960s, Photorealists distanced themselves from abstraction and gestural painting by using photo-mechanically reproduced images as source material for their work. Pop artists such as Roy Lichtenstein and Andy Warhol had already depicted images that could be seen on newsstands or on television: advertisements, comic books, and symbols of popular culture like movie stars. Rather than taking on subject matter that was familiar because mass circulation had made it iconic, as the Pop artists had, the Photorealists of the 1970s depicted photographs that were recognizable in their banality—anyone could have taken the snapshots on which the Photorealists based their paintings.

The works in Still Life make a compelling argument that the Photorealists drew on the legacies of 1960s Pop art and nineteenth-century Realism to picture life in the 1970s, in depictions that are grittier than has previously been acknowledged in exhibitions of Photorealism. Their works appear newly relevant as photography’s ability to capture or provide access to “the real” continues to develop in unanticipated ways, now mediated primarily by technological devices and smart-phone screens rather than photographic prints. 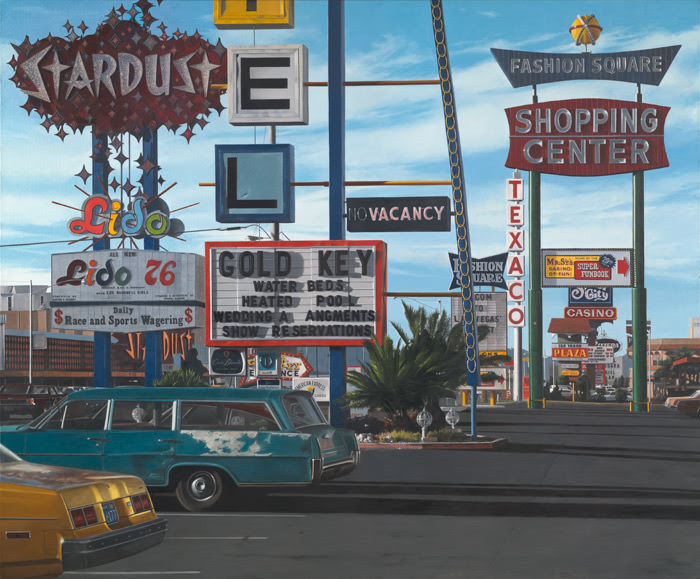 Among the Photorealists, John Baeder is remarkable for his dedication to a single subject: the exteriors of roadside cafés and diners. Most of his paintings are based on 1970s photographs of historic diners from the first half of the twentieth century. Baeder was inspired by the realist photographers of the Farm Security Administration, who documented everyday American life from the mid-1930s to the 1940s. In a similar vein, Baeder’s source for this painting was a photograph from the 1940s given to him by the diner historian and preservationist Richard J. S. Gutman. Because the source photograph was black and white, Baeder painted in grayscale. He wrote that Highway Diner was, for him, “a way of preserving the picture rather than the diner.” 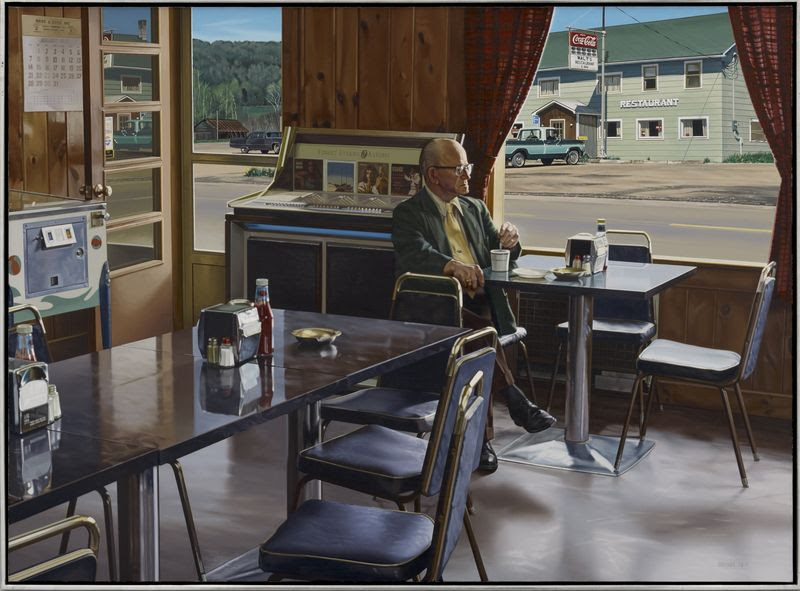 This painting represents a familiar, even ordinary subject: an older man lingering over coffee in a diner. Many Photorealists reflected the influence of Edward Hopper by depicting the culture of roadside diners and isolated figures within them. Goings was dedicated to representing working-class subjects and aspects of consumer culture not normally the subject of large-scale oil painting. Here, he complicates the apparent simplicity of his subject by focusing his camera outside the diner’s window, on the sign across the street. As a result, the majority of Goings’s painting is out of focus, reminding viewers that we are looking at a painting of a photograph.

The work of John Clem Clarke differs from that of any other artist represented in this exhibition. His subject is not a snapshot of contemporary life but a photograph of a famous still-life painting by Juan Sánchez Cotán (ca. 1602, San Diego Museum of Art). Clarke’s artistic process is also distinct from that of his contemporaries. In the 1960s and 1970s, he often revisited famous historical paintings, sometimes restaging them as tableaux that he then photographed, using the results as the basis for new paintings. Here, he used overlapping layers of pochoir oil paint to reimagine and even abstract Cotán’s highly realistic painting. Despite a painting style that was looser than that of the other Photorealists, Clarke’s subjects were, nonetheless, photographs. He included white frames around most of his works from the period, mimicking the borders of old postcards and photographs to indicate that the paintings were copies of images of great artworks rather than copies of the paintings themselves.

Richard McLean began his career in the 1950s, as an abstract painter. In the 1960s, Pop art inspired him to move away from abstraction, and by the 1970s, he had made a name for himself as a painter of highly realistic images of the American West. McLean found horse shows and rodeos in California to be incredibly rich subjects. Images of horses can be found in the most ancient cave paintings and were staples of eighteenth-century Naturalist painters like George Stubbs and nineteenth-century Realists such as Rosa Bonheur. McLean is particularly interested in providing a contemporary, unromanticized view of subjects otherwise laden with historical connotations. Although he often represents the pageantry of show horses and their owners, as in his print on view elsewhere in the exhibition, he sometimes presents an isolated animal as if it were the subject of a still life. 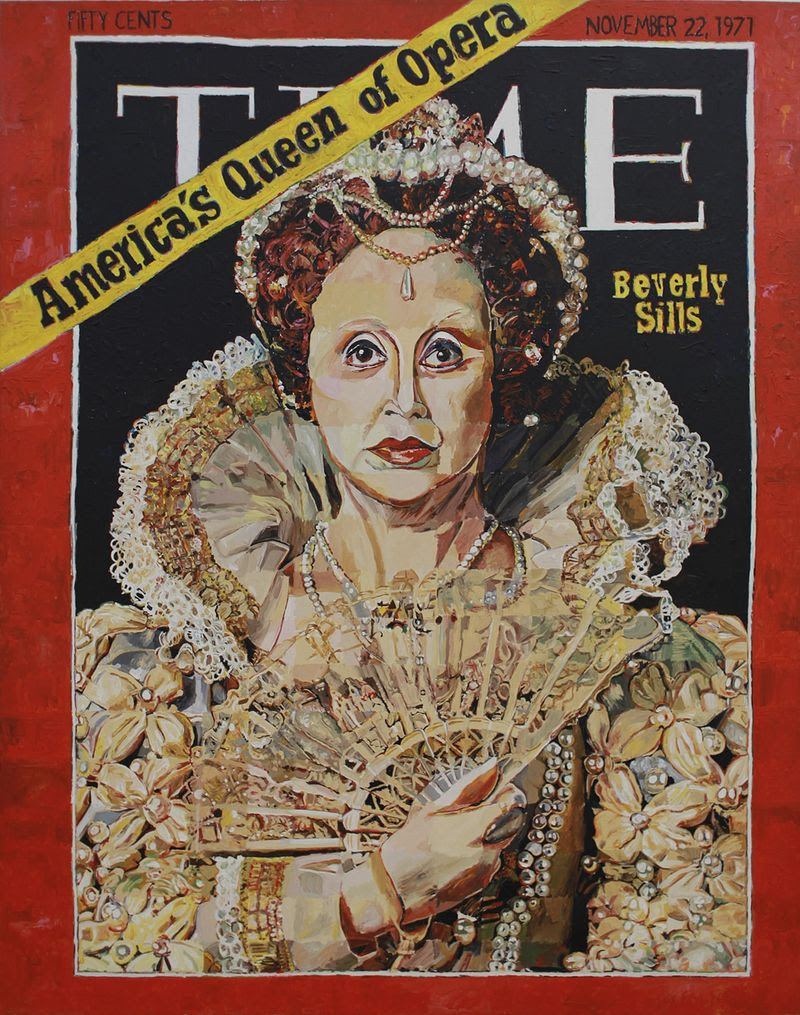 Malcolm Morley is often considered the first artist to have worked in a Photorealist style. As early as 1965, he made an unexpectedly realistic painting of a postcard, and throughout the late 1960s and early 1970s his paintings were based on printed photographic images. He rendered some of these with illusionistic detail, creating works that could trick the viewer’s eye. In others, such as America’s Queen of Opera, based on a Time magazine cover story about the opera singer Beverly Sills, Morley lets viewers see how he made photographic images into paintings: by overlaying the photograph with a grid and then transferring the image to the canvas, square by square. This work both illustrates the transformation of a popular image into a painting and breaks down photographic illusion. 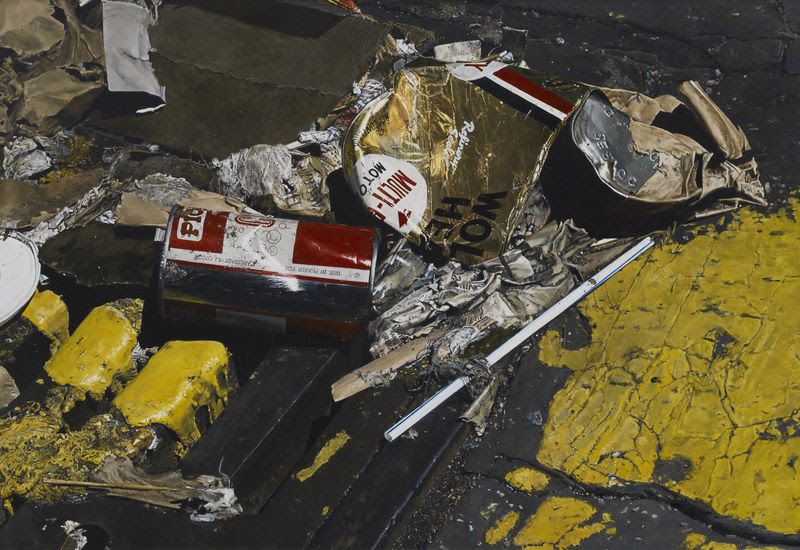 From the beginning of her career as a Pop artist in the 1960s, Idelle Weber was fascinated with the language and codified signs found in mass-market publicity. Her silhouette paintings of figures in the 1950s represent the fixed gender roles frequently depicted in advertising. In the early 1970s, Weber began taking her own photographs, often of fruit stands and trash, which became the subjects of her subsequent Photorealist paintings. In these works, advertising slogans, logos, and labels are often faded, dirty, and broken, yet one can still find visual associations between the objects and the accidental poetry and puns in their texts.

Working in an extraordinarily realistic style, John DeAndrea makes sculptures that often trick the eye. To create Lissa Pregnant, DeAndrea took a series of casts of his then-wife when she was pregnant with the couple’s son. He combined the casts to make a complete human form, then toned the surface with pigments that imitated her skin, veins, and even goosebumps. He then added eyelashes, hair, and props like her clothing and the chair. This exhausted mother-to-be has none of the idealism we associate with life-sized portrait sculptures—such as statues of historical figures that are often found in town squares. Instead, the sitter is surprisingly lifelike. The detail of DeAndrea’s technique draws our attention, but it is the frank humanity of the sitter that elicits our sympathy.

Audrey Flack’s virtuosic still life references the seventeenth-century Dutch tradition of vanitas painting. In such works, the fugitive nature of life and all its pleasures is captured in objects, such as beautiful flowers and fruits juxtaposed with rotting versions of the same, as well as soap bubbles, insects, musical instruments, and skulls. Flack’s still life includes flowers, fruit, a skull-shaped match holder, a bird figurine, a cicada, and a small, clock-shaped bank. This final item, a trinket from a bank, is inscribed with the titular admonition—“Time to Save,” a seemingly benign reminder that here takes on life-and-death implications. Flack’s own photographs of her arrangement served as the source material for this painting, which deploys Photorealist techniques while reconsidering the subject matter of the Old Masters. A seventeenth-century vanitas painting by Jacques de Gheyn the Elder (inv. no. 1957.36) can be seen in the European galleries, on the second floor.

Also in the exhibit: 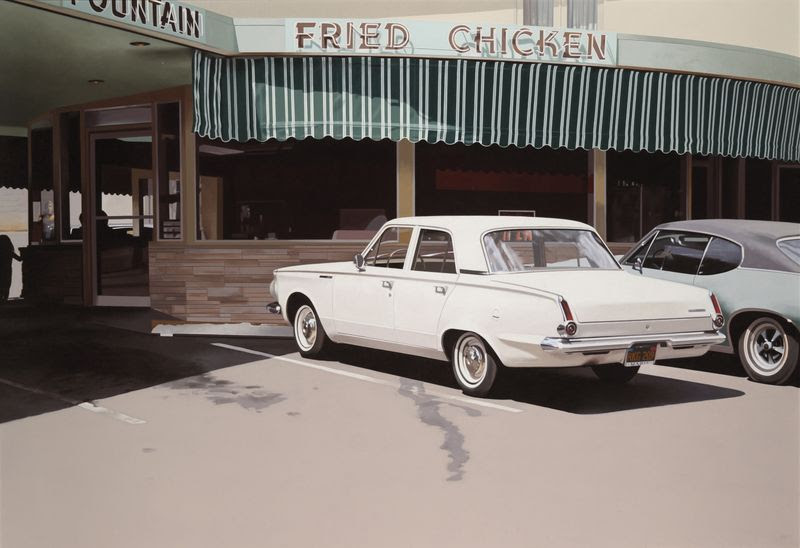 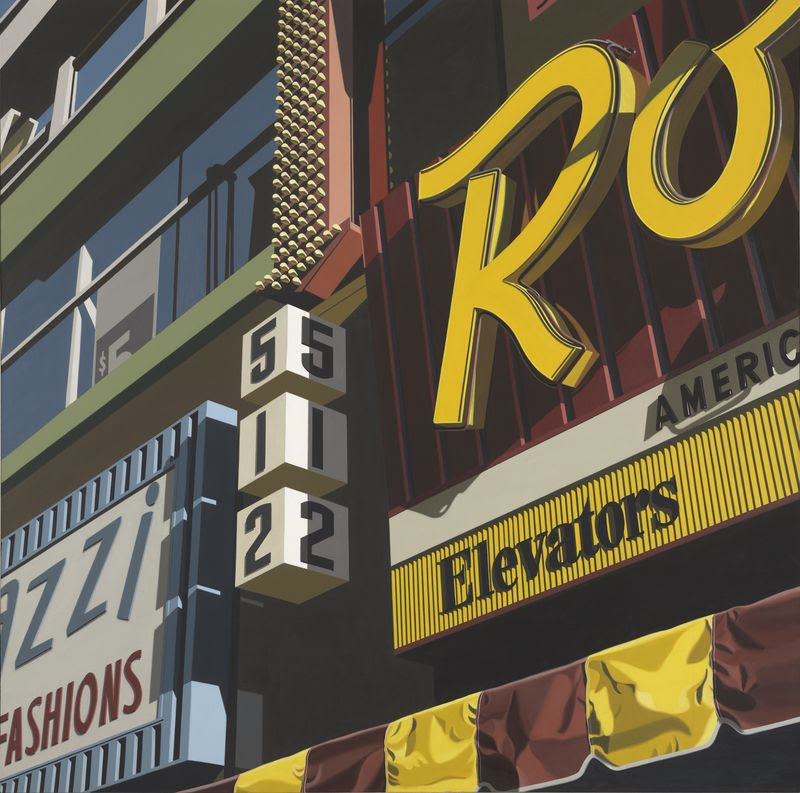 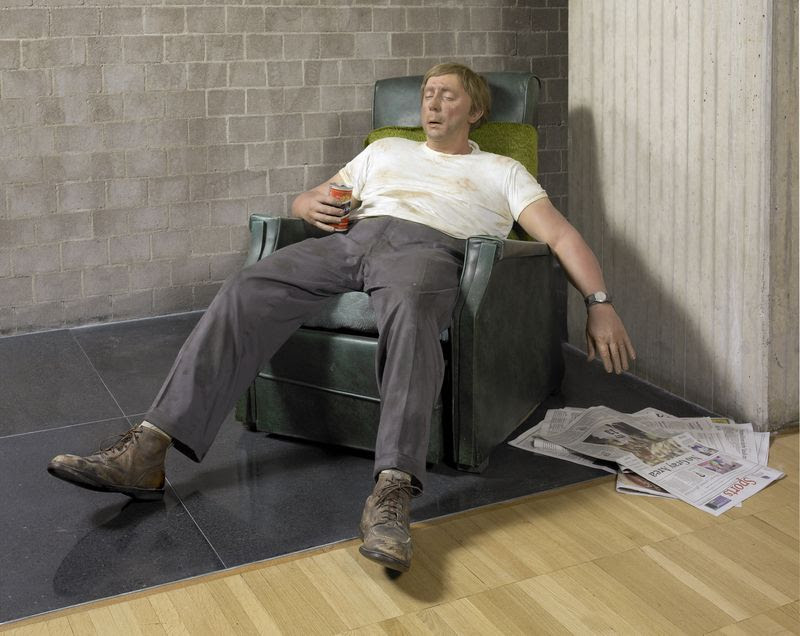 Man in Chair with Beer

Cab, from the Westford Series 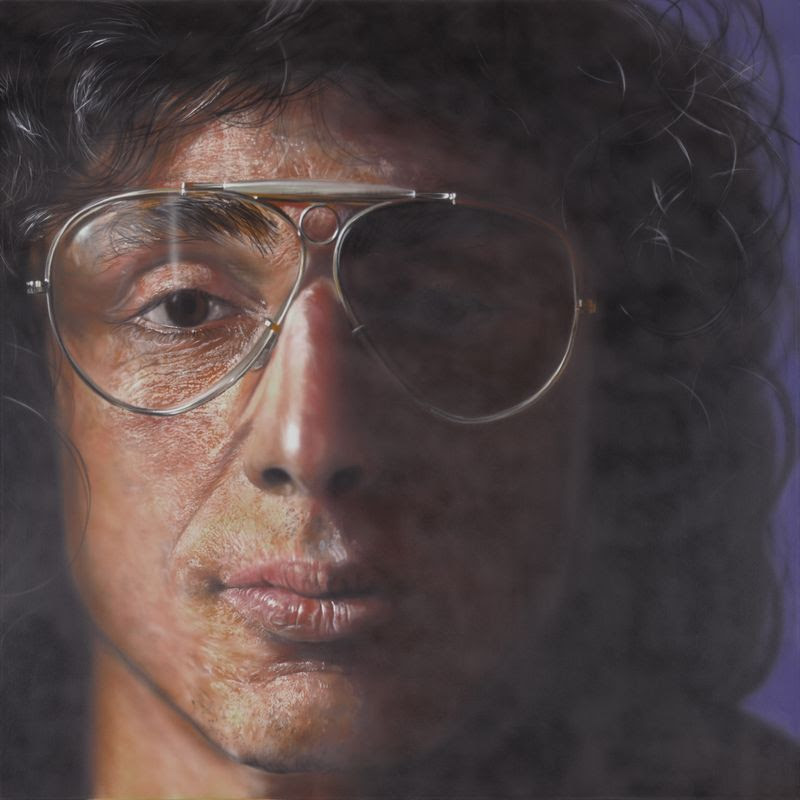 Lent by the artist

(All objects below are lithographs, Gift of Dr. and Mrs. Samuel S. Mandel, m.d.) 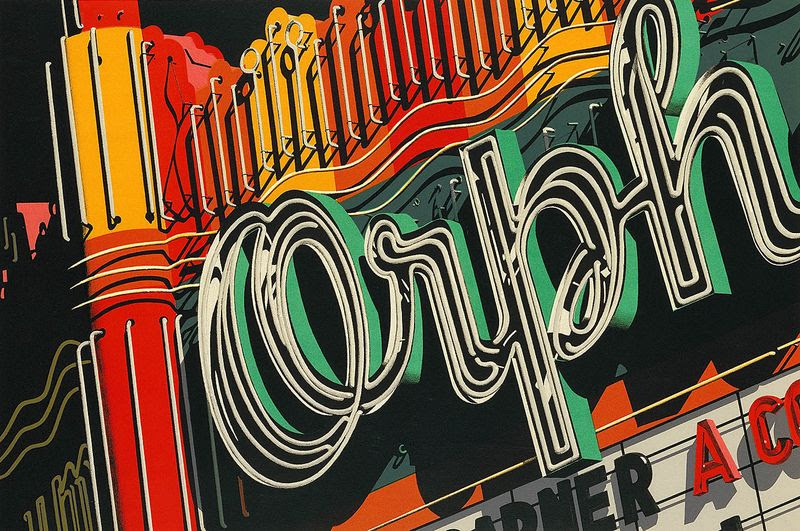 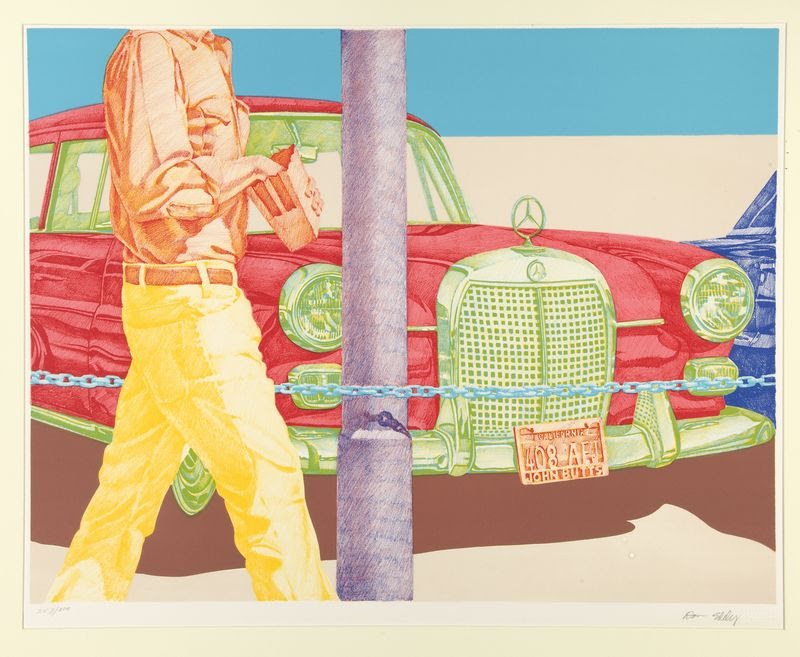 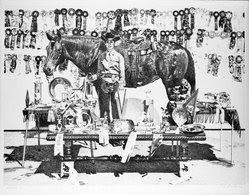 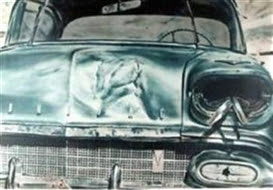 Posted by Jonathan Kantrowitz at 12:17 PM