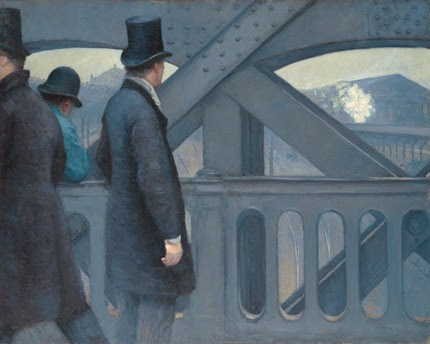 Gustave Caillebotte, On the Pont de l’Europe, 1876-1877
oil on canvas
Kimbell Art Museum, Fort Worth, Texas
Fifty of the most important and beloved paintings of Paris and its environs by impressionist Gustave Caillebotte (1848–1894) will be the focus of the first major U.S. exhibition of the artist's work in 20 years. On view in the West Building of the National Gallery of Art, Washington, from June 28 through October 4, 2015, Gustave Caillebotte: The Painter's Eye will provide visitors with a better understanding of Caillebotte's artistic character and the complexity of his contribution to modernist painting.
"Caillebotte's paintings were inaccessible for almost a century, and they are still hard to come by in public institutions. For those interested in his work, there is no place to go to get a deep or broad sense of his achievement. We are thrilled to present this exhibition and accompanying publication to a new generation of art lovers and those hungry for another peek at his best works," said Earl A. Powell III, director, National Gallery of Art.
After Washington, Gustave Caillebotte: The Painter's Eye will be on view at the Kimbell Art Museum in Fort Worth, Texas, from November 8, 2015, through February 14, 2016.
The exhibition is organized by the National Gallery of Art, Washington, and the Kimbell Art Museum, Fort Worth
Exhibition Highlights
From spectacular images of the new public spaces designed under Napoleon III by his prefect Baron Haussmann to visual meditations on leisure-time activities in and around Paris, the works presented will be lent by private collections and a small number of institutions in Europe and the United States.
Organized thematically, the exhibition showcases Caillebotte's fascination with the contemporary lifestyle of the Parisian bourgeoisie, from depictions of interior life, portraits, and still lifes, to urban street views and idyllic river scenes. Many of the works on view were completed between 1875 and 1885, the period in which Caillebotte was most involved with the impressionist movement.
Caillebotte sought to depict contemporary home life in the French capital, such as interior vantage points and views from the inside looking out. The exhibition opens with scenes of work and play set in bourgeois interiors, including 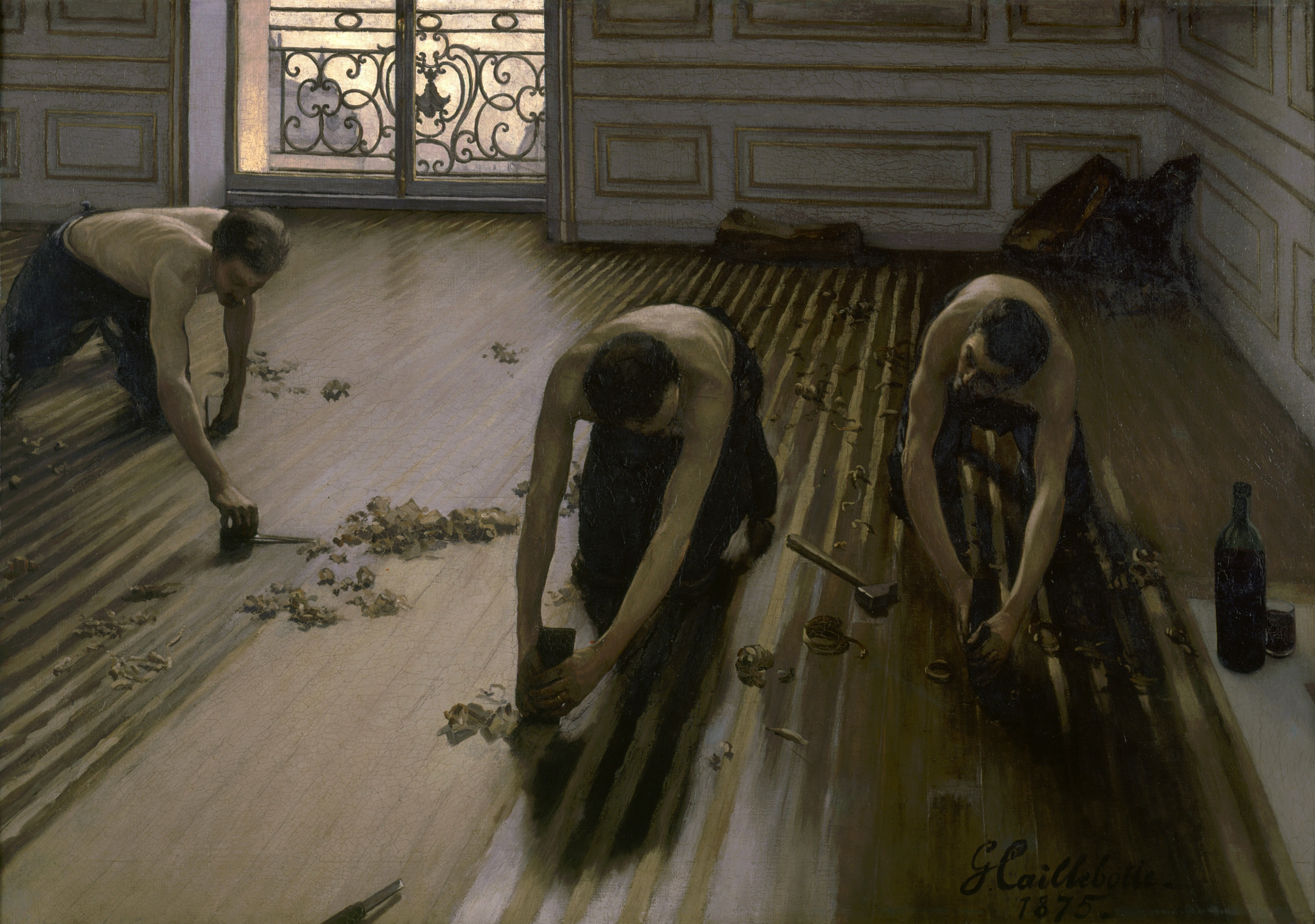 and his first important painting The Floor Scrapers (1875, Musée d'Orsay).

Views from balconies of the new buildings that were part of Haussmann's building project were of particular interest to Caillebotte, including and Interior, Woman at the Window (1880, Private Collection),

a view from inside an apartment looking out.
Street views of Paris as revitalized by Haussmann are Caillebotte's most renowned works, including

Paris Street, Rainy Day (1877, The Art Institute of Chicago) and 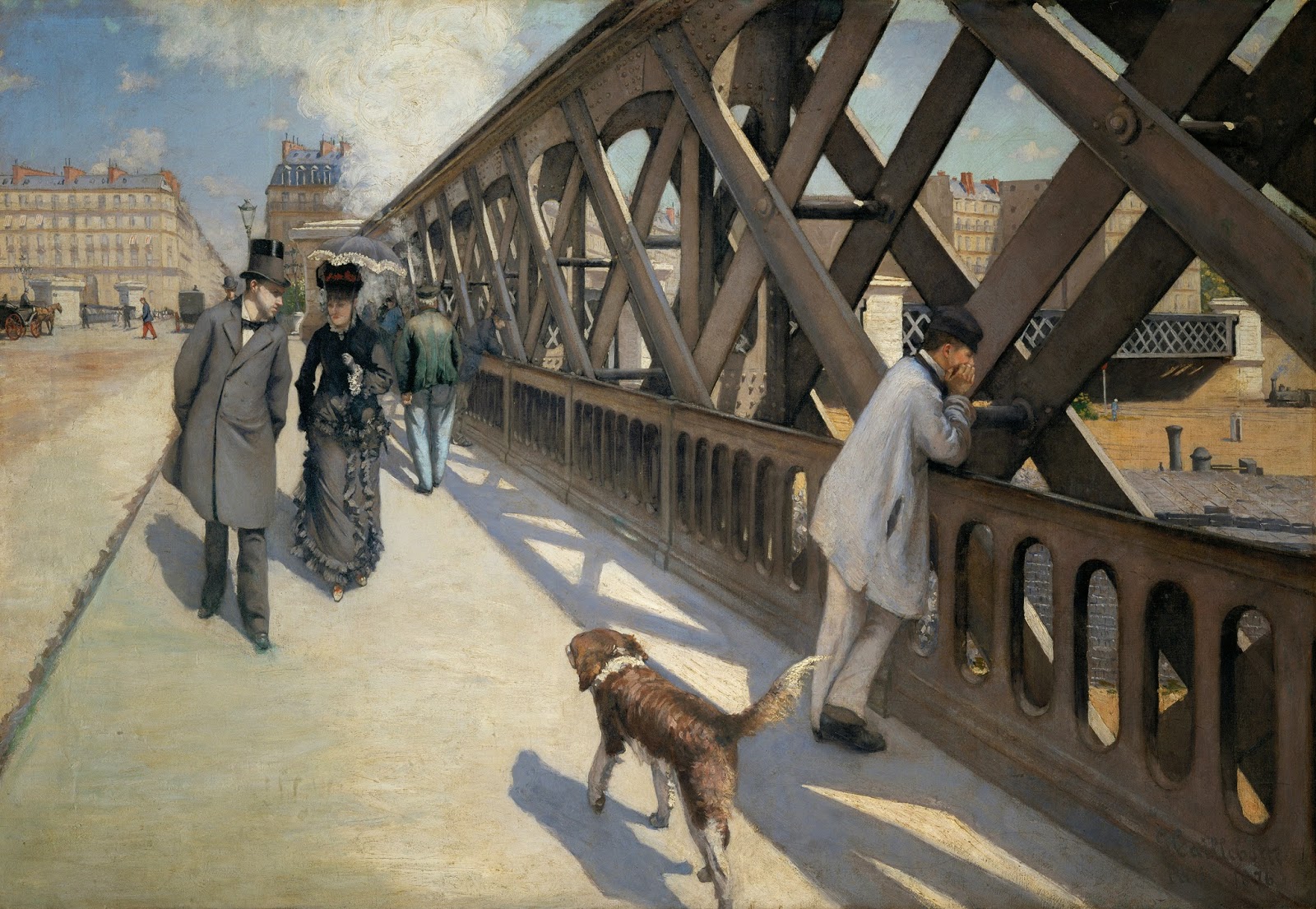 both of which were included at the impressionist exhibition of 1877.
"Caillebotte grew up in the destruction/construction zone of the 8th arrondissement in Paris, one of the new neighborhoods built during Napoleon III's massive urban renewal project of the 1850s and 1860s. His response to the modern city was quite personal and there is something in his aesthetic that speaks directly to 21st-century urban dwellers," said Mary Morton, exhibition curator and head of French paintings, National Gallery of Art.
Two of Caillebotte's most provocative works—Man at His Bath (1884, Museum of Fine Arts, Boston) and Nude on a Couch (1880, The Minneapolis Institute of Arts)—were on view alongside individual portraits of the artist's friends, such as Portrait of Eugéne Daufresne (1878, Private Collection) and Portrait of Richard Gallo (1881, Private Collection). Two rarely seen self-portraits from private collections are also included.
Caillebotte's still-life paintings are potentially the most revelatory to visitors, from traditional images of dead birds and game The exhibition concludes with a section on suburban pleasures. River scenes and landscape views—popular themes of the impressionists—include 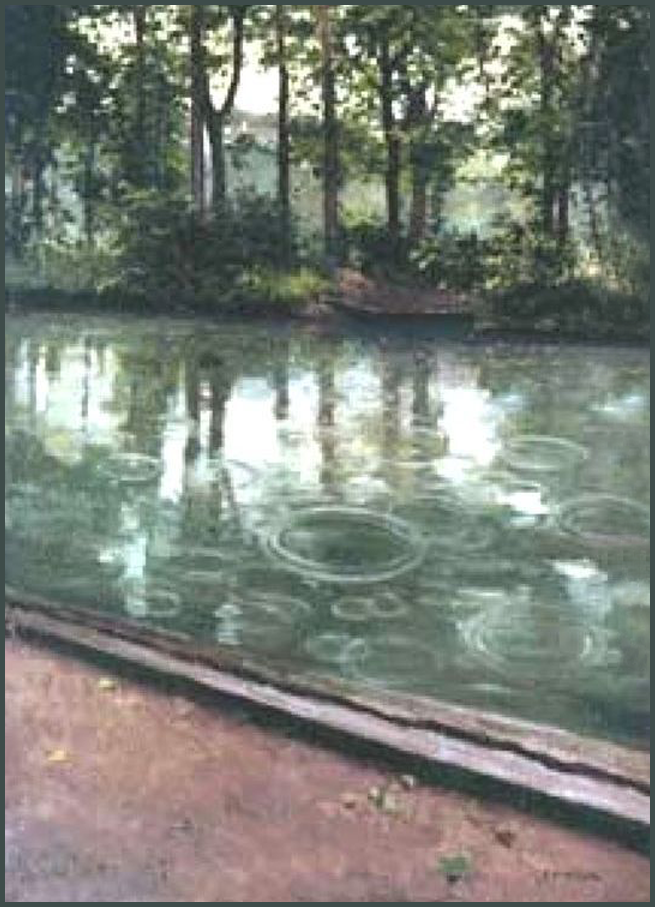 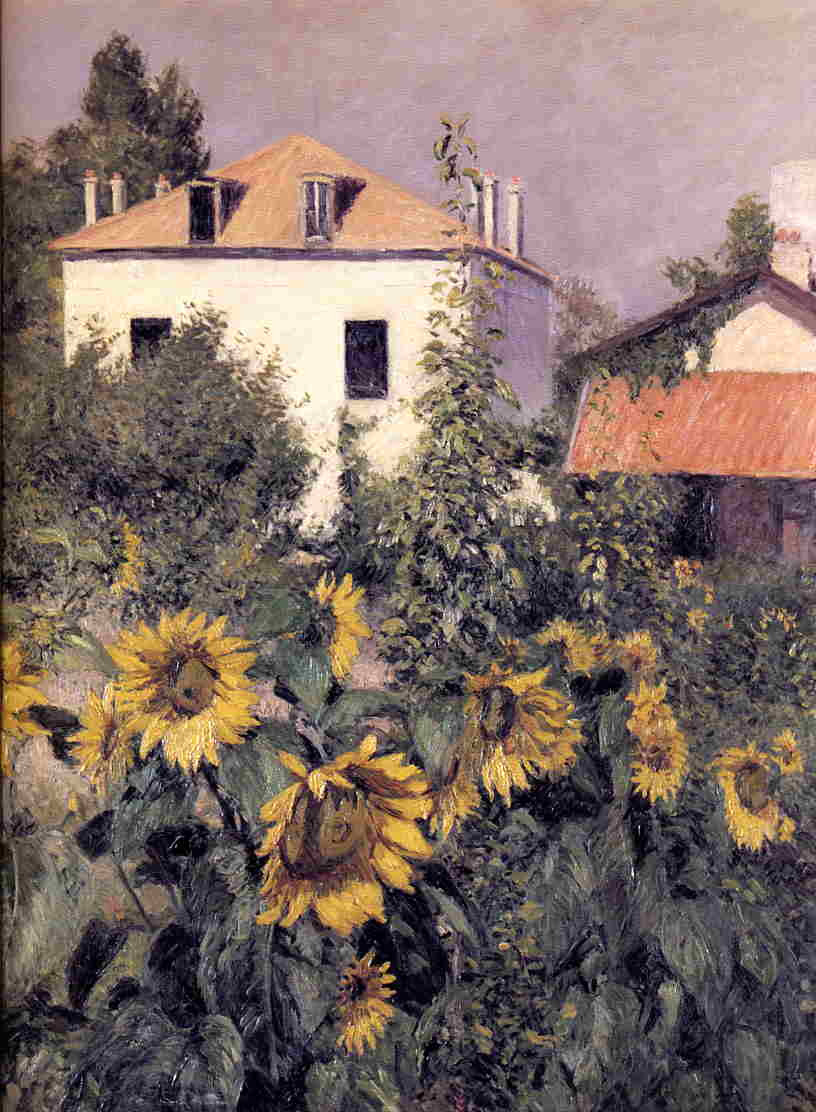 and Sunflowers, Garden at Petit Gennevilliers (c. 1885, Private Collection).
Gustave Caillebotte (1848–1894)
Although Caillebotte is widely recognized as the painter of a small number of iconic works—particularly The Pont de l'Europe and Paris Street, Rainy Day—and sometimes given more credit as a collector and supporter of the arts, his breadth or depth as a critical impressionist artist is not generally known by the American public.
Caillebotte was a unique player in the impressionist movement and his work was out of public view for almost a century, remaining in private collections. Born into a wealthy Parisian upper middle-class family, Caillebotte obtained a law degree and was a veteran of the Franco-Prussian War. He joined Léon Bonnat's studio and passed the entrance exam for the Ecole des Beaux-Arts in 1873, but his participation was minimal.
He was attracted by the innovative spirit of the artists who were to become known as the impressionists. Originally invited by Edgar Degas to participate in the first impressionist exhibition in 1874, Caillebotte did not join the group until 1876, at Auguste Renoir's invitation. Caillebotte was one of the regular participants in the group's exhibitions (1877, 1879, 1880, and 1882), and he organized the 1877 presentation. Having inherited a large fortune from his parents, Caillebotte had no need to sell his own paintings and could focus on collecting the work of his artist-friends instead.
Caillebotte died young and his bequest left a collection of 69 impressionist masterpieces to the French government. The will was contested by his heirs, a compromise was reached, and 38 impressionist masterpieces were accessioned by the government and currently reside at the Musée d'Orsay in Paris. The rest of his paintings—more than 400 works—remain in the collection of his family.
Exhibition Curators and Catalog
The exhibition is curated by Mary Morton, curator and head of French paintings, National Gallery of Art, and George Shackelford, deputy director, Kimbell Art Museum.
Copublished by the National Gallery of Art and University of Chicago Press, the fully illustrated scholarly catalog includes essays written by experts in their fields on the role in his work in photography; nontraditional, nearly cinematic perspective systems; his teacher Léon Bonnat; contemporary social and political history; class and sexual identity; and contemporary painting, literature, and criticism.

Posted by Jonathan Kantrowitz at 8:41 AM