“The Artistic Journey of Yasuo Kuniyoshi” is the first comprehensive overview of the artist’s work by aU.S. museum in more than 65years.The exhibition is a selective survey that will trace Kuniyoshi’s career though 66 of his finest paintings and drawings chosen from leading public and private collections in America and Japan. Most of the works from Japanese collections have not been exhibited in the U.S. for more than 25 years.

“The Artistic Journey of Yasuo Kuniyoshi” is co-curated by Joann Moser, deputy chief curator at the Smithsonian American Art Museum and Tom Wolf, a Kuniyoshi scholar and professor of art history at Bard College.

The exhibition will be on view from April 3 through Aug. 30; he Smithsonian American Art Museumis the only venue.

“Kuniyoshi remains one of our country’s most important and innovativemodern artists, yet his work has not been widely exhibited for decades,”said Betsy Broun, The Margaret and Terry Stent Director of the Smithsonian American Art Museum. ”Kuniyoshi rose to prominence in the New York art world during the 1920s to become one of the most esteemed modernist artists in America between the two world wars, celebrated alongside artists such as Edward Hopper, Georgia O’Keeffe and Stuart Davis. During the course of his career his style ranged from deadpan humor toerotic sensuality to deep tragedy.

“The evolution of Kuniyoshi’s art from his slyly humorous works in the 1920s, through his sensual and worldly paintings of the 1930s, to the darker works of his last years is a deeply human story,and the opportunity to see it in all its complexity and visual eloquenceis a rewarding one,” said Wolf. "Kuniyoshi defined himself as an American artist while at the same time remaining very aware that his Japanese origins played an important role in his identity and artistic practices. He drew on American folk art, Japanese design and iconography and European modernism to create a sophisticated, distinctive mode of expression that integrated Eastern and Western styles. His inventive works often included subtle color harmonies, simplified shapes, oddly proportioned figures and an eccentric handling of space and scale."

“Kuniyoshi’s art—subtle and sophisticated, idiosyncratic and unique—defies easy categorization,” said Moser. “His paintings reveal a story of aspirations, disappointments, a striving for meaning and a place as an immigrant in America.”

Kuniyoshi (1889–1953) was a photographer and printmaker as well as a painter. He was born in Japan and came to the United States as a teenager, studying art in New York Cityin the Independent School and the Art Students League.He went on to teach at the Art Students League, to exhibit in prestigious exhibitions in the U.S. and abroad and to win major awards; among numerous other accolades he won first prize at the Carnegie International exhibition in 1944, was honored with the first retrospective exhibition of work by a living artist at the Whitney Museumin 1948 and exhibited at the Venice Biennale in 1952.

He was active in politics in New York and was a member of several important artistic circles. His success, however, was shadowed by his immigrant status; though he was thoroughly integrated into American society and considered himself American, immigration law prevented him from becoming a citizen. During WWII Kuniyoshi remained steadfastly loyal to the United States and put his talents to work as a poster artist to support the war effort; despite this, the U.S. government declared him to be an “enemy alien” in the wake of the attack on Pearl Harbor, and he faced increasing prejudice and harassment. Kuniyoshi remained active and influential in artist circles and continued to paint and teach until his death in 1953.

“The Artistic Journey of Yasuo Kuniyoshi” is accompanied by a catalog with an essay on Kuniyoshi by Wolfand an introduction by Broun. It is published by the Smithsonian American Art Museum in association with D Giles, Ltd. ...One of many Kuniyoshi quirks is his use of strangely surreal bowls, plates and tabletops to frame the otherwise meticulously rendered objects of still life. In a 1925 drawing, “Orange,” the delicately shaded fruit is rendered off center on a tabletop that on one side is reduced to a single bare line, while on the other is shaded and three-dimensional. Kuniyoshi is a virtuoso at creating dynamic tension between flat and perspectival space, and the effect visually is often rather like the haunting slippage between diatonic and chromatic tonality in the music of the same period...

A 1924 self-portrait greets visitors with a quick blast of the artist’s humor and playful provocation. This first painting is somewhat out of sequence, but it makes perfect sense as an invitation to explore. It shows the artist working as a photographer, his head draped in a dark cloth. But one arm is also raised like a fencer’s, and the other seems to be holding a sword or epee, if one uses a little imagination to connect the lower edge of a window or picture frame to the painter’s hand. It shows us the artist en garde, taking a playfully defensive stance, engaging the viewer in a back-and-forth of incisive imagery that never quite yields to a lasting or certain interpretation. More images  from the exhibition: 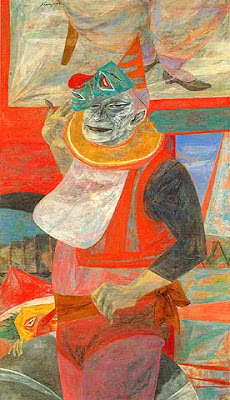 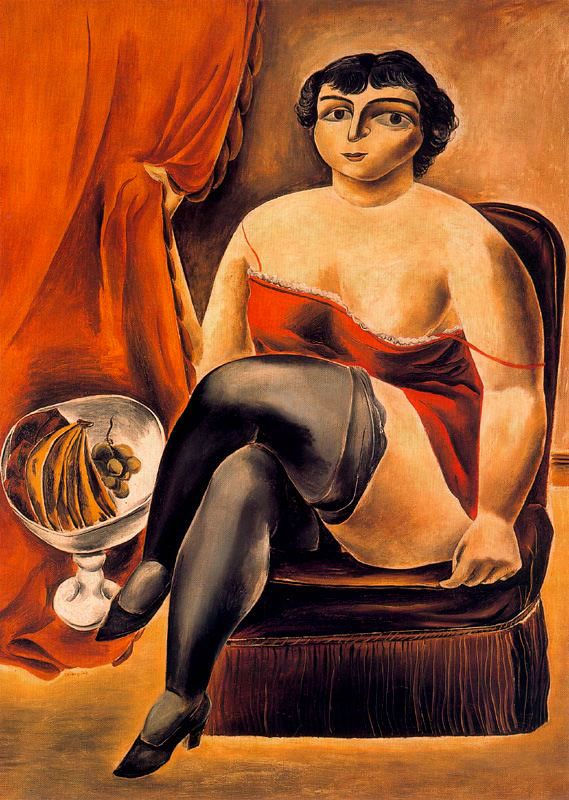 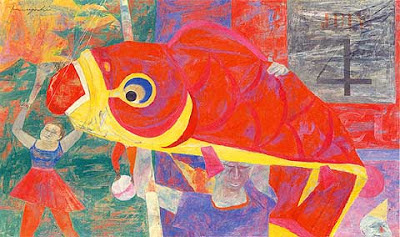 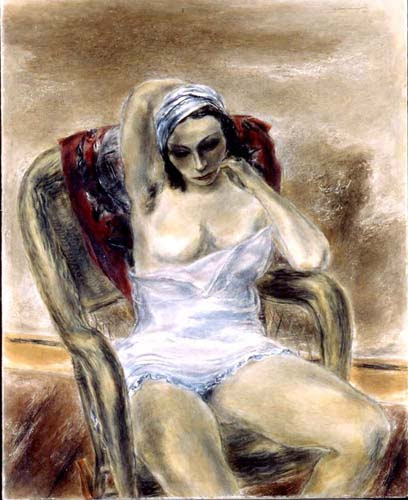 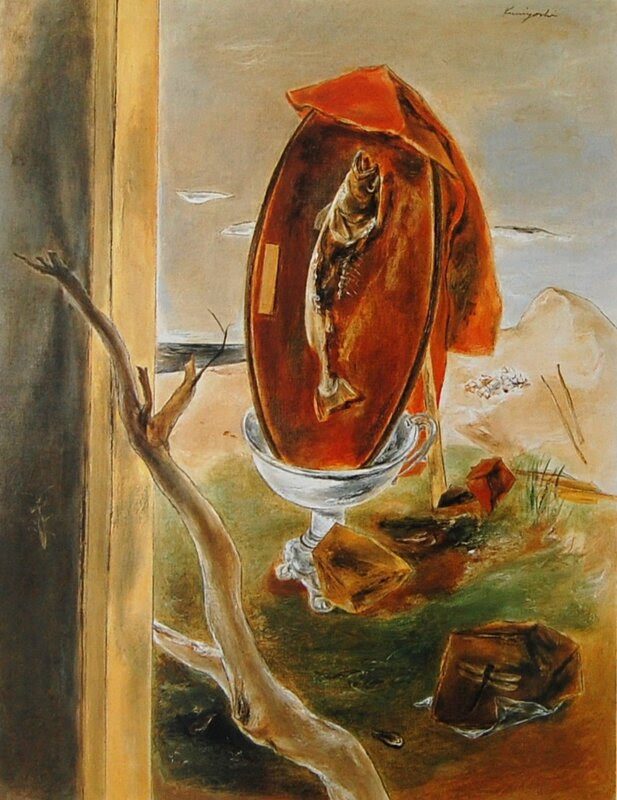 Rotting on the Shore, 1945 Oil on canvas 46x 36inches Norton Museum of Art 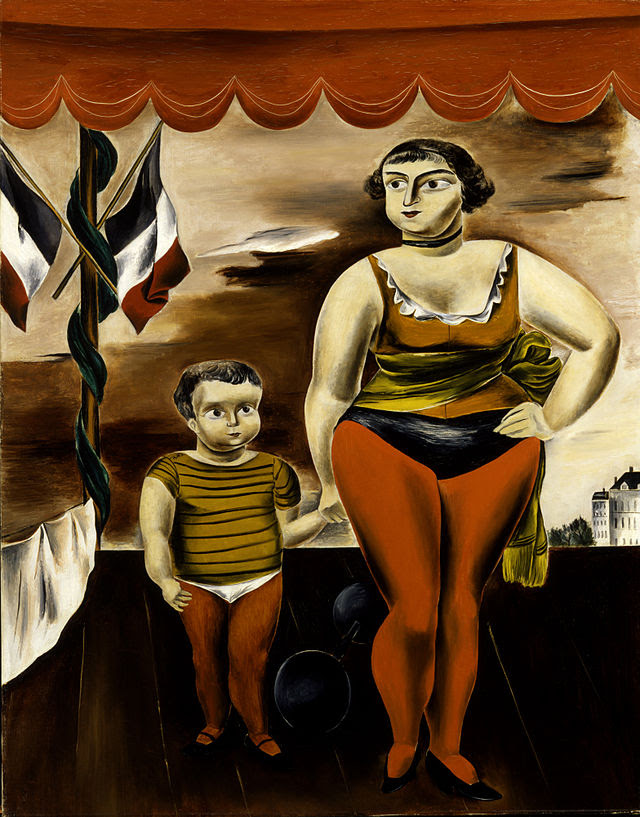 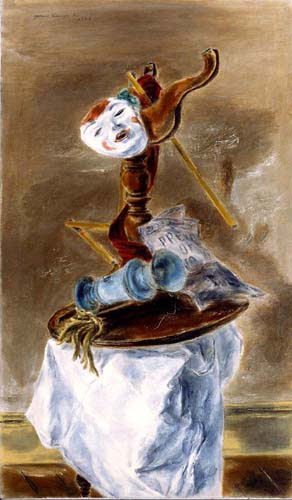 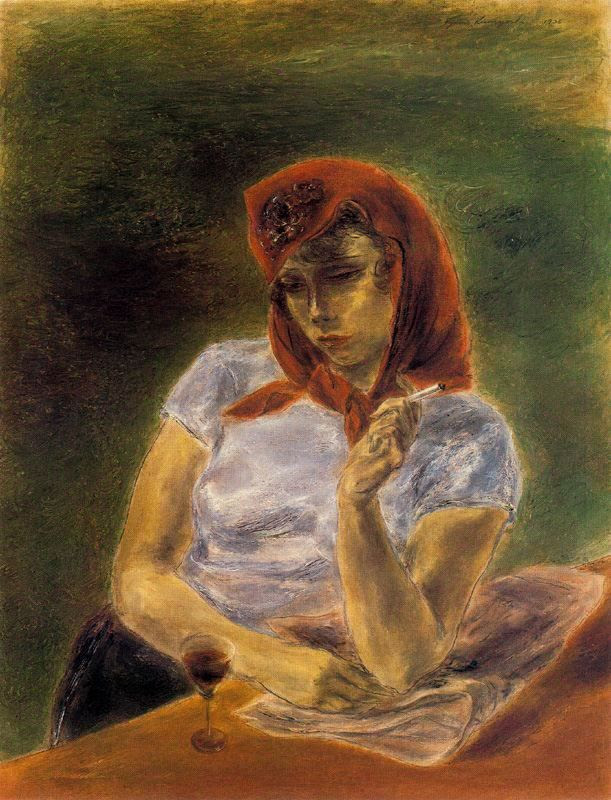 Posted by Jonathan Kantrowitz at 9:42 AM