Golden: Dutch and Flemish Masterworks from the Rose-Marie and Eijk van Otterloo Collection

The Mauritshuis, The Hague, 4 November 2010 to 30 January 2011 "Made in Holland: Old Masters from a private collection in America"

A selection of highlights from the remarkable art collection of Eijk and Rose-Marie de Mol van Otterloo was on display at the Mauritshuis in The Hague in 2011. The exhibition Made in Holland: Old Masters from a private collection in America featured 44 masterpieces produced by Dutch masters during the Golden Age. Not only are these works of outstanding quality, their subject matter is often intriguing. The selection included works by Rembrandt, Frans Hals, Paulus Potter, Jan Steen and Hendrick Avercamp.

History of a Collection

Dutch collectors Eijk and Rose-Marie de Mol van Otterloo, started collecting after their marriage in 1974, initially acquiring antique carriages and English sporting prints. Peter Sutton, current director of the Bruce Museum in Greenwich, Connecticut, suggested that they collect works by seventeenth-century Dutch masters. Simon Levie (advisor from 1995), former director of the Rijksmuseum in Amsterdam, and Frits Duparc, former director of the Mauritshuis (who took over from Levie in 2009), were closely involved in shaping this exceptionally beautiful collection.

Paintings of extraordinarily high quality continue to be added, such as Rembrandt’s Portrait of Aeltje Uylenburg: 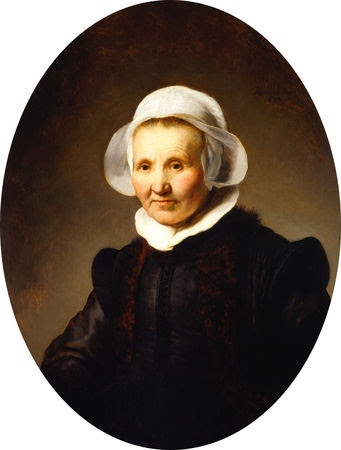 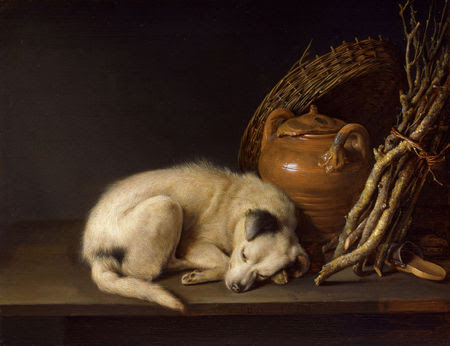 A pretty, yet insolent young girl, a dog sleeping peacefully, winter landscapes or a summer scene with shepherds and picturesque mountains: the pictures in Made in Holland illustrate the versatility of seventeenth-century Dutch painting. In the exhibition, first-rate paintings will be grouped in ensembles, with an emphasis on still lifes, landscapes, genre paintings and portraits.

Among the still lifes, a number of rare works by painters from Middelburg, including Balthasar van der Ast, Ambrosius Bosschaert and Adrian Coorte, are of particular interest. These will be shown alongside works by famous still-life painters such as Jan Davidsz de Heem and Willem Heda.

The Dutch landscape is well represented with, among others, three works by the leading landscape artist of the Golden Age, Jacob van Ruisdael. The work of Nicolaes Berchem, Jan Both, Karel du Jardin and Adam Pijnacker focuses on the Italian landscape.

In the portraits section, masterpieces by Rembrandt and Frans Hals stood out, while everyday life took center stage in the work of painters such as Jan Steen, Nicolaes Maes, Adriaen van Ostade and Frans van Mieris the Elder. An unexpected highlight was the painting Orpheus Charming the Animals (c. 1640), an early work by Aelbert Cuyp: 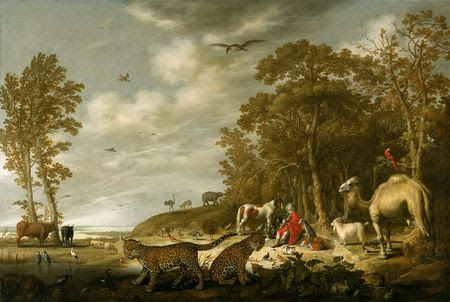 
In 2011, the complete collection of paintings, together with a smaller collection of antique furniture and objets d’art, went on display in the Peabody Essex Museum in Salem, Massachusetts. The exhibition then moved to the Fine Arts Museums of San Francisco and finally to the Museum of Fine Arts in Houston.

The 68 exquisite paintings in the Van Otterloo collection - portraits, still lifes, landscapes, history paintings, maritime scenes, city profiles and genre scenes - were created in the 1600s as the Dutch Republic increased in maritime strength and dominated international trade.  Elsewhere in Europe, the nobility and the Catholic Church were the principal patrons of the arts, but in the Netherlands, merchants supported artists in unprecedented numbers. Corrigan notes that "the creative revival and widespread patronage of the arts in the Netherlands was by no means limited to paintings. Master craftsmen created works in silver, wood and mother-of-pearl that were equally prized by their collectors." The exhibition also features twenty-three examples of furniture and decorative arts from the Van Otterloo collection.  All of these works graced domestic spaces in the Netherlands as people began to invest enthusiastically in fine art and welcome it into their homes.

Eijk van Otterloo was born in the Netherlands and Rose-Marie in Belgium. They met and married in the United States, where they developed deep ties with New England. The couple enjoys living with their collection, but they are also dedicated to sharing it with others, generously lending to institutions around the globe. The Van Otterloos have said, "With Golden, we are delighted to have this opportunity to share the entire collection with the American public. Within these works of art lie a world of beauty, meaning and even humor. We hope that visitors to the exhibition receive as much pleasure, inspiration and delight from them as we do."
Over the last two decades, the Van Otterloos have assembled a Dutch and Flemish collection reflecting their cultural heritage and rivaling any of its kind in the world. With expert guidance from Dr. Simon Levie, former director of the Rijksmuseum in Amsterdam, and Dr. Frederik J. Duparc, former director of the Mauritshuis in The Hague, the Van Otterloos established clear goals and criteria, making the choices - sometimes to acquire, sometimes to decline or sell- that hone a connoisseur's discerning eye.


Great works of art transcend categorization, but to provide context for the vast flowering of Dutch and Flemish art in the Golden Age, the exhibition is organized to reflect the principal themes that artists explored in this period.

Dawn of the Golden Age

Lured by religious freedom and a better economic climate, many artists fled northward from cities such as Antwerp, Brussels and Bruges to escape persecution and the war with Spain in the late 1500s and early 1600s. They introduced sophisticated new painting styles and together with Dutch artists created a climate of artistic excellence in the Dutch Republic.

Artists emphasized the horizon line and changing weather conditions of the Dutch countryside, often populating scenes with engaging details of daily life. From the 1560s to the 1620s, Northern Europe endured an extremely cold period known as the "Little Ice Age." Inspired by the winter landscapes of Flemish artists who had fled to Amsterdam,Hendrick Avercamp elevated the subject to a new genre in works such as his Winter Landscape Near a Village.

Dutch cities swelled with the influx of immigrants from the south taking refuge in religiously tolerant, albeit strongly Protestant, urban environments. Protestant churches in the Netherlands were largely devoid of religious imagery. Instead, artists painted images of biblical figures and contemporary religious structures such as Jan van der Heyden's View of the Westerkerk, Amsterdam for display in people's homes as expressions of their piety and affluence.

Successful merchants, powerful politicians, influential scholars and other prominent individuals often commissioned portraits of themselves, their spouses, and sometimes their children. Rembrandt's portrait of Aeltje Uylenburgh, the unquestionable jewel of the Van Otterloo collection, is one of the finest portraits by Rembrandt in private hands. Although the artist painted it when he was only twenty-six, Rembrandt sensitively rendered the effects of age and tenderly captured his subject's soft cheeks, bright eyes, and crisp linen cap.
The Art of Daily Life

The daily lives of the rich and poor became a new subject for painting during the Dutch Golden Age. These sometimes humorous genre scenes also contain allegorical symbolism. The importance of frugality and modesty, and the fleeting nature of life, were especially popular themes in a society grappling with how to express its new-found prosperity while maintaining a pious and humble  lives. In this scene by Nicolaes Maes, a woman deftly picks the pockets of a sleeping man while coyly inviting the viewer's silence. A beautiful and perhaps cautionary still life of glasses, jars, pipes and tobacco alludes to the sources for the man's drowsy vulnerability. Maes studied with Rembrandt and is regarded as one of his most important pupils.

Allegories of Myth and Morality

Intrigued by new translations of ancient Greek myths, many Dutch artists incorporated classical imagery in their work. In this monumental canvas by Aelbert Cuyp, Orpheus plays the violin for an enchanted menagerie of animals from Europe and around the globe. Cuyp's ambitious paintings not only highlight his skills as a landscape and animal painter, but also the era's lively exchange of artistic, literary and scientific ideas. Cuyp, who never left Europe and would not have seen many of these animals firsthand, drew upon prints and

stuffed specimens in aristocratic "cabinets of curiosities" to depict them. Allegorical imagery was not limited to paintings in 17th-century Dutch households. The owner of this stunning four-door cupboard could display it and avoid the criticism of ostentation because the cupboard served as a daily reminder of his religious obligations-a veritable "sermon in wood."

The Dutch Republic dramatically expanded its influence and financial prospects through voyages around the globe, becoming the dominant international maritime power in the 17th-century. Accordingly, Dutch artists were the first to paint the sea in its own right - a reflection of the importance of water in the nation's psyche. Maritime views are often characterized by precise depictions of ships and atmospheric rendering of the weather. The fertile landscape was similarly a favorite new subject. Cloud-filled skies billowing over a narrow stretch of earth or sea emphasize the flat horizons for which the Netherlands is known.

The carefully balanced compositions in Dutch still lifes are often visual odes to prosperity and pleasure with elements of moralistic symbolism. As the nation emerged as a powerful mercantile force, Dutch artists filled their canvases with the staples and luxuries of the trades they dominated - Dutch cheese, French wine, Baltic grain, South American tobacco, and Asian porcelain and pepper.

When painting seemingly informal assemblages, Dutch artists played with balance and depth to enhance the drama and intimacy of the scene. In Jan Davidsz. de Heem's Glass Vase with Flowers on a Stone Ledge, the artist used light in innovative ways, spotlighting the intensely colored flowers against a deep black background. The vase contains flowers that bloomed at different times of the year, somehow enhancing their beauty by combining faithful representation with impossibility. 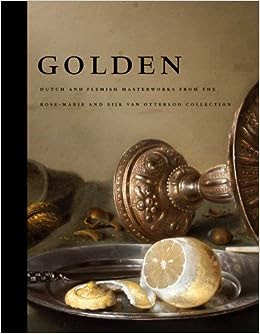 Golden: Dutch and Flemish Masterworks from the Rose-Marie and Eijk van Otterloo Collection. Peabody Essex Museum in conjunction with the Mauritshuis, The Hague, and in association with Yale University Press. 2011; 404 pages.

More works in the exhibition: 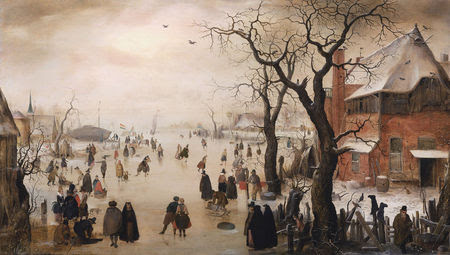 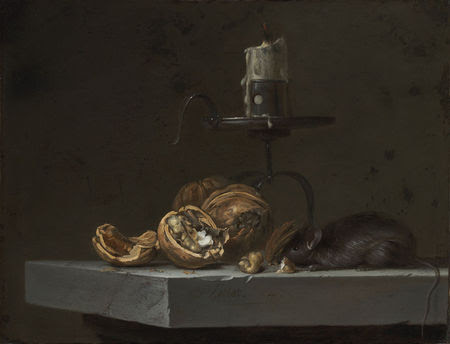 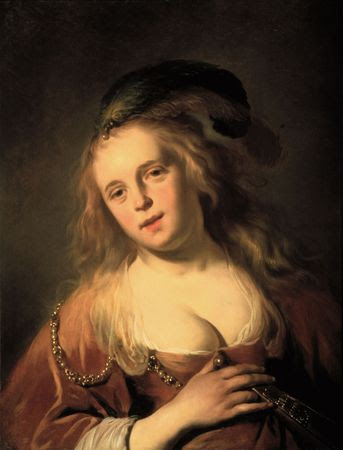 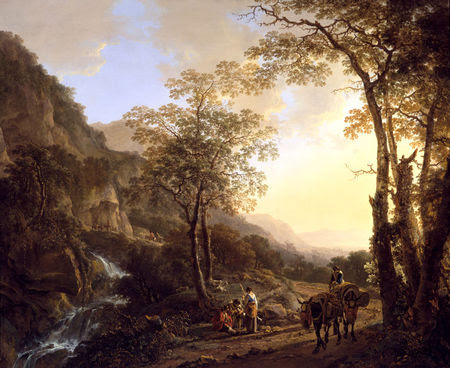 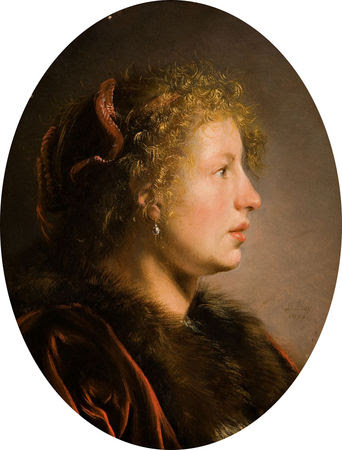 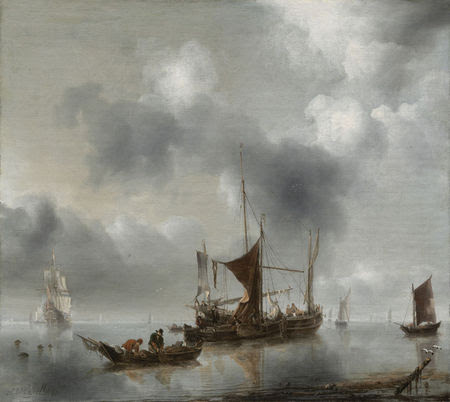 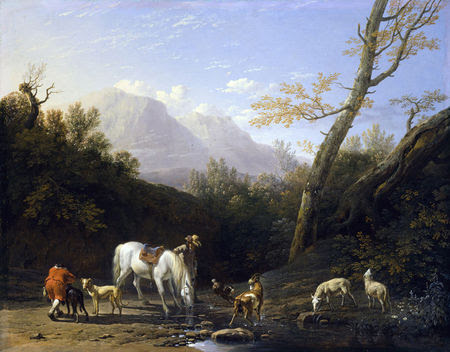 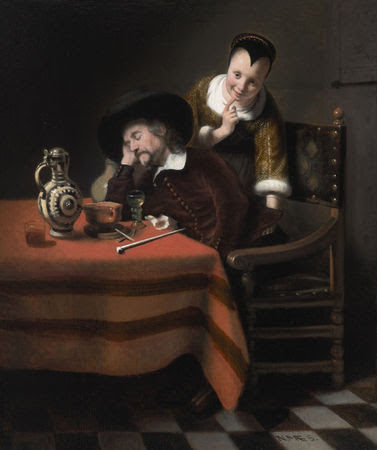 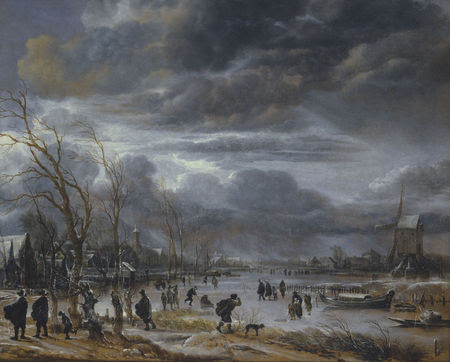 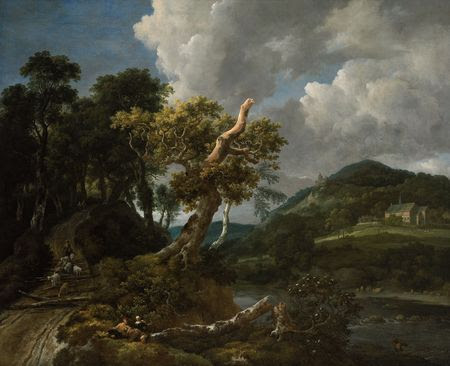 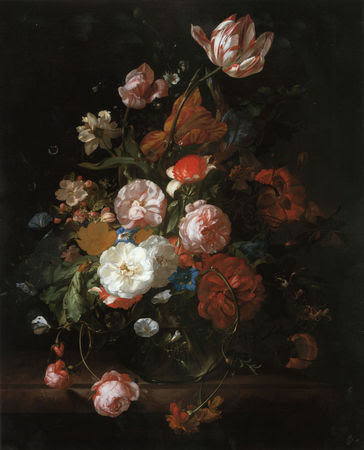 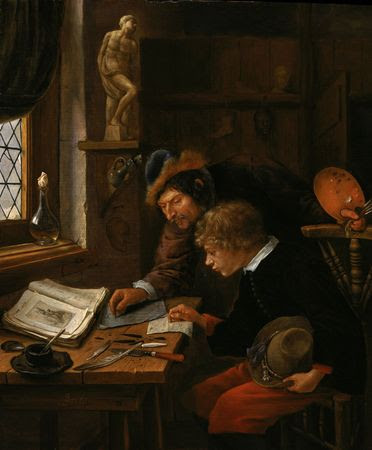 
Posted by Jonathan Kantrowitz at 10:54 AM