The Baltimore Museum of Art (BMA)  explores an unprecedented period  of cultural and intellectual exchange between Mexico and the U.S. in Crossing Borders: Mexican Modernist Prints, on view November  19, 2017 through March 11, 2018.

The exhibition features  30 prints and drawings created in the 1930s and 1940s by artists such as Diego Rivera, José Clemente Orozco, David Alfaro Siqueiros, and Elizabeth Catlett.

Among the works in Crossing Borders that address social issues is

Zapata (1932),  Rivera’s lithograph of Mexican Revolution hero and agrarian leader Emiliano Zapata.  One of  the earliest Mexican modernist prints to enter the  BMA’s collection, it shows Zapata and his horse standing over the dead body of a wealthy landowner as farmers  crowd in behind them. Other examples include Orozco’s The Lynching (1934), a wrenching condemnation of racial violence from the portfolio The American Scene, No.1 that depicts mutilated bodies hanging from trees and burning in flames.

Imperialist Industrialization (1945), a linoleum cut by Leopoldo Méndez points to the complexities of  Mexico’s shift from an overwhelmingly agricultural economy to an industrial one at the expense of the poor.

Méndez  was one of the founders of the influential Taller de Gráfica Popular (People’s Graphic Art Workshop). Declaring its  commitment to “the progressive and democratic interests of the Mexican people,” this printmaking collective and  artist community opened its doors to all regardless of their race  or social standing, including visitors from abroad.

My right is a future of equality with other Americans  (1946 - 47), the final print from the artist’s series, The Negro Woman. This epic narrative tells of the  struggles, oppressions, and achievements of African American women.

Reclining Nude (1931) by Siqueiros is a recently acquired transfer lithograph of his companion Uruguayan poet  Blanca Luz Brum that was created while the artist was living in exile in the remote mining town  of Taxco. Its intermingling, three - dimensional forms seem to oscillate between stone sculpture and human flesh. 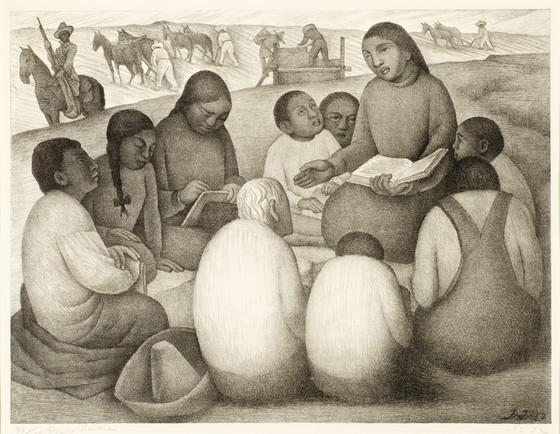 Posted by Jonathan Kantrowitz at 8:46 AM