Van Gogh and the Sunflowers 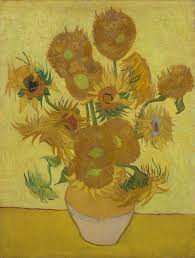 Sunflowers (1889), one of Vincent van Gogh’s best-known paintings, will be the centrepiece of the summer exhibition Van Gogh and the Sunflowers. The presentation will highlight the flower’s significance to the painter and what he hoped to achieve with his Sunflowers. Van Gogh himself thought that this work was among the best things he had done.

A great deal of study has been devoted to the masterpiece from the Van Gogh Museum’s collection in recent years. The exhibition will show what the latest technical research has contributed to our knowledge of Van Gogh’s working methods, the discolouration of certain pigments and the painting’s conservation history and current condition. The public will also have a first opportunity to see the back of the masterpiece, including the wooden strip that Van Gogh himself added to create more space for the sunflowers.

Van Gogh and the Sunflowers presents the fascinating genesis of the painting and the sunflower’s significance to Van Gogh. The flower still lifes he painted during his time in Paris reflected the French floral still life tradition. It was in that city that he first chose the sunflower as a subject, in both landscapes and still lifes. Having moved to the southern French town of Arles, he then painted his celebrated large vases with sunflowers, which came to be associated with his friendship with Paul Gauguin. The painting now in the Van Gogh Museum’s collection was originally intended for Gauguin, who lived with Van Gogh in the Yellow House in Arles for two months and made a portrait of him as a painter of sunflowers.

Van Gogh considered the Sunflowers paintings to be among his best works. He realized that he had achieved something extraordinary: ‘to be sufficiently heated up to melt those golds and those flower tones, not just anybody can do that, it takes an individual’s whole and entire energy and attention.’ It was not only Gauguin who was impressed by the works, Vincent’s brother Theo and other artists and critics also found the Sunflowers series magnificent. It did not take long after Van Gogh’s early death for them to assume the status of masterpieces.

Sunflowers, study (F377), Oil on canvas, 21 x 27 cm, Van Gogh Museum, Amsterdam
Van Gogh and the Sunflowers will include twenty-three works, virtually all from the Van Gogh Museum’s own collection: in addition to Van Gogh’s Sunflowers, there are masterpieces like 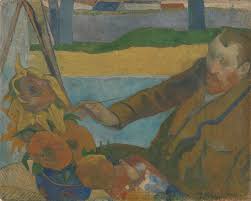 and Paul Gauguin’s Vincent van Gogh Painting Sunflowers (1888), as well as a number of drawings by Van Gogh that are rarely shown because of their fragility and sensitivity to light.

Besides, there is a loan by Isaac Israëls on view, Woman in Profile before Van Gogh’s ‘Sunflowers’ (1916-1920) from Museum de Fundatie, Zwolle.


Exceptionally, the back of the world-famous Sunflowers is being shown for the first time so that visitors can see the wooden strip with the original nails that Van Gogh himself added at the top of the canvas. He probably realized while painting that the uppermost sunflowers were too close to the edge of the picture plane, so he attached the narrow wooden strip at the top to give the bouquet more space.


Study of working methods and condition
Van Gogh and the Sunflowers presents for the first time the results of the extensive technical research performed on this masterpiece. An international team of specialists headed by former senior conservator Ella Hendriks examined Sunflowers using the latest scientific techniques, in order to gather as much information as possible about the canvas, the ground and paint layers and the previous restorations carried out on the work. The aim was to discover which materials Van Gogh used, what condition the painting is in, whether restoration was needed and possible and what can be done to preserve the work – 130 years after it was painted – as effectively as possible for the future.


One important conclusion is that the ground and paint layers are stable, but extremely sensitive to vibrations caused by movement and to changes in humidity and temperature. It is therefore important that the painting is moved about as little as possible and that it should hang in a stable climate. For this reason, the museum recently decided not to allow Sunflowers to travel in future.


The research also provided detailed knowledge of the colours and blends of colours that Van Gogh used and the natural ageing process of the paint. The original colour nuances have been partially lost due to the effects of discolouration. We now know that the changes in colour in Sunflowers have been caused by the fading of a particular type of red paint (geranium lake) and the darkening of a particular type of yellow paint (chrome yellow). We also know more about the various restorations carried out on the work, and the consequences of these restorations.


Conservation treatment: varnish and retouches
Sunflowers underwent minor conservation treatment at the beginning of the year based on the findings of the research. The latter revealed that the painting has several layers of varnish, all of which were applied later and hence not by Van Gogh himself. They are dirty and yellowed but cannot be removed as the paint and varnish layers have merged in certain places. A layer of wax was later added on top of the varnish at some places to secure the paint and make the surface more matt. The wax, which was applied in the late 1990s and had taken on a matt, whitish effect over time, was removed during the recent conservation treatment. The retouches added during an earlier restoration were also examined. These could not be removed as they were located beneath the varnish layer and so new retouches were made on top of the old ones.

Van Gogh’s Sunflowers Illuminated: Art Meets Science is  a scholarly publication in which an international team of art historians, curators and conservation scientists will unveil the results of several years of research using the latest techniques into the sunflowers paintings in the Van Gogh Museum and the National Gallery in London. The book is published by Amsterdam University Press, price € 55.00.

The exhibition catalogue presents the research results to a wider public, and also situates the Van Gogh Museum’s Sunflowers in the context of the artist’s oeuvre and his series of sunflower still lifes. Van Gogh and the Sunflowers: A Masterpiece Examined has been written by Nienke Bakker and Ella Hendriks and appears in Dutch and English versions, price approx. € 17.50.
Posted by Jonathan Kantrowitz at 11:56 AM