The National Portrait Gallery in London announces its spring 2013 exhibition of iconic American Indian portraits by the American artist George Catlin (1796-1872). George Catlin: American Indian Portraits will open on 7 March 2013 and will include major loans from the Smithsonian American Art Museum, Washington.

Catlin was an artist, writer and showman who documented Native American peoples and their cultures to serve as a record of what he believed to be a passing way of life. What he created is regarded as one of the most important records of indigenous peoples ever made. Catlin was not the only artist to embark on such a project in the nineteenth century, but his record is the most extensive still in existence. 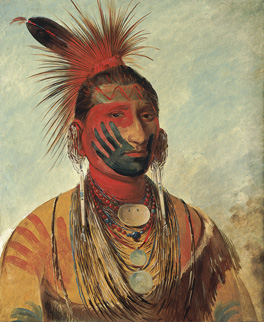 Catlin, who had little formal training, began his artistic career as a painter of portrait miniatures. In the 1830s he made five trips in the western part of the United States before the Native American peoples of those regions had been subsumed into the legal boundaries of the United States.

He assembled the materials and work he produced, during and inspired by the five trips, into his ‘Indian Gallery’ which comprised some 500 portraits, pictures and indigenous artefacts. Catlin’s entrepreneurial spirit led him to tour the ‘Indian Gallery’ in the eastern states from 1837-39, but he failed in selling it to the United States government. He then went on to tour the gallery in Europe for the next ten years including exhibitions held in Great Britain, France and Belgium. The works will be displayed to evoke the sense of spectacle Catlin created during the time of his tour and by doing so will demonstrate how Catlin constructed a particular image of Native Americans in the minds of his audience.


George Catlin: American Indian Portraits is organised by the National Portrait Gallery, London, in collaboration with the Smithsonian American Art Museum, Washington. The exhibition is curated by Dr Stephanie Pratt, Associate Professor of Art History at the University of Plymouth who has published extensively on the representation of Native American peoples, and Dr Joan Carpenter Troccoli, Founding Director of the Petrie Institute of Western American Art at the Denver Art Museum, from which she retired in 2012. She is co-author of George Catlin and His Indian Gallery (2002).

Sandy Nairne, Director of the National Portrait Gallery, London, says: ‘George Catlin made powerful and sympathetic portraits of the American Indians at a time of traumatic historical change. They are wonderful images, and I am delighted that the Smithsonian American Art Museum is collaborating with the National Portrait Gallery to allow them to be seen in Britain again.’

Dr Stephanie Pratt, Associate Professor of Art History, University of Plymouth, says: ‘As a person of Native American descent, I am very conscious of the extent to which Catlin's record of Plains Indian peoples dominates their representation even today. Visitors to the exhibition will have the opportunity to consider Catlin's Indian Gallery and ask whether these striking images adequately address the historical reality of American Indian peoples at that time.’

Dr Joan Carpenter Troccoli, Founding Director of the Petrie Institute of Western American Art at the Denver Art Museum says: ‘George Catlin: American Indian Portraits is a rare opportunity to examine a complex cultural figure from multiple perspectives. Ultimately Catlin's reputation rests on his art, and it's a thrill to see so many of his greatest works together on public view. In the presence of these portraits, it's impossible not to think of Catlin's pledge to his Native American subjects - that “phoenix-like”, they would rise from the stain on a painter's palette, and live again upon canvas, and stand forth for centuries yet to come, the living monuments of a noble race.’

Elizabeth Glassman, President and CEO, Terra Foundation for American Art, says: ‘We are proud to support the return of George Catlin’s superb collection of paintings and artefacts to the United Kingdom for the first time since 1840, when his ‘Indian Gallery’ debuted at London’s Egyptian Hall. Catlin’s representations of Native American life excited European audiences then, and this exhibition, developed collaboratively by American and British curators, will surely inspire a robust cross-cultural dialogue that’s as important today as it was more than 150 years ago.’
Posted by Jonathan Kantrowitz at 11:22 AM