After opening at the Städel Museum in Frankfurt am Main, the exhibition The Angel of the Odd – Dark Romanticism from Goya to Max Ernst will travel to the Musée d’Orsay. It brings together around 200 works: paintings, drawings, prints and sculptures from the late 18th century to the early 20th century, as well as twelve films from the inter-war period.

It was literary critic and art historian Mario Praz who first used the term “Dark Romanticism”, thus naming a vast swathe of literature and artistic creation, which from the 1760s onwards exploited the shadows, excesses and irrational elements that lurked behind the apparent triumph of enlightened Reason. Dark Gothic novels first appeared in England at the end of the 18th century and were instantly a great success. Although set in the contemporary world, they were mainly concerned with mystery and heightened emotions that could make the reader shiver with fear as well as pleasure, and explored not only the terror we all have of the unknown, but also our fascination with the sadistic and the grotesque.

Painters, engravers and sculptors from all over Europe, London and Paris, Madrid and Dresden, striving to compete with poets, playwrights and novelists, expressed this dark side visually in a multitude of ways, plunging the viewer into a dizzying spectacle of the horrific and the grotesque: Goya and Géricault presented us with the senseless atrocities of war and the superstitions of their time, Fuseli and Delacroix produced their passionate interpretations of the works of Dante, Milton, Shakespeare and Goethe by giving substance to the ghosts, witches and devils in them, whereas C.D. Friedrich and Carl Blechen cast the viewer into enigmatic, gloomy landscapes.

It was from these incredibly diverse and fertile European sources that the more sombre offshoots of Symbolism first appeared in the 1880s. Seeing the vanity and ambiguity that lay behind the belief in progress, many artists turned to the occult, reviving myths and exploiting the new ideas about dreams. 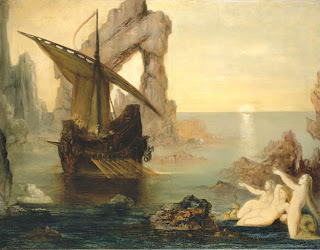 After the horror stories of Edgar Allen Poe, Charles Baudelaire, Théophile Gautier and Villiers de L’Isle- Adam, they deliberately asked difficult questions in order to bring Man face to face with his age-old fears and contradictions: the savagery and depravity hidden in every human being, the risk of mass degeneration, the harrowing strangeness behind the deceptive reassurance of daily life.

While artists like Khnopff, Spilliaert and Klinger used silence to blur the boundary between dream and reality, the work of Ensor, Stuck and Rops, right in the middle of the second industrial revolution, presented fantastical, clamorous hordes of witches, sniggering skeletons, shapeless devils, lecherous Satans, Medusas and Sphinxes, which, far from signifying a deliberately obscure withdrawal into the past, expressed a clear, defiant, carnivalesque disillusionment with the present and affirmed the desire for creative freedom in the face of the rigid constraints of bourgeois society.

Dark Romanticism regained its momentum when Europe finally emerged from the nightmare of the First World War. Long familiar with the malevolent fairies and creatures of Goya, German Romanticism and Symbolism, the Surrealists took the driving forces of the unconscious, of dreams and of intoxication as the basis for artistic creation, completing the triumph of the imagination over the principle of reality, and thus, putting the finishing touches to the spirit itself of Dark Romanticism. At the same time, the cinema seized on Frankenstein, Faust and other masterpieces of this genre whose unforgettable scenes have firmly established them in the collective imagination.

By calling forth the visionary creations of Goya, Fuseli, Blake, Delacroix, Hugo, Friedrich, Böcklin, Moreau, Stuck, Ensor, Mucha, Redon, Dali, Ernst, Bellmer, Klee and numerous other artists and film makers, the exhibition also enables us to reassess and gain new insight into the literary and artistic sources of the world of dark fantasy which continues to have a significant influence on the films, video games and musical works of today

Posted by Jonathan Kantrowitz at 7:49 AM