This fall The Phillips Collection takes a fresh look at the artistic process of Vincent van Gogh (1853–1890). While recognized for the intensity and speed with which he painted, van Gogh also could work with careful deliberation, creating numerous versions of some of his most famous subjects. The first exhibition in Phillips Collection history devoted to the artist, Van Gogh Repetitions goes beneath the surface of some of his best-known paintings to examine how and why he repeated certain compositions during his 10-year career. More than 30 paintings and works on paper are on view at The Phillips Collection from Oct. 12, 2013, through Jan. 26, 2014.

The exhibition is the first to focus on van Gogh’s “repetitions”—a term the artist used to describe his practice of creating more than one version of a particular subject. He often began by sketching a person or landscape rapidly from life. Back in the studio, he would repeat the subject, reworking and refining his idea on a fresh canvas, in some cases many times. In contrast to the popular perception of van Gogh wielding his brush with wild abandon before nature, Repetitions shows how the artist was also methodical and controlled.

“This is a rare opportunity to get to know one of the world’s most recognizable artists in a fresh, new way,” said Dorothy Kosinski, director of The Phillips Collection. “He is such a beloved figure who has earned great renown, but there is still much more to be learned. Through a close examination of this fascinating but only partially understood aspect of his work, we can create a richer, more meaningful picture of his personal life and artistic production.” 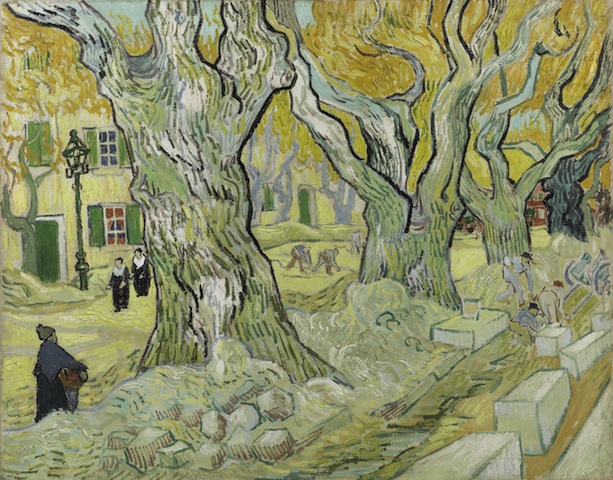 Van Gogh Repetitions is inspired by The Road Menders (1889) in The Phillips Collection and a painting of the same subject, The Large Plane Trees (1889), in The Cleveland Museum of Art. The exhibition reunites the two masterpieces—never before seen together in Washington—and invites deep, focused study of the similarities and differences between them, revealing some surprising facts about van Gogh’s process and motivation.

Examples from 13 of van Gogh’s repetitions will be on view, in some cases reunited for the first time in many years. The exhibition reveals the vitality and persistence of this method across van Gogh’s career in significant locales in the Netherlands and in France, including Paris, Arles, Saint-Rémy, and Auvers. It brings together portraits and landscapes from some of the world’s most renowned collections, including The Metropolitan Museum of Art and The Museum of Modern Art, New York; Museum of Fine Arts, Boston; Philadelphia Museum of Art; The Art Institute of Chicago; Kröller-Müller Museum, Otterlo; and the Van Gogh Museum, Amsterdam. The exhibition offers an exceptional opportunity to see masterpieces from the Musée d’Orsay, Paris, including

VAN GOGH AND THE PHILLIPS COLLECTION

Museum Founder Duncan Phillips first expressed his desire to acquire “examples of the inventive genius of van Gogh” in 1926. In 1930, —one of the first paintings by van Gogh in an American museum—entered the collection. and a pencil and ink drawing of Moulin de la Galette (1887).

A beautiful and groundbreaking catalogue, published by Yale University Press in association with The Phillips Collection and The Cleveland Museum of Art, accompanies the exhibition. It features 125 color illustrations, including numerous examples of Vincent van Gogh’s repetitions along with related works and technical studies. Essays by Phillips Chief Curator Eliza Rathbone and Cleveland Curator of Modern European Art William Robinson consider the many unresolved issues and controversies surrounding van Gogh’s repetitions, exploring their origins, development, and meaning in van Gogh’s art. Analyses of specific paintings by Rathbone, Robinson, Phillips Head of Conservation Elizabeth Steele, and Cleveland Paintings Conservator Marcia Steele make use of technical and analytical examinations to understand how the artist worked. 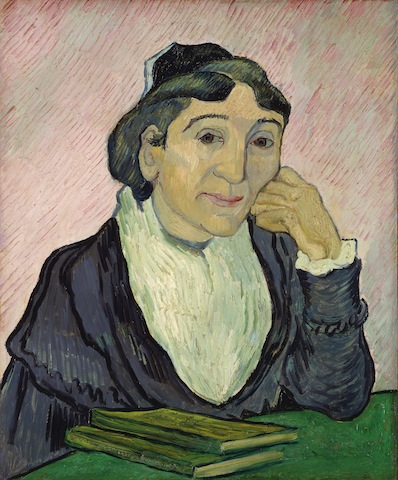 Posted by Jonathan Kantrowitz at 2:51 PM