Van Dyck: The Anatomy of Portraiture at The Frick Collection, March 2 through June 5, 2016


One of the most important loans in the exhibition was painted during this period: Van Dyck’s 1623 portrait of Cardinal Guido Bentivoglio, from the Galleria Palatina at the Palazzo Pitti in Florence.. In the Baroque period, Van Dyck's depiction of Bentivogliowas much emulated and became the benchmark for any portrait of a prince of the Church. Its exclusive trip to the Frick marks only the second time in the painting's history that it has left Italy.

In 1632, Van Dyck was appointed principal painter to Charles I of England. The portraits he produced over the following decade, before his premature death in 1641, are among his most celebrated and feature heavily in the exhibition. 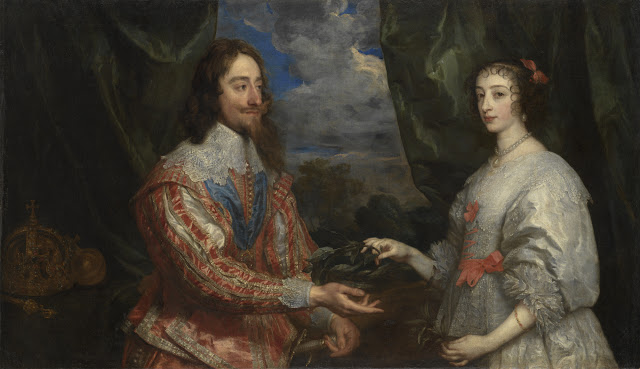 Included in the exhibition is a horizontal portrait of Charles I and his queen Henrietta Maria, now in the collection of Archiepiscopal Castle and Gardens, Kroměříž, The Czech Republic. This remarkable canvas has never before traveled to the United States. 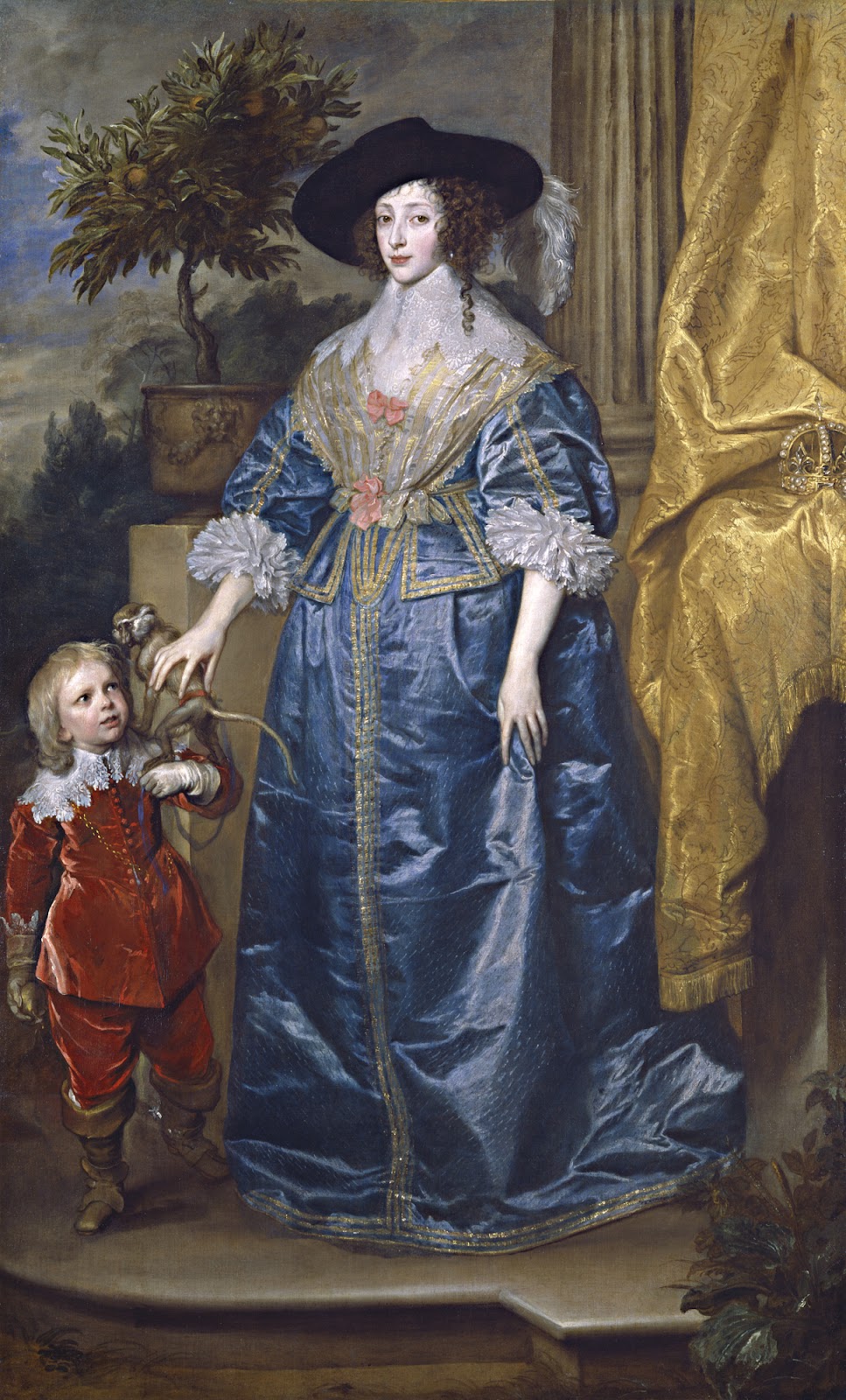 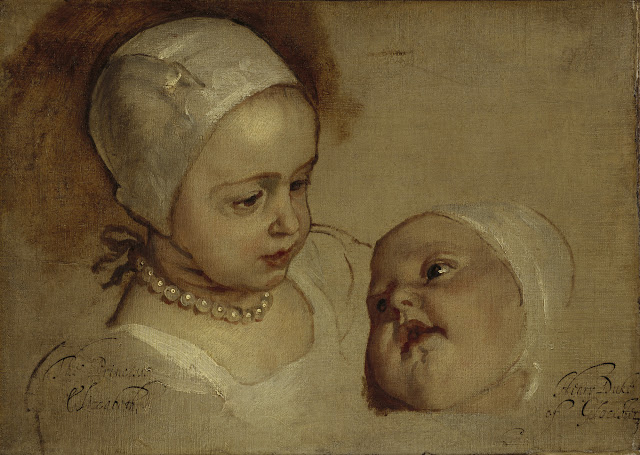 Anthony van Dyck (1599–1641) The Princesses Elizabeth and Anne, Daughters of Charles I, 1637 Oil on canvas Scottish National Portrait Gallery, Edinburgh; purchased with the aid of the Heritage Lottery Fund, the Scottish Office and the Art Fund 1996


A more intimate work of Princesses Elizabeth and Anne comes to New York from the Scottish National Portrait Gallery.

In addition to showcasing notable works from European collections, Van Dyck: The Anatomy of Portraiture will also shine a spotlight on important paintings by Van Dyck from American private and public collections, many of which have not been included in previous exhibitions on the artist. These paintings are a legacy of the longtime fascination that Van Dyck has exerted on American collectors, including Henry Clay Frick, who acquired no fewer than eight paintings by the artist. 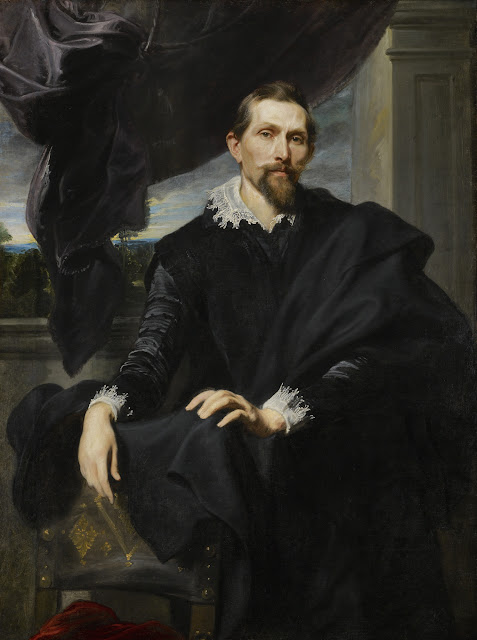 
Among these is the portrait of Frans Snyders, a fellow painter and close artistic collaborator, purchased in the summer of 1909 by Frick, who also acquired that same year 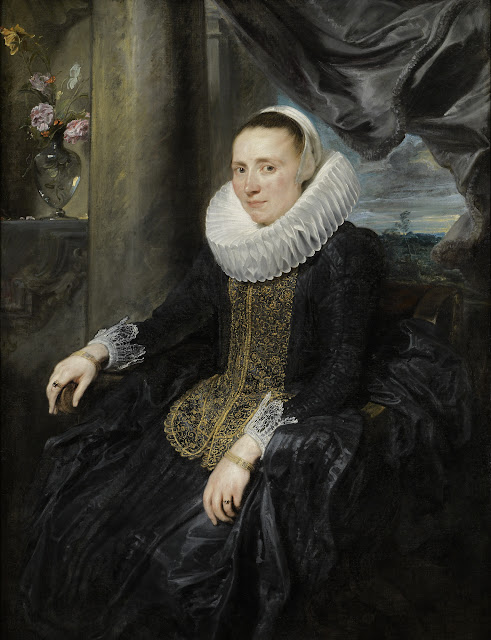 Painted about 1620 when the artist was roughly twenty years old, the two portraits reveal the prodigy’s startling talent, expressed in likenesses that combine supreme elegance with a subtle element of melancholy.

Other Frick-owned works included in the exhibition will be 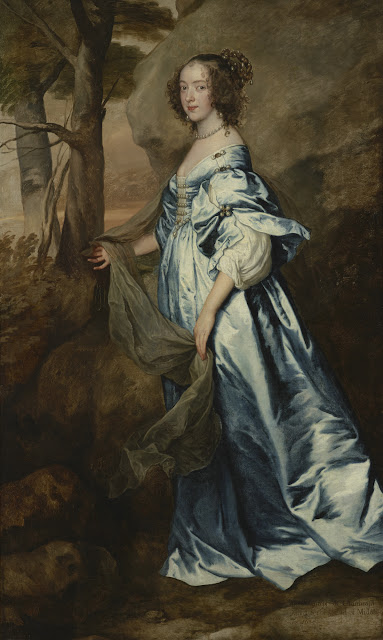 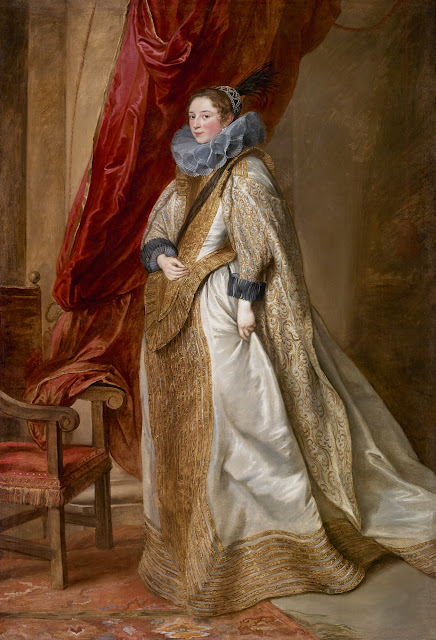 and the recently conserved Portrait of a Genoese Noblewoman.

APPROACH TO PREPARATION OF PORTRAITS A MAJOR THEME

Van Dyck’s singularity is most apparent in his approach to preparing a portrait, and initial sketches and unfinished paintings compose one of the major themes of the show. Portrait drawings by his contemporaries, including Peter Lely and Jacob Jordaens, will highlight the distinct way he created his celebrated portraits. Whereas many artists made detailed studies of a sitter’s face before beginning work on a painting, Van Dyck preferred rough sketches that mapped a sitter’s pose but left many details unresolved. He would then usually paint the sitter directly from life, studying his or her face without an intermediary drawing.

This approach is apparent especially in unfinished works, such as the Portrait of a Woman from the Speed Museum in Louisville, above. Here, the haunting depiction of the unknown woman’s face contrasts with passages intended to be completed by studio assistants. The Frick’s exhibition will reunite preparatory works and finished paintings, in some cases for the first time since they left Van Dyck’s studio several hundred years ago. 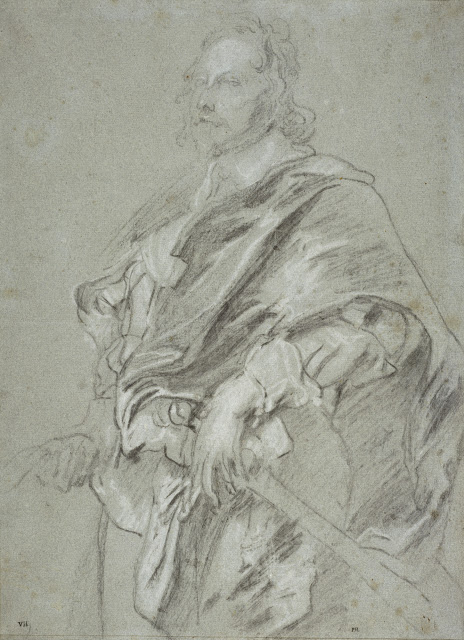 A preparatory drawing of the English court musician and painter Nicholas Lanier, above, from the Scottish National Gallery, for example, will be displayed alongside the related portrait, on loan from Vienna’s Kunsthistorisches Museum, above.

In the drawing, Van Dyck worked with black and white chalk on blue paper, swiftly laying out the fall of fabric of Lanier’s cloak, the play of his curls, his elegant hands, and his almost supercilious expression. Nonetheless, the artist made a number of changes in the final composition: instead of holding out a glove in his right hand, Lanier’s arm is akimbo, the hand tucked invisibly at his side. Less obviously, Van Dyck removed a lock of hair to leave Lanier’s temple exposed. These alterations indicate how Van Dyck continued to think through his composition as he transitioned from preparatory drawing to canvas. Remarking on the artist’s meticulous process, Lanier told the painter Peter Lely that he “sat seven entire days” for his portrait, but “was not permitted so much as once to see it till [Van Dyck] had perfectly finished the face to his own satisfaction.” Such anecdotes combinewith the physical evidence of Van Dyck’s works to allow for the exhibition’s reconstruction of the artist’s working method.

PAN-EUROPEAN DISTRIBUTION OF HIS WORK IN PRINT

Van Dyck made astute use of reproductive prints to ensure that his portraits had apan-European distribution. This is particularly apparent in his so-called Iconographie series of printed portraits, depicting a range of sitters who included fellow Flemish artists, learned scholars, statesmen, and aristocratic ladies. The Iconographie will receive its own special installation at the Frick, encompassing prints, drawings, oil sketches, and one of the earliest bound volumes of Van Dyck’s portrait prints, on loan from the Rijksmuseum. As well as the work of professional engravers, the Iconographie features some of Van Dyck’s autograph etchings, which are among the greatest prints ever made. 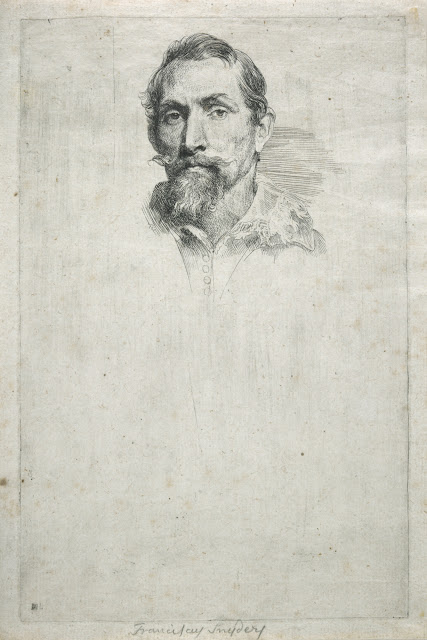 These include Van Dyck’s etching, above after his portrait of Frans Snyders (illustrated above).

In his paintings of Snyders and his wife, the young Van Dyck depicted the pair amidst various trappings of prosperity—elegant clothing, furniture, and a distant view of parkland. In his print, made more than a decade later, Van Dyck stripped Snyders’s portrait down to just head and shoulders. Translated from oil on canvas into a new medium, the etching reveals the variety of Van Dyck’s graphic vocabulary. Stippling maps the contours of Snyders’s brow, cheekbones, and forehead, yielding to loose crosshatching in areas of greater shadow. Calligraphic lines, meanwhile, convey Snyders’s nonchalantly arranged hair and upturned mustache. Such a minimal etching was intended to appeal to the most sophisticated collectors, but Van Dyck also collaborated with highly skilled professional engravers to create more traditional prints for wider distribution. To assist these engravers, Van Dyck prepared both drawings and exquisite grisailles, or gray-scale oil sketches. In the exhibition, four of these grisailles, will demonstrate Van Dyck’s unusual mastery of this refined medium.

BEYOND SOCIETY: FAMILY AND SELF-PORTRAITS

Van Dyck used portraiture to represent the very pinnacle of contemporary society, but it also provided him with a vehicle to explore intimate relationships and his own identity. The exhibition will include portraits of 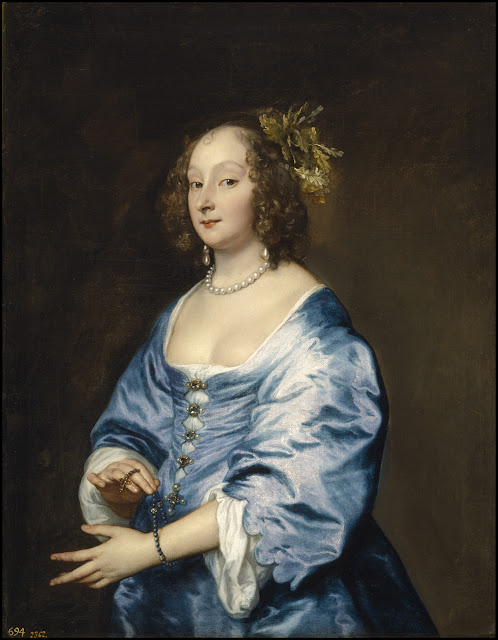 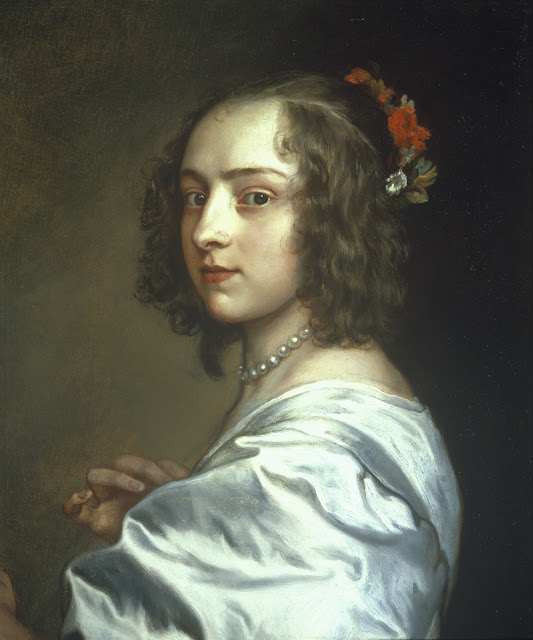 as well as the woman believed to have been his mistress, the courtesan Margaret Lemon. Lemon appears in three-quarter profile, delicately touching the fabric at her shoulder in a gesture of refinement that would fascinate subsequent generations of artists. The painting, long considered lost but now in a New York private collection, inspired a spate of imitations during the seventeenth century.

Van Dyck was an avid self-portraitist throughout his career, and four of his self-portraits will be included in the exhibition. 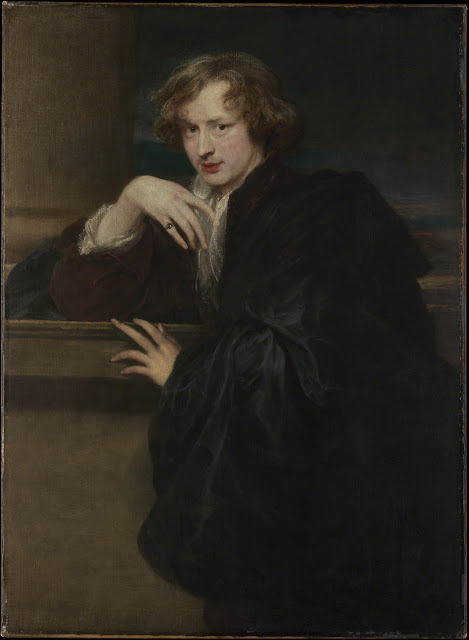 In the earliest of these, executed about 1613–15, an adolescent Van Dyck turns his head to study his own likeness. His piercing stare and the boldness of his brushwork presaged a career that would prove seminal for the history of European painting. Visitors to Van Dyck: The Anatomy of Portraiture will have an unprecedented chance to immerse themselves in that achievement. 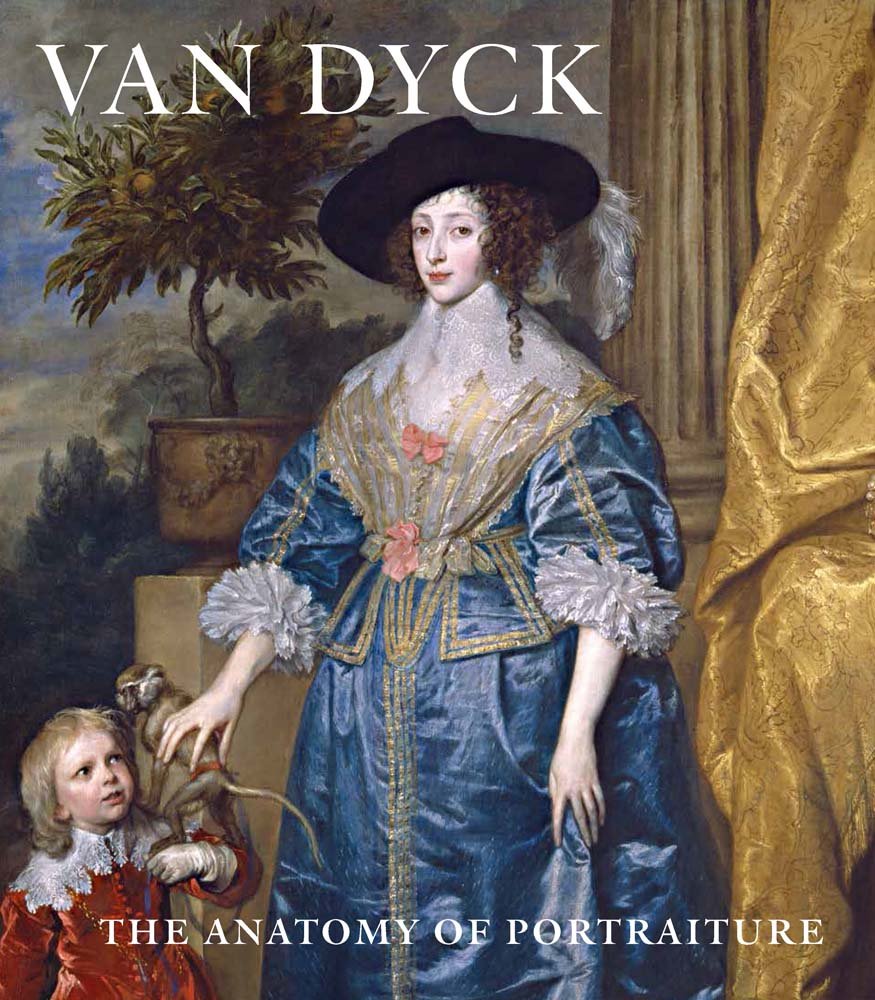 A landmark volume accompanies the exhibition, providing a comprehensive survey of the portrait drawings, paintings, and prints of Anthony van Dyck (1599–1641), one of the most celebrated portraitists of all time. Written by Stijn Alsteens and Adam Eaker with contributions by An Van Camp, Ashmolean Museum; Xavier F. Salomon, The Frick Collection; and Bert Watteeuw, Rubenianum, Antwerp; the book showcases the full range of Van Dyck’s fascinating international career and makes a compelling case for the distinctiveness and importance of his work. Published by Yale University Press in association with The Frick Collection, 9 ½ x 11 inches, 267 illustrations. 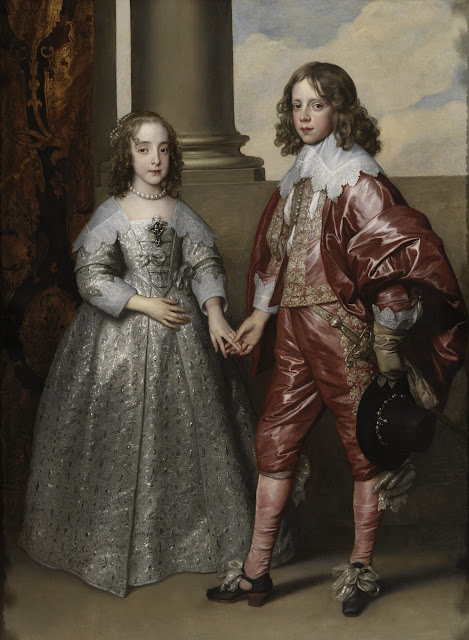 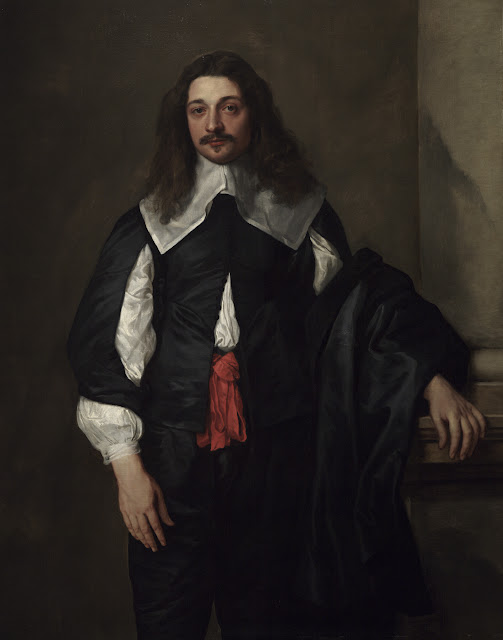 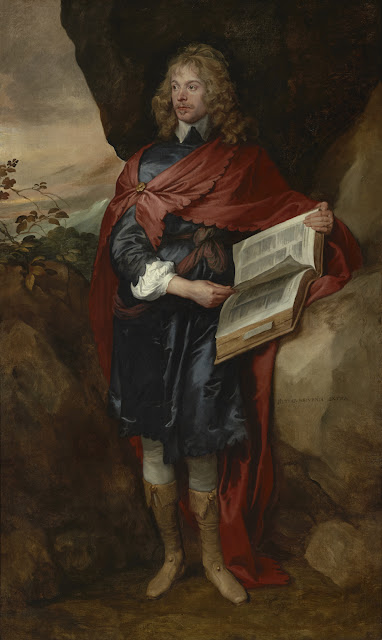 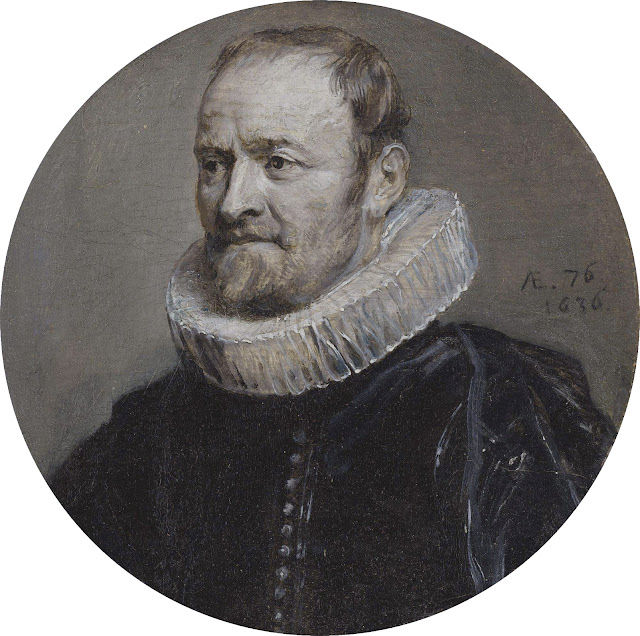 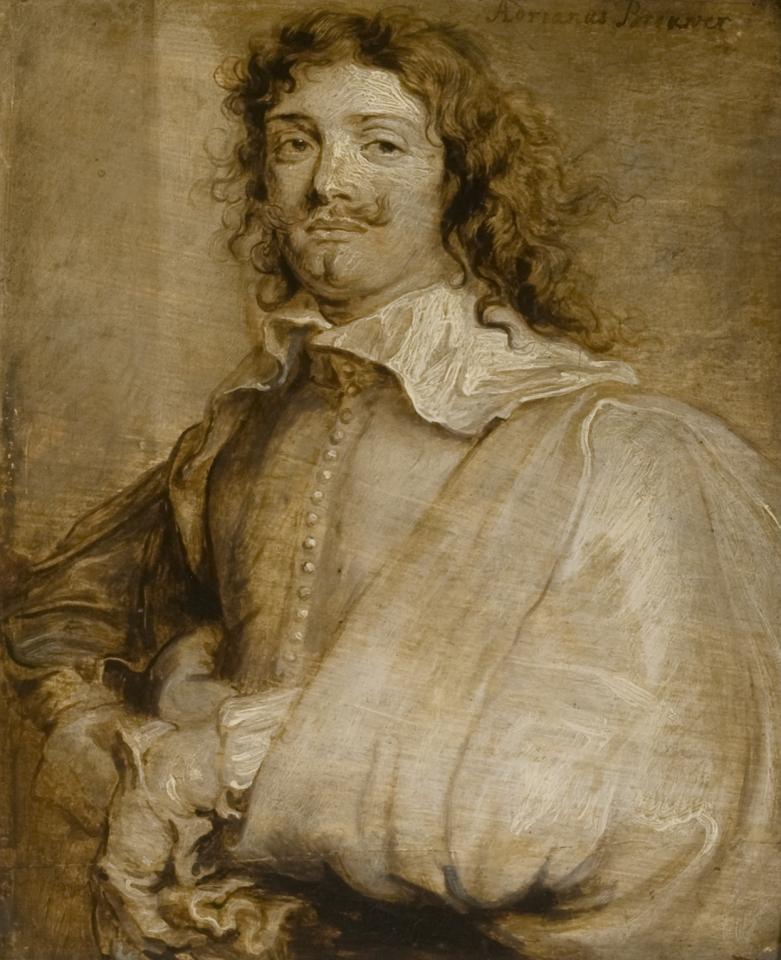 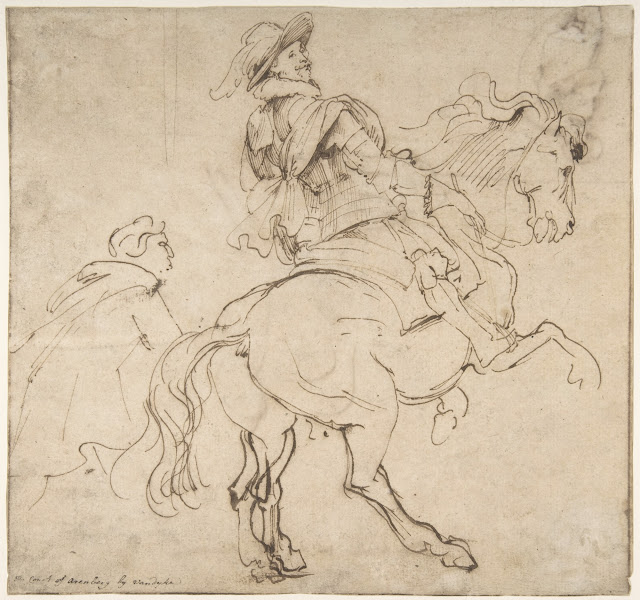 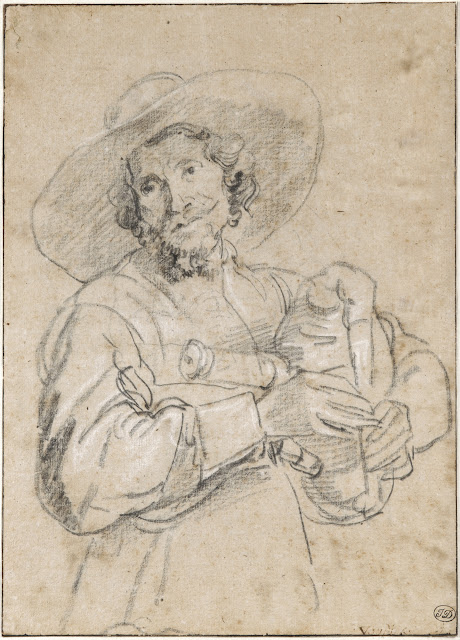 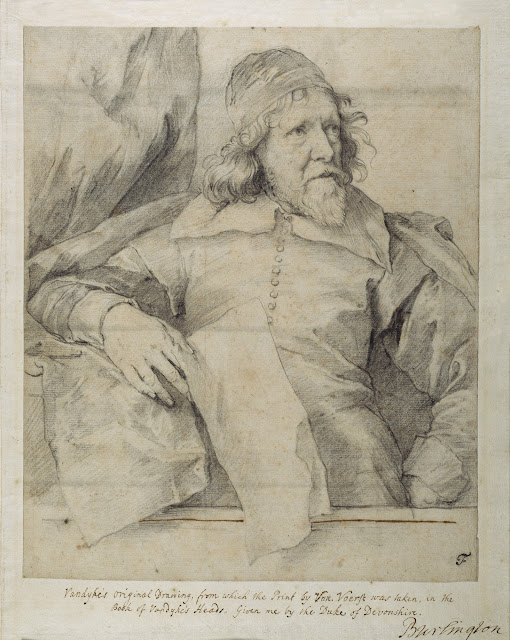 Anthony van Dyck (1599–1641) Inigo Jones, 1632–36 Black chalk, pen and brown ink, squared for transfer in black chalk; laid down The Duke of Devonshire and the Trustees of the Chatsworth Settlement, Chatsworth, Derbyshire 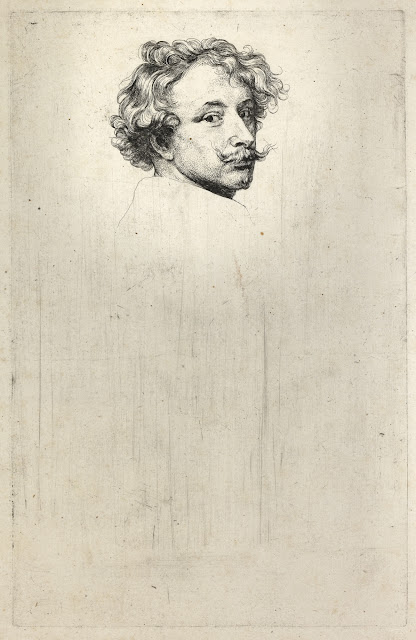 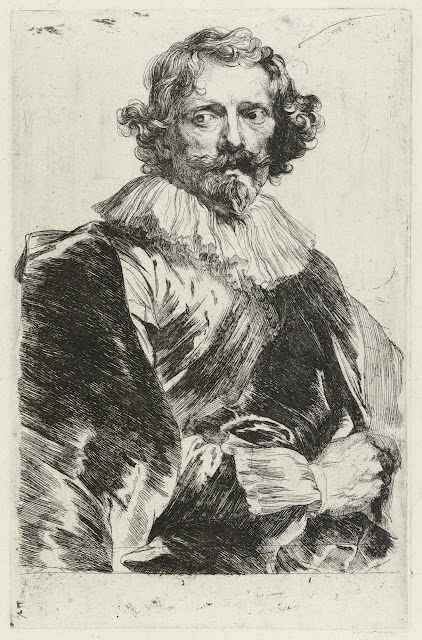 One of the most important loans in the exhibition was painted during this period: Van Dyck’s 1623 portrait of Cardinal Guido Bentivoglio, from the Galleria Palatina at the Palazzo Pitti in Florence.. In the Baroque period, Van Dyck's depiction of Bentivogliowas much emulated and became the benchmark for any portrait of a prince of the Church. Its exclusive trip to the Frick marks only the second time in the painting's history that it has left Italy.

In 1632, Van Dyck was appointed principal painter to Charles I of England. The portraits he produced over the following decade, before his premature death in 1641, are among his most celebrated and feature heavily in the exhibition.

Posted by Jonathan Kantrowitz at 1:14 PM