For the first time in twenty-four years and only the second timein their history, two masterpieces of early Netherlandish painting commissioned by the Carthusian monk Jan Vos will be reunited in a special exhibition at The Frick Collection. These works—the


Frick’s Virgin and Child with St. Barbara, St. Elizabeth, and Jan Vos, commissioned from Jan van Eyck and completed by his workshop, and

The Virgin and Child with St. Barbara and Jan Vos (known as the Exeter Virgin, after its first recorded owner), painted by Petrus Christus and now in the Gemäldegalerie, Berlin—will be shown with a selection of objects that place them in the rich monastic contextfor which they were created.

The exhibition pays tribute to Vos as a patron and offers insightinto the role such images played in shaping monastic life in fifteenth-century.

Bruges.The Charterhouse of Bruges: Jan van Eyck, Petrus Christus, and Jan Vos will be on view in the museum’s Cabinet Gallery and is organized by Emma Capron, the Frick’s 2016–18 Anne L. Poulet Curatorial Fellow.

The Carthusians belonged to one of the most austere monastic orders of the late Middle Ages, removed entirely from the secular worl dand committed to a life of solitude and silence spent mostly within the confines of their cells. These ascetic ideals belied a complex attitude toward ornament and images. While specific images were cited as distracting luxuries in the order’s regulations, others were valued as important tools for meditation, and the Carthusians’monasteries, known as charterhouses, became rich repositories of painted panels, illuminated manuscripts, funerary monuments, altarpieces, and other fine works of art.

In April 1441, the Carthusian monk Jan Vos was elected prior of the Charterhouse of Genadedal, an important monastery near Bruges that was patronized by the dukes of Burgundy and the city’s foremost patrician families. Soon after his arrival in Bruges, Vos commissioned TheVirgin and Child with St. Barbara, St. Elizabeth,and Jan Vos from Jan van Eyck, who laid out the painting’s composition. Following the artist’s death in June 1441, the panel was completed by an unknown member of his workshop. Several years later, Vos commissioned the closely related Virgin and Child with St. Barbara and Jan Vos from Petrus Christus.

It was not uncommon for preeminent Netherlandish masters to paint important works for Carthusian monasteries, most famously Rogier van der Weyden, who, around 1455–64, gifted his monumental Crucifixion (now in the collection of El Escorial, Real Monasterio de San Lorenzo, Madrid) to the charterhouse of Scheut near Brussels, and another panel (possibly depicting the Virgin, now lost) to the charterhouse of Herne, where his son was a monk. Genadedal boasted impressive works of artas well. In addition to the Van Eyck Virgin and the Petrus Christus panel, a small choir book from Genadedal is included in the exhibition.


One of the only surviving illustrated manuscripts from the charterhouse, its decoration is worn from generations of monks touching and kissing the holy figures depicted within it. Another outstanding work in the exhibition is associated with Genadedal: 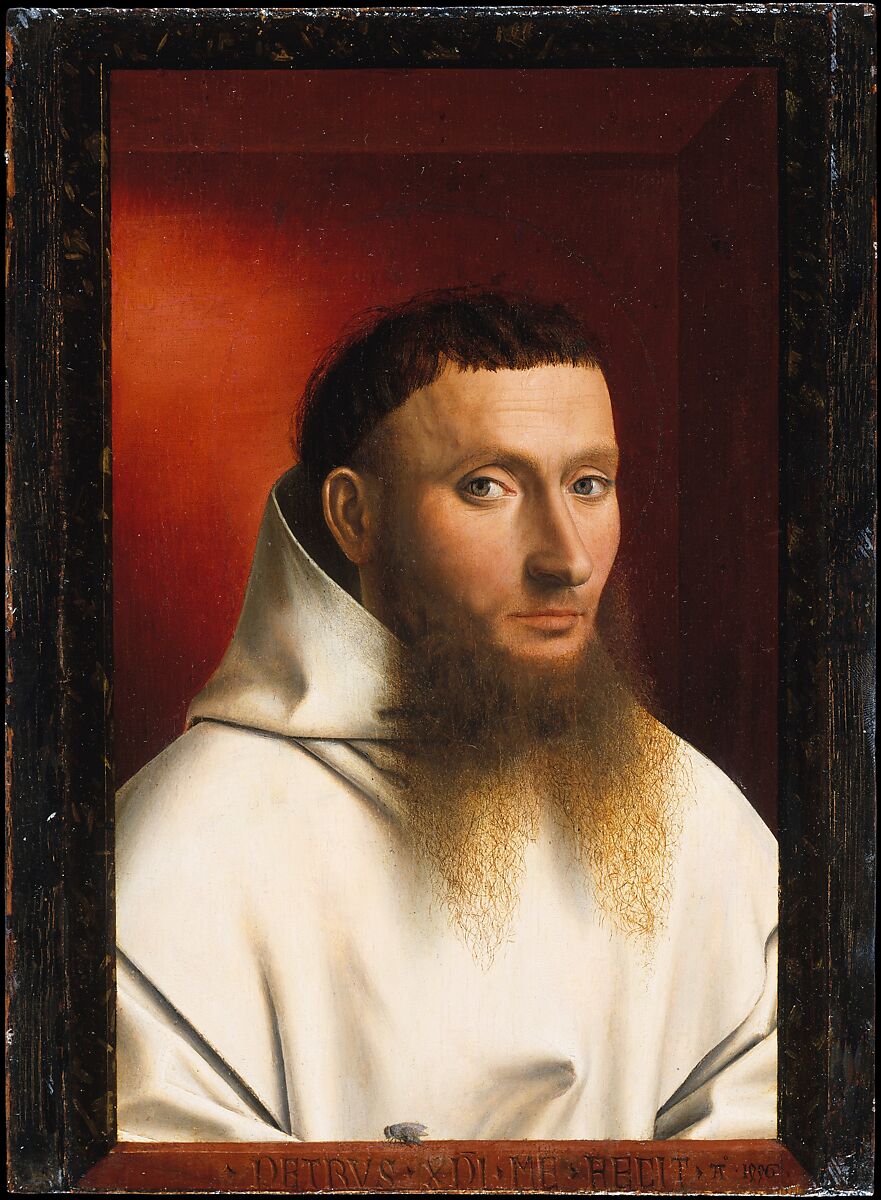 Petrus Christus’s Portrait of a Carthusian Lay Brother. Painted in 1446, it probably depicts one of the charterhouse’s membersand is thought to be the earliest surviving portrait of a cleric not depicted in the act of praying. Additional links of patronage tied the charterhouse to Van Eyck and Petrus Christus: for instance, the wealthy merchant Pieter II Adornes,who joined Genadedal in 1454 following the death of his wife, had previously been portrayed by Petrus Christus and had probably commissioned two panels of

The Stigmatization of St. Francis from Van Eyck (identified today as works in the 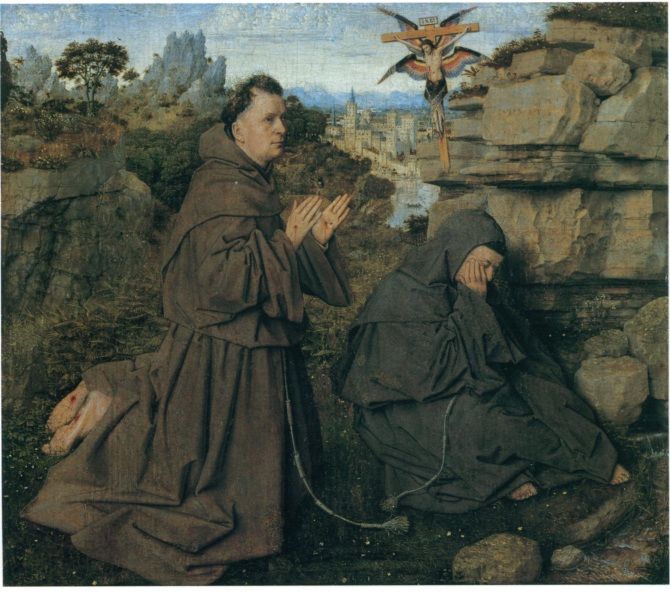 and the Philadelphia Museum of Art).

ABOUT THE PAINTINGS: DEVOTION & COMMEMORATION

Though different in scale, the Frick and Exeter Virgins bear remarkably similar imagery, composition, and fine execution. Both scenes depict Vos being introduced to the Virgin and Child by Saint Barbara, and are set within elaborate porticos opening on a panoramic cityscape; the panels achieve remarkable monumentality while conveying myriad minute details. Kneeling on holy ground removed from the city below, Vos exemplifies the Carthusian ideal of isolation from the world.

The prior’s choice of patron saints has been connected to his earlier career as a Teutonic Knight, a military religious order that looked after the relics of Elizabeth of Hungary, a noblewoman who renounced worldly goods to devote herself to the poor and who is depicted as a nun in the Frick panel.

Saint Barbara is shown in both the Frick and Exeter panels with her attribute, the tower where her father imprisoned her to prevent (unsuccessfully) her conversion to Christianity. Barbara was the patron saint of artillerymen and, as such, was especially revered by the Teutonic Knights. The story of her confinement in the tower must have also resonated with the reclusive Carthusians: during the late Middle Ages, charterhouses often were compared to prisons.

The Virgin features as central object of veneration in both the Frick and Exeter panels, as she does in a diptych and clay tablet (both lost) that Vos is known to have owned. This reflects not only the ubiquity of the Virgin’s cult during the late Middle Ages, but also her importance as patron of the Carthusian order.

Because of its diminutive size (7 5/8 x 5 1/2 in.), it is probable that the Exeter Virgin served a devotional purpose. As the fourteenth-century Carthusian writer Guillaume d’Ivrée recounted, such images were frequently found in monks’ cells, where they were meant to “excite devotion and imagination, and augment devotional ideas.”

This is consistent with meditative practices of the period, which relied on physical images to help conjure mental ones. Images provided the crucial first step for this spiritual progress: they helped focus the monks’ minds and allowed them to visualize themselves in the presence of holy beings.

Looking at his own likeness in the company of the Virgin, Christ, and Saint Barbara would have helped Vos visualize this divine encounter in his mind’s eye.

This reliance on mental images and visualization is not so different from exercises promoted by mindfulness meditation today. Images were all the more important for an order whose members spent the majority of their time in their cells, in solitary prayer: images, especially ones as rich in detail as the Frick and Exeter Virgins, would have offered endless possibilities for examination, helping to relieve the mental strain of complete isolation.

The function of the Frick Virgin is more difficult to ascertain. Previous studies have identified it as either a devotional work or an altarpiece. A recent examination of the archives of the Utrecht charterhouse—where Vos took the panel after leaving Bruges in 1450—provides compelling evidence that it had served as his memorial, a type of funerary monument popular in northern Europe during the late fourteenth and fifteenth centuries. Broadly defined, memorials (also called votive tablets or epitaphs) were large painted or sculpted tablets, which depicted a deceased donor being introduced by saints to holy figures—in most cases the Virgin and Child—whose intercession they sought.

This was not the first time that Van Eyck was commissioned to paint a memorial: his monumental 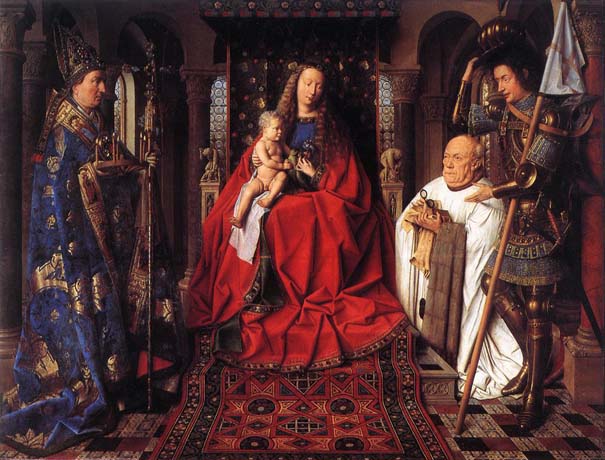 Virgin and Child with the Canon Joris van der Paele (ca. 1434–36) originally hung in Bruges’ Church of Saint-Donatian, above Van der Paele’s grave. (It is now in the Groeningemuseum in Bruges.) 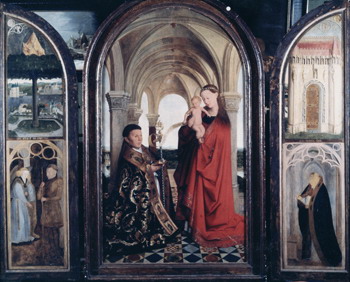 Another memorial by the artist, The Virgin and Child with Nicolas van Maelbeke,was completed probably around the time Vos arrived in Bruges.


Although lost, the panel is known through two silver point drawings from about 1445 (now in the Germanisches Nationalmuseum in Nuremberg and the Albertina, Vienna). The latter, attributed to Petrus Christus, is featured in the exhibition. This composition inspired the Exeter Virgin and shows the impact of Van Eyck’s legacy on the younger painter.

When Vos began his tenure as prior of Genadedal, he was probably in his fifties, at an age when one usually started planning for death. By then Van Eyck had completed his memorials for Van der Paele and Van Maelbeke, which may have been known by Vos, perhaps prompting him to commission the artist to produce a similar(thoughmore modest) in size memorial for himself.

In 1443, about two years after the completion of the Frick Virgin, Vos petitioned his acquaintance, Bishop Martin de Blija, to attach to the memorial an indulgence—that is, a grant that promised passers-by a remission of time served in purgatory in exchange for their prayers.

Specifically, the indulgence guaranteed forty days of pardon to whoever would greet the Virgin in the Frick panel with the Ave Maria, the first line of which, significantly, appears embroidered on the canopy behind the Virgin, suggesting that Vos planned from the onset of the commission to seek an indulgence for the panel. The painting’s imagery thus invited viewers to recite the indulgenced prayer. The indulgence could also be gained by saluting the panel’s images of Saint Barbara or Saint Elizabeth by reciting both the Ave Maria and the Pater Noster.

Forty-day indulgences were by no means uncommon duringthe late Middle Ages, and they were frequently granted to encourage prayers in front of newly made images. As a spiritual privilege granted to the Carthusians, the indulgence was only valid as long as the image remained within the order. Thus, on the walls of The Frick Collection, the Virgin has lost its supposed power of spiritual remission.

What prompted Vos to seek an indulgence for his memorial? Effectively, the indulgence made the painting’s beholder a mutually beneficial offer: in addition to benefitting Vos’s soul, the recitation of special prayers in front of 5 the panel would also improve the viewer’s prospects for salvation through the remission offered by the indulgence. Vos thus used the indulgence to call attention to his memorial and incentivize suffrages for his soul among his fellow monks. In procuring the indulgence, Vos transformed the panel into a currency in the economy of salvation that pervaded the era.The Frick and Exeter Virgins survived the destruction of the Bruges and Utrecht charterhouses during the religious wars, in 1578 and 1580 respectively.

While Vos’s body lies anonymously somewhere beneath the residential buildings that now stand on the site of the Utrecht charterhouse where he died in 1462, his memorial hangs on the walls of The Frick Collection. Venerated today for its artistic qualities rather than as an object that helped one secure salvation,Vos’s memorial has fulfilled its function, though perhaps not in the way that he had anticipated: it has kept alive the memory of this Carthusian monk, whose patronage of Van Eyck and Petrus Christus gave us two masterworks of early Netherlandish painting. 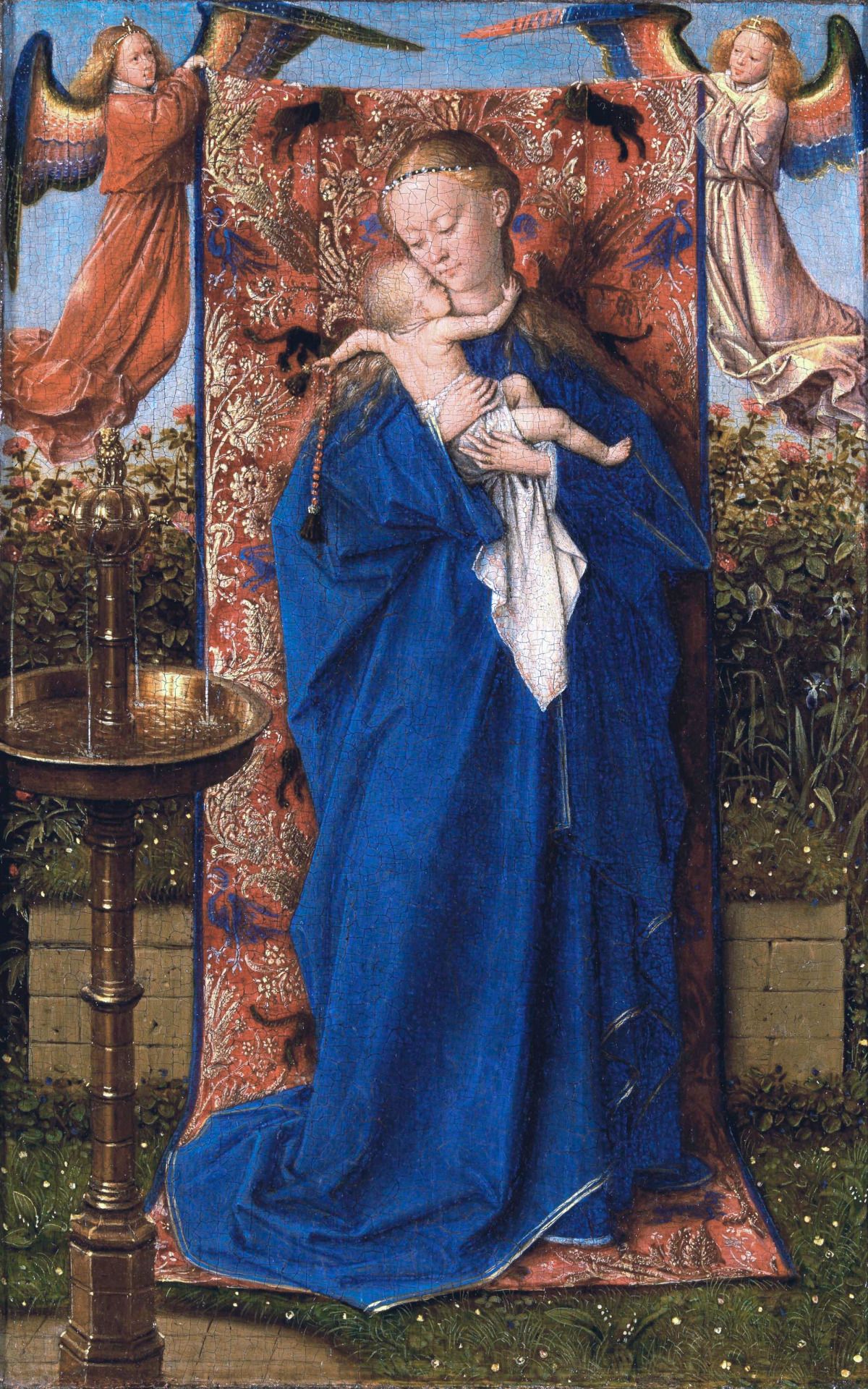 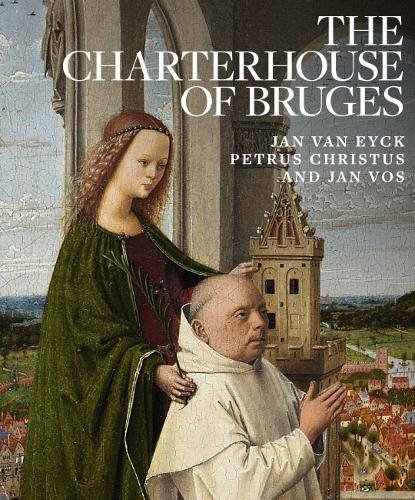 The exhibition is accompanied by a beautifully illustrated catalogue written by curator Emma Capron with essays by Maryan Ainsworth, Curator of European Paintings at the Metropolitan Museum of Art, and Till-Holger Borchert, Director of the Bruges Museums. It is published in association with D Giles Limited. Drawing on recent technical examination information and new archival research on the works commissioned by Jan Vos, the volume explores the panels’ creation, patronage, and function in their rich Carthusian context. The book is hardcover, 160 pages, with 85 color illustrations.


Posted by Jonathan Kantrowitz at 5:40 AM