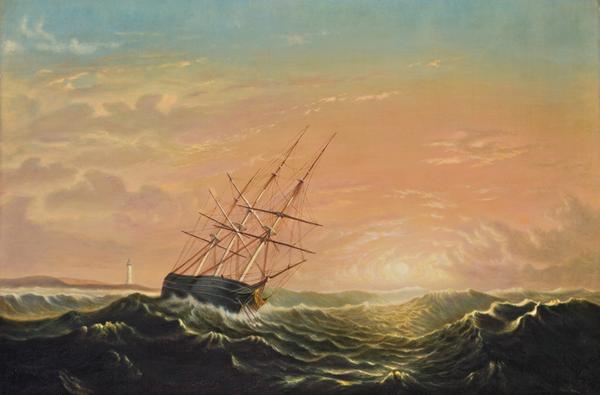 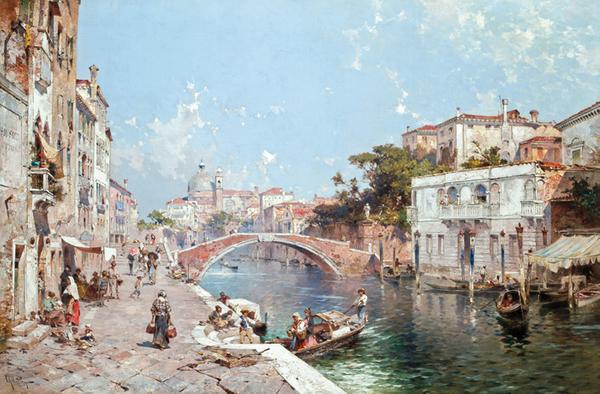 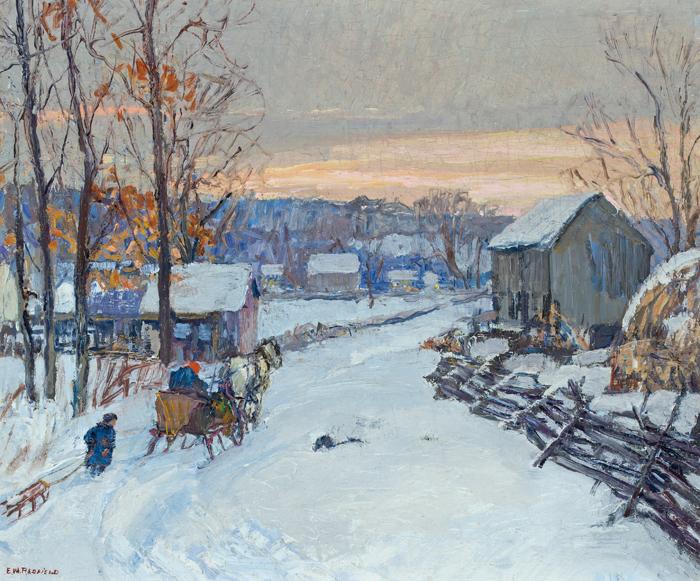 
Shannon’s Fine Art Auctioneers will kick off the fall auction season in grand fashion with an Oct. 24 sale showcasing 200 works of art in an array of genres, to include the Hudson River School, the Cape Ann School, the New Hope School, American Impressionists, American and European Modern and Abstract artists, 19th century European artists and Orientalist artists.

The event will take place live, in Shannon’s gallery located at 354 Woodmont Road in Milford, and online, via Artfact.com. There will also be 20 phones available for phone bidding. An online catalog, showing all the lots, may be viewed on the Shannon’s website. The auction will begin promptly at 6 p.m. (EST). Previews will be held daily, Oct. 15-24, from 11 a.m-5:30 p.m. (closed on Sunday).

“We only conduct two sales a year, one in the spring and one in the fall. For every consignment we accept we probably turn away twenty artworks, so this auction represents a wide range of top-quality pieces, at price points that will appeal to the novice collector as well as the seasoned veteran,” said Sandra Germain of Shannon’s. “There really is something for everyone.”

Two works are expected to vie for top lot of the sale. One is a newly discovered marine rendering by Mary Blood Mellen (Am., 1817-1882), titled Ship at Sea (est. $200,000-$300,000). The oil on canvas is signed lower left and measures 24 by 36 inches. Mellen was a 19th century Hudson River School artist who lived in Massachusetts and studied under Fritz H. Lane.

The other is an original oil on canvas by the Austrian painter Franz Richard Unterberger (1838-1902), titled Canal in Venice. A masterpiece measuring 31 ¼ by 47 inches, the painting is expected to gavel for $150,000-$250,000. Unterberger is best known for his colorful, romantic Italian views. He was born in Innsbruck but worked and studied throughout Europe.

Two examples from the New Hope School are expected go generate interest. The first is an oil on canvas winter scene by Edward Willis Redfield (Am., 1869-1965), titled Sleigh Days (est. $100,000-$150,000). The 20 by 24 inch work is signed lower left and was executed circa 1917. Redfield was an Impressionist landscape painter, best known for his snowy scenes.

The second is a colorful rendering of women and children outdoors by Rae Sloan Bredin (Am., 1881-1933), titled In June (est. 50,000-$75,000). The oil on canvas is signed lower left and measures 12 by 14inches. Bredin was known for his landscapes and portraits. He co-founded the Philadelphia School of Design for Women and the New York School of Fine Arts.

Fans of Modernism will have much to choose from, first with a gouache work by Gerome Kamrowski (Am., 1914-2004), titled Burning Spider Web (est. $40,000-$60,000). The 19 ¾ inch by 24 inch painting is signed upper left and dated (1946). Kamrowski was an avid participant in the Surrealist Movement. His work balanced fluid automatism with powerful abstract imagery.

Another Modernist of note is Nicholas Krushenick (Am., 1929-1999), whose 1967 acrylic on canvas work titled United Color Kit is expected to fetch $30,000-$50,000. The signed and dated work measures 51 by 39 inches. Krushenick took Pop Art to a whole new level. His use of primary colors and outlines of hard-edged geometric shapes were unique to the artist.

To round out the Modernist group is an oil canvas rendering of four red, white and blue shapes against a stark white background by Paul Feeley (Am., 1910-1966), titled Alphard (est. $30,000-$50,000). The 80 by 80 inch work is signed, titled and dated 1964 on the reverse. Feeley liked canvases with simple geometric forms in repeating groups, often using upright bluster shapes.

The British-born artist Edward Moran (Am., 1829-1901) was a student at the Royal Academy before establishing a studio in New York City in 1872 (he also lived in Paris for many years after 1877). He became renowned for his marine paintings and the one in this sale, titled Summer Morning, New York Bay (est. 70,000-$90,000) is a stunning example of Moran’s work.

Two paintings by the classical second generation Hudson River School artist (Am., 1827-1908) will come under the gavel. The first is a rare view of Lake Champlain, which is bordered by Vermont and New York, titled Split Rock, Lake Champlain (est. $25,000-$35,000). The 12 by 20 inch oil on canvas is monogrammed lower left, signed and dated 1871.

The second is also monogrammed, signed and dated (1878) oil on canvas, titled Study of the Delaware at Hancock (est. $30,000-$50,000). The painting measures 16 by 26 inches. Johnson was a landscape artist based in New York City who was noted for his ability to delineate accurately rock formations and foliage. He was heavily influenced by Jasper Francis Cropsey.

Walter Launt Palmer (Am., 1854-1932) became famous for his use of color to exemplify reflections in snow and water. His use of blue and pink in the shadows of the snow makes the oil on canvas painting Winter Stream (est. $40,000-$60,000) a fine example of the artist’s work. The 28 by 28 inch rendering is signed lower left.

Historically, Shannon’s has specialized in American and European art executed between 1840 and 1940. In recent years the firm has expanded more into post-war Modern and Pop art. Shannon’s produces an extensive 160-page, color catalog, which is available for sale on their website (shannons.com). An eight-page, oversized color brochure is also mailed out to 18,000 clients.