Frederick Childe Hassam (he later discontinued the use of his first name) was born on October 17, 1859 in Dorchester, Massachuset. His ancestors had come from England to America, with the original family name Horsham, in the seventeenth century. In 1876 he was apprenticed to a local wood-engraver and soon thereafter became a free-lance illustrator. In the evenings he attended the life class at the Boston Art Club, then briefly studied anatomy with William Rimmer (1816-1879) at the Lowell Institute, and took private lessons from the German-born painter Ignaz Gaugengigl (1855-1932).

In 1883 Hassam and his friend, the painter Edmund H. Garrett (1853-1929), traveled to Great Britain, Holland, Spain, and Italy, where Hassam produced a large number of watercolors that were exhibited at Williams & Everett Gallery in Boston later that year. Once home, in 1884, Hassam married Kathleen Maude Doane and lived in Boston until the spring of 1886 when the couple left for Europe.

In Paris, Hassam studied figure painting with Gustave Boulanger (1824-1890) and Jules Lefebvre (1836-1911) at the Academie Julian, and exhibited his work at the Salons of 1887 and 1888.
When they returned to the United States in 1889 the artist and his wife settled in New York. Hassam subsequently assisted in founding the New York Watercolor Club and joined the Pastel Society of New York. He also began to exhibit with the Society of American Artists, with whom he remained until withdrawing in 1897 as a founder of the group that would become known as The Ten.

During the 1890s and the following two decades Hassam spent his summers painting in locations throughout New England, such as Gloucester, Massachusetts; Cos Cob, Connecticut; and Newport, Rhode Island. His favorite settings, however, were Old Lyme, Connecticut, and Appledore, on the Isles of Shoals, off the coast of New Hampshire, where he produced some of his best known images. After 1920 the Hassams' permanent summer home became East Hampton, Long Island.

A prolific and industrious artist, Hassam produced numerous scenes of both the city and the countryside. Many of his early street scenes of Boston, Paris, and New York, with their reflections of wet pavement or of gaslight on the snow, evidenced a wonderful talent for capturing the effects of light and atmosphere. While he recorded nearly all aspects of busy city life, he seldom focused on the seamier subjects that often attracted painters of the Ash Can School.

Throughout his career Hassam won numerous awards and prizes and earned the serious attention of the American collectors George A. Hearn, John Gellatly, and Charles Freer. His work was widely exhibited at established museums throughout the country. In the 1913 Armory Show Hassam was represented by six paintings, five pastels, and a drawing. About 1915 he began to turn in his efforts to printmaking, producing etchings and drypoints at first, and lithographs about two years later. By 1933 a catalogue raisonné of his intaglio prints identified 376 different plates. Toward the end of his life Hassam most often exhibited graphic works. The quality of his paintings, in the meantime, became increasingly uneven.

Of the American artists called impressionists, Childe Hassam was among those whose work most closely followed that of their French colleagues. Although Hassam was not a novice, but already a practicing artist when he began to study in Paris, it is apparent that he soon absorbed aspects of the avant-garde styles of that time and place. (Hassam himself chose to minimize his connection to the art of France, indicating that he was influenced, if at all, by the plein-air prototypes of nineteenth century English painters such as Constable, Turner, and Bonington, perhaps in recognition of his own national origins.) By the time Hassam turned wholly to impressionism, the style had been introduced into the United States for several years and the bright colors and broken brushwork of his images found a ready audience.

Despite his bewilderment concerning some of the changes in contemporary art toward the end of his life, Hassam continued to express faith in the future of American art. Shortly before his death, in East Hampton in August 1935, he arranged to bequeath all the paintings remaining in his studio to the American Academy of Arts and Letters. According to his wish these were sold to establish a fund for the purchase of American works which were then presented to museums. The sale is led by Frank Weston Benton’s dazzling work, The Reader, which depicts an iconic Impressionist subject; the artist’s eldest daughter is enjoying a beautiful summer day reading outside while perched under a parasol (estimate: $2,500,000-3,500,000). The Reader is a prime example of the Maine summer paintings that embody the pinnacle of Benson’s career-long play with light, and the work has been in a private collection for 40 years. 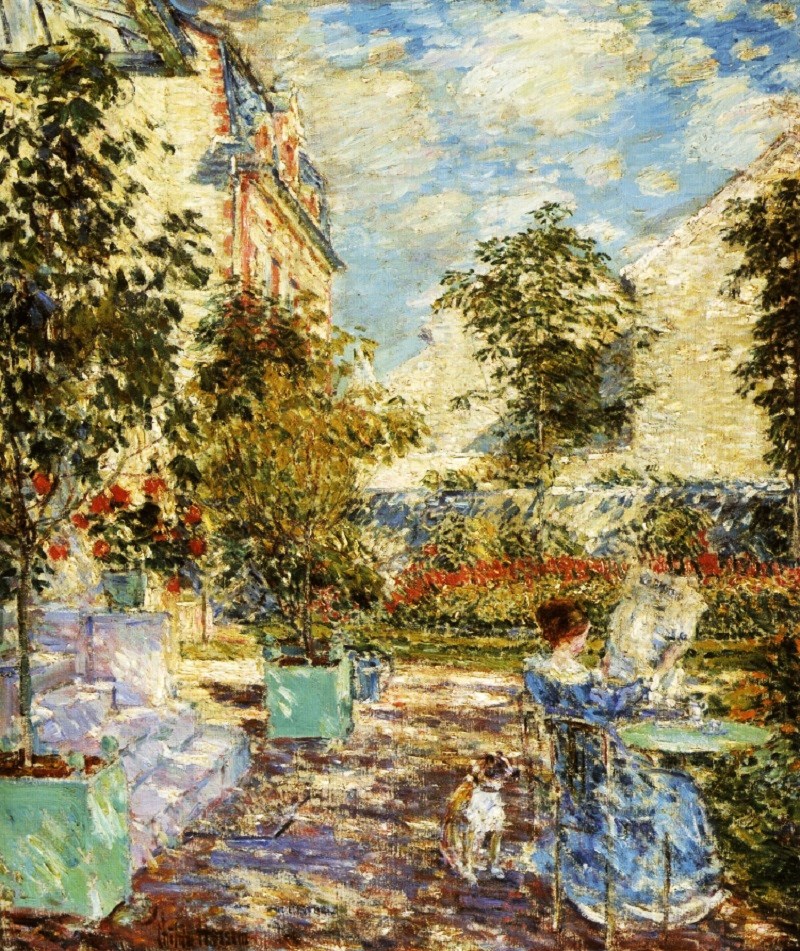 IN A FRENCH GARDEN 
May Day, Way Up Town 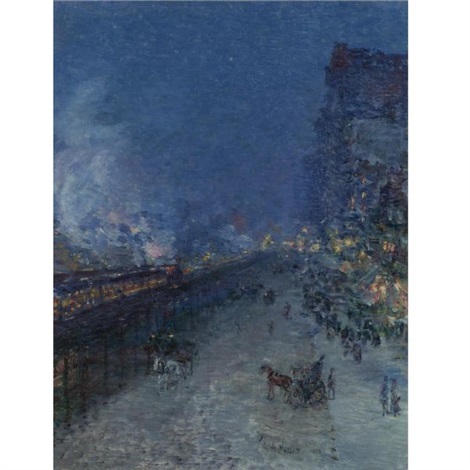 Posted by Jonathan Kantrowitz at 9:24 AM