THE FINAL AND UNDISPUTABLE CULMINATION OF THE FAMOUS FEMMES D'ALGER SERIES
PREVIOUSLY IN THE COLLECTION OF VICTOR AND SALLY GANZ
SIGNATURE WORK TO LEAD CHRISTIE’S
Looking Forward to the Past:
A Curated Evening Sale
Monday, May 11, 2015 at Christie’s Rockefeller Center

This painting will be one of several masterpieces offered in ‘Looking Forward to the Past’, a sale created in the spirit of the many great curated auctions Christie’s has organized in New York and London in recent years. This majestic, vibrantly-hued painting is the final and most highly finished work from Picasso’s 1954-55 series in which he looked back to 19th century French master Eugene Delacroix for inspiration, and in the process created a new style of painting.  Previously sold at Christie’s in 1997, as part of the legendary record-breaking sale of the Collection of Victor and Sally Ganz, this iconic work promises to cause a sensation on the global art market this spring.  Christie’s has estimated the work to realize in the region of US$140 million.

Les femmes d’Alger (Version “O”) is among the first announced highlights of Looking Forward to the Past, an innovative addition to the spring calendar of auctions at Christie’s New York this May.  This tightly-curated sale focuses on the major artists of the 20th century and reflects a growing trend of cross-category collecting among Christie’s clients.

“From the auctioneer’s rostrum it has become clear that the many new global collectors chasing masterpieces have been waiting for an iconic Picasso to appear on the market. None is more iconic than Les femmes d'Alger. The sale on Monday 11 May promises to be a sale to remember,” said Jussi Pylkkanen, Christie’s Global President. 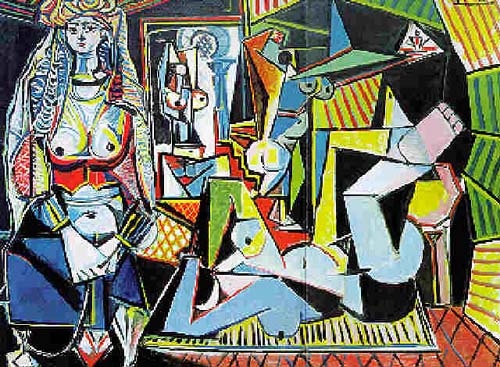 “Les femmes d'Alger, (Version “O”) is the culmination of a herculean project which Picasso started after Matisse’s death, in homage to his lost friend and competitor, and which over a period of 2 months and after nearly 100 studies on paper and 14 other paintings led to the creation of this phenomenal canvas in February 1955. With its packed composition, play on cubism and perspective, its violent colors, and its brilliant synthesis of Picasso’s lifelong obsessions, it is a milestone in Picasso’s oeuvre and one of his most famous masterpieces, together with Les demoiselles d’Avignon, 1907 and Guernica, 1937. One can arguably say that this is the single most important painting by Picasso to remain in private hands. Its sale on 11 May will be a watershed moment in the market for 20th century art,” stated Olivier Camu, Deputy Chairman, Impressionist and Modern Art.

“In today’s fast-paced world, it Is remarkable to think that Picasso’s Les femmes d’Alger exhibits as much freshness of perspective and approach as it did when it was painted,” declared Loic Gouzer, International Specialist, Post-War and Contemporary Art, who curated the ‘Looking Forward to the Past’ sale.

LOOKING TO DELACROIX, CREATING A MASTERPIECE

Picasso painted a series of fifteen variations on

between December 1954 and February 1955, designated as versions A through O. Throughout his series, Picasso references the Spanish master’s two versions of the shared subject, intermingling their elements.  Picasso is quoted as having an imaginary conversation with Delacroix, “You had Rubens in mind, and painted a Delacroix. I paint [the Les femmes d’Alger series] with you in mind, and make something different again," (ed. M. McCully, A Picasso Anthology: Documents, Criticism, Reminiscences, London, 1997, p. 251).

Picasso had been fascinated by Delacroix all his adult life, and by Les femmes d'Alger in particular. Picasso’s companions testify to this intense fixation; Sir Roland Penrose states, “This picture haunted his memory,” (R. Penrose, Picasso: His Life and Art, Berkeley, 1985 (3rd ed.), p. 395).  In her 1964 book, Francoise Gilot recounted: “He had often spoken to me of making his own version of Femmes d’Alger and had taken me to the Louvre on an average of once a month to study it. I asked him how he felt about Delacroix. His eyes narrowed and he said, “’That bastard. He's really good.’”

In addition to being an homage to Delacroix, Picasso conceived the series as an elegy to his friend and great artistic rival, Henri Matisse. Matisse had died in November 1954, five weeks before Picasso began the series. Matisse viewed Delacroix as his immediate forebear in terms of color and Orientalist subject matter. Carrying this legacy forward, Picasso stated, “When Matisse died, he left his odalisques to me as a legacy,” (R. Penrose, Picasso: His Life and Art, Berkeley, 1985 (3rd ed.), p. 396).

Over the years, Les femmes d'Alger (Version ‘O’) has been featured prominently in major Picasso retrospectives all over the world, including at The Museum of Modern Art, New York in 1957 and 1980, The National Gallery in London in 1960, the Grand Palais, Paris in 1966-1967, The Metropolitan Museum of Art, New York in 1968, and more recently at the survey ‘Picasso et les Maîtres’ at the Louvre in 2008-2009, as well as at ‘Picasso: Challenging the Past’, at London’s National Gallery in 2009, and ‘Picasso & Modern British Art’ at the Tate Britain in 2012.

THE GANZ PROVENANCE
Les femmes d’Alger (Version “O”), 1955 last appeared at auction in 1997, as a key highlight of Christie’s sale devoted to the celebrated collection of Victor and Sally Ganz. The Ganzes were the original owners of the the full, 15-painting series Les femmes d’Alger, bought directly from Picasso’s dealer Daniel Kahnweiler, who had cannily insisted that one buyer purchase the entire group. Victor and Sally Ganz complied, acquiring the series on June 6, 1956 for $212,500. They later sold ten to the Saidenberg Gallery, keeping Versions C, H, K, M and O for themselves. Version C was sold in 1988 following the death of Victor Ganz, and the remaining four, including Version “O”, were sold as individual lots at the 1997 sale at Christie’s New York. 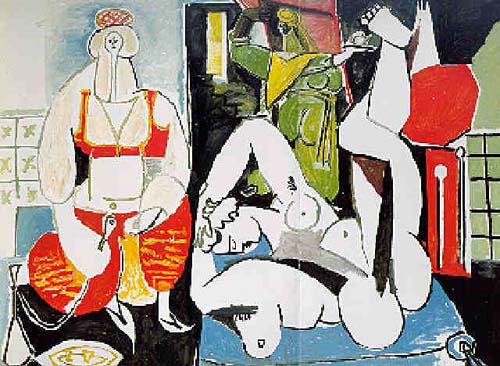 The collection totaled $206.5 million, setting an auction record for any single-owner collection at the time. Les femmes d’Alger (Version “O”) was sold for $31,902,500, more than twice its high estimate of $12 million.
Posted by Jonathan Kantrowitz at 10:35 AM