Sotheby’s Impressionist & Modern Art Evening Sale on 4 February will include three works recently restituted to the heirs of Gaston Lévy, one of the most notable patrons and art collectors living in Paris in the 1920s and 1930s. A highly successful businessman and property developer, Lévy and his family lived in a magnificent apartment on the Avenue de Friedland, which he filled with books, paintings and works of art, many of which he bought from the great dealers of his day, including BernheimJeune, Paul Durand-Ruel and Ambroise Vollard.

Lévy’s art collection was dispersed under the Nazi occupation, and two of the works to be offered in February were lost to the ‘Einsatztab Reichsleiter Rosenberg’ (an organisation dedicated to receiving looted cultural property) in October 1940. After the war, the works were repatriated to the French state, and have recently been restituted by the French Government to Lévy’s heirs from the Musée d’Orsay in Paris.

Signac’s Quai de Clichy. Temps gris – had been stored in the Lévy’s country home, the Château des Bouffards, but later found its way into the collection of the dealer Hildebrand Gurlitt, whose illicit hoard was discovered by the authorities in 2012.

The jewel of the group is a Pointillist masterpiece by Camille Pissarro. Painted with enormous thought and dedication over a period of some six months, Gelée blanche, jeune paysanne faisant du feu depicts a young woman and child building a fire on a cold winter’s morning, where every brushstroke works to bring to life the movement of smoke in the wind.

Through his patronage of the Pointillists, Lévy also formed a lifelong friendship with Signac, holidaying with the artist as well as sponsoring his project to paint 107 ports in France – securing his first pick from every batch of watercolours. Over the arc of his collecting career, Lévy owned forty-four oils by the artist. The auction will offer two paintings from different points in Signac’s oeuvre – transporting the viewer from a brisk morning in a Parisian port to the exotic delights of Istanbul’s waterside. 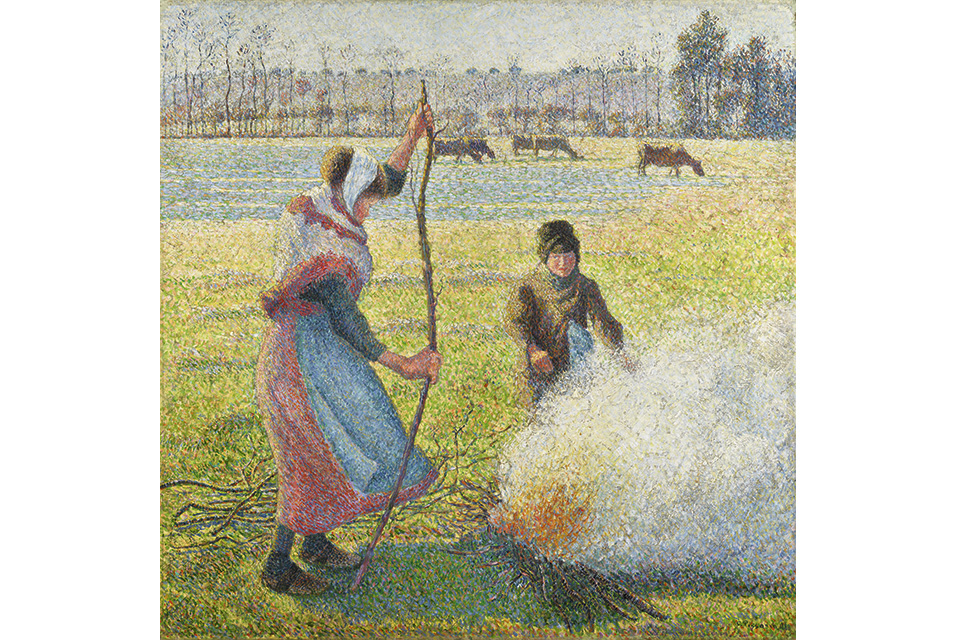 CAMILLE PISSARRO
Gelée blanche, jeune paysanne faisant du feu, 1888, oil on canvas, 92.8 by 92.5cm. (est. £8,000,000 – 12,000,000)
One of Pissarro’s greatest achievements, this tour-de-force of light and colour also ranks among greatest examples of Pointillism ever created. The creation of this extraordinary work was – as Pissarro’s letters from the time attest – a labour of love. Some six months in the making, Gelée blanche, jeune paysanne faisant du feu stands apart from the main body of his work, wherein the artist’s deep understanding of the new, scientific colour theory was harnessed to extraordinary artistic effect. Pissarro completed the work in time for the 6th exhibition of the Cercle des XX in Brussels, where it was heralded as a tour de force in Neo-Impressionism.

Conceived on a grand scale, the painting captures the effects of both heat and cold in a brilliant rendering of the complexities of light and atmosphere. Against the backdrop of the low sun casting shadows on the meadows and the lingering night frost, smoke rises with a shimmering heat, resulting in a remarkable and uniquely nuanced representation of fire, smoke and cold air that is yet to be matched.

The subject of the burning fire – and the challenge of representing it – was something that clearly intrigued Pissarro throughout his career. He returned to this particular subject no fewer than six times – twice in oil, and four times on paper (an example of which can now be seen in the Ashmolean Museum in Oxford).

In addition to the brilliance with which the effects of light, fire and wind are rendered, Gelée blanche, jeune paysanne faisant du feu is also testimony to Pissarro’s empathetic approach to the human condition. In many ways, his interest in painting the working classes is what distinguishes him from so many of his contemporaries. In making humans the subject of his works – figures with landscapes, rather than figures within landscapes – he stands out as the great humanist among the Impressionist and Neo-Impressionist painters, marking out his independence from them.

This painting has previously been exhibited at many institutions internationally including Paris’ Musée de l’Orangerie and Musée d’Orsay, Tokyo’s The Bunkamura Museum of Art and São Paulo’s Centro Cultural Banco do Brasil, to name a few. 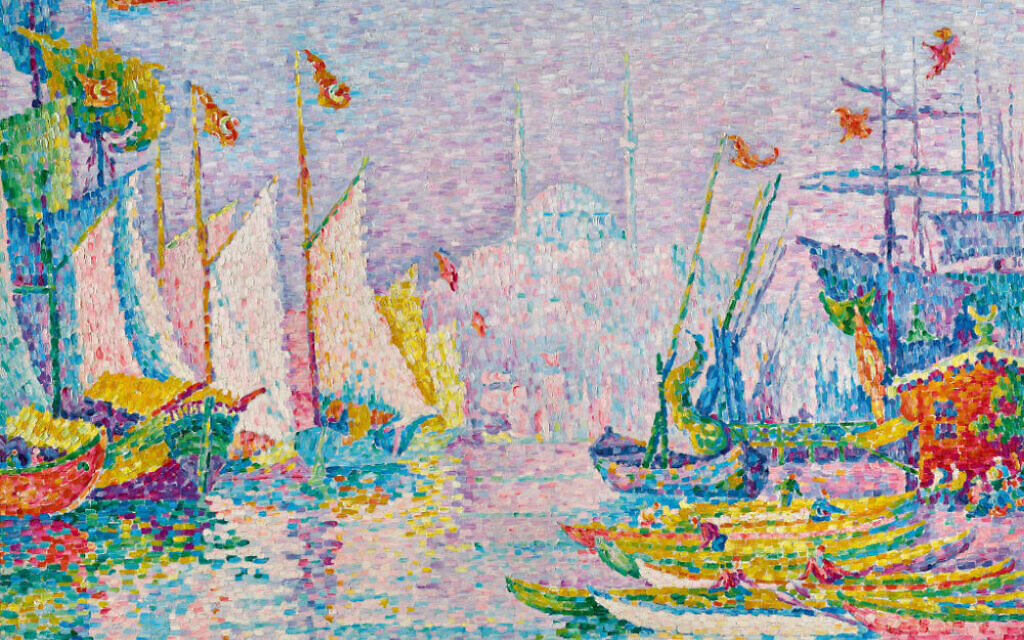 La Corne d’Or. Matin, 1907, oil on canvas, 73 by 92cm. (est. £5,000,000 – 7,000,000)
Paul Signac’s two great passions in life were painting and sailing, and when the artist first travelled to Istanbul in the spring of 1907 – an adventurous endeavour to pastures new – he was immediately struck by the unique quality of light and colour that filled the ancient city.

The historic location inspired twelve paintings, all of which take as their subject the Golden Horn, a busy waterway teeming with life near the port of Istanbul, that was one of the key entrances to the Ottoman capital at the time. In this ethereal work, the skyline of the city is easily recognisable in the background, with the famous minarets of the Hagia Sophia an unmistakable silhouette on the horizon.


In November 2019 another view of Constantinople was sold at Sotheby’s in New York for $16,210,000. The brilliant luminosity of the composition, bathed in the morning light, is typical of Signac’s late style – showing the influence of Fauvism – and is wonderfully effective here in paying homage to the historical legacy and richness of the city, whilst rendering it in a completely fresh and modern way. 
Quai de Clichy. Temps Gris, 1887, oil on canvas, 46 by 65.5cm. (est. £600,000 – 800,000)
This elegant, pointillist observation of the Quai de Clichy is a classic example of Signac’s Opus pictures, paintings he considered ‘complete compositions’ which are now seen as his earliest and greatest contributions to Neo-Impressionism.

Signac’s family moved to the northwest of Paris in 1880, to a suburb running along the river Seine. The varied landscape of the region – comprising both the river and factory chimneys – provided a great source of inspiration to the young artist, fulfilling his interests in sailing, science and innovation. In the year this was painted, Signac was joined in his painting expeditions around Clichy by Vincent van Gogh, who depicts the bridges just further up from this composition.

The work was discovered in the possession of Cornelius Gurlitt, a reclusive art hoarder who died in 2014, and having been identified as looted by the Nazis, was restituted by the estate to the heirs of Gaston Lévy in July 2019. The sister composition of Quai de Clichy. Soleil is now in the Baltimore Museum of Art.
1 - 33 of 33

STUDY OF A BLACKSMITH

Posted by Jonathan Kantrowitz at 6:06 AM