The sinuous, curving ornamental motif known as arabesque has ancient sources and first appeared in Islamic cultures as a form of sacred writing. It figures in key movements in European art, from Renaissance grotesques to Rococo interiors, on through Art Nouveau and beyond. Bridging cultures and materials, arabesque did not settle into a single form or style but rather burst open the aesthetic possibilities available to artists, tracing a winding path from decorative border to overall principle of design. The nineteenth-century flowering of this motif is explored in the Clark Art Institute's exhibition Arabesque, on view December 14, 2019-March 22, 2020. Forty-five works across a variety of media trace the development of the arabesque line from the highly detailed compositions of the German Romantics through the pictorial experiments of Nabi and Art Nouveau artists.

Paul Elie Ranson's "Tiger in the Jungle," on loan from the Williams College Museum of Art.


"The Arabesque exhibition provides a fascinating look at the influence of this beautiful design motif across generations and across a number of artistic disciplines. Drawn from museum collections across the country-as well as works from the Clark's own collection and that of our neighbors at the Williams College Museum of Art-it is a visually stunning display that will encourage our visitors to explore the evolution of this important decorative motif and its influence on so many artistic movements," said Olivier Meslay, Hardymon Director of the Clark. "We are indebted to the many generous lenders who help to bring these works to the Clark, and to Clark Trustee Denise Littlefield Sobel, who provided generous support to the exhibition." 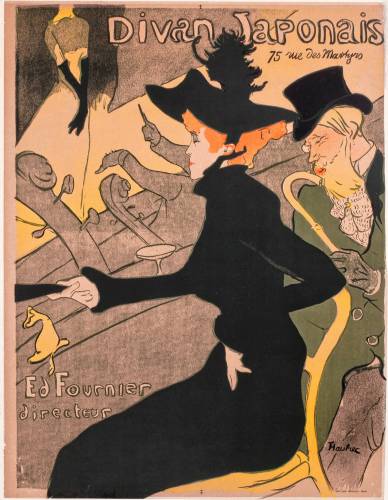 “Divan Japonais,” 1893 color lithograph by Henri deToulouse-Latrec. From the David and Alfred Smart Museum of Art, University of Chicago.

"Arabesque has complex cultural origins, and its reception by nineteenth-century European artists offers a fascinating story to tell," said Anne Leonard, Manton Curator of Prints, Drawings, and Photographs, and curator of the exhibition. "It was an engine for experimentation, not just in the visual arts but also in music, dance, and literature. This exhibition and its related programs will present arabesque as a kind of inter-arts metaphor for imaginative freedom and formal innovation."

Until about 1800, arabesque in European art typically served as a decorative addition to a central motif or larger design. That began to change with German Romantic artists such as Philipp Otto Runge (1777-1810), Peter von Cornelius (1783-1867), and Eugen Napoleon Neureuther (1806-1882). Inspired by developments in the literary realm, these artists pushed the boundaries of arabesque with experimental designs that crept well out of the traditional frame, sometimes occupying the entire composition.

Neureuther's drawing The Ballad of Lenore (1835) illustrates Gottfried August Bürger's poem of a young woman carried off to the grave of her lover, a soldier who has been killed in war and returns as a ghost. The sheet is remarkable for its compression of the narrative into five vignettes on a single sheet, divided by arabesque borders.

In Adolph Menzel's (German, 1815-1905) etching The Willow Tree (1843), the artist has shaped the trailing branches of the willow tree and joined them to the stalks of ground plants to form a continuous frame around the image. Menzel molds nature to the demands of art while presenting a scene of chivalric romance, comically watched over by a treetop figure. 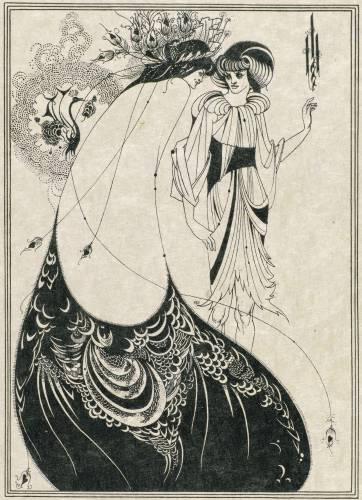 The medieval flavor of The Willow Tree recurs in a red ink drawing by Walter Crane (English, 1845-1915), Prince Charming in the Forest (undated). Like Menzel, Crane has formed tree branches into a sinuous pattern that both conceals and reveals the drawing's story. The image emerges from a negative space of surrounding foliage, with sprigs jutting out at three of the four corners. In both works, the arabesque line is central without overwhelming the composition or its narrative.

Islamic-Inspired Arabesque
The term arabesque, a French word derived from the Italian "arabesco," speaks to the motif's origins in the art and architecture of the Middle East and North Africa. But by the end of the eighteenth century, artists had little awareness of its origins outside of Europe. That began to change in the nineteenth century with a new historical awareness that prompted artists and designers to understand the roots of ornamental styles used in different times and places.

One of the most important figures to document the history and sources of arabesque design was the British architect and writer Owen Jones (English, 1809-1874), whose lavishly illustrated Alhambra (1842) and The Grammar of Ornament (1856) became essential sourcebooks for European artists and designers. Jones traveled to Spain's Alhambra Palace in 1834 and 1837 and made drawings that became the basis for his illustrations, lending authenticity to the volumes. Full-page plates from both of these fundamental publications are included in Arabesque.

The popularity of "Orientalizing" interior furnishings accelerated the domestic use of designs meticulously recorded by Jones and others. A large length of silk furnishing fabric inspired by Alhambra, on loan to the exhibition from the Museum of Fine Arts, Boston, demonstrates the adaptation of such patterns for the domestic sphere, far removed from their historical and architectural context.
Portable objects, such as mosque lamps, became collectible items for European home interiors in the late nineteenth century, coveted for their distinctive shape, ornate inscriptions, and decorative enameling and gilding. Philippe-Joseph Brocard (French, 1831-1896) began collecting these lamps as an antiques restorer in Paris and eventually learned the techniques to fabricate his own. A c.1880 example from the Clark's collection, modeled on an example from medieval Cairo, provides context to help visitors understand the widespread appeal of these exquisite lamps.
Art Nouveau furniture designer Carlo Bugatti (Italian, 1856-1940) developed an eclectic signature style using an unusual variety of natural materials. Both his architectural training and his fascination with Islamic art are evident in a table on loan from the Art Institute of Chicago, which incorporates Moorish arches and Arab calligraphy, among other decorative elements.
Arabesque as Design Principle
Some of the most productive and innovative European uses of arabesque in the nineteenth century occurred when artists laid aside preconceived notions about prior models and instead let the sheer energy of the arabesque line lead where it would. That approach yielded eccentric and extraordinary results like Aubrey Beardsley's (English, 1872-1898) illustrations for Oscar Wilde's Salome, of which three will be presented in Arabesque. Beardsley's highly original style and exquisite linework, influenced by Japanese prints and heralding Art Nouveau, attained a level of decorative refinement rarely seen before or since.
The sinuous, calligraphic lines of Tiger in the Jungle (1893) also evokes Japanese prints and Asian ink drawings, two profound influences on the Nabi artist Paul Ranson (French, 1861-1909). The simplicity of black ink on yellow-printed paper belies the great elegance and sophistication of Ranson's line, which shuns volume and perspective to present the muscular tiger as a flat, purely decorative motif.

Experiments with all-over arabesque by the Nabi artists culminated in the high-spirited poster designs of Alphonse Mucha (Czech, 1860-1939) and Henri de Toulouse-Lautrec (French, 1864-1901). 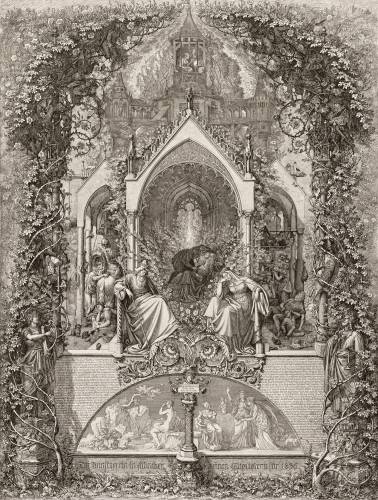 
Mucha's depictions of women could, through today's lens, be seen as generically beautiful and sensual, but upon closer examination the "Mucha woman" is not a single stereotype. In Zodiaque ("La Plume") (1896-97) she is angelic and virginal, in the guise of a Renaissance portrait. In Biscuits Lefèvre-Utile (1896) she is hearty and rustic. In both images, Mucha ingeniously blends the woman's looping and swirling hair with an abstract border pattern.

In contrast to Mucha's portrayal of fantasy abstractions, Toulouse-Lautrec portrayed well-known figures who were also his close friends, such as Jane Avril. Arabesque includes two works depicting the famous can-can dancer: Jane Avril (1899) from the Clark's collection and Divan Japonais (1893) from the Smart Museum of Art, University of Chicago. In the former, the subject herself embodies the arabesque form, her body twisting like the brightly colored snake on her black dress. In Divan Japonais, Avril is depicted seated rather than performing. The elegance of her upright form harmonizes with the arabesque shapes surrounding her: the curved back of her chair, her companion's hat and cane, the scrolls of the double basses in the pit orchestra, the hands of the conductor, and the performer onstage. 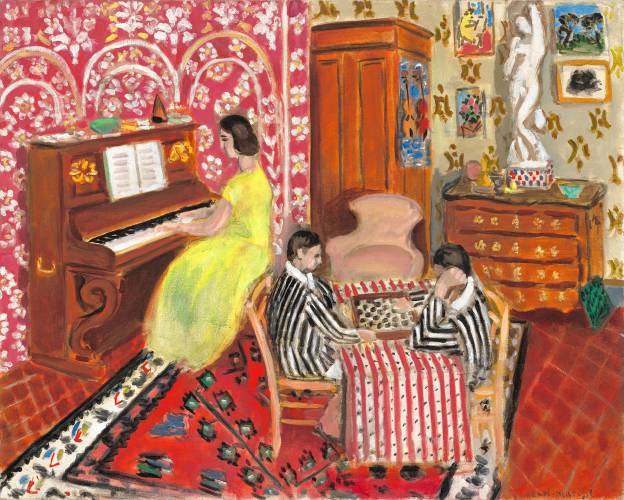 The idea of all-over arabesque is echoed in Henri Matisse's (French, 1869-1954) painting titled Pianist and Checker Players (1924). From the Oriental carpet on the floor to the wallpaper with its Moorish architectural echoes, there seems no end to the exuberant play of arabesque pattern and texture across the composition. The checkers game, an emblem of rule-bound order, holds sway at the center of this profusely ornamental yet harmoniously structured picture.

Two years before Matisse painted Pianist and Checker Players, the Ottoman Empire fell, confirming many Europeans' sense that the certainties of the old order had been destroyed. Hope of an all-encompassing harmony, decorative plenitude, or belief in a spiritual unity holding together the cosmos seemed to echo incoherently from another age. In such a climate of disillusionment, arabesque lost some of its relevance, though artists did not entirely abandon it: artists such as Pablo Picasso and Max Ernst made use of the device in their work. But because of arabesque's shape-shifting character, the variations on it may continue without end. As a symbol of imaginative freedom, it remains unrivaled. 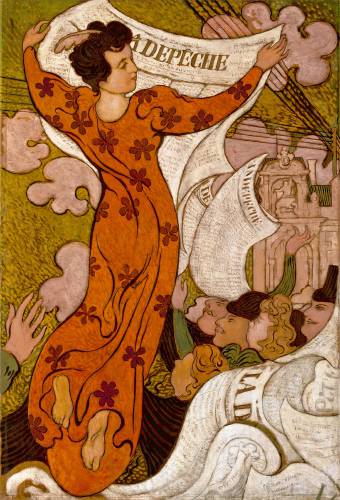