The Norton Simon Museum presents The Expressive Body: Memory, Devotion, Desire (1400­–1750), an exhibition that examines the ways in which the human form has provoked powerful responses, from the physiological to the mystical. In the early modern period—that is, the centuries following the Middle Ages—works of art were thought to have such power that they affected the viewer physically. From erotic paintings produced for wealthy patrons to venerated statues of the wounded Christ installed in local chapels, representations of the body stimulated visceral and often self-reflexive reactions of desire, compassion or aversion.
Culled from the Norton Simon’s collections, the more than 60 artworks presented in the exhibition include paintings, drawings, prints and sculptures from throughout Europe and Latin America, some of which have rarely been exhibited. The exhibition is on view in the Norton Simon Museum’s exhibition galleries on the lower level from April 17 through August 31, 2020.
The Expressive Body is organized around two major themes: “Love and Suffering” and “Accessing the Divine.” Within these sections are art objects that were created to be experienced in multisensory ways, including sculptures meant to be caressed, prints that were handled and even sacred images that were kissed (although not permitted today in a museum setting). Indeed, medical theory during this era suggested that even gazing at representations of beautiful lovers could have physical consequences, leading to the conception of handsome and healthy children, whereas spiritual practice could involve meditating on the portrayal of a tortured martyr in order to empathetically feel his or her torment.
The exhibition’s introductory section explores the notion of “The Body and the Senses,” providing context for the role of the body in perceiving art in the period. Included is Jusepe de Ribera’s fascinating painting The Sense of Touch from c. 1615–16. Seated at a wooden table, a blind man uses his hands to thoughtfully observe a carved head; a painting rests beside him, unexamined. By depicting the sense of touch in this way, Ribera engages with a major debate in the period over the merits of sculpture versus painting. Sculpture seems to be the victor here, since it can be perceived by both touch and sight, and is therefore the more accessible and verifiable of the arts. Ribera’s naturalistic rendering of the sculpture, however, also makes a case for the virtuosity of painting. The artist uses paint to create the effects of texture and weight, emphasizing the man’s wrinkled hands as they hold the bust. Through vision the painting appeals to the sense of touch, inviting viewers to imagine the sculpture’s smooth contours under their own fingertips.
The theme of love and suffering has long been explored by artists. In Francesco Trevisani’s Apelles Painting Campaspe from 1720, the artist blurs the line between real and represented bodies in his depiction of Apelles, the favorite painter of Alexander the Great, who painted a beautiful portrait of Campaspe, the ruler’s mistress. As the apocryphal story goes, the artist’s representation was so flattering that Alexander chose the painting over Campaspe herself. This clever interpretation, which would have amused 18th-century Roman patrons, makes an argument for the beguiling power of painting.
Also in this section is Guercino’s dramatic Suicide of Cleopatra from around 1621. This large painting depicts a moment of despair for the powerful queen, but like many images of this subject, the painting has erotic undertones. Guercino emphasizes the drama of the moment through the dynamic pose of the Cleopatra’s body, and he highlights her beauty with strong contrasts of light and dark. The soft lushness of her garments adds to the tactile nature of the painting, and contrasts with the perception of the sharp pain of the asp’s bite.
Religious images likewise had palpable effects, but to devotional ends. In the “Accessing the Divine” section, visitors will encounter the Head of Christ from 18th-century Mexico, a sculpture that invites worshippers to meditate on the physicality of Christ’s pain, brutally represented by his lacerated flesh and his lips parted in agony, subtly exposing delicately carved teeth. These details become all the more arresting in their three-dimensionality, mimicking the scale and appearance of a human head, and making the representation of the suffering Christ feel inescapably real. Polychrome sculptures like this one were common, but they caused anxiety among some religious reformers who feared that the sculptures would prompt too much empathy in viewers, leading them to treat the inert representations as living idols.
A more tender representation of Christ can be found in Baciccio’s Saint Joseph and the Infant Christ from around 1670–85. The artist represents the strong familial bond between the baby Jesus and his earthly father, Joseph, which was unusual, since such scenes of parental affection typically involved the Madonna and Child. Baciccio brilliantly portrays the recognizably human gesture of a baby reaching up to the face of his parent. The act of touching is a central component of this image—we can imagine the scratchiness of Joseph’s beard in Christ’s hands, or the weight of the baby in Joseph’s arms. Though the painting depicts a human moment between father and child, the monumentality of the figures reminds the viewer of the baby’s divine nature.
When presented together, the objects in The Expressive Body: Memory, Devotion, Desire (1400­–1750) reveal the historical potency of the represented body to move the mind through the flesh, and they invite us to examine our own responses to these works today. The exhibition is organized by Assistant Curator Maggie Bell and is on view in the Museum’s lower level exhibition galleries from April 17 through August 31, 2020. 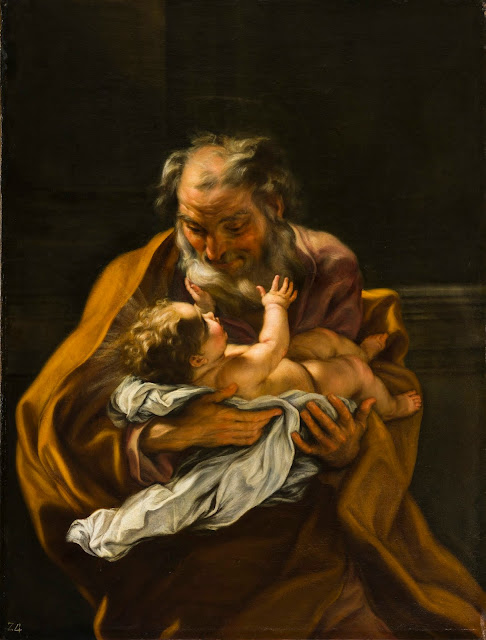 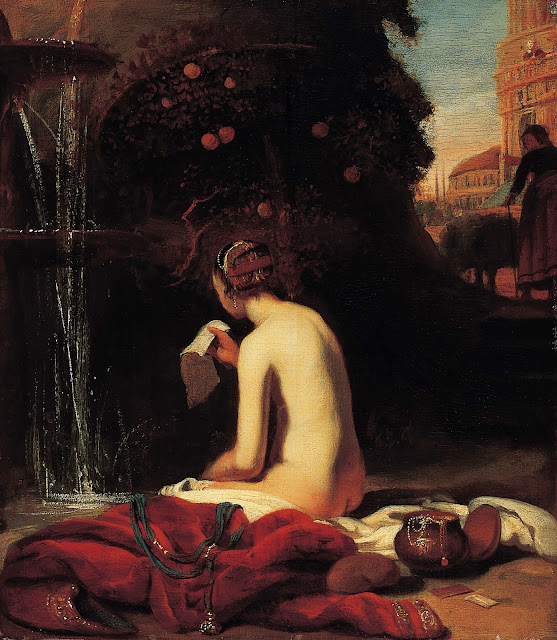 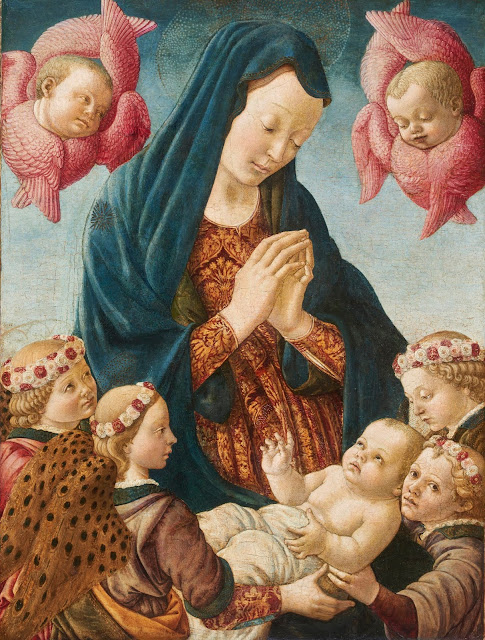 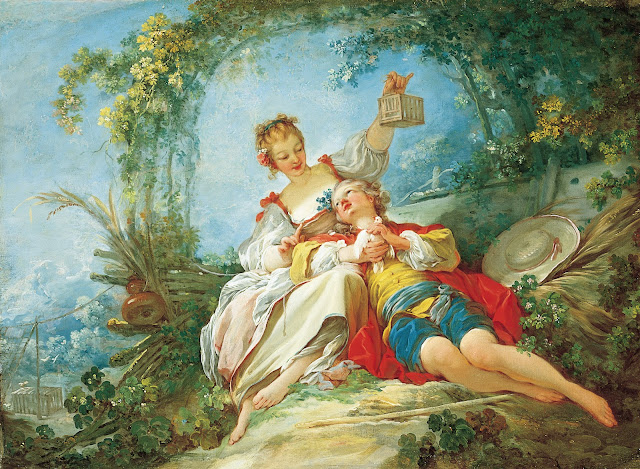 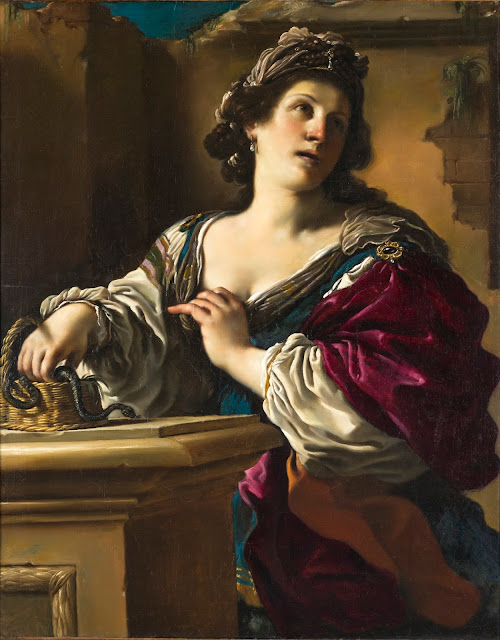 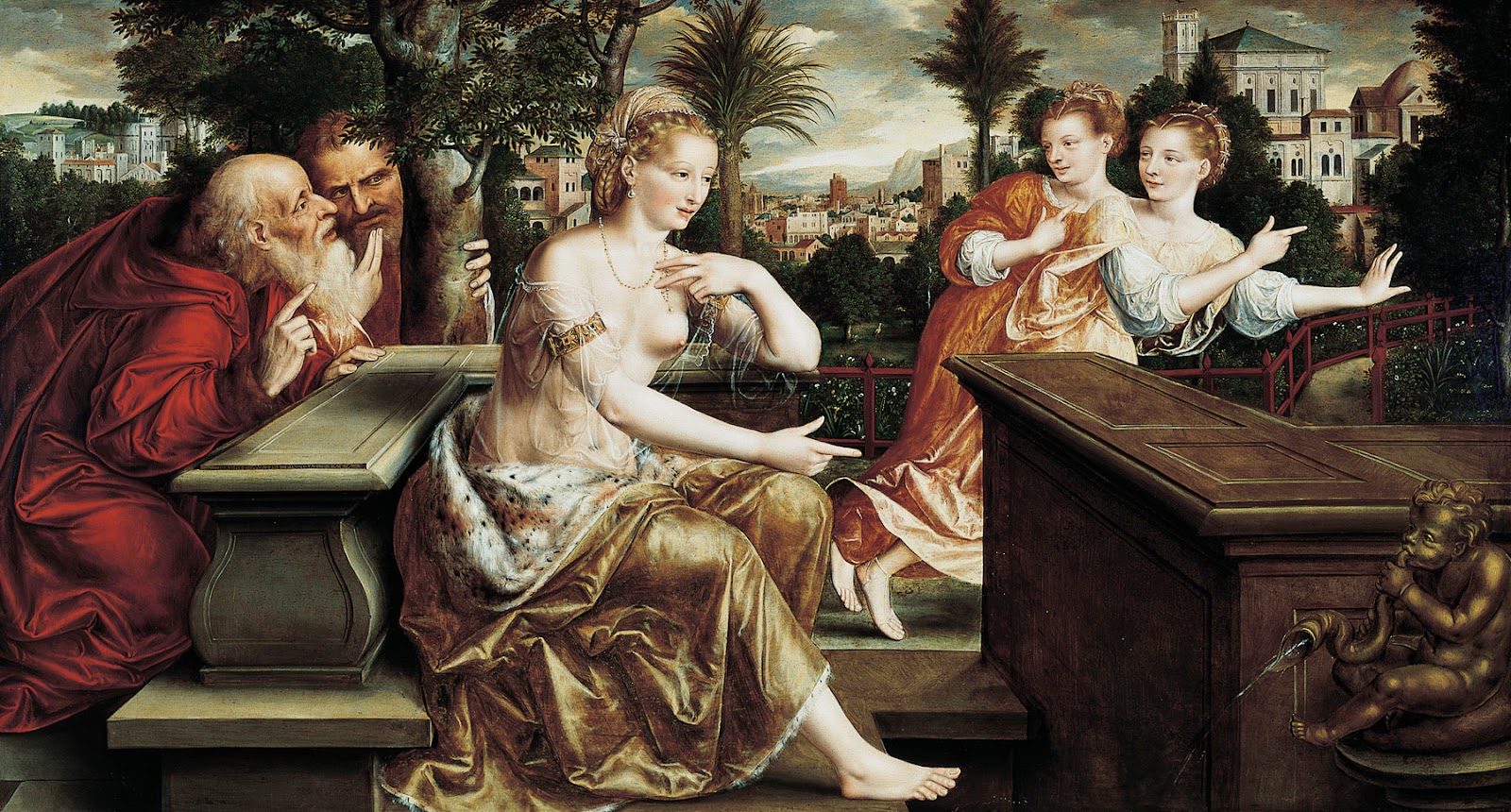 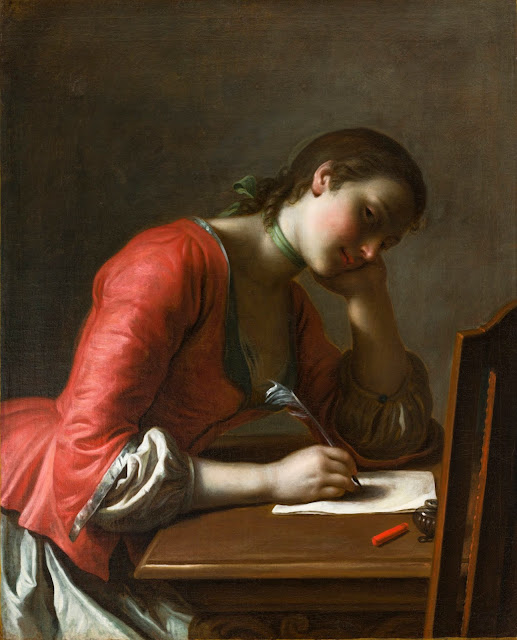 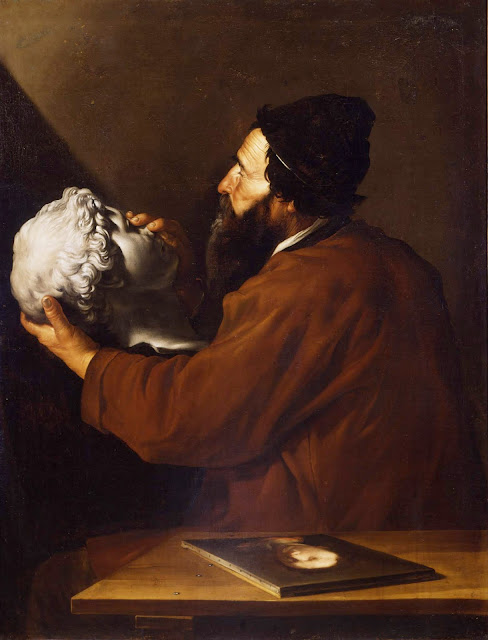 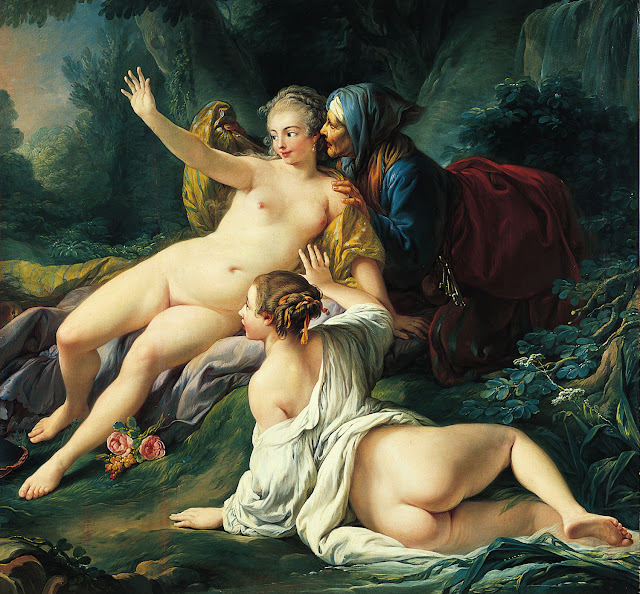 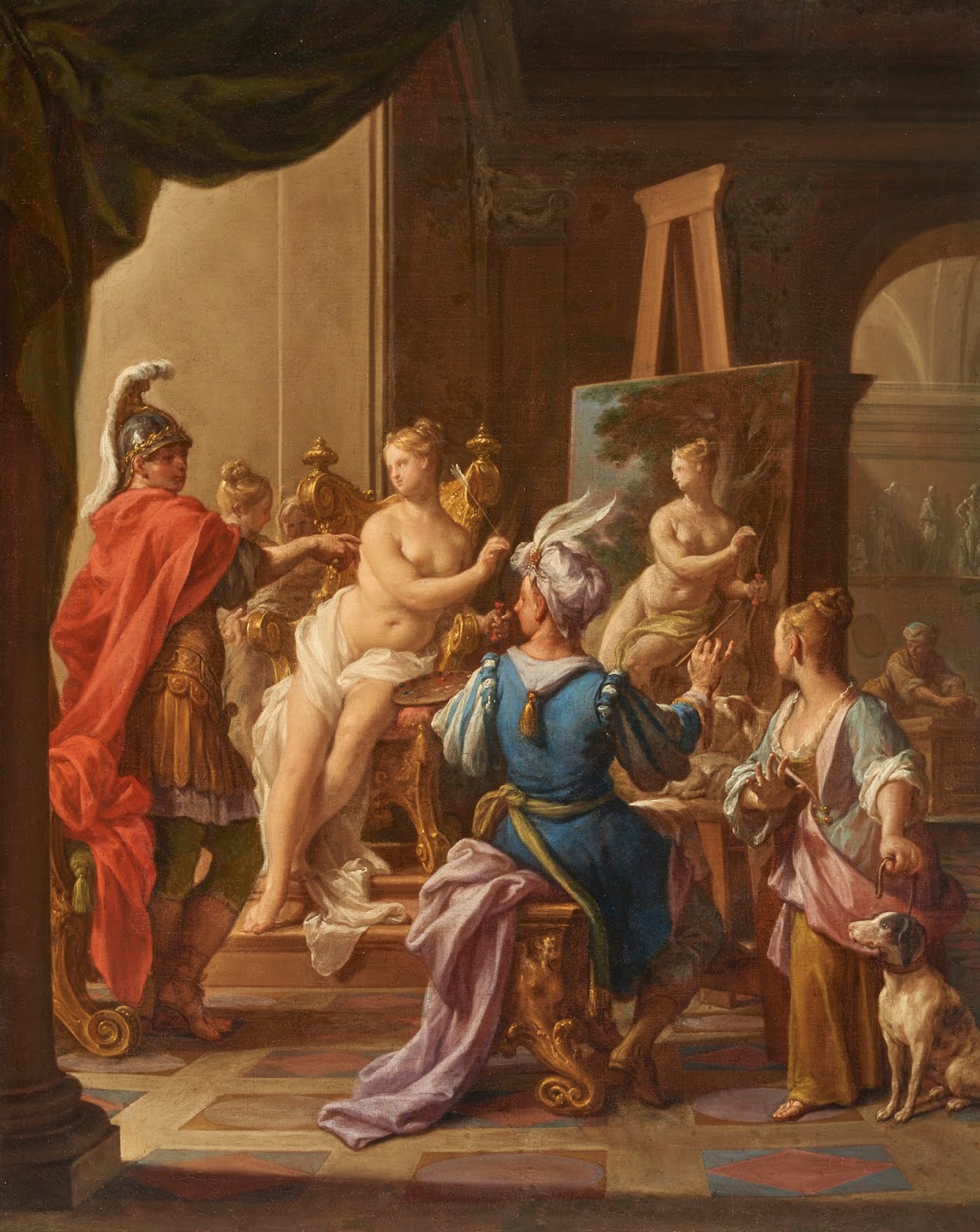 Posted by Jonathan Kantrowitz at 2:48 PM