Andrew Wyeth: Looking Out, Looking In Andrew Wyeth's fascination with windows is explored for the first time in an exhibition on view at the National Gallery of Art, its sole venue, from May 4 through November 30, 2014. Andrew Wyeth: Looking Out, Looking In will present some 60 tempera paintings, watercolors, and drawings that stand out from among 300 or more works of art by Wyeth depicting windows in figureless compositions. Inspired by the gift of Wyeth's first and one of his most important paintings on the theme—Wind from the Sea (1947), donated to the Gallery in 2009— the exhibition will include several works from private collections that have never been on public view.

"In these spare, elegant, and abstract window paintings and works on paper, Wyeth tackled the complexities presented by the subject throughout his career. We hope that this exploration both on the walls and in the catalogue will encourage a much closer look at Wyeth's work and contribute to the reassessment of his achievement that is well underway," said Earl A. Powell III, director, National Gallery of Art, Washington.

Deceptively realistic, Wyeth's window paintings and works on paper are skillfully manipulated constructions. The exhibition will be organized into thematic sections that group related preliminary drawings and watercolors with final tempera paintings, offering the clearest understanding of Wyeth's creative process.

Over the course of many decades, Wyeth studied neighboring buildings and his own studios in both Chadds Ford, PA, and in Cushing, ME, as subjects for his investigation of windows. He explored windows utilizing multiple visual devices, such as vantage points (far, near, inside, outside, ground level, upstairs), curtains (still and flowing), reflections, landscapes seen through windows, and even windows seen through windows.

Wyeth was working in the Olson House in Maine that appears in his renowned painting,

when an ocean breeze lifted curtains near an open window. He made a quick sketch and within a few weeks Wind from the Sea was complete. Wyeth described the moment: "That summer in 1947 I was in one of the attic rooms feeling the dryness of everything and it was so hot I pried open a window. A west wind filled the dusty, frayed lace curtains and the delicate crocheted birds began to flutter and fly. . . . My whole idea is to keep myself open for the elusive something [that might catch me] off balance when [I] least expect it. I drew a very quick sketch and had to wait for weeks for another west wind for more studies."

In addition to never-before-seen works, the exhibition will include several familiar ones that address the subject of windows.

linked to the tragic death of his father, N. C. Wyeth,

to the austere and mathematically precise 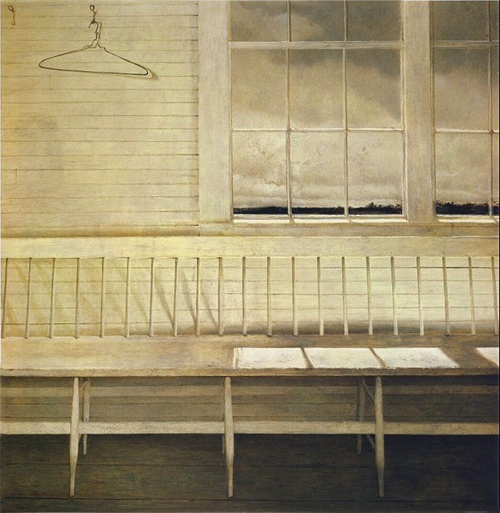 and the very spare

these paintings and works on paper represent a significant but little explored component of Wyeth's achievement.

Born in Chadds Ford, PA, Andrew Wyeth was 15 when he began training as an artist in the studio of his famous father, N.C. Wyeth. Five years later, his first one-man exhibition at Macbeth Gallery in New York sold out in two days. During a career that spanned more than seven decades, Wyeth produced a large and compelling body of work that included one of the most famous paintings in 20th-century American art—Christina's World  (Museum of Modern Art, New York).

Awarded the National Medal of Arts in 2007 and the Congressional Gold Medal in 1988, Wyeth was the first artist to receive the Presidential Medal of Freedom in 1963. His work is in the collections of most major American art museums, as well as museums throughout Europe, Russia, and Japan.

The Gallery's collection includes 19 paintings and works on paper by Andrew Wyeth.

Copublished by the National Gallery of Art and D.A.P., the richly illustrated exhibition catalogue includes essays by Anderson and Brock and addresses the creation and history of Wind from the Sea, links to Robert Frost and first-generation American modernists Charles Sheeler and Edward Hopper, and the abstract qualities of Wyeth's window paintings.

Also copublished by the National Gallery of Art and D.A.P., Andrew Wyeth: A Spoken Self-Portrait includes five monologues composed by Richard Meryman—a journalist and lifelong friend of the artist—from taped interviews with Wyeth, his friends, family, neighbors, and critics. It is a sampling of the hundreds of hours of recorded conversations with Wyeth that will eventually be made available to the public. The book includes reproductions of the works of art discussed by the artist, as well as previously unpublished photographs of Wyeth’s studio taken in 2009.
Posted by Jonathan Kantrowitz at 11:17 AM