WORKS FROM THE NATIONAL GALLERIES OF SCOTLAND


In November, The Frick Collection will be first venue to present a touring group of masterpieces from the National Galleries of Scotland. The ten paintings to be featured in New York―among them a Botticelli never before on public view in the United States and John Singer Sargent’s iconic portrait of Lady Agnew―will travel on in 2015 with forty-five additional works to the de Young, Fine Arts Museums of San Francisco and the Kimbell Art Museum in Fort Worth, Texas. The tour brings to all three cities ten of the greatest paintings from the Scottish National Gallery, works that were chosen specifically to complement the permanent collections of the three American venues. The exhibitions in San Francisco and Fort Worth also draw upon the collections of the Scottish National Portrait Gallery and Scottish National Gallery of Modern Art, the three institutions that comprise the Edinburgh sites of the National Galleries of Scotland.

Thomas Gainsborough’s Landscape with a View of a Distant Village (late 1740s or early 1750s); The Frick exhibition, titled Masterpieces from the Scottish National Gallery  is coordinated by Senior Curator Susan Grace Galassi and will be accompanied by a series of public programs and events. A fully illustrated catalogue will include entries on each of the paintings written by the curators of the Scottish National Gallery, as well as an introductory essay by Director Michael Clarke that provides an overview of the exhibition and the institution. Support for the presentation in New York is generously provided by The Peter Jay Sharp Foundation, The Christian Humann Foundation, and †Walter and Vera Eberstadt.

ABOUT THE SCOTTISH NATIONAL GALLERY

Founded in 1850, the Scottish National Gallery is widely regarded as one of the finest museums in the world, distinguished both for the quality and for the significance of its holdings. Its collection ranges from the fourteenth to early twentieth century and includes paintings, prints, drawings, and sculpture. The institution’s holdings encompass works by the greatest names in Western art, including Botticelli, Titian, El Greco, Velázquez, Rembrandt, Rubens, Watteau, Tiepolo and many of the Impressionists and Post-Impressionists. The Gallery also contains the most comprehensive collection of Scottish art from the seventeenth to the nineteenth century, with masterpieces by such well-known figures as Ramsay, Raeburn, and Wilkie.

The Frick Collection is pleased to present, for the first time in its galleries, a painting by Florentine master Sandro Botticelli—the serenely beautiful

Botticelli, best known for his famed (both in the Uffizi Gallery, Florence),

most likely completed this intimate, contemplative image of the Virgin and Child for display in a domestic setting, perhaps a private chapel or study. Though the composition is based on a type developed by Botticelli’s teacher, Filippo Lippi, it is unusual in that it depicts the Christ child sleeping, his closed eyes and supine body possibly intended to foreshadow his eventual death. The picture is rare among Botticelli’s works in that it is painted on canvas, a support which had only recently come into use in Italy. The painting has been in Scotland for more than a hundred and fifty years, taken there by Lord Elcho in the nineteenth century and remaining in his ancestral home until 1999, when it was sold by his descendants to the Scottish National Gallery. The exhibition of Botticelli’s masterpiece at the Frick, de Young, and Kimbell, marks the first time that this work has ever been on public view in the United States.

is one of a small group of bodegones (kitchen scenes) painted by the artist in his native Seville before he moved to the court of Philip IV in Madrid in 1623. Velázquez’s confident handling of the subject is remarkable when one considers he was only eighteen or nineteen years old at the time the canvas was executed. The virtuosity with which he represents a range of textures―glistening silverware, semi-translucent egg whites, rustic earthenware―is matched by his sensitivity to expression, as displayed in the quizzical face of the boy and the stern, wizened features of the old woman. Visitors will have the opportunity to compare this early genre scene with one of Velázquez’s later, official court portraits—the Frick’s own

on display in the West Gallery. In this royal portrait, the artist maintains the mastery of light and shadow evident in his earlier work while achieving the spontaneous, open brushwork associated with his maturity.

All three American institutions on this tour are celebrated for the richness of their French eighteenth-century holdings. The Frick is well known, for example, for its Fragonard and Boucher rooms as well as Jean-Antoine Watteau’s early military scene 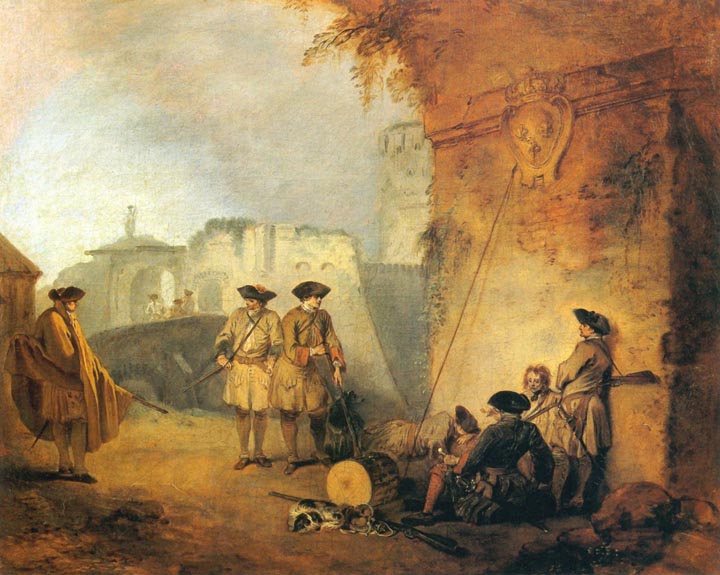 The exhibition brings to New York a later example from Watteau’s oeuvre of fête galante paintings,

last seen in the United States a decade ago.

In his mature paintings, Watteau often returns to the theme of the Garden of Love, and Fêtes Vénitiennes is typical of these scenes; fancifully dressed figures flirt, chat, and dance in a frothy landscape, all beneath the watchful eye of a seemingly animated garden sculpture. The painting’s composition suggests the shallow stage of a theatre, and, indeed, the scene may be inspired by the early eighteenth-century ballet-opera Les Festes Vénitiennes. The work is unusual among Watteau’s images of pleasure-seekers in that several of the figures may actually be intended as portraits. The male dancer in exotic garb at left represents the Flemish painter Nicolas Vleughels (with whom Watteau lodged at this time), and the somewhat somber musician at right is said to depict Watteau himself.

The renowned Scottish master Allan Ramsay is included in the exhibition with a tender portrait of his second wife,

This sensitive study may have been painted to mark the birth of the couple’s second daughter, Charlotte, in 1758. The painting hung in the artist’s London home, and Ramsay’s treatment of the subject evokes the quotidian pleasures of domestic life―through Margaret Ramsay’s informal pose, the delicately rendered still life of roses, and the warm-hued light that falls on his wife’s face and lace mantle. Six years before the portrait was painted, the couple had eloped in Edinburgh without the consent of the bride’s parents, who disapproved of Ramsay’s lower social station. Nothing about Ramsay’s portrait suggests discord, however; rather, the work appears suffused with an affectionate bond between sitter and artist.

providing a fitting note with which to celebrate this Scottish-American collaboration. Andrew Noel Agnew, a barrister who had inherited the baronetcy and estates of Lochnaw in Galloway, commissioned this painting of his young wife, Gertrude Vernon (1865‒1932), in 1892. It was exhibited at London’s Royal Academy in 1898 and made Sargent’s name as one of the most fashionable portrait painters of Edwardian society, while also establishing Lady Agnew’s reputation as a society beauty. With the bravura brushwork characteristic of his art, Sargent captures Lady Agnew’s penetrating gaze and the delicate play of light and shadow across her shimmering ensemble of white and lilac. Though Henry Clay Frick acquired numerous works by another American expatriate and society portraitist—James McNeill Whistler—he never added a portrait by Sargent to his collection.

Two works by Whistler on display in the permanent galleries―

―will provide fascinating counterpoints to Sargent’s masterpiece, which was last exhibited in the United States more than fifteen years ago.

TITLE: Botticelli to Braque: Masterpieces from the National Galleries of Scotland

TITLE: Botticelli to Braque: Masterpieces from the National Galleries of Scotland

Posted by Jonathan Kantrowitz at 7:48 AM