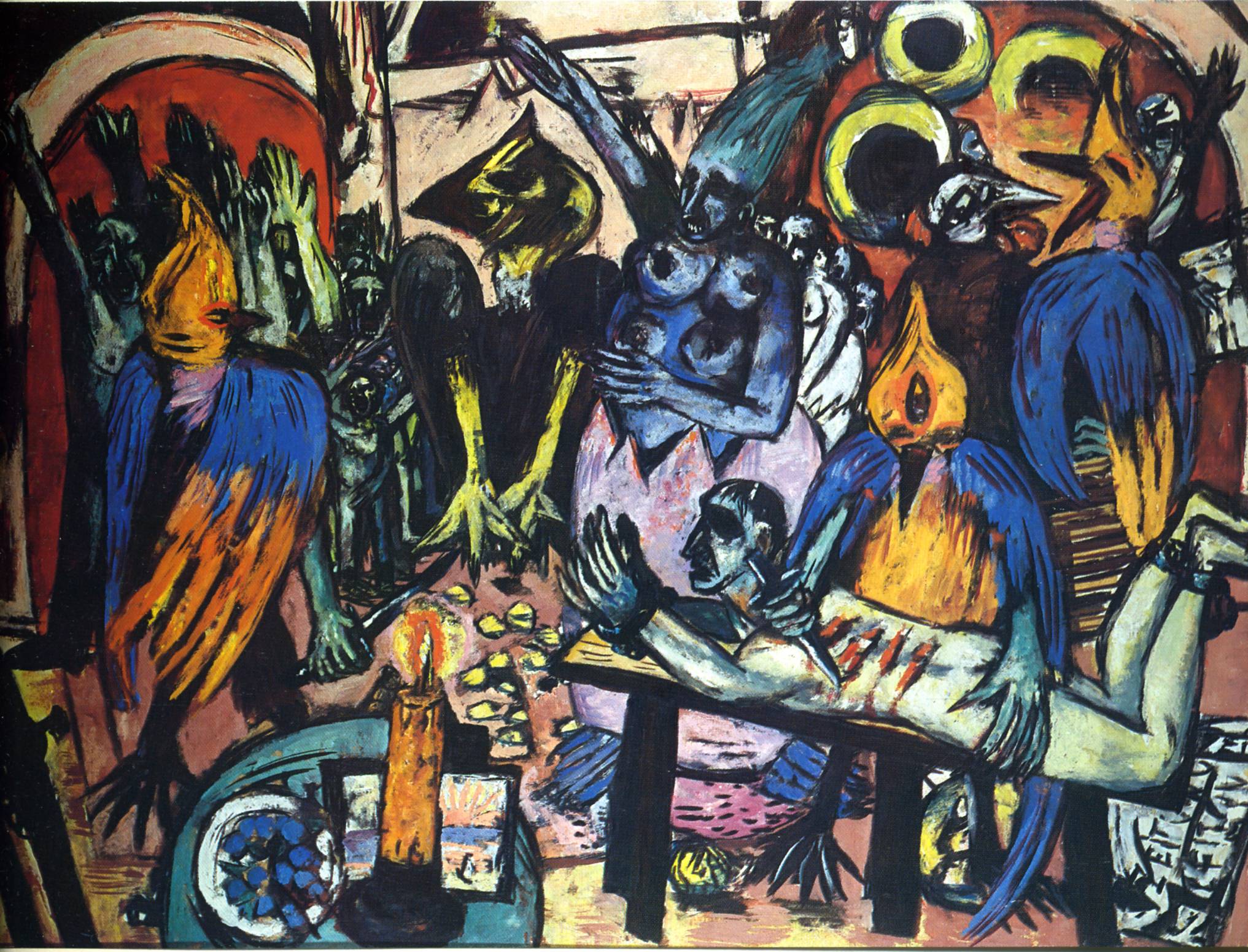 Max Beckmann’s Bird’s Hell (1938, estimate on request) will lead 20th Century at Christie’s, a series of sales that take place from 17 to 30 June 2017, in the Impressionist & Modern Art Evening Sale on 27 June 2017, when it will be offered at auction for the first time. One of the most powerful paintings that Beckmann created while in exile in Amsterdam it presents a searing and unforgettable vision of hell and is poised to set a world record price for the artist at auction. Begun in Amsterdam and completed in Paris at the end of 1938, this work ranks amongst the clearest and most important anti-Nazi statements that the artist ever made, mirroring the escalating violence, oppression and terror of the National Socialist regime. The painting will be on view in New York until 17 of May, Hong Kong from 25 to 29 May and London from 17 to 27 June 2017.

Painted with vigorous, almost gestural brushstrokes and bold, garish colours, Bird’s Hell envelops the viewer in a sinister underworld in which monstrous bird-like creatures are engaged in an evil ritual of torture. Presiding over the scene is a multi-breasted bird who emerges from a pink egg in the centre of the composition. To her right, a crouching black and yellow bird looms over golden coins spread before him, while behind the central figure, a group of naked women stand huddled together. Heightening the sense of hysteria is the group of figures standing within a glowing, blood red doorway to the left of the composition. Guarded by another knife-wielding bird, they return the bird-woman’s gesture, their right arms raised in unison in the same furious salute. At the front of the scene, a naked man – the symbol of innocence within this reign of terror – is shackled to a table, held down by another bird that is slashing his back in careful, horizontal lines.

Continuing the Germanic tradition of the depiction of hell, this painting echoes the gruesome allegorical scenes of

Hieronymus Bosch’s famed The Garden of Earthly Delights, while at the same time, takes aspects of Classicism and mythology to turn reality into a timeless evocation of human suffering. In this way, Bird’s Hell, like

of the same period, transcends the time and the political situation in which it was made to become a universal and singular symbol of humanity.

Adrien Meyer, International Director of Impressionist & Modern Art, Christie’s New York: "Bird’s Hell was painted in 1938 in Amsterdam as a direct attack on the cruelty of the Nazi regime. A year earlier, Hitler's government had confiscated over 500 of his works from German museums, and included some of these in the notorious Degenerate Art exhibition. This emblematic picture has since been unanimously recognized as the Guernica of Expressionism. The grasping composition echoes the fantastical world of 16th century master Hieronymus Bosch. The current owner first attempted to buy this masterpiece in 1956 and succeeded thirty years later, lending it since to the most prestigious exhibitions around the world. Its upcoming sale represents a unique opportunity to acquire not only a Beckmann monument but also a true piece of history."

Jay Vincze, Head of Impressionist & Modern Art, Christie’s, London: “We are honoured to present such a seminal work by Max Beckmann at auction for the first time. Bird’s Hell stands alongside Picasso’s Guernica as one of the most politically charged paintings of its time and it is a rare opportunity to offer a work of such historical significance by Beckmann. For the artist there were two worlds, one of spiritual life and the other of political life. In this painting he is asking the viewer to decide which is more important. It is a terrifying, yet timeless history painting and a masterpiece of the artist’s oeuvre.”

Egon Schiele Einzelne Häuser (Häuser mit Bergen) (1915, estimate: £20,000,000-30,000,000) was painted in the middle of the First World War and exemplifies the artist’s visionary understanding of landscape, which he used as an allegory of human emotion.

Schiele created landscapes filled with melancholy, charging the natural world with a deeper spiritual meaning. The autumnal setting of Einzelne Häuser (Häuser mit Bergen) can be seen as a metaphor for mortality; the crumbling facades of the townscape and surrounding trees used as an alternate physical expression of the elemental forces of growth, death and decay. As with almost all of Schiele’s townscapes, the buildings in Einzelne Häuser (Häuser mit Bergen) appear to represent his mother’s hometown, Krumau, a medieval Bohemian town on the Moldau River, known today as Český Krumlov on the Vltava in the Czech Republic. Schiele painted Einzelne Häuser (Häuser mit Bergen) on the reverse of a fragment of an older picture known as Monk I that dates from 1913. It is believed to have formed part of one of his largest attempted projects, Bekehrung (‘Conversion’), and is linked to the two monumental allegories that he produced the same year, of which only fragments, sketches and photographic evidence are now known.

VINCENT VAN GOGH: Painted in September of 1889 Le Moissonneur (d’après Millet) is one of ten paintings that Van Gogh made after a series of drawings by Jean-François Millet entitled Les Travaux des Champs (1852), seven of which now reside in the Van Gogh Museum, Amsterdam, with the other two in private hands. The work of Millet became a major focus for Van Gogh during this period, following the gift of a set of engravings of Millet’s Les Travaux des Champs by Jacques-Adrien Lavielle that was sent to Van Gogh from his brother Theo van Gogh the same year. Le Moissonneur (d’après Millet), employs the composition of Millet but is filled with Van Gogh’s own dramatic and intense use of colour. With his back to the viewer, bent over as he works the fields, the male figure is illuminated against the deep blue sky and golden yellow fields.
Posted by Jonathan Kantrowitz at 7:06 AM