At the University of Georgia, the Terry name is synonymous with UGA’s business school, but the influence of C. Herman and Mary Virginia Terry extends far beyond that, including to the Georgia Museum of Art. Also on the campus of the university, the museum is the recipient of 14 paintings and works on paper from the Terrys’ collection that will be on view May 12 through August 5 in the exhibition “A Legacy of Giving: C. Herman and Mary Virginia Terry.”

It would be rare and marvelous to receive a gift of a single work by Childe Hassam, John Henry Twachtman, Maurice Prendergast, Andrew Wyeth, Ernest Lawson, Winslow Homer, Gifford Beal or John Singer Sargent. To receive works by all of these artists at once, in a single gift, is extraordinary. Until Mrs. Terry made her gift, the museum did not own a painting by Sargent, only a drawing. These works also fill some gaps in the museum’s collection, allowing UGA students and the wider Athens-area community to benefit from seeing them in person.

William U. Eiland, director of the museum, said, “My reaction at hearing from Mrs. Terry that she was making this gift to the museum? Joy. Unaffected, pure joy. And gratefulness, on behalf of generations of students yet to enroll at the university.”

Mary Virginia Terry has said, “My husband and I just felt we wanted to give back because we had such good fortune.” They chose to focus on the arts, hospitals, education and children’s concerns because, “We felt those were important both for the future and for the needs we saw now.” Mrs. Terry is a modest person, who does not love the spotlight, but she accepts public recognition in the hope that her giving will serve as an example to others. For more than half a century, she has provided support to the University of Georgia that has helped it strengthen academic and research programs. The museum is proud and grateful to be among the beneficiaries of their kindness. 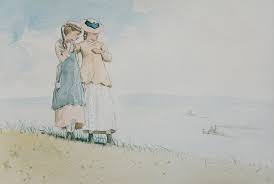