This joint presentation of their work not only aims to cast light on Monet’s formative years, in which Boudin played an important role, but also to offer a vision of their entire careers and the origins of the Impressionist movement.

Curated by Juan Ángel López-Manzanares, a curator at the Museo Thyssen, the exhibition brings together around 100 works by the two artists, including loans from museums and institutions such as the Musée d’Orsay, Paris, the National Gallery, London, the Metropolitan Museum of Art, New York, the Israel Museum, Jerusalem, the MuseuNacional deBelas Artes, Río de Janeiro, and the Marunuma Art Park in Japan, as well as from private collections such as the Pérez Simón collection.

The exhibition is structured chronologically and thematically and is divided into eight sections. Monet / Boudinemphasises the two painters’ shared artistic concerns such as their interest in the iconography of modern life as reflected in scenes of summerholiday visitors on the beach at Trouville; changing effects of light, to be seen in most of their oils and pastels; and the largely untamed nature of the Brittany and Normandy coastlines.1. Picturesque landscape

The two artists met for the first time inthe spring of 1856 when they met in the Gravier stationery shop in Le Havre. Boudin, who was the older by 16 years, congratulated Monet on his work as a caricaturist, a field in which he was beginning to gain recognition, and encouraged him to continue studying and painting, inviting him to join him in this activity. At this date Boudin was embarking on his early mature work following a self-taught learning period based on copying the 17th-century Dutch masters. During this period he was producing plein air studies in the tradition of the Barbizon School landscape painting.

Not long after the young Monet accepted Boudin’s offer and started to draw and paint outdoors in the older artist’s company, becoming his student. Although his parents were not happy with this relationship, given that Boudin came from a modest family, Monet learned to depict light accurately, observing and composing landscapes from drawings and oil studies. After two years he possessed enough skill to produce his first canvas intended for public exhibition: View near Rouelles(1858), which depicts the landscape around Le Havre, as does Boudin’s Normandy Landscape(ca.1857-58). Both landscapes are balanced and relatively conventional in the arrangement of the motifs but they effectively capture bright daylight, one of Boudin’s ongoing artistic concerns which he passed on to his pupil Monet.

Over the following years Monet followed Boudin in the study of painters who reached their maturity in the 1830s such as Rousseau and Daubigny. His departure for Paris in 1859 could have removed him from the influence of Boudin but his frequent visits to Le Havre, their correspondence and the two painters’ artistic output demonstrates the close links which they maintained. As a result, the initial relationship between mentor and pupil changed to one of mutual admiration and inspiration.

Previously considered a minor genre, from the second quarter of the 19th century marine

views became increasingly important and more sought-after by collectors. Boudin’s father was a harbour pilot and his childhood had close connections to the sea. His earliest drawings of boats date from the 1840s but it was from 1854 onwards that he depicted scenes of fishermen with particular frequency.

For both artists their evolution as marine painters was marked by their meeting in 1862 with the Dutch painter Johan Barthold Jongkind, considered one of the forerunners of Impressionism along with Boudin.

In addition to following Jongkind’s example Monet also looked at Courbet and Manet’s marine views and began to produce large-scale compositions painted outdoors. One example is


The Beach at Sainte-Adresse(1867), one of the most important works from his early phase. In this canvas Monet employed cool, glittering tones which anticipate Impressionism and distance him from the grey tonalities of Boudin’s works. Furthermore, while Boudin tended to separate local Normandy people from Parisians, Monet mixed them together as a single social reality

Formerly a small fishing village with a long beach, Trouville rapidly became a tourist destination for the middle classes and the aristocracy. Boudin discovered it in the early 1860s and returned every summer to paint the port, quaysides, the River Touques and beach scenes. With the latter he aimed to appeal to a wider clientele, including the summer visitors to the town. However, the fact that Boudin emphasised effects of light and weather over picturesque details meant that these works did not achieve the desired result. One example is 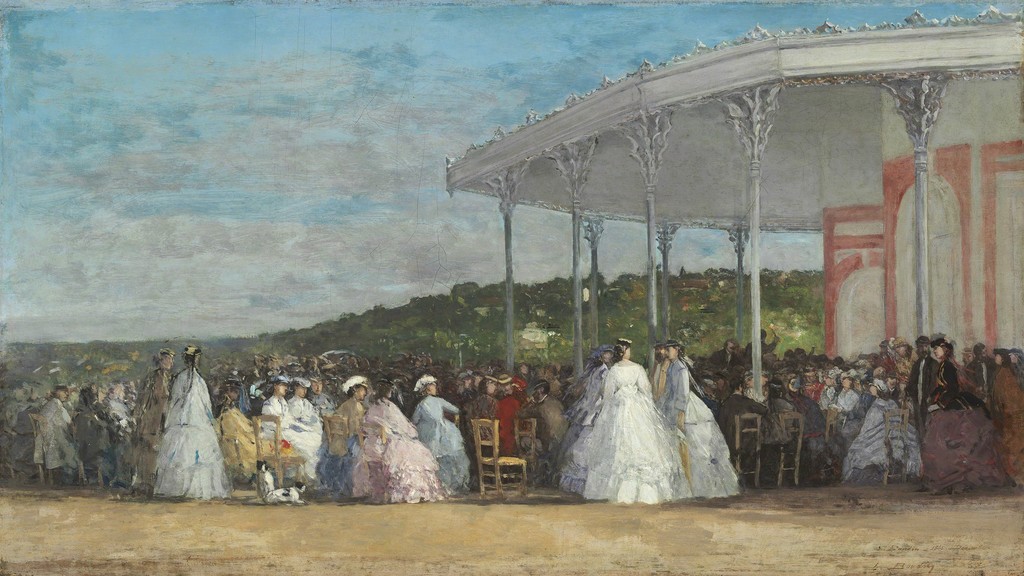 Concert at the Casino of Deauville, which he exhibited without success at the Paris Salon of 1865.

Over the years he opted for smaller, more vibrant compositions aimed at a more limited group of collectors and in 1870 he largely abandoned his beach scenes in order to focus more intensively on marine views, which were more in demand.

Monet and his family also moved to Trouville for the summer of 1870 where he tried out various beach scenes based on those of his master. However, in works such as 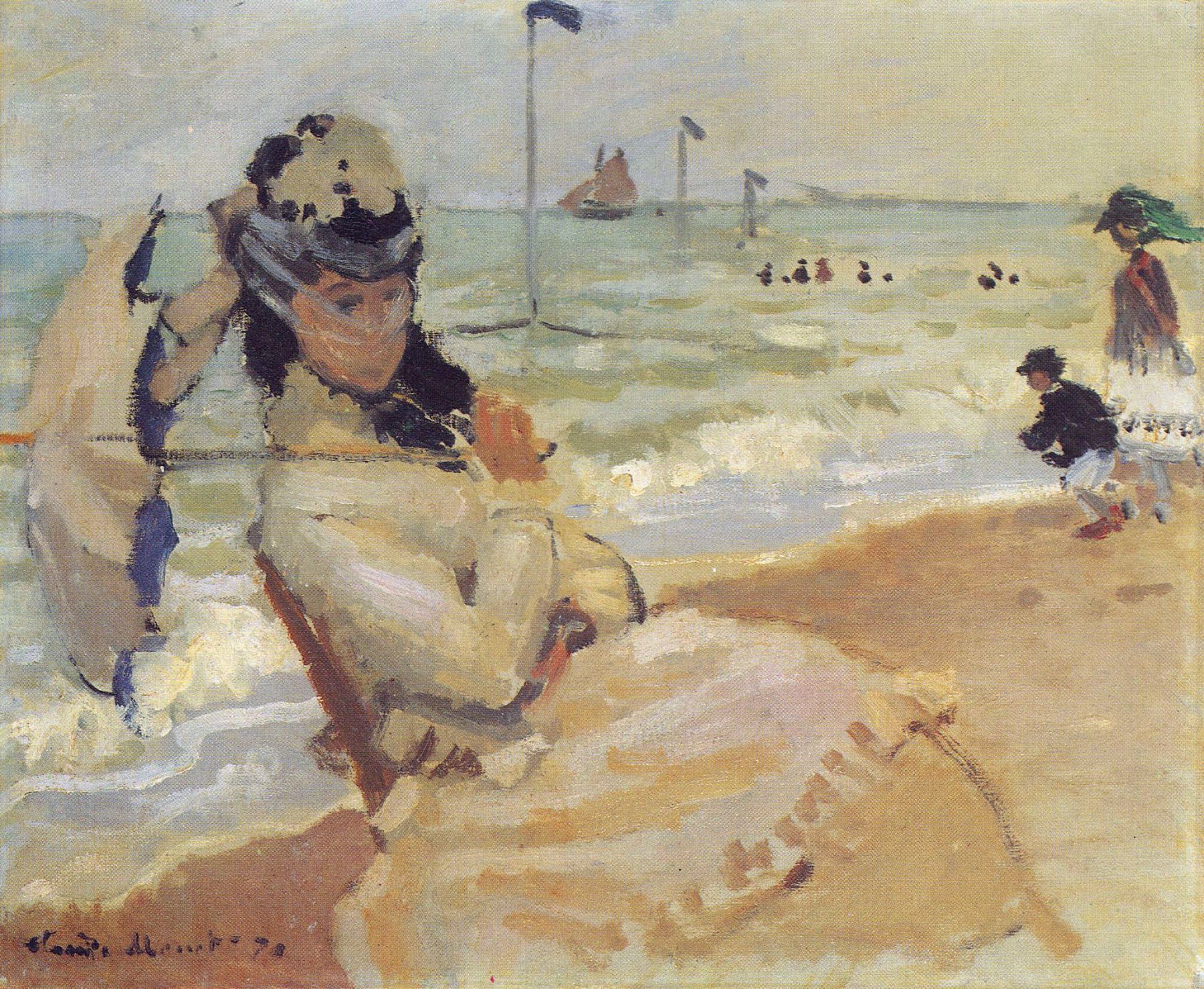 Camille on the Beach at Trouville(1870) and

Boudin’s anonymous figures, always seen from a distance as elements in the landscape, become specific individuals, including his wife Camille and Boudin’s wife Marie-Anne Guédès.

Around the late 1850s Boudin started to produce pastel sky studies in which he made use of the material’s flexibility to rapidly capture the appearance of the sky at different times of the day and in different seasons and weather conditions. Among the new generation of artists it was Monet who derived the most direct lesson from these studies, producing more than 100 pastels during his career. The earliest make use of outlines to define the motifs but he soon moved towards simpler compositions based on two or three strips of colour dotted with small, secondary elements.

As he mastered the technique, pastel became an autonomous medium which allowed him to try out compositions and effects that required very rapid work in order to capture variations of light and colour.

In recognition of his role in the emergence of Impressionism Monet invited his master to take part in the First Impressionist Exhibition of 1874.

Boudin exhibited three canvases, four watercolours and six pastels. In addition to five canvases Monet also showed seven pastels, which can be seen as a homage to his mentor. Baptised “the king of the skies” by Corot, Boudin continued to paint works of this type throughout his life, using brighter and more luminous colours in his late period and in the wake of Impressionism.

In the 1890s Monet’s work underwent a fundamental shift when he started to produce series on a single motif, using a similar viewpoint but painted in different weather conditions and under different types of light. The origins of this concept are largely to be found in the atmospheric variations present in the studies by Boudin, whose interest in changing effects of light on the landscape at different times of day already appears in his sketchbooks of the 1850s and in his pastel sky studies.

In 1878 Monet started to paint various groups of canvases in Vétheuil, including 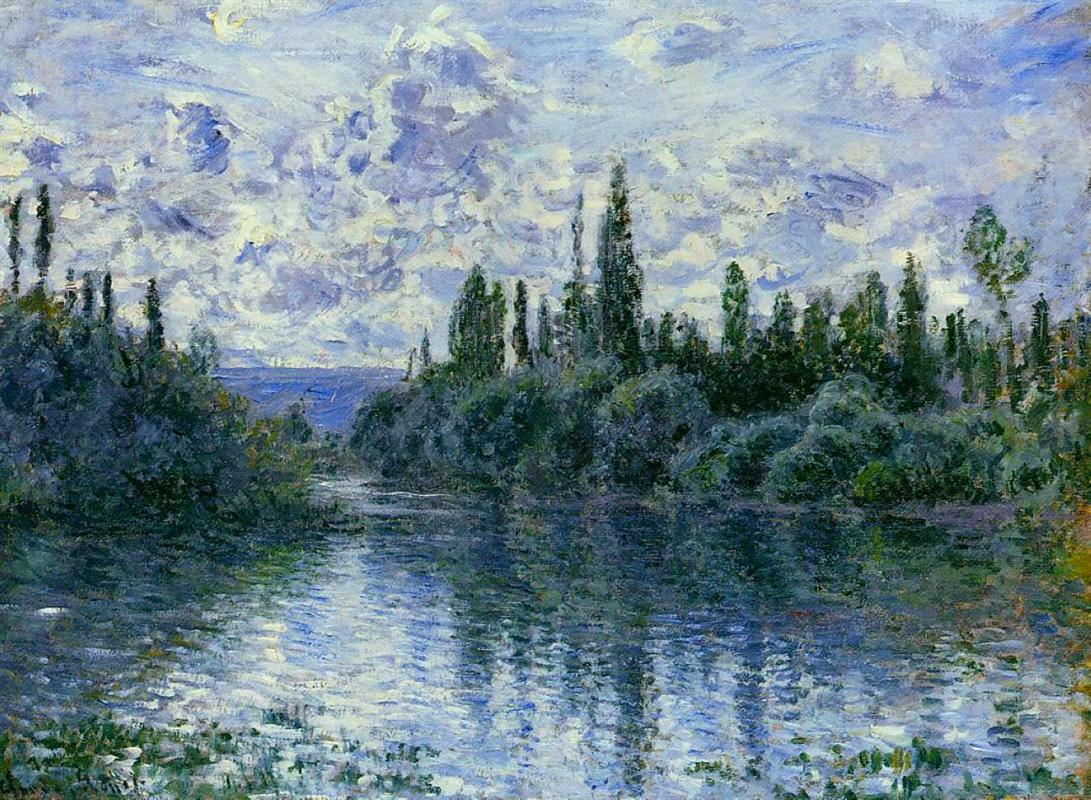 
and The Flood(1881) although the group of works that comes closest to his later series is the 16 oils on the Seine thawing in 1880.

Two years later in Pourville Monet employed the term “series” for the first time in a letter to the art dealer Durand-Ruel. In his subsequent painting campaigns he gradually restricted the viewpoints while increasing the number of canvases on Eugène Boudin motif, firstly devoting half-an-hour a day to each one then reducing this to just 7 minutes a session in order to capture an “effect.”

For his part Boudin executed around 200 variations on the quaysides at Trouville, capturing small differences in the atmospheric conditions. In contrast to Monet his work was intuitive and unsystematic, as well as responding more directly to collectors’ interests. Included in this section are various views of the church at Abbeville from the early 1890s and of the River Touques, all painted at different times of day.

In the late 1870s Monet and Boudin’s friendship started to cool. This may have been due to Monet’s relationship with Alice Hoschedé before the death of his wife Camille, whom Boudin greatly appreciated, or to the economic crisis of 1875 which seriously affected the art market. Boudin nonetheless maintained his admiration for his former pupil and numerous works from the 1880s and 1890s reveal their shared interests, for example their views of the Normandy cliffs and the Brittany coastline.

In Monet’s paintings of the 1880s human figures lose their importance in comparison to nature. Dating from this period are 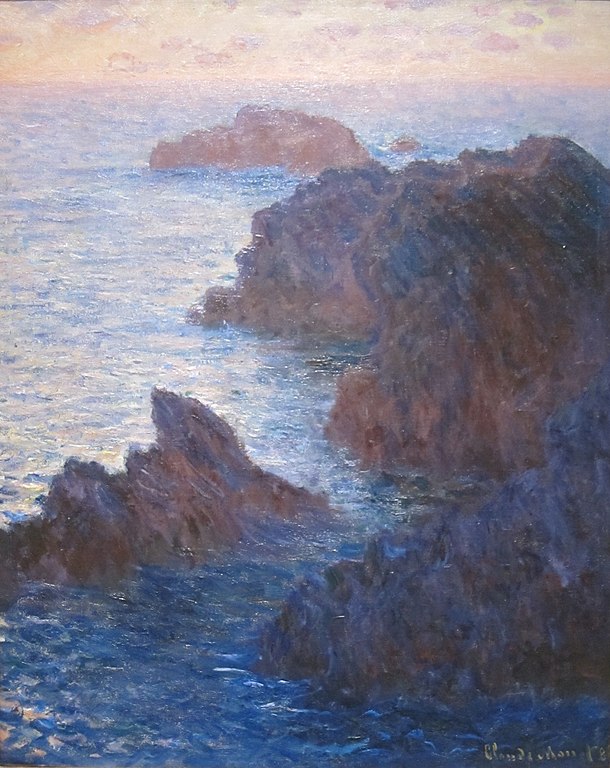 
Years later Boudin also painted at Étretat, executing sketches of boats on the beach and views of the cliffs. In 1897, the year before his death, he travelled around Brittany and painted a number of oils characterised by a mood of calm and balance in contrast to Monet’s more agitated views.

The exhibition of pastels, watercolours and 150 oils by Boudin held at Galerie Durand-Ruel in 1883 definitively established the artist’s reputation. Having achieved a degree of financial stability he moved on in his work from the conservative tastes of his clientele, now also painting for himself and taking the Impressionist innovations into account. Dating from these years are marine views in which evening light is the principal element, such as 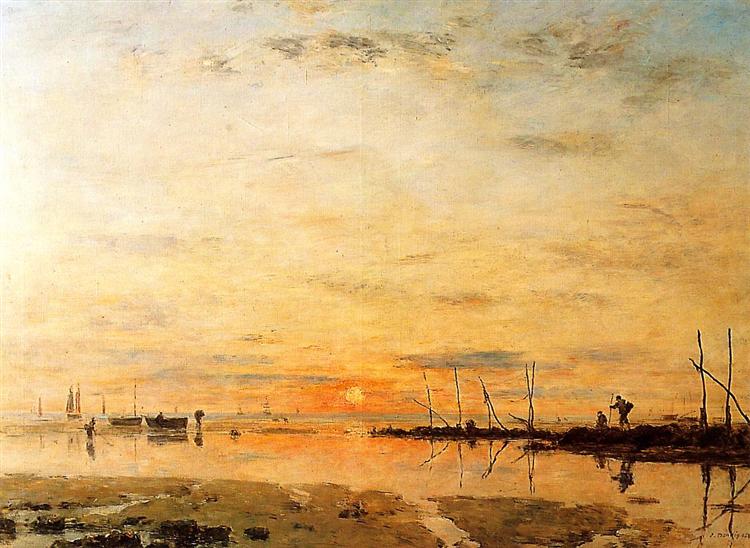 While in the 1880s Monet focused on both the power of the sea and on the study of light and atmospheric effects, in the following decade it was the latter that most attracted his attention together with an exploration of serial painting. The example of Corot, a key reference for both painters, became still more evident in Monet’s work of the 1890s, for example in 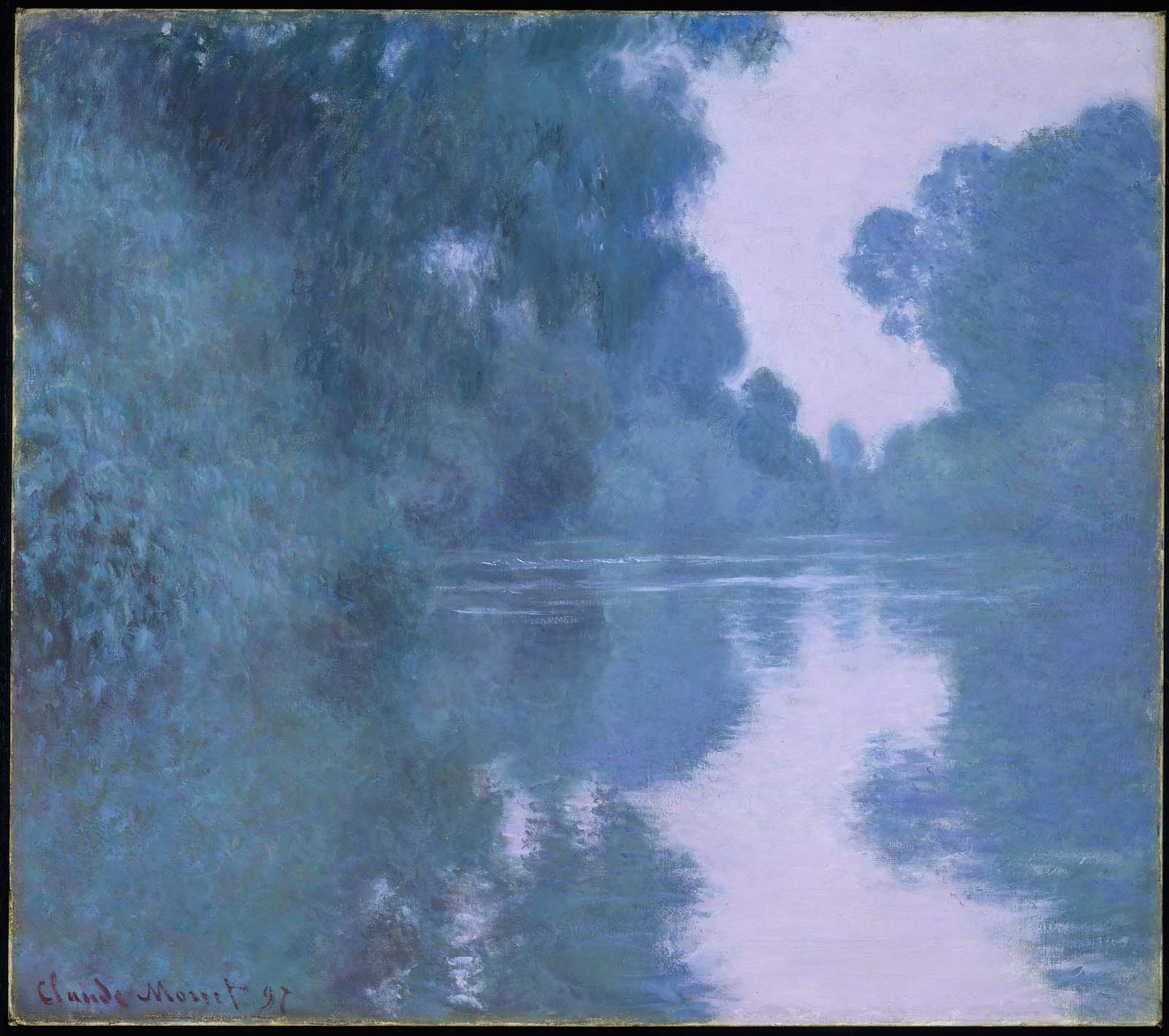 The latter is part of a series of 24 canvases started outdoors and completed in the studio, all depicting the same stretch of the river but at different times of day.

Travels to the South

For two painters such as Monet and Boudin, who grew up and became painters under the grey and changing skies of Normandy, their encounter with the light of the Mediterranean must have been a revelation. This was certainly true for Monet: following a short trip to the Côte d’Azur and the Italian Riviera in the company of Renoir, in 1884 he lived in Bordighera for several months in order to paint. In 1888 he returned to Antibes where he once again painted the pink light of the Mediterranean.For health reasons Boudin made his first trip to the Midi in 1885, which may have influenced the more colourful palette which he employed from that date onwards.

It was above all during his visit to Beaulieu in 1892 that he fully grasped Mediterranean light while completing his canvases outdoors thanks to the fine weather. Like Monet, in 1893 Boudin went to Antibes and in 1895 he painted more than 70 canvases in Venice, works that he himself considered his “swansong”.

After Boudin’s death in 1898 Monet was on the organising committee of the posthumous exhibition devoted to him. Years later when rereading his correspondence with his master, he acknowledged that Boudin had been one of the first to recognise his abilities and had professed a constant admiration for him. In 1920 Monet fully recognised the importance of Boudin when his told his biographer Gustave Geffroy: “I have said it and I say it again: I owe everything to Boudin.”

Catalogue with texts by Juan Ángel López-Manzanares, Laurent Manœuvre, Géraldine Lefebvre and a chronology by Elena Rodríguez; digital publication from the Thyssen Kiosk and a short, explanatory guide. 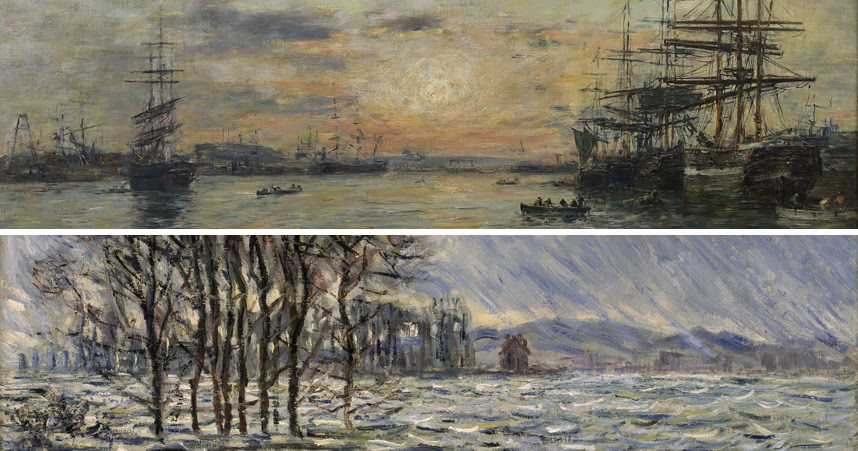 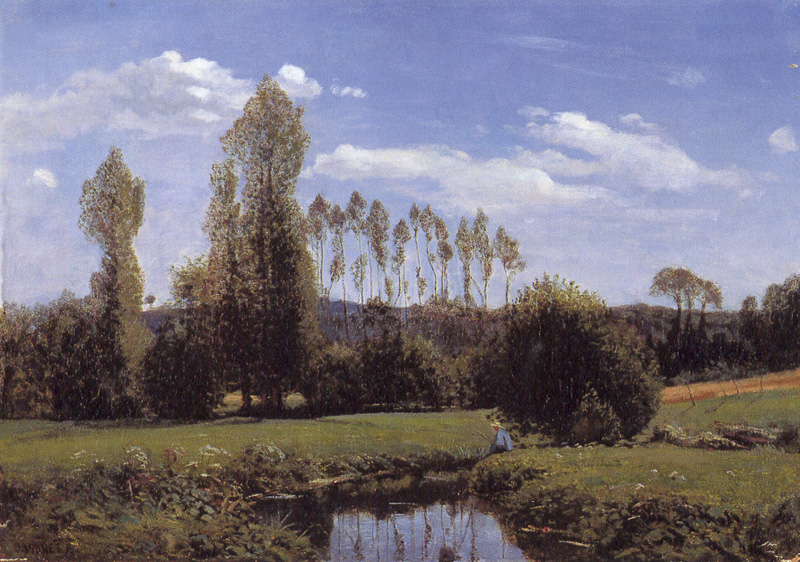 Posted by Jonathan Kantrowitz at 11:09 AM