The finest Blue Period work by Pablo Picasso to come to auction in a generation and a seminal Waterlilies by Claude Monet will be offered in Sotheby’s Evening Sale of Impressionist & Modern Art in New York on 5 November 2015. Both works are on offer from the remarkable collection of William I. Koch – American entrepreneur, collector and America’s Cup winner.

Picasso painted the stunning La Gommeusein 1901, emboldened by the success of his first exhibition in Paris but reeling from his friend Carlos Casagemas’s suicide. The work exemplifies the poignancy, introspection and sexual charge of this seminal moment in the history of Modernism (estimate upon request).

Monet’s exquisite Nymphéas, painted circa1908, hails from the celebrated series depicting his lily pond at Giverny (estimate $30/50 million). The series dominated the artist’s later years and is now seen as his crowning achievement.

The paintings will be on public view in Sotheby’s London galleries from 10–15 October during Frieze Week, before returning to New York for exhibition beginning 30 October.

Simon Shaw, Co-Head of Sotheby’s Worldwide Impressionist & Modern Art Department, said:“Above all others, Picasso’s Blue Period is prized as his breakthrough – this is the moment Picasso becomes Picasso. With her dreamy gaze and frank sensuality, the cabaret dancer in La Gommeuseushers in a new visual idiom for the 20thcentury. Exploring themes which would underpin Picasso’s work for the next seven decades, the painting stands squarely between the bohemian nightlife of Toulouse-Lautrec and the raw expressionism of Munch and Schiele.” 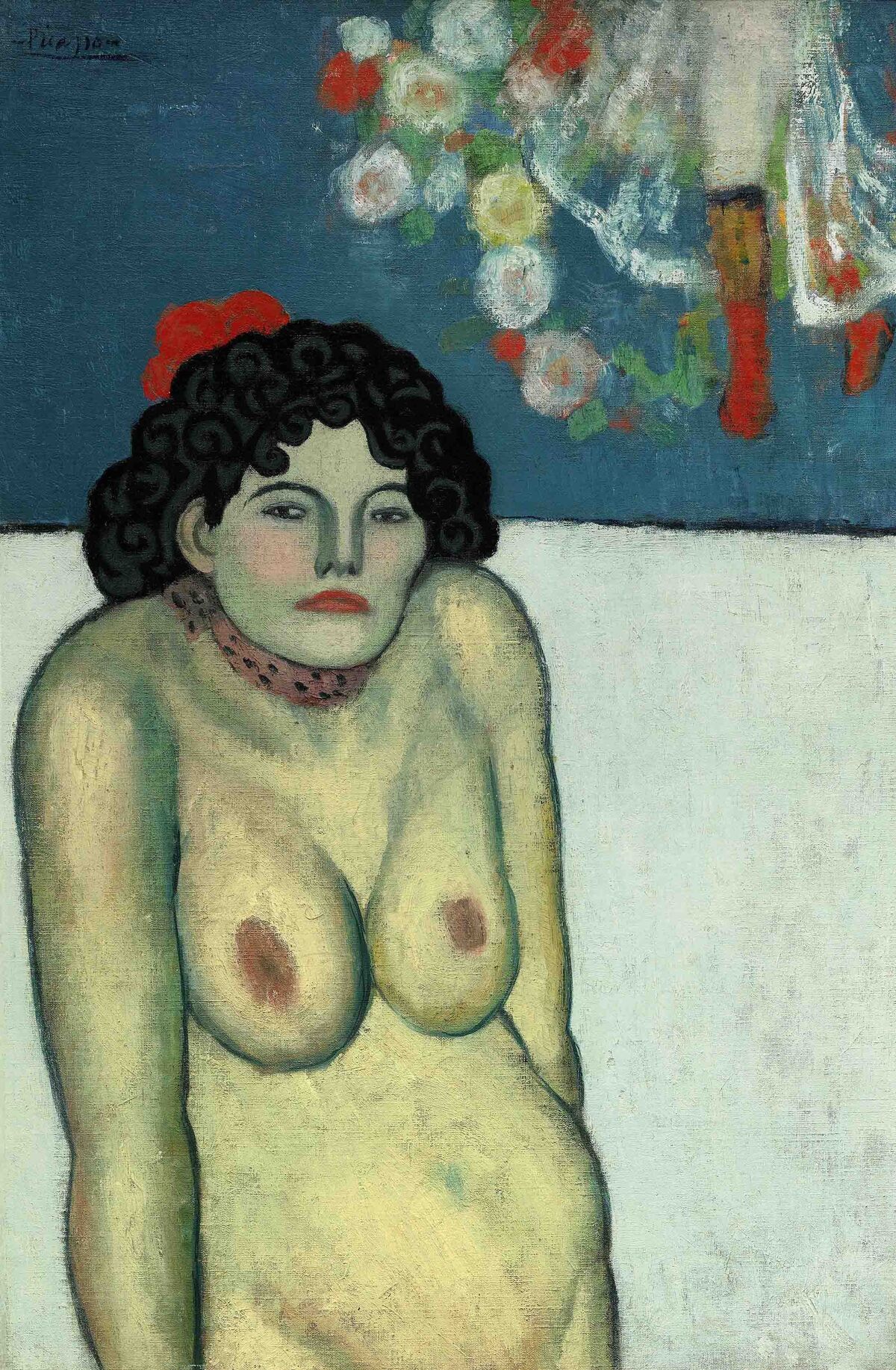 La Gommeuse is among the rare and coveted pictures created during Picasso’s storied Blue Period (1901–1904). The painting dates from the second half of 1901, following Picasso's widely-praised exhibition at Ambroise Vollard's gallery that June, and amidst the sobering aftermath of his friend 3Carlos Casagemas's suicide earlier inthe year. Just shy of 20, the artist was sharing an apartment in Paris with his Catalan anarchist friend and dealer Pere Mañach, and the two young men immersed themselves in the debauchery of the Parisian demi-monde. This dizzying mixture of professional success and personal tragedy brought Picasso's creative genius to a climax. Central to this artistic narrative is La Gommeuse: portrayed in an absinthian haze of sexual ennui, she is both temptation and downfall incarnate, a high priestess of melancholy and a siren of joie de vivre. The reverse of La Gommeuse adds another fascinating aspect to the work’s history. Conservation arranged by Mr. Koch in 2000 revealed a portrait of Pere Mañach on the reverse of the canvas, which had been hidden under lining for a century. The whimsical and wicked rendering depicts the dealer wearing an exotic headdress, with his head on a female body in a dancer’s leap. Scholarship has suggested that Picasso was frustrated with Mañach's professional dealings during the summer of 1901, and this outrageous portrait encapsulates their tumultuous friendship. The reverse painting is inscribed “Recuerdo a Mañach en el día de su santo” [I remember Mañach on his Saint’s Day], suggesting that Picasso gifted La Gommeuse to his friend on the Feast of Saints Peter & Paul (29 June), with the scene acting as his personal version of a boisterous birthday card.

Appreciating the unique art historical insight that this rediscovered work offers into the young artist’s life, Mr. Koch constructed a custom display in his home so that both compositions could be viewed from opposite sides of the same wall.

Recent scholarship devoted to Picasso's production of 1901 suggests that the present work was acquired by Ambroise Vollard sometime after 1906. Inlater years, it came into the possession of the young New York dealer Lucien Demotte, who sold it to Josef von Sternberg (1894-1949), one of the most acclaimed Hollywood film directors of the 1930s. Sternberg is best remembered as the director of the 1930 film The Blue Angel,in which Marlene Dietrich made her screen debut as the louche cabaret performer Lola Lola. It appears that Sternberg acquired this work about one year after the release of The Blue Angel,so the subject of La Gommeuse would have held great significance for the director.

The upcoming November auction marks the fourth occasion that Sotheby’s has offered La Gommeuse at auction. Sternberg first sold the picture in 1949 at Parke-Bernet Galleries in New York, where it was purchased for $3,600. It was later acquired by Jacques Sarlie, a Dutch-born financier based in New York, who had befriended Picasso after the war and amassed a large collection of the artist's work from every period. Sarlie sold this picture at Sotheby's in London in 1960, at which point it was acquired by a dealer for a private collection. The picture was later offered for sale at Sotheby's in 1984, when it was purchased by Bill Koch, who has kept it in his private collection for the last 30 years. Picasso’s Blue Period works are exceptionally rare, with most residing in prestigious institutional collections including: The Metropolitan Museum of Art, New York; the Guggenheim Museum, New York; the Musée Picasso, Paris; and the Art Institute of Chicago. Works from this seminal moment in the artist’s oeuvre recently were celebrated in the Courtauld Institute of Art’s 2013 exhibition Becoming Picasso: Paris 1901.

Claude Monet’s Nymphéas are amongst the most iconic and celebrated Impressionist paintings. The profound impact these pictures have made on the evolution of Modern Art marks this series as Monet’s greatest achievement. The famous lily pond in his garden at Giverny provided the subject matter for most of his major late works. These spectacular canvases document the changes in his style and his constant pictorial innovations as he continued to paint this theme until his death in 1926. The present work dates from circa 1908 when he painted what are arguably the finest examples from the series. The canvas here is an extraordinary example of the artist's virtuosity as a colorist. The surface texture is rich with detail, particularly in the passages where the blossoms float atop the water. This distinction between reflection and surface, water and flora, and the general clarity of the scene are particularly striking in Monet's canvas here, and evidence its distinction as one of the most technically sophisticated of the entire series.

Mr. Koch’s Nymphéas was once in the prestigious Cannone Collection, formed by the Parisian pharmacist and industrialist Henri Canonne, where it remained with his family for over seven decades. Sotheby’s has sold 15 works by Monet to-date in 2015, which together have achieved $209 million. Those works were led by another example from the Nymphéas series from 1905, sold at Sotheby’s New York this May for $54 million.

Posted by Jonathan Kantrowitz at 7:50 AM