The Isabella Stewart Gardner Museum in Boston will be the sole venue for the first ever monographic exhibition dedicated to Carlo Crivelli in the United States. Ornament and Illusion: Carlo Crivelli of Venice opens Oct. 22 and runs through Jan. 25, 2016.

Carlo Crivelli (about1435–about1495) is one of the most important–and historically neglected –artists of the Italian Renaissance. Distinguished by radically expressive compositions, luxuriant ornamental display, and bravura illusionism, his works push the boundaries between painting and sculpture.

Crivelli manipulated the surface of each one with rare mastery of his medium, crafting visionary encounters with the divine, forging the modern icon, and offering a powerful alternative to new models of painting associated with Florence.

The exhibition brings together 23 paintings and the artist’s only known drawing. Newly cleaned and restored, the Gardner’s iconic Saint George Slaying the Dragon is the focal point for a two-part installation. The first reunites four of six surviving panels from

of which the Gardner painting is a fragment. The second part introduces visitors to the artist’s repertoire of dazzling pictorial effects with some of his most important works in Europe and the United States.

Included in Ornament and Illusion are unprecedented loans from 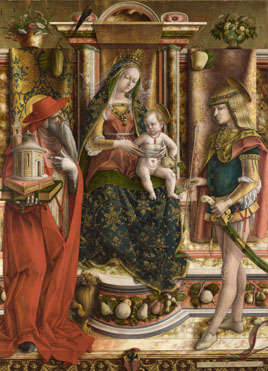 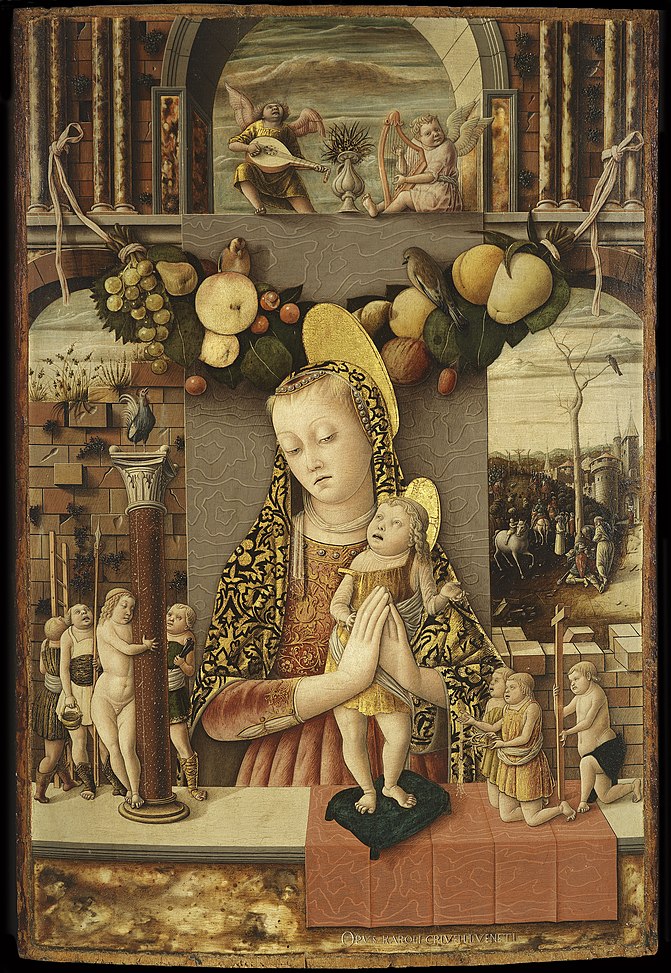 Madonna and Child Enthroned with Donor

"Remember me, O Mother of God. O Queen of Heaven, rejoice." These words, taken from an Easter psalm sung in the Virgin's honor, appear on the golden arch at the top of Carlo Crivelli's Madonna and Child Enthroned with Donor. The donor, the Albanian ecclesiastic Prenta di Giorgio, kneels in prayer near the Virgin's crown. Crivelli's painting originally constituted the central section of a polyptych in the parish church at Porto San Giorgio, near Fermi. The crisp, sculptural forms reflect Crivelli's probable training in the humanist center of Padua. Yet the manner in which Crivelli's figures are modeled in light and shade also expresses a broader Renaissance concern with direct observation of nature.

the National Gallery of Art, Washington, D.C.; and

This emotionally charged image of the Pietà probably comes from the uppermost tier of an altarpiece Crivelli painted for the church of San Domenico at Ascoli Piceno in the Marches. Known as the Demidoff altarpiece, it is widely considered Crivelli's masterpiece; the principal panels are in the National Gallery, London. Crivelli's art contrasts ornamental effects with details of extreme realism—such as the wounded hand hanging over the tomb’s edge. The fine seventeenth-century frame was made for it by the Barberini family in Rome whose emblem—the bee—adorns each corner.

Together, the works assembled in Boston reveal the artist’s astonishing skill, encompassing artistic vision, and relentlessambition, restoring Crivelli to his rightful place in the pantheon of Renaissance painters.

Crivelli was esteemed in his own time as a painter of rank and status. Born in Venice, he trained locally and joined a workshop in the mainland city of Padua, learning from the same master as the celebrated artist Andrea Mantegna (1430/1–1506). Exiled for adultery shortly after returning to Venice in 1457, Crivelli then embarked on a peripatetic career. Early successes on both sides of the Adriatic led to prestigious commissions in the Marches, a mountainous region of northeast Italy defined by its religious and ethnic diversity and ruled by competing feudal lords. He signed the immense high altarpieces for the cathedrals of Ascoli Piceno, in 1473, and Camerino, around 1490. Recognized for his remarkable artistic accomplishments with the aristocratic title of “knight,” Crivelli died around 1494.

Great review
Posted by Jonathan Kantrowitz at 11:51 AM