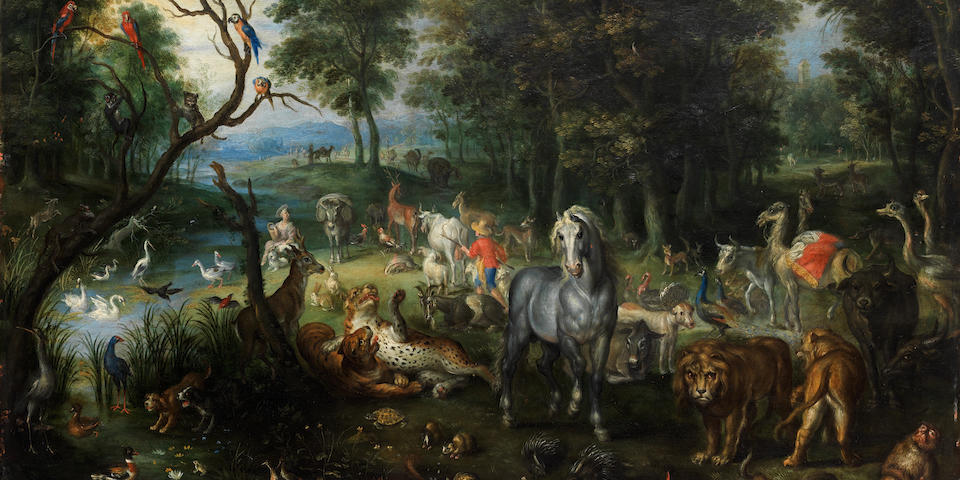 Jan Brueghel the Younger
(Antwerp 1601-1678)
The Four Elements: An Allegory of Earth; An Allegory of Water; An Allegory of Air; and An Allegory of Fire 33.6 x 50cm (13 1/4 x 19 11/16in).; 32.9 x 48cm (12 15/16 x 18 7/8in).; 32.9 x 48cm (12 15/16 x 18 7/8in).; and 32.9 x 48.1cm (12 15/16 x 18 15/16in). (4)
An astonishing set of four oil on copper panels by Jan Brueghel the Younger (1601-1678) leads the Old Master Paintings sale at Bonhams New Bond Street on Wednesday 3 July. The Four Elements: An Allegory of Earth; An Allegory of Water; An Allegory of Air; and An Allegory of Fire have been miraculously well preserved as a quartet for almost 400 years, and the set has an estimate of £800,000-1,200,000.
The series is remarkable, primarily because its main subjects - the landscapes, figures, flowers and animals - have all been confirmed by art historian and Brueghel specialist, Dr. Klaus Ertz, to be by Brueghel's own hand. This is a rarity, as it was common practice for him to collaborate with many of his fellow artists, including Rubens and Hendrick van Balen.
Allegories of the Four Elements had become a well-established theme of Renaissance painting by the time Brueghel began this series, around 1625, yet he approached these with a youthful flair.
Writing in Bonhams Magazine, art historian and critic Susan Moore describes his innovative composition of An Allegory of Earth: "Dispensing with the usual Ceres, goddess of agriculture and fertility, he has produced instead a paradise landscape. Such gatherings of beasts had become a hugely popular genre, whether ostensibly representing mythological subjects such as Orpheus charming the animals, or biblical scenes. Here, a closer inspection suggests the latter, a sense of a procession of creatures making their way two by two towards a tiny ark visible in the background."
The vogue for 'paradise landscapes' were symptomatic of the era of the Scientific Revolution when connoisseurs began to assemble collections of natural history. Brueghel drew upon these collections for research so that he could depict flora and fauna with technical accuracy. The subject matter also gave him free rein to explore his love for exotic nature as well as to imbue his landscapes with religious and classical symbolism.
Andrew McKenzie, Department Director of Old Master Paintings, said, "It is extremely rare to find fresh examples of this importance coming to market. We are also very grateful to Dr Klaus Ertz for confirming the attribution, and that, in his view, the landscapes, animals, flowers and figures are all by the hand of Jan Brueghel the Younger."
For more on Brueghel and the Four Elements, read Susan Moore's full article in Bonhams Magazine, Issue 59, pages 30-33: https://www.bonhams.com/publications/bonhams_magazine/28142/
Posted by Jonathan Kantrowitz at 8:36 AM