More than 200 drawings by Leonardo da Vinci, the largest exhibition of the artist’s work in over 65 years, opens at The Queen’s Gallery, Buckingham Palace tomorrow (Friday, 24 May 2019) to mark the 500th anniversary of Leonardo’s death. Selected entirely from the unrivalled holdings of the Royal Collection, Leonardo da Vinci: A Life in Drawing explores the full range of Leonardo’s interests – painting, sculpture, architecture, anatomy, engineering, cartography, geology and botany – providing a comprehensive survey of Leonardo’s life and a unique insight into the workings of his mind.

The exhibition follows 12 simultaneous exhibitions of Leonardo’s drawings from the Royal Collection at museums and galleries across the UK, which attracted more than one million visitors. In November 2019, a selection of 80 drawings will travel to The Queen’s Gallery, Palace of Holyroodhouse, Edinburgh to form the largest exhibition of Leonardo’s works ever shown in Scotland (22 November 2019 – 15 March 2020). Together, these 14 exhibitions offer the widest-ever UK audience the opportunity to see the work of the Renaissance master.

Leonardo was revered in his day as a painter, but he completed only around 20 paintings. He was respected as a sculptor and architect, but no sculpture or buildings by him survive. He was a military and civil engineer who plotted with Machiavelli to divert the river Arno, but the scheme was never realised. As a scientist, he dissected 30 human corpses with the intention of compiling an illustrated treatise on anatomy, and planned other treatises on light, water, botany, mechanics and much else besides, but none of these was ever finished. As so much of Leonardo’s work was unrealised, many of his achievements survive only in his drawings and manuscripts. Few of Leonardo’s drawings were intended for others to see: drawing served as Leonardo’s laboratory, allowing him to work out his ideas on paper and search for the universal laws that he believed underpinned all of creation.

Exhibition curator Martin Clayton, Head of Prints and Drawings, Royal Collection Trust, said, ‘The drawings of Leonardo da Vinci are both beautiful and the main source of our knowledge of the artist.  We hope that as many people as possible will take this unique opportunity to see these extraordinary works, which allow us to enter one of the greatest minds in history.’

Leonardo da Vinci: A Life in Drawing is organised both chronologically and thematically. Leonardo’s work is characterised by a multitude of simultaneous pursuits – artistic projects that stretched on for years or even decades, and scientific interests that evolved from the 1480s onwards. In the breadth of his interests, Leonardo was the archetypal ‘Renaissance man’, yet the full extent of his accomplishments, explicitly demonstrated through these personal sketches, was unknown to his contemporaries and immediate successors.

Each thematic grouping in the exhibition contains examples of the artist’s finest drawings. Key anatomical studies include 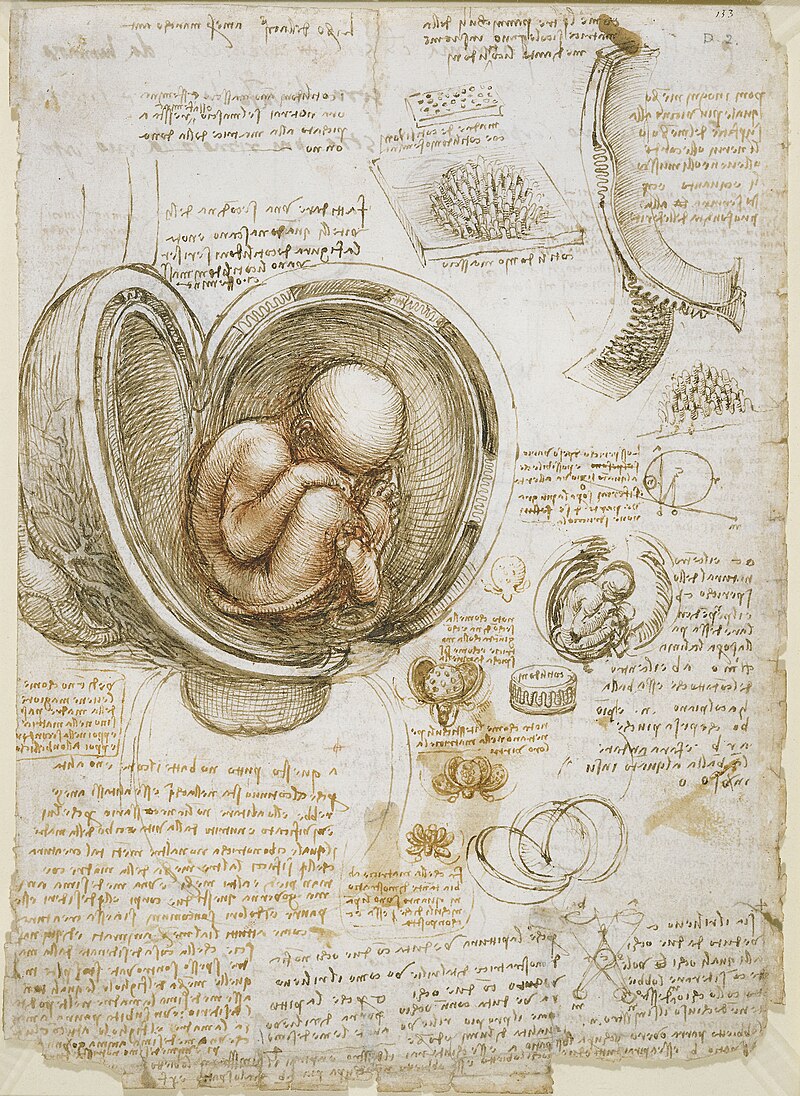 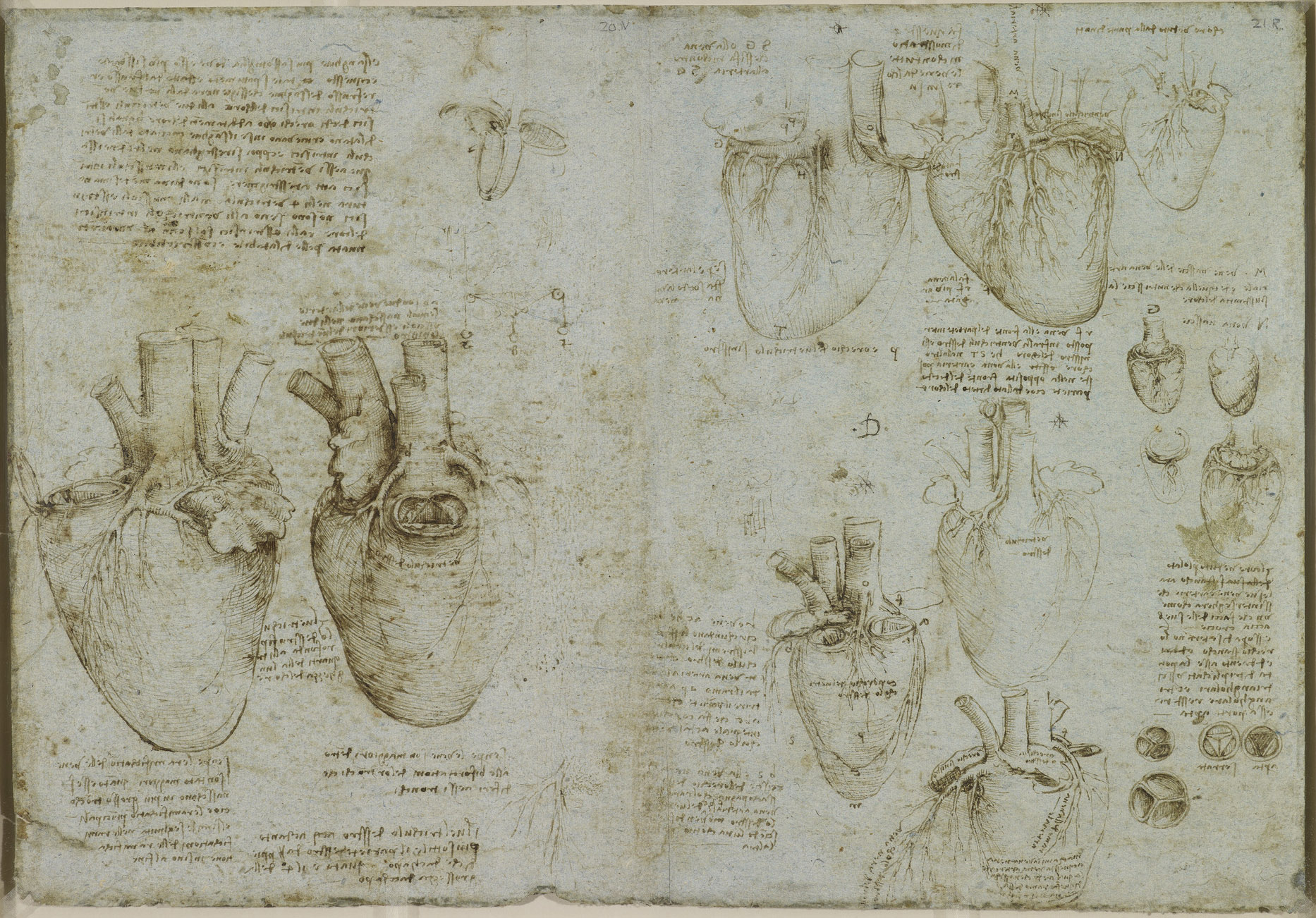 and The cardiovascular system and principal organs of a woman (c.1509–10) (on which Leonardo’s thumbprint can be seen).

and the only six surviving preparatory studies for the Last Supper (1495–8). One of these is the sole compositional study that exists for the painting, fluidly sketched by Leonardo on a sheet of paper covered with other drawings.

The natural world is explored by Leonardo through detailed landscapes, studies of water and in numerous botanical studies developed by the artist in preparation for the now lost painting Leda and the Swan. Maps such as A map of Imola (1502) were created using highly accurate techniques of measurement.  Drawings of horses abound throughout Leonardo’s work, including studies for three equestrian monuments.

The second, on public display for the first time, is A sketch of Leonardo (c.1517–18), made by a second assistant. Completed in the years shortly before Leonardo’s death in 1519, these depictions of the artist, displayed alongside much of his life’s work, bring us closer to a sense of Leonardo the man.