On 3 July, Sotheby’s will bring to auction 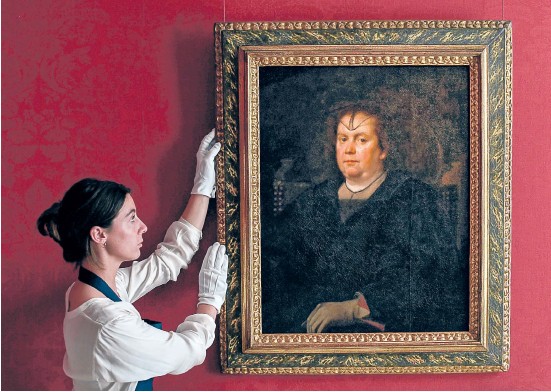 a newly-discovered painting of Olimpia Pamphilj by Spanish master, Diego Velázquez. Lost for almost three centuries, this captivating portrait once formed part of the illustrious collection of Don Gaspar Mendez de Haro y Guzman, 7th Marques del Carpio - one of  the  greatest  patrons  and  collectors  of  arts  in  17th-century  Italy.   Last  recorded  in  1724,  it  subsequently  disappeared  without  trace.  The  whereabouts  of  the  painting  remained  completely  unknown  until  one  day,  an  unattributed  work,  sold  in  the  1980s  as  ‘anonymous  Dutch  school’,  was  brought  into  Sotheby’s  Amsterdam  office.  An  intriguing  old  cypher  hidden  on  the  back  of  the  painting  prompted  Sotheby’s  specialists  to  begin  a  process  of  research  and  discovery  – all of  which  ultimately lead to the realisation that this striking portrait was the long-lost original by Velázquez:  a  painting much revered in its day and executed during the artist’s ‘golden period’.

James  Macdonald,   Sotheby’s   Senior   Specialist   of   Old   Master  Paintings,  said:  ‘The   search   for   Velázquez’s  portrait  of  Donna  Olimpia  is  finally  over.  Painted  in  Rome  in  1650  by  perhaps  the  greatest  portrait  painter  of  all  time,  this  depiction  of  one  of  the  most  powerful  and  domineering  woman of her time has long been recorded through early documents and engravings but was lost for nearly  300  years.  Its  recent  rediscovery  represents  a  highly  significant  addition  to  the  great  Spanish  master’s  oeuvre  and  the  painting  can  be  counted  amongst  only  a  handful  of  works  by  the  artist  remaining in private hands today.’

Painted in  1649-50 during Velázquez’s second  trip  to  Rome,  the Portrait  of  Olimpia  Maidalchini  Pamphilj (est. £2 - 3 million) will be offered at Sotheby’s London on July 3rd in the context of one of the  strongest  Old  Master  sales  ever  staged.  On  view  to  the  public  from  28th  June  till  3rd  July,  it  will  hang  alongside  major  works  by  the  titans  of  British  Art  –  Thomas  Gainsborough,  John  Constable,  J.M.W.  Turner  – as  well  as  leading  Renaissance  and  Baroque  painters  Botticelli,  Pieter Brueghel the Younger  and  Sir  Peter  Paul  Rubens.  A  newly  discovered  drawing  by  16th  century  Mannerist  artist  Rosso Fiorentino will also be unveiled to the public for the first time.  The  portrait  of  Olimpia  belongs  to  a  moment  during  which  Velázquez  produced  some  of  his  most  celebrated  masterpieces,  including  the  Portrait  of  Pope  Innocent  X  –  a  work  that  was  to  have  a profound  influence  on  subsequent  generations  of  artists,  culminating  most  famously  in  Francis  Bacon’s seminal Pope  series.  One  of  a  few,  and  the  only  lady,  to  be  selected  to  be  painted  by  Velázquez during his visit, the painting depicts   a stout, strong-jowled woman, and exudes the artist’s unique ability to capture and convey the personalities of his sitters.

Commissioned  either  by,  or  for  Olimpia  herself,  the  painting  is  documented as  having been  in  the  collections  of    numerous  notable  figures  of  17th  and  18th  century  Rome,  including  the  sitter’s  grandson  Cardinal  Camillo Massimi, a famous connoisseur and art  patron,  and Don Gaspar Mendez de Haro y Guzman, 7th Marques del Carpio,  who by  his  death  had amassed over 1,800 paintings for his  collection,  including  no  fewer  than  six paintings  by  Velázquez. Well  documented  in  a  number  of  collections  thereafter,  the  painting  was  last  recorded  as  being  in  the  collection  of  Cardinal  Pompeo  Aldrovandi of Bologna and Rome in 1724, after which traces of the work are lost.

Born  into  a  noble  family  in  Viterbo  in  1591,  Olimpia  married  and  was  widowed  twice,  latterly  by  Pamphilio Pamphilj, the elder brother of Cardinal Giambattista Pamphilj, later elected Pope Innocent X  in  1644.  The  Pope’s  sister-in-law  and  his  reputed  lover,   Olimpia  Pamphilj  was  one  of  the  most  influential  figures  at  the  papal  court  during  her  brother-in-law’s  tenure.  Her  influence  over  the pontiff  was  well-known  with  one  Cardinal,  Alessandro Bichi,  on  the  election  of  Innocent  in  October  1644, supposedly angrily declaring, “Gentlemen, we have just elected a female pope.”

Eleanor  Herman,  New  York  Times  best-selling  author  and  writer  of  a  captivating  biography  of  Olimpia Pamphilj, ‘Mistress of the Vatican’ comments: ‘The most powerful and notorious woman of her  time,  Olimpia  Maidalchini  was  a  baroque  rock  star.  Women  from  all  over  the  Catholic  world  came  to  Rome  to  station  themselves  outside  her  palace  to  cheer  as  her  carriage  rolled  out.  They  could  not  believe  that  a  female  from  modest  beginnings  had  risen  to  such  heights  –  running  the  nation  of  the  Papal  States  and  the  Catholic  Church,  an  institution  where  women  were  not  allowed  any power.’   Nicknamed  ‘Papessa’  –  the ‘lady  Pope’,  Olimpia  effectively  controlled  appointments  at  Papal  Court  with  candidates  for  vacant  episcopal  roles  applying  directly  to  her,  and the  office  typically  going  to  the  highest  bidder.

In  1645  she  received  the  title  Princess  of  San  Martino,  a  position  she  used  in court  to  bring  considerable  wealth  to  the  house  of  Pamphilj.  Her  influence  subsided  somewhat following the recalling by Innocent X of Fabio Chigi from Germany, who subsequently became Pope Alexander VII, however, in the last years of Innocent’s life, she guarded access to him and used her position for her own financial gain.

Having  constantly  feared  being  condemned  to  a  convent  as  a  young  woman  –  the fate  of  many  a  dowerless  young  lady  of  the  time  –  Olimpia  was  empathetic  to  the  plight  of  her  own  sex.  Contemporary  accounts  describe  how  she  gave  money  to  women  to  save  them  from  this  fate, delivering  provisions  to  convents  and  building  hundreds  of  homes  as  dowries  for  girls  who  would  otherwise not be able to marry and would be forced into a convent or prostitution. She was also said to  have  allowed  prostitutes  in  Rome  to  ride  in  carriages  bearing  her  coat  of  arms  to  indicate  that  they were under her protection.

Olimpia was also a patron of Roman culture sponsoring numerous artists, musicians, playwrights and sculptors  and  was  responsible  for  Gian  Lorenzo  Bernini’s  Fontana  dei  Quattro  Fiumi in  the  Piazza  Navona in Rome designed and created for Pope Innocent X in 1651.

ThePortrait of Olimpia Maidalchini Pamphilj was last documented alongside Velázquez’s celebrated portrait of her grandson, Cardinal Camillo Massimi, in the collection of Cardinal Pompeo Aldrovandi (1668 – 1752) of Bologna and Rome, in 1724. While the subsequent ownership of Camillo’s portrait is well-documented through to its current location in Kingston Lacy, Dorset, records of the portrait of Olimpia end with Aldrovandi.

The  only  clue  to  its  whereabouts  for  almost  300  years  before  it  re-appearance at a Dutch auction house in 1986, is an old custom stamp on the reverse of the former stretcher, indicating that the painting had left Italy in 1911. Brought  to  the  attention  of  Sotheby’s  specialists  in  Amsterdam  who  immediately  recognised  the  mysterious cypher on the back of the painting as that of Don Gaspar Mendez de Haro y Guzman, 7th Marques  del  Carpio,  the  process  of  establishing  the  true  creator  of  the  work  began  in  earnest.

Viewing  the  painting and  tracking  down  various  inventories  from  the  17th  and  18th  centuries, Sotheby’s Senior Specialist, James Macdonald, soon suspected that this striking portrait could be the hitherto  missing  original by  Velázquez. Showing  the  painting  to  key  experts  in  the  field,  the  attribution of the work was confirmed, making the portrait one of only a handful of paintings by the great Spanish artist left in private hands.

Another great discovery: a rare, long-lost drawing by Rosso Fiorentino.

Scrolling  through  a  batch  of  images  sent  through  from  around  the  world  via  Sotheby's  online  valuation  tool  Cristiana  Romalli,  Senior  Director  and  Italian  specialist  in  Sotheby’s  Old  Master  Drawings  Department,  paused  at  an  intriguingly  accomplished  sketch.  It  looked  to  her  like  an accomplished work by major Mannerist artist, Rosso Fiorentino, whose drawings are extremely rare.

Cristiana  retired  home  to  read  Giorgio  Vasari’s  ‘Lives  of  the  Artists’,  chronicling  the  lives  of  the  leading Italian artists of the early 16th-century. And there she found a reference to this work, since then unrecorded – lost from the canon of art history.

Vasari describes how, in 1524, Rosso set out from Florence to Rome, in search of work. He stopped en route in his home town of Arezzo, where he caught up with his old friend Antonio Lappoli (1492-1552).  Lappoli  –  a  less  successful  artist  than  Rosso  –  had  just  been  asked  to  complete  a  major  commission  in  Arrezzo:  a  rendering  of  the  Visitation,  for  the  family  chapel  of  a  wealthy  Aretine  citizen.  Lappoli  turned  to  his  friend  Rosso  for  help  and  inspiration,  and  Rosso,  forever  generous,  worked  up  this  beautifully  accomplished  composition,  which  Lappoli  then  used  as  the  basis  for  his  painting.

The beautiful drawing by Rosso – described by Vasari asmolto bello – was believed by scholars to be lost.  Its  re-emergence  now  adds  significantly  to  our  understanding  of  the  working  methods  of  an  artist  known  for  his  eccentricity,  and  expressive,  unconventional  style.  Only  the  second  drawing  by  Rosso  to  have  appeared  on  the  market  in  over  half a  century,  its  survival  and  fine  state  of  preservation is nothing short of miraculous.

That it has clearly been handled with care over the last 500 years is perhaps largely thanks to an old attribution to Michelangelo, penned on the back of the drawing in a 17th-century hand; partly too because it has enjoyed the lucky fate of having, since the 18th century, just one careful family of owners. Watch  Cristiana  Romalli  talk  about  the  process  of  discovery  here.  The drawing  will be  offered  as  a  highlight of Sotheby’s Old Master and British Works on Paper sale on 3 July.
Posted by Jonathan Kantrowitz at 10:57 AM