The National Gallery in London is marking the 500th anniversary of Leonardo da Vinci’s death with a display presenting the exceptional loan (now through June 23, 2019) of the recently restored 'Flora' by Francesco Melzi from the State Hermitage Museum, St Petersburg.

Francesco Melzi (1493–1570) was a wealthy gentleman of Milan, and the favoured assistant and companion to Leonardo in his final years. As his primary heir, he was largely responsible for preserving Leonardo’s notebooks and drawings for posterity.

Though Leonardo’s writings and inventions were not given due recognition for centuries, the legacy of his painting style was immediate and substantial. The term ‘Leonardeschi’ has since been used to identify artists centred in Milan who were taught by or associated with Leonardo, or whose work bears his influence. This exquisite painting by Francesco Melzi depicts Flora, the goddess of springtime and flowers, seated in a leafy grotto sprouting with fern and ivy. Flora’s exposed breast and the way she tenderly inspects a sprig of aquilegia – a symbol of fertility – emphasise her role as ‘mother of flowers’. On her lap she caresses a spray of jasmine, signifying purity, beside anemones representing rebirth.
Recent restoration undertaken by the State Hermitage Museum has uncovered the picture’s true colours, including the powerful ultramarine blue; and hidden details have been revealed, such as the flowers growing from the walls of the dimly lit grotto.

The painting reflects the influence of Melzi’s teacher, Leonardo, to whom it was attributed at the time of its acquisition from the Dutch Royal collection in 1850. The female facial type with its downcast look is characteristic of Leonardo’s Milanese style, as is the mastery of subtle modulations of tone, known as ‘sfumato’. 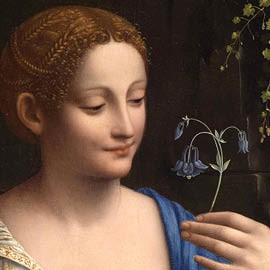 Francesco Melzi and the Leonardeschi

23 May – 23 June 2019
The rare loan of a painting by Leonardo da Vinci’s favourite pupil, Francesco Melzi, is the centrepiece of a special display marking the 500th anniversary of Leonardo’s death.
'Leonardo’s Legacy: Francesco Melzi and the Leonardeschi' celebrates the work of Leonardo’s followers, the ‘Leonardeschi’. At its heart is Melzi’s 'Flora', an exceptional loan from the State Hermitage Museum, St Petersburg, which has recently undergone restoration. The National Gallery does not own a painting by Melzi, so this display gives the opportunity to view a picture by this important artist alongside nine key works by other Leonardeschi. This is the first time 'Flora' has been exhibited in the UK, and the first time it has been seen outside of Russia since its restoration.
The free display in Room 12 will run from 23 May to 23 June 2019. 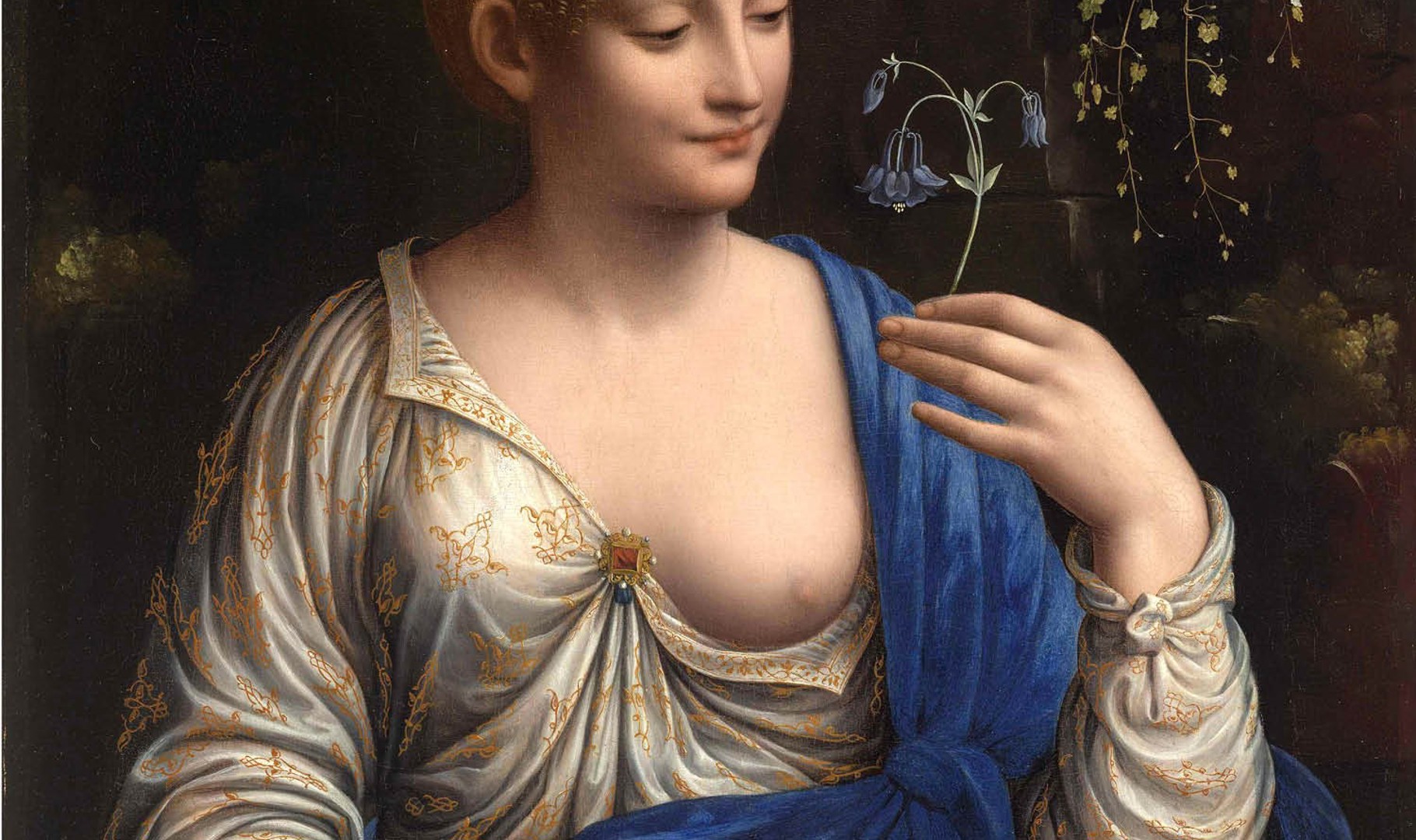 Francesco Melzi (1493–1570) was born into a noble family in Milan. He became Leonardo’s favoured pupil after joining his Milanese workshop in around 1508. Melzi worked for Leonardo in Rome, and followed him to France, where he stayed until Leonardo’s death in 1519.
It is largely due to Melzi’s efforts that Leonardo’s notebooks and drawings have survived. Leonardo left ‘each and every one’ of his notebooks to Melzi, who took them back to Milan. The artist and biographer, Giorgio Vasari (1511–1574), visited Melzi in his old age, and reported that Leonardo’s ‘much beloved’ pupil had inherited his late master’s anatomical designs: ‘he holds them dear, and keeps such papers together as if they were relics’.
Melzi’s 'Flora' is so close to the style of his teacher that for many years it was thought to be by Leonardo himself. The female facial type with its downcast look is characteristic of Leonardo, and comparable to the face of the Virgin in The Virgin of the Rocks and The Burlington House Cartoon (both on display in Room 66). Melzi also uses Leonardo’s ‘sfumato’ technique of blurred outlines to model forms, while the depiction of the plants and Flora’s complicated hairstyle shows his understanding of Leonardo’s scientific discoveries.
After being acquired by the Hermitage as a Leonardo in 1850, the picture has since been attributed to other prominent Leonardeschi – Bernardino Luini, Andrea Solario and Giampietrino – before finally settling on Melzi in 1899. Few works by Melzi are known: only two works signed by him have survived (both in Milan), and a few others are attributed to him, including a chalk portrait of Leonardo in the Royal Collection Trust. The attribution of 'Flora' to Melzi is based on the painting’s close similarities to another work which has been attributed to the artist: 'Vertumnus and Pomona', at the Gemäldegalerie in Berlin (see image below). The attribution is also supported by the 18th-century art connoisseur Pierre-Jean Mariette’s record of a painting depicting Flora by Melzi in Paris which had been mistaken by at least one other scholar as a work by Leonardo himself. 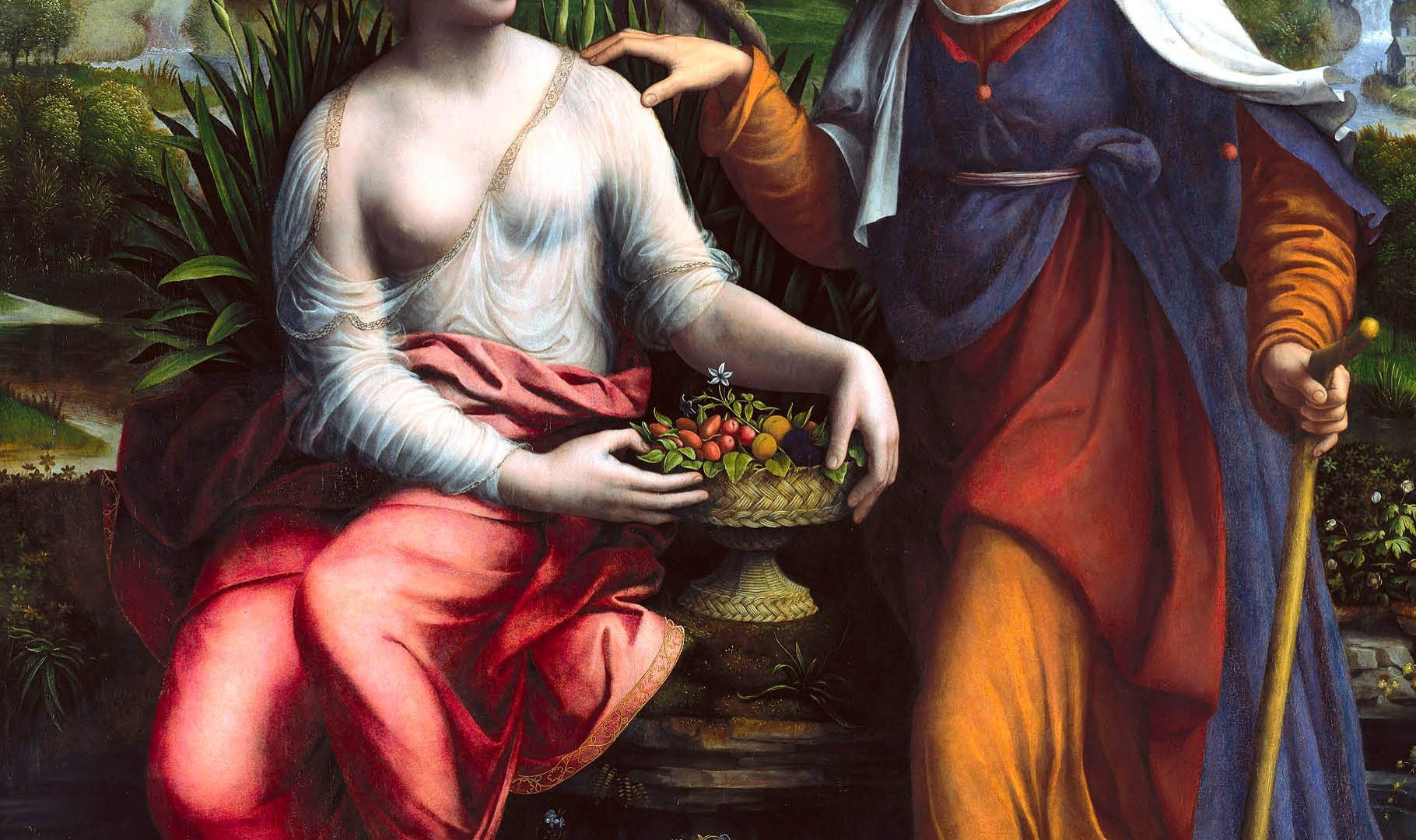 Melzi has taken Leonardo’s meticulous approach to painting plants and also replicates the complex hair-styling he uses in other portraits.

Director of the National Gallery, Dr Gabriele Finaldil says, “We are delighted to be able to mark the 500th anniversary of Leonardo da Vinci’s death with a display presenting the exceptional loan of the recently restored ‘Flora’ by Francesco Melzi .The State Hermitage Museum has long-standing and close ties to the National Gallery and this Room 12 display is a superb example of international museums working together.”

Professor Piotrovsky, Director of the State Hermitage Museum, St. Petersburg,says,
“We are excited to have loaned ‘Flora’ by Francesco Melzi to the National Gallery and to see her as the central focus of this fascinating display which explores the work of Leonardo’s closest friends and disciples. This represents the first time that ‘Flora’ has been seen outside of Russia since it was restored by Maria Shulepova, revealing details and rich colouring which had been lost for decades under layers of old varnish. We hope that visitors in London will enjoy seeing this rare masterpiece by Leonardo’s favourite pupil, and we are pleased to further strengthen our long and valued friendship with the National Gallery.”

The Virgin of the Rocks 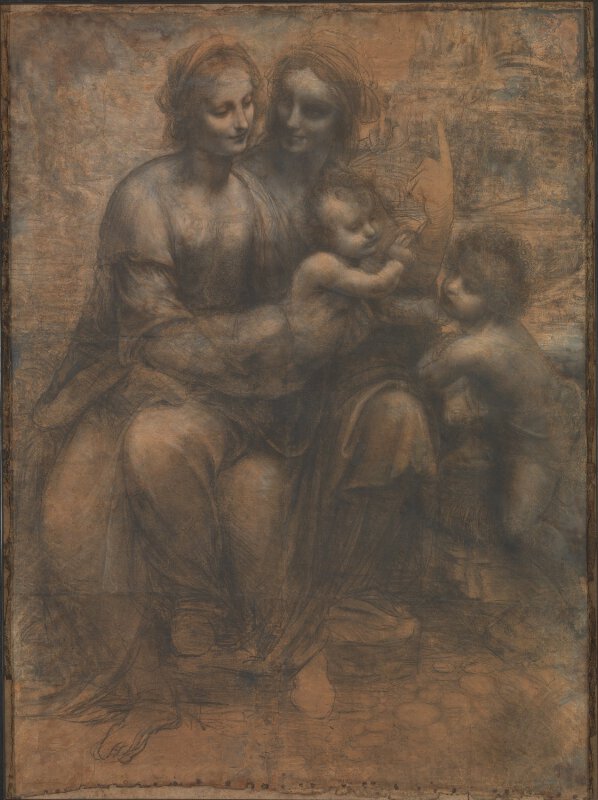 and The Burlington House Cartoon

– can be seen in Gallery 66 of the National Gallery.
Posted by Jonathan Kantrowitz at 9:58 AM