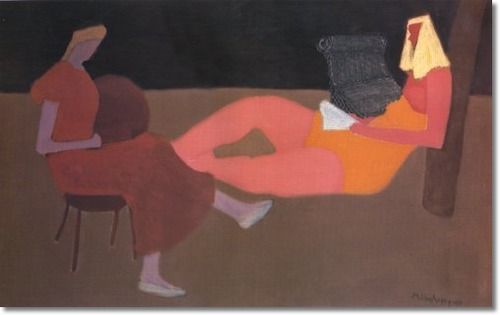 Porch Sitters from 1952 (estimate $2/3 million). Belonging to a remarkably innovative period in Avery’s career, the work depicts Avery’s daughter, March, reading alongside a female companion, likely painted in Woodstock, New York, where the Avery family often spent the summers. Porch Sitters exemplifies the evolution in treatment of color that Avery’s work underwent in the early 1950s, and illustrates the artist’s innovative experiments with the expressive power of color. 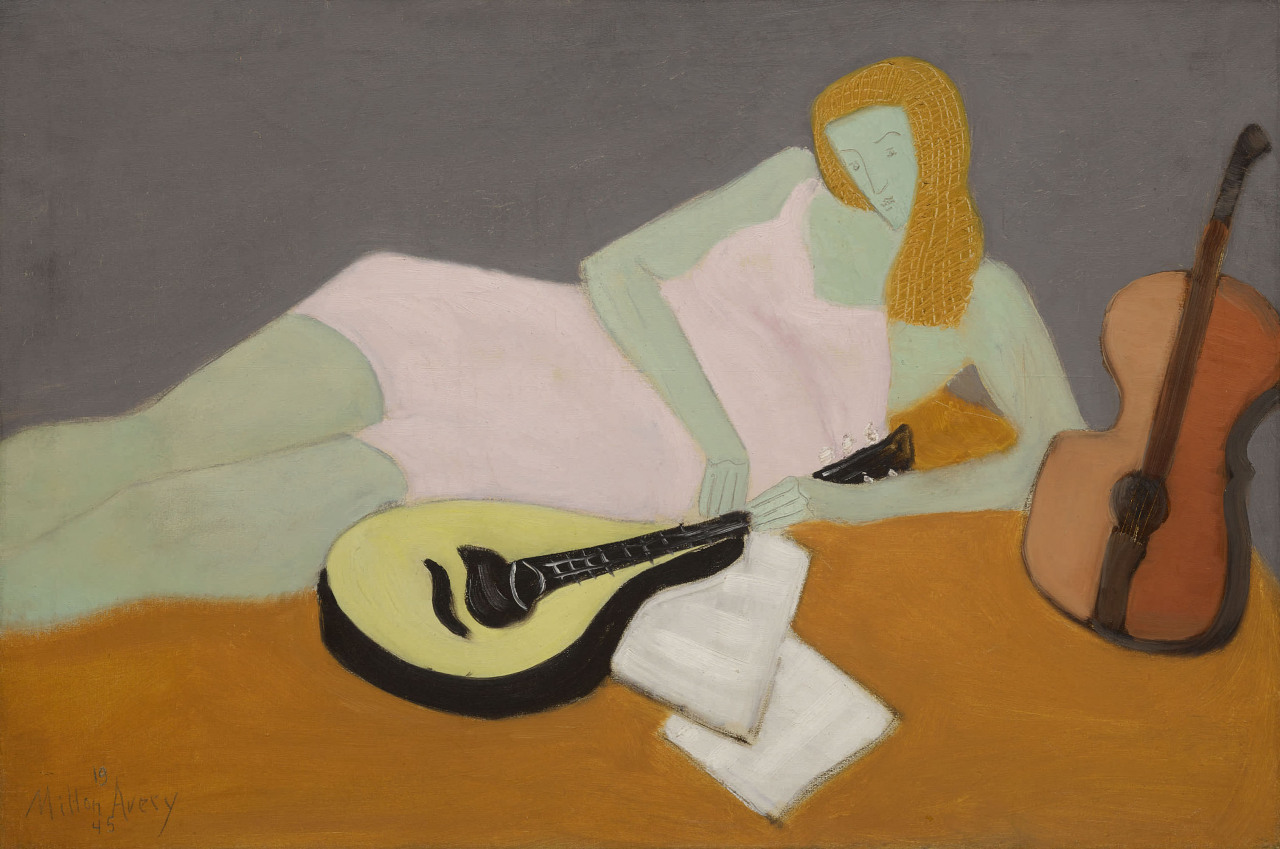 The collection also offers Milton Avery's Young Musician from 1945, painted when the artist’s mature style had fully emerged (estimate $1.2/1.8 million). Many scholars attribute the Avery’s stylistic developments during this period to his new affiliation with Paul Rosenberg's gallery, as the artist was exposed to the work of artists such as Pablo Picasso and Henri Matisse, who Rosenberg also represented. In Young Musician, Avery presents the traditional subject of a female figure in repose, accompanied by a mandolin, a guitar and sheet music. In both the subject matter and treatment of his forms, Avery’s admiration for Picasso is fully displayed. 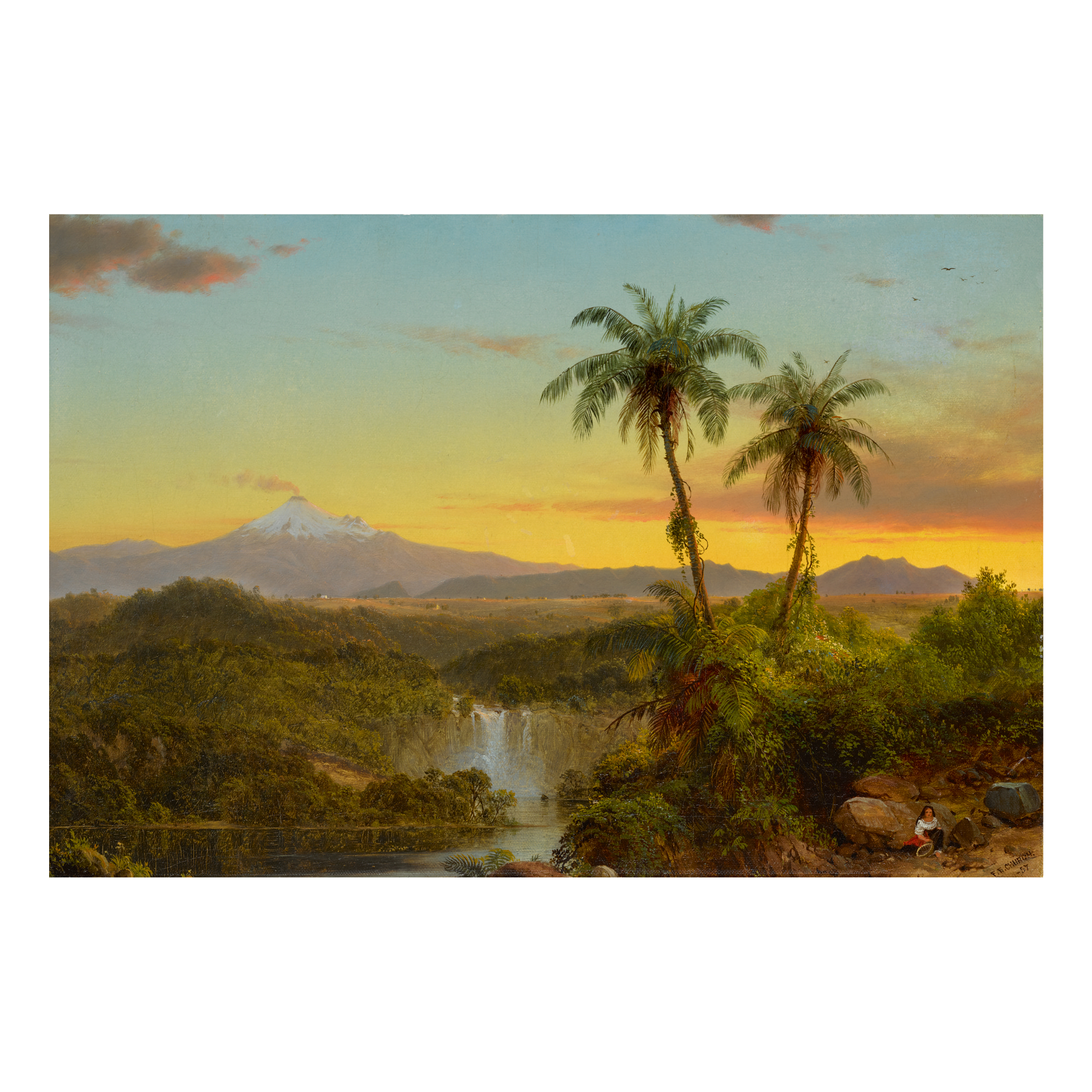 Frederic Edwin Church’s South American Landscape is an important example of his renowned images of the dramatic Ecuadorian countryside (estimate $1.5/2.5 million). Departing from New York City in 1853, Church and fellow landscape painter Cyrus West Field embarked on two trips to Ecuador in 1853 and in 1857 as part of Church’s sweeping exploration of South America. Church was particularly enthralled by the active volcanoes that protruded from the landscape. The present work depicts the momentous Cotopaxi volcano. Soaring 20,000 feet above sea level, Cotopaxi is the highest peak to mark the Andes mountains, and was a geological phenomenon in the 19th century. Here, Church incorporates elements of expansive mountain terrain, lush vegetation and rising palms in order to construct the ideal landscape. 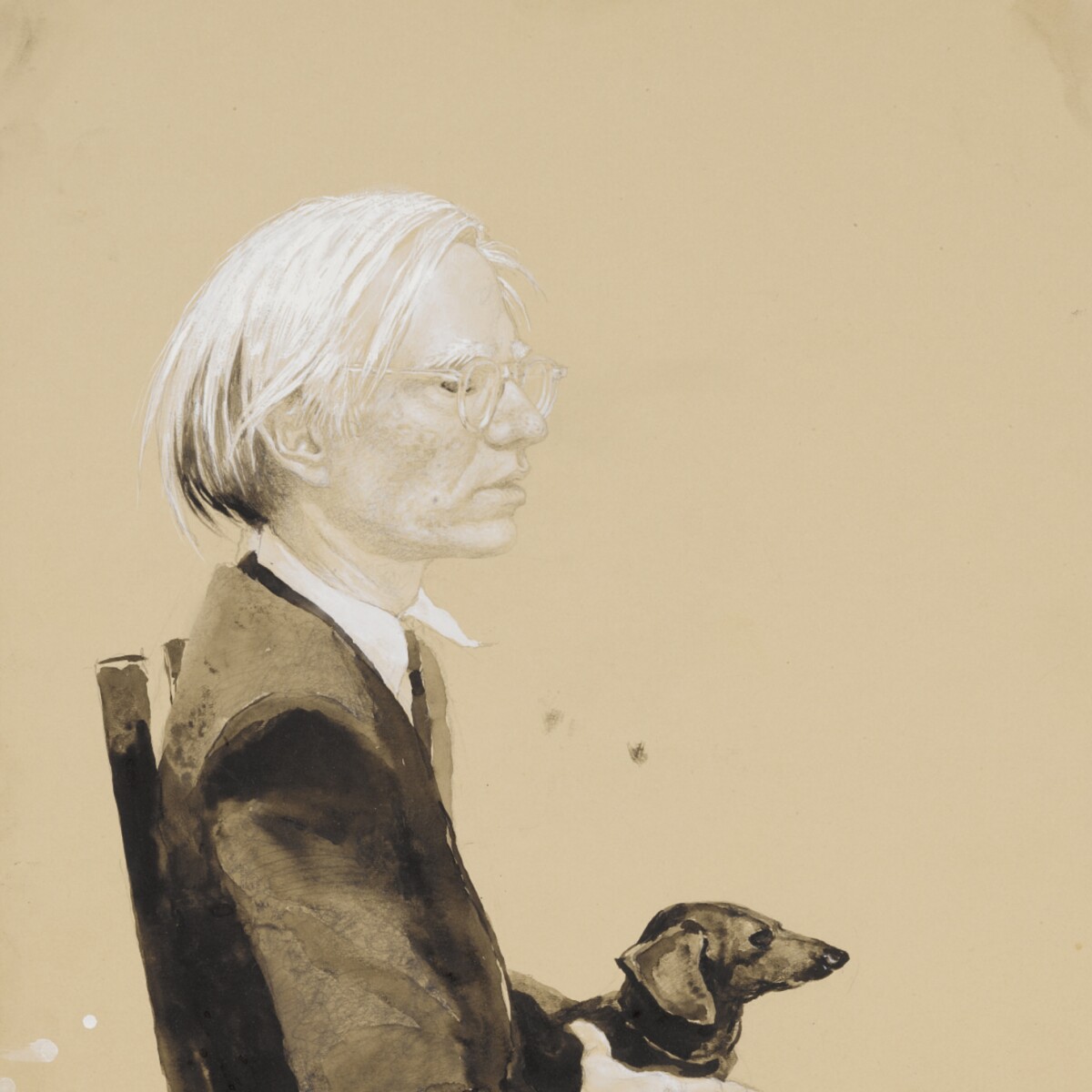 Executed in 1976, Jamie Wyeth’s Andy Warhol Sitting with Archie (No.9) depicts the iconic American artist and his dog, Archie (estimate $60/80,000). According to art historian David Houston, while Wyeth was working in New York in the 1970s – the epicenter of art, fashion and high society – the artist was introduced to Warhol by photographer and socialite Peter Beard. In 1976, Warhol and Wyeth painted each other's portraits, an arrangement facilitated by Wyeth's friendship with American writer and cultural figure Lincoln Kirstein. Over the next four years, Wyeth enjoyed two extended residencies at the Factory, participated in four exhibitions, and shared an exhibition catalogue with Andy Warhol. This portrait will appear at auction for the first time in over three decades, having remained in the same private collection since 1980. 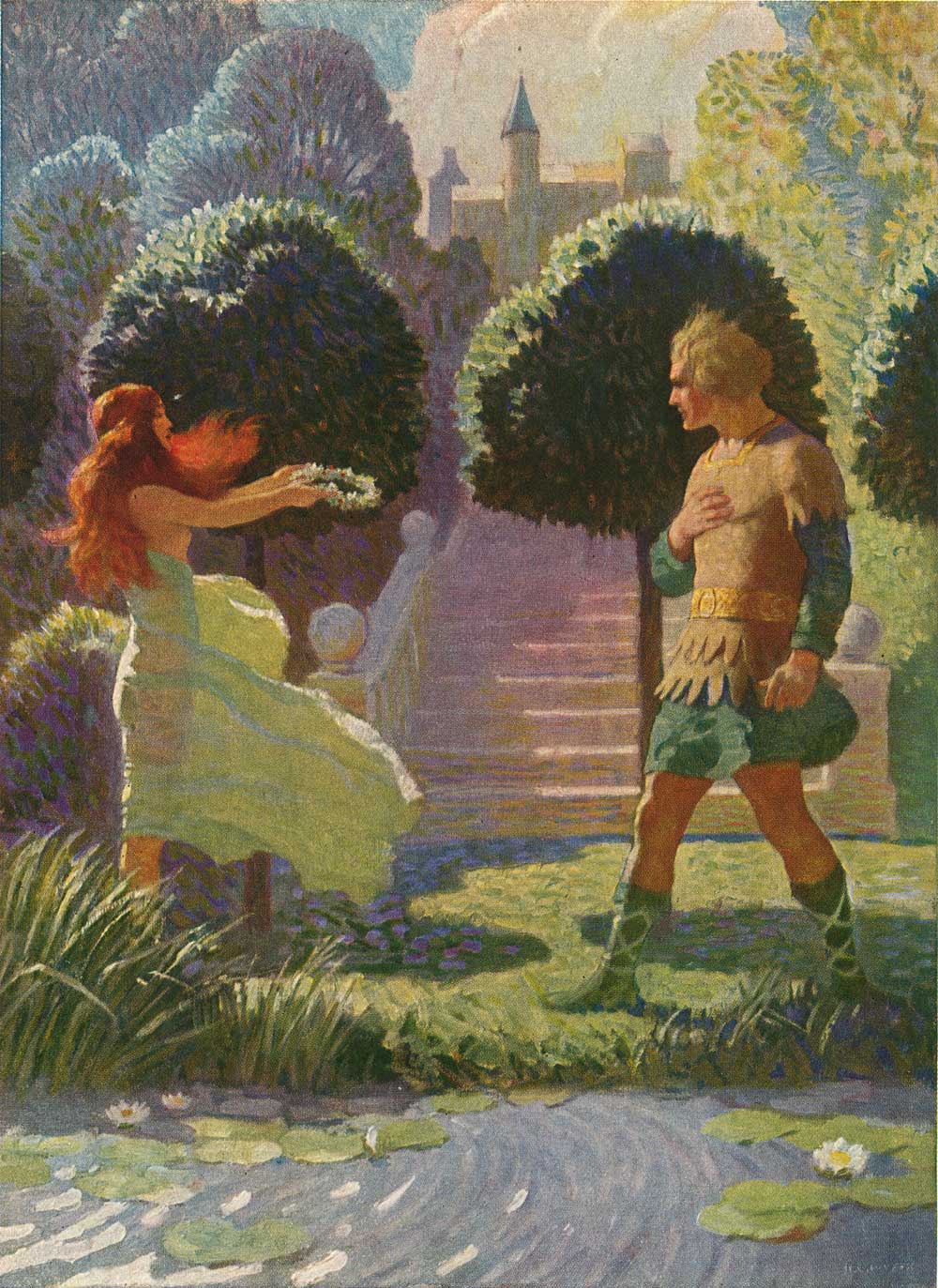 A selection of works by N.C. Wyeth is led by Ogier and Morgana from 1924 (estimate $400/600,000). Appearing at auction for the first time, the work was originally gifted by the artist to longtime general motors employee William Lewis after he visited Wyeth’s studio in 1926; it has descended through the Lewis family ever since. The painting belongs to a series of 11 works Wyeth created as illustrations for the 1924 edition of Thomas Bulfinch’s Legends of Charlemagne, including the present work. First published in 1863, Legends of Charlemagne recounts the tales and folklore that became associated with Charlemagne, who ruled Europe during the 8th century. Epitomizing Wyeth’s distinct romantic aesthetic, the present work illustrates the story of Ogier the Dane, a legendary knight of Charlemagne's court, and Morgana le Fay, a powerful enchantress who, according to Arthurian legend, served as King Arthur’s magical savior and protector. 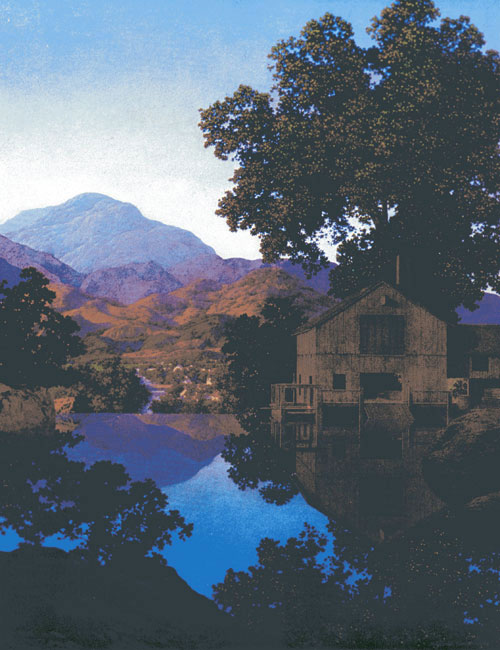 Works by Maxfield Parrish are highlighted by Mill Pond from 1945, which ranks among the most recognizable paintings of the artist’s career (estimate $600/800,000). In 1931, at the height of his popularity in America, Parrish issued a statement to the Associated Press announcing his decision to abandon the figurative work that had made him a household name. Four years later in 1935, he signed a contract with Brown & Bigelow to provide illustrations for the company’s popular line of calendars, greeting cards, and playing cards. Of the nearly 100 landscapes that Parrish produced for Brown & Bigelow, Mill Pond was the artist’s most successful. Throughout her career, Georgia O’Keeffe chose physical objects from nature – trees, flowers, leaves, animal bones, mountains – as subject matter for her work. Painted in 1923, Anthurium not only illustrates her deep admiration of the natural world, but also reveals her intent to distill abstract patterns from these organic sources (estimate $1.5/2.5 million). Reflecting the formal vocabulary O’Keeffe developed as an avant-garde American artist in the early decades of the 20th century, Anthurium masterfully exemplifies the deeply personal synthesis of realism and abstraction that pervades the entirety of her celebrated oeuvre.

Posted by Jonathan Kantrowitz at 11:43 AM