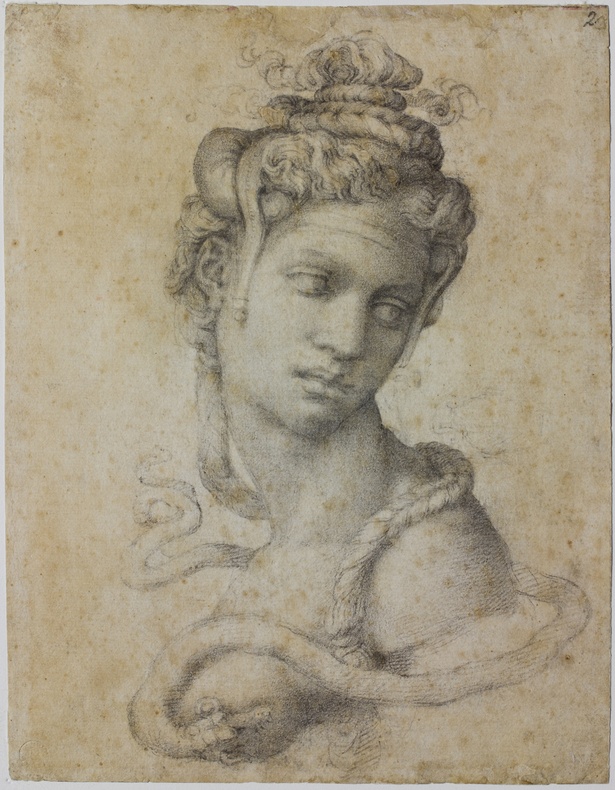 Michelangelo Buonarroti (b. 1475), one of the world’s most celebrated artists, pays a visit to Toronto this fall at the Art Gallery of Ontario (AGO). Despite his enduring fame, Michelangelo was dogged by relentless struggle, disappointment and even defeat throughout his 77-year career. Due to the fickle demands of important patrons, many of his most ambitious projects remained unfinished. Revealed through a selection of rare drawings, Michelangelo: Quest for Genius tells the story of a Renaissance master and the frustrations of his creative process. Michelangelo: Quest for Genius opens in Toronto on Oct. 18, 2014, and runs until Jan. 11, 2015.

Organized by the AGO in collaboration with the Casa Buonarroti, Florence, whose collection is formed from Michelangelo’s own, the exhibition centres on a loan of 30 drawings by Michelangelo’s hand. These drawings are among the best of the esteemed Casa Buonarroti’s collection and represent the range of Michelangelo’s work. Dating from before and after the completion of the Sistine Chapel, the works on display include preliminary drawings — both architectural and figural sketches — as well as presentation drawings.

Michelangelo: Fortifications for the Porta al Prato in Florence, c 1529. Photo courtesy Casa Buonarroti via the AGO "Madonna and Child," a drawing by Michelangelo from the collection of Casa Buonarroti in Florence, Italy)

Organized thematically, the exhibition takes a critical look at the notion of the genius at work, locating the creative search at the axis of ambition, exploration, frustration, defiance and unrealized dreams. Drawings will be grouped according to these issues. Developed by Lloyd DeWitt, curator of European Art at the AGO, and David Wistow, interpretive planner, Michelangelo: Quest for Genius will feature computer animations that bring to life some of Michelangelo’s most ambitious and ultimately unfinished designs.

“This exhibition offers a direct and personal encounter with extraordinarily rare works that almost never travel by this great artist’s own hands,” said DeWitt. “We are thrilled and honoured to work with the Casa Buonarroti to bring these precious works on paper to Canada and to tell the real story behind their making, debunking the myth that genius is easy and great work untroubled. What they tell us about the motivations of a genius and the creative process is incredibly revealing.”

“The drawings are an inspiration. Creativity is a basic human activity,” said Wistow. “No matter what our background we can relate to the blood, sweat and tears behind Michelangelo’s masterpieces.”
The exhibition also examines the significant influence that Michelangelo had four centuries later on the French sculptor Auguste Rodin (b. 1840). For Rodin, whose greatest works were routinely rejected by the press and public alike, Michelangelo represented a spiritual and artistic father figure. Rodin was 36 when he produced his first major sculpture, inspired by Michelangelo’s evocative and emotional presentation of the human body. Nine sculptures from the AGO’s collection will be on display, including representative works from the Burghers of Calais(1884-1917) and his final commission, the work for which he suffered the most criticism, Balzac (1898).
Posted by Jonathan Kantrowitz at 9:07 AM