Realms of Imagination. Albrecht Altdorfer and the Expressivity of Art around 1500


“Realms of Imagination. Albrecht Altdorfer and the Expressivity of Art around 1500”, taking place from 5 November 2014 to 8 February 2015, the Städel Museum is shedding light on far- reaching innovations that came about in the early sixteenth century in the art of Europe, which took on a surprisingly modern appearance as a result. With the aid of 120 objects, the show vividly conveys how, around 1500, an entire generation of artists formulated the genres of landscape and history painting as well as the portrait anew.

Far removed from naturalistic representation, an innovative, expressive interplay of light effects, exuberant colouration and grotesque forms and poses evolved throughout the spectrum of artistic media: painting, sculpture, printmaking, drawing and book illumination. Taking the artists Albrecht Altdorfer (ca. 1480–1538), Wolf Huber (ca. 1485–1553), the Master IP of Passau (active until after 1520) and Hans Leinberger (documented in Landshut, 1510–1530) as a point of departure, the phenomenon of “expressivity” – a chief pursuit of the artists of the so-called Danube School – will here be placed in a pan-European context for the first time.

To this end, the works by Altdorfer, Huber, Leinberger and the Master IP are juxtaposed with examples by contemporaries such as Lucas Cranach the Elder (1472–1553), Hans Leu (ca. 1490–1531) or Albrecht Dürer (1471–1528). The exhibition emphasizes the importance of examining their œuvres within a broader European reference framework, because not only the artists in the Danube valley but also their colleagues in the Netherlands, on the Lower and Upper Rhine, in Switzerland and Upper Italy, Bohemia, Poland and Northern Germany availed themselves of a directly comparable pictorial and formal language. The Frankfurt show demonstrates this phenomenon to its visitors in a range of media and themes whose breadth is unprecedented in the history of exhibitions on this subject.

“Realms of Imagination” is the outcome of a joint exhibition project of the Städel Museum and the Liebieghaus Skulpturensammlung in Frankfurt am Main and the Kunsthistorisches Museum in Vienna in cooperation with the Geisteswissenschaftliches Zentrum Geschichte und Kultur Ostmitteleuropas e.V. of the Universität Leipzig.

After its presentation at the Städel, the show will be on view at the Kunsthistorisches Museum in Vienna from 17 March to 14 June 2015.

It has been nearly fifty years since the last comprehensive presentation of the art of the “Danube School”, and thirty years since the last major thematic show on Altdorfer. Now, with a selection of striking masterworks, the special exhibition at the Städel Museum is illuminating the phenomenon of expressivity in the art around 1500 in all its thematic and artistic facets and media in a panoramic survey of this stylistic development, which was not confined solely to the Danube region. Particularly in the area of religious depictions, the approaching Reformation granted artists of the time entirely new expressive liberties. They would not enjoy this freedom for long, however, because once the process of confessionalization was over the Protestant faith renounced certain images entirely, while the Catholic Church returned to a policy of insisting on iconographic conventions. As a result, in the art around 1500 we encounter narrative strains that were no longer conceivable in the same form in the further course of the sixteenth century.

The exhibition assembles and deliberately juxtaposes all of the artistic genres prevalent and displaying expressive tendencies in the period around 1500. Within this context, paintings and prints from the Städel collection as well as sculptures from the Liebieghaus Skulpturensammlung form the show’s core, which is enhanced with prominent loans from other museums. Key works from the Kunsthistorisches Museum in Vienna, the Alte Pinakothek and the Bayerisches Nationalmuseum in Munich, the Národni Galerie in Prague, the Skulpturensammlung and Gemäldegalerie of the Staatliche Museen Preussischer Kulturbesitz in Berlin, the Graphische Sammlung of the Universitätsbibliothek Erlangen, the Museo Thyssen- Bornemisza in Madrid, the Szépművészeti Múzeum in Budapest and other collections will be on view. We moreover succeeded in obtaining a substantial number of loans belonging to churches, for example the Retable of St John from the Church of Our Lady before Týn in Prague (1520s) and paintings from St Florian’s Priory in Linz. With this presentation, the Städel is continuing its series of major exhibitions on art of the Early Modern era, of which the most recent example was the show on Albrecht Dürer.

The exhibition is divided thematically into six parts.

The introductory section, entitled Weight of the World, Forces of Nature: Depictions of St Christopher, is devoted to one of the most frequently portrayed saints in the Late Middle Ages. Images of St Christopher, who carries the Christ Child across a river on his shoulders, not only decorated church walls and altarpieces in the form of paintings or sculptures, but were also very popular as prints used in domestic settings. Albrecht Altdorfer, Wolf Huber and Georg Lemberger depicted the saint in a previously unheard-of manner, employing bizarrely exaggerated forms to lend expression to the tremendous burden Christopher took upon himself when he carried the Child.

In the first gallery of the exhibition annex, the four leading artists of the Danube region are introduced with a selection of key works: Albrecht Altdorfer, Wolf Huber and the sculptors Meister IP and Hans Leinberger. Here the focus is on Images of Man. On the one hand, the objects on display shed light on how these masters differed from the preceding generation of artists in the depiction of the human being; on the other hand attention is called to stylistic devices they employed in the realization of this pictorial motif. Albrecht Dürer, as the protagonist and originator of a mathematically and scientifically constructed image of the human being, is moreover juxtaposed here with his contemporaries Altdorfer, Huber, Master IP and Leinberger.

In contrast to Dürer’s precisely proportioned bodies, the figures in the works of the other artists are extremely dynamic, and their anatomy is often depicted in a manner that is anything but realistic. The art of the Danube masters is distinguished by the employment of expressive colour and form. With works by Wolf Huber such as his painting 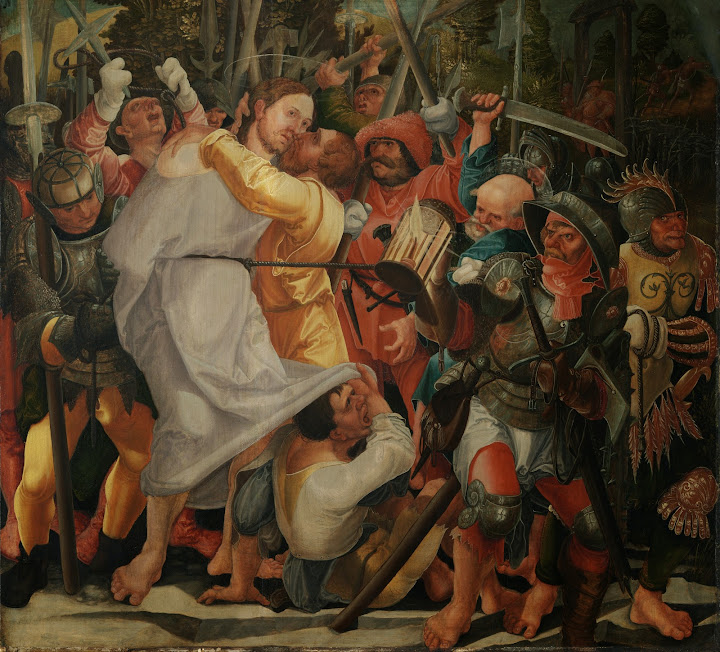 The Arrest of Christ (after 1522) or his Altarpiece of St Anne (1521), the second leading artist of the Danube region after Altdorfer is presented. What is more, in addition to Hans Leinberger, the monogrammist IP is featured here – with the central panel of his 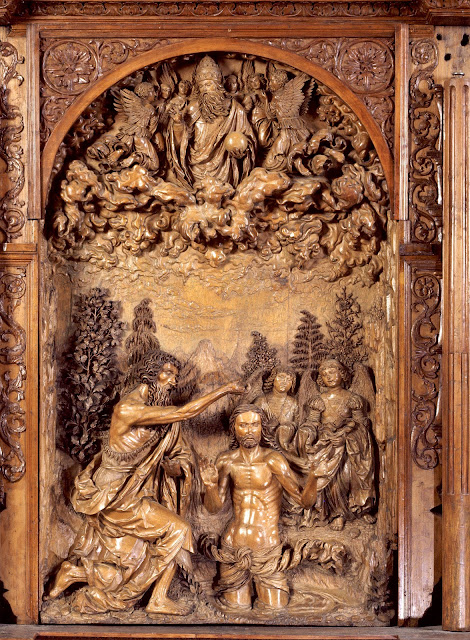 – as one of the most prominent representatives of sixteenth-century sculpture.

In the section Oblique Views in Crucifixions and Other Passion Scenes, the expressivity of the art of this epoch is examined with the aid of various religious motifs. Within the œuvres of Altdorfer, Huber, the Master IP and Leinberger, expressive means such as ornamentalization, dramatization and distortion are encountered in particularly striking form in depictions of the Crucifixion and the Deposition. A Crucifixion scene known as the so-called Schottenkreuzigung (ca. 1500) serves to introduce a further artist active in the Danube region in the early sixteenth century: Lucas Cranach the Elder; it is his first painting. The depiction of the theme by Cranach contrasts with other interpretations of the motif particularly by virtue of its drastic character.

The positioning of the crosses at oblique angles would later be adopted frequently by other artists. Leinberger unites all these various phenomena in his low reliefs of the Crucifixion, the Deposition and the Lamentation of Christ (ca. 1515/16). The Master IP is represented in this section with a Crucifixion group in the round, part of the Retable of St John from the Church of Our Lady beforeTýn (1520s). Huber, in his Large landscape with a city (ca. 1525) relegates the actual pictorial theme of the Crucifixion to the background, giving the landscape centre stage instead.

The section with the heading Landscape as a Vehicle of Expression features striking examples of how, in art around 1500, landscape and its components no longer serve as mere backdrops for the actual event, but – for the first time – become a pictorial subject and a theme in their own right. Skies threatening to erupt in storm or lyrical sunsets underscore the expressivity and moods of scenes usually devoid of people, and in many artworks the vegetation develops a mysterious life of its own. Pen-and-ink drawings by Albrecht Altdorfer and his younger brother Erhard, for example, show willows and spruces not as static trees but as eerily animated beings:

The following section, Means of Expressivity, is devoted to examining the various expressive devices employed in the art of the period in question. With the aid of deliberate contortion, deformation, ornamentalization and dramatization, as well as with draughtsmanship, the treatment of light, colouration and pathos, the artists undermined traditional visual expectations and presented the depicted figures in a new, astonishing, and often downright modern manner. In his painting The Birth of Christ (ca. 1511), for example, Altdorfer achieves an extreme intensification of the scene’s impact with his use of colour and his handling of the light:

The figure of an Abbot Saint (ca. 1520/30) by a Lower Bavarian artist is distinguished by tremendous distortion and deformation. The new generation of artists conceived of the human body virtually as a malleable material which could be modelled at will, regardless of established ideals.

The exhibition comes to a close with the topic Artists and Their Clients. Here we take a look at the role played in the development of the new style by the persons who commissioned the artworks. The Prayer Book of Emperor Maximilian I (1514/15) from the Bibliothèque Municipale in Besançon once again shifts the focus to the importance of Dürer and his function as an authority to be resisted, but also as a source of inspiration and point of departure for the exponents of the new approach. Recent findings in connection with the financers and clients of large sculptural ensembles of the altarpieces and epitaphs executed above all for Bohemian churches moreover shed light on the special production conditions and mechanisms of what in many cases were monumental commissions.

The themes explored and the insights gained within the framework of the show offer a fresh and comprehensive look at the unique phenomenon of expressivity in art around 1500.

Master IP (operative till after 1520), Epitaph Altarpiece, Central panel with Christ as the Redeemer from Death and the presumed Patron Stephan Schlick, after 1526 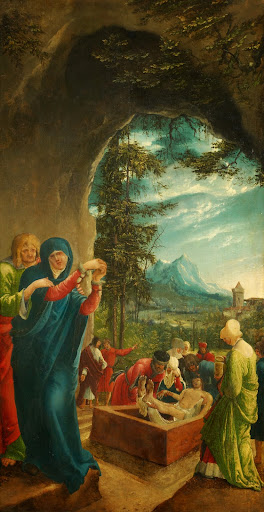 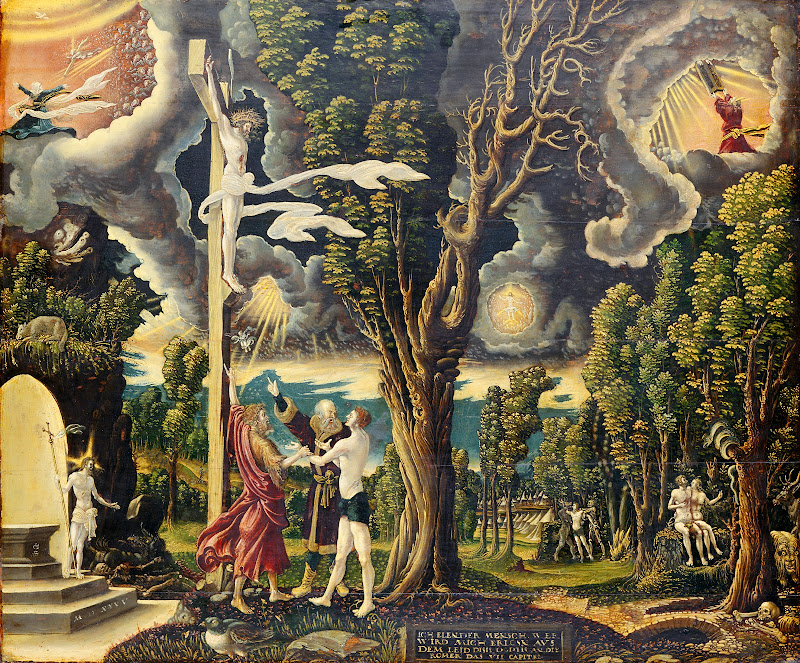 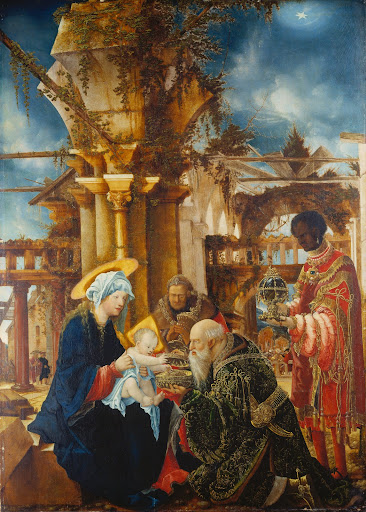 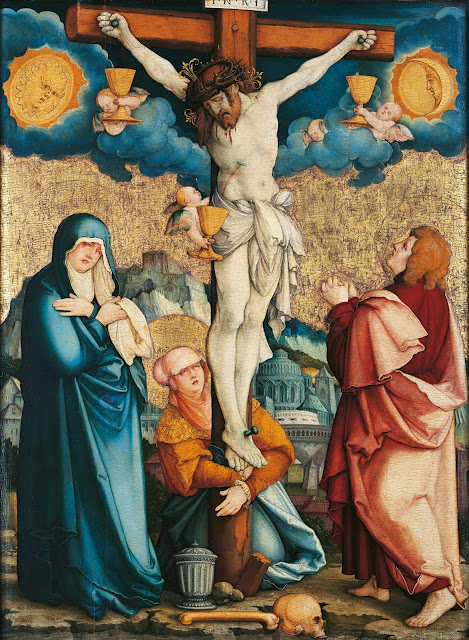 Posted by Jonathan Kantrowitz at 7:43 AM