London Painters brings together works by a small group of artists who have commonly been identified as the main proponents of the so-called “School of London”: Michael Andrews, Frank Auerbach, Francis Bacon, Lucian Freud, David Hockney, R.B. Kitaj and Leon Kossoff. Through a selection of self-portraits, depictions of their loyal, sometimes shared sitters and London scenes, the show explores the artists’ dedication to the figure and cityscape, at a time when abstraction prevailed. This is the first exhibition dedicated to this group in New York.

“The story of the supposed School of London is a story of friendships, an intimate tale. With that in mind, London Painters unites pictures that highlight these relationships and the circles of shared acquaintance, as well as London itself, the city that provided such a thrilling backdrop to so much of their development,” says Pilar Ordovas, founder of the gallery. “It feels fitting to bring London to New York for my third exhibition in the city, to celebrate the work of artists that have defined much of what I do.”


Powerfully evoking the early days of the British post-war period is Francis Bacon’s ‘Fury’, circa 1944, which relates to

Three Studies for Figures at the Base of a Crucifixion from the same year – the first Bacon painting in the Tate’s collection and the first to garner critical attention for the artist – the fervent orange background and screeching creature speak of the horrors that remained after the Second World War. 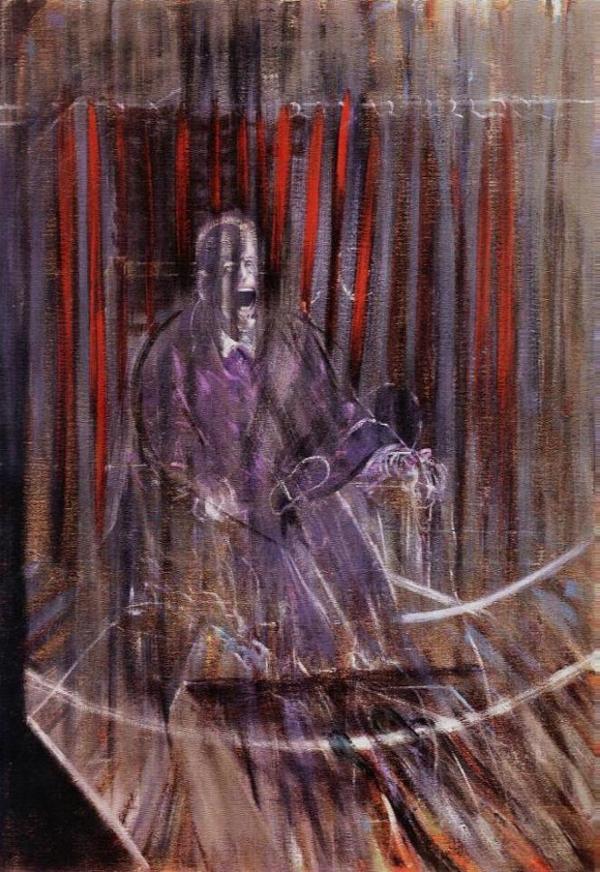 Painted just a few years later, in 1950, ‘Study after Velázquez’ is a variation on

Velázquez’s magnificent portrait of Pope Innocent X and one of the first Popes that Bacon ever made. Bacon’s subject appears to be metamorphosing into a secular figure, having lost most of the purple from his cape and depicted without a papal cap.

Bacon was a regular at Wheeler’s and the Colony Club in Soho, as were Frank Auerbach and Leon Kossoff, who met as students in the late 1940s. As well as sharing a long friendship and a sculptural way of applying oil paint, in the early 1950s, Auerbach moved into his current Camden studio, formerly Kossoff’s. It was here that Juliet Yardley Mills, the subject of

Head of J.Y.M., came to sit for Auerbach each Sunday and Wednesday for forty years.


In a sense, Auerbach and Kossoff are the most literal members of the ‘School’, using the cityscape as their devout subject.

are intimate portraits of their familiar city.

Over the years, this small group came to share a number of friends and acquaintances. Jane, Lady Willoughby de Eresby, was a great friend to Michael Andrews and to Lucian Freud.

Andrews’ Portrait of Jane, 1989-91, is one of very few portraits that the artist (who is buried on her estate in Scotland) painted. 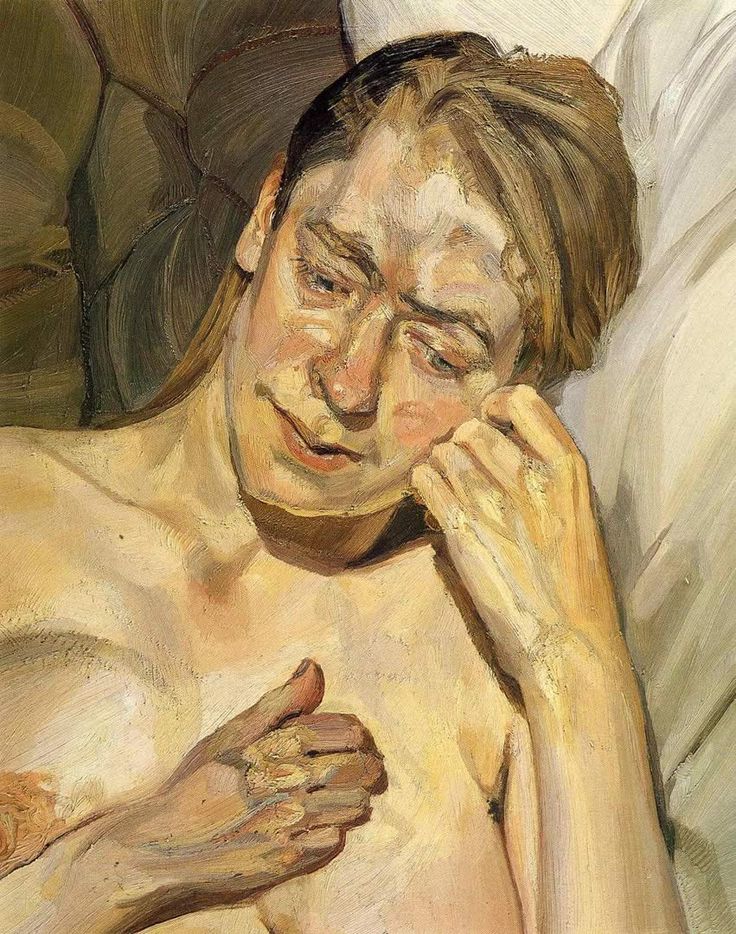 Freud’s depiction of Jane, Woman with Fair Hair – Portrait II, shows her as more youthful, set against a dark background. 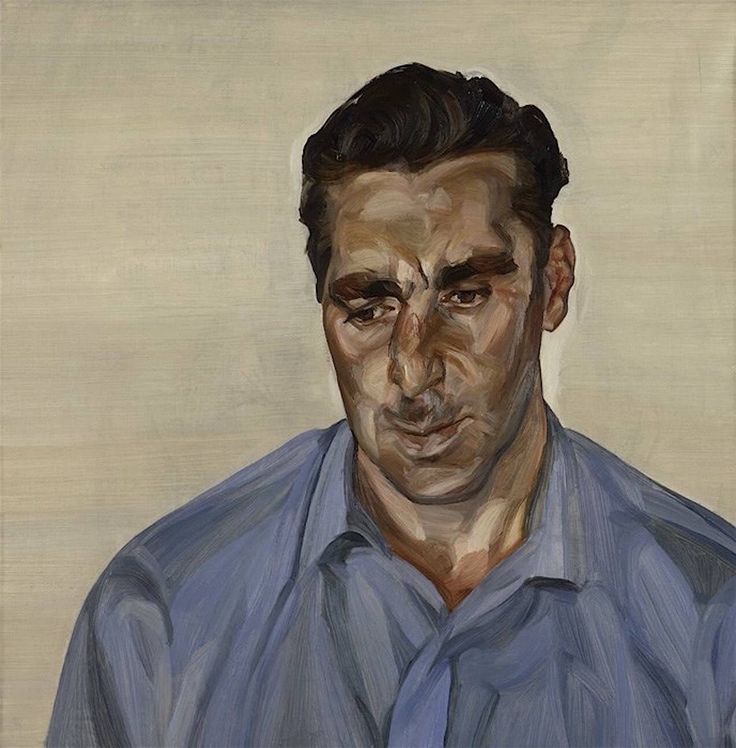 Man in a Blue Shirt, 1965, is one of two portraits Freud made of Bacon’s partner, George Dyer. This painting was in fact painted on Lady Willoughby’s estate – a striking testament to the intermingled lives of this group of artists and their loyal sitters.

It was R.B. Kitaj who promoted the notion of a “School of London” when he organized

The Human Clay, at The Hayward Gallery, London in 1976. This show was filled with works by the artists exhibited here, and a few years later, when Kitaj married Sandra Fisher, Auerbach, Freud and Kossoff were part of his minyan – the ten Jewish men that accompany the groom. Kitaj was friends them all and they often ate together at his home, surrounded by their paintings. The Neo-Cubist, 1976-1987, is a portrait of Kitaj’s oldest and closest friend, whom he met in his first year at the Royal College of Art – David Hockney. This painting started with a photograph of the blond-haired, bespectacled student, standing fully nude except for two mismatched socks.
'
Represented here by an iconic Los Angeles pool painting, Hockney, although based in the United States during much of the period, was a close friend to the young Londoners.

The artists included in London Painters used paint not for the explosions of Abstract Expressionism, but rather to create a connection between artist and subject, to examine the emotions and internal struggles on both sides of the canvas. Nowhere is this more evident than in their self-portraits, including 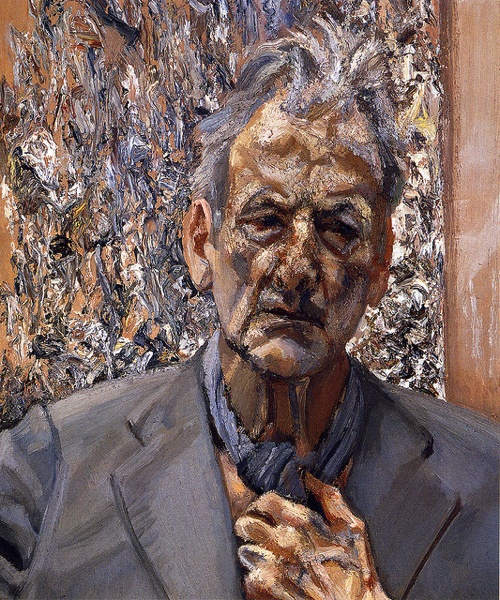 Freud’s Self-Portrait, executed in 2002, which has only once been exhibited, in the inaugural Met Breuer show, Unfinished: Thoughts Left Visible.

Posted by Jonathan Kantrowitz at 7:55 AM