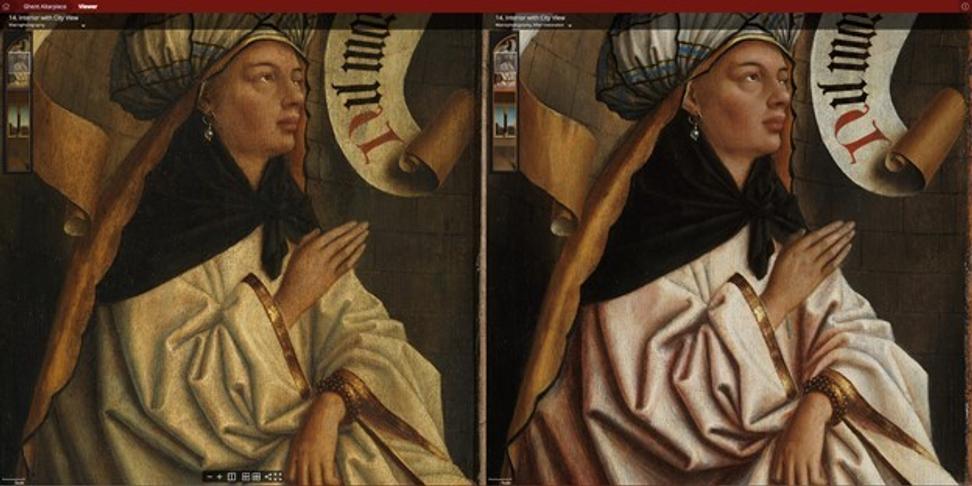 The Getty Foundation and the Royal Institute for Cultural Heritage (KIK-IRPA, Brussels) announced today the launch of major enhancements to the website ‘Closer to Van Eyck,’ which provides breathtaking details of one of the most important works of art in the world, the Ghent Altarpiece. Enhancements include new images of the work under various stages of conservation treatment, a larger range of technical images, and the ability to see and compare multiple views of the painting at the same time. 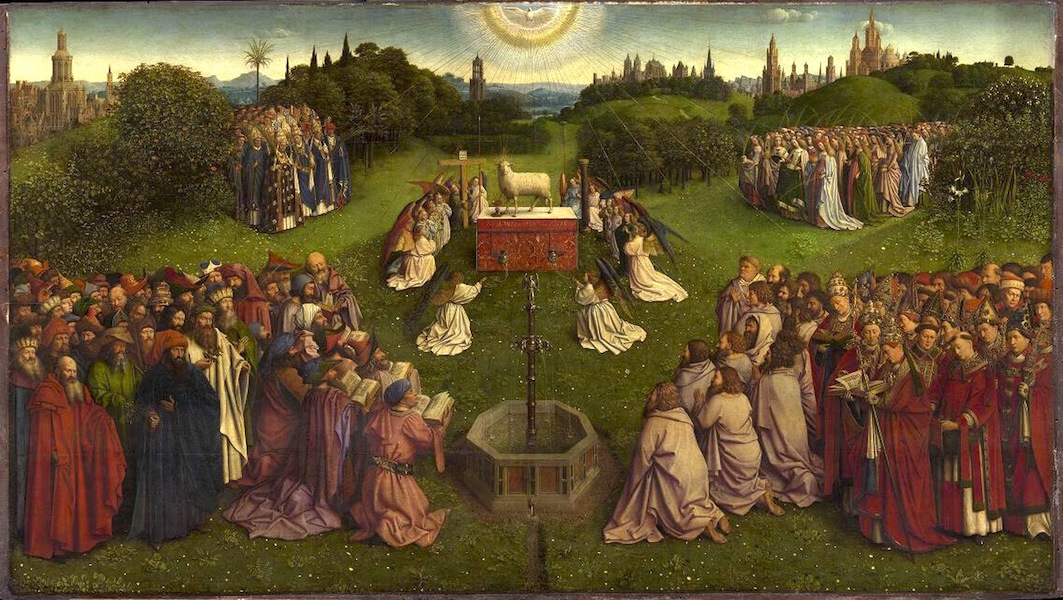 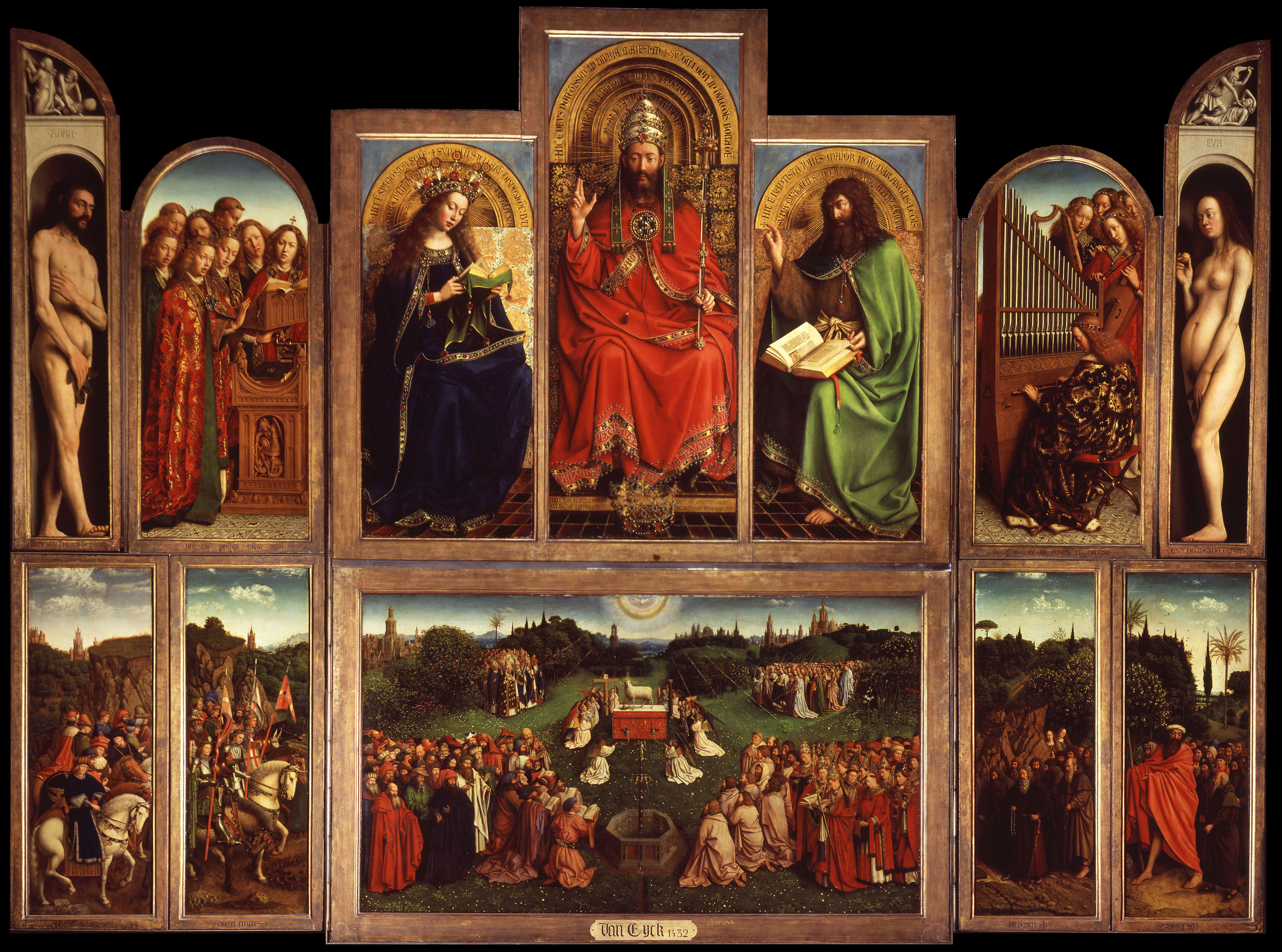 Located at St. Bavo’s cathedral in Ghent, Belgium, The Mystic Lamb of 1432 by Hubert and Jan van Eyck, also known as the Ghent Altarpiece, is a stunning and highly complex painting composed of separate oak panels. Since 2010, several Getty Foundation grants have supported the conservation planning, examination and training related to the altarpiece as part of its Panel Paintings Initiative. A collaboration among the Flemish government, the Royal Institute for Cultural Heritage and their partners led to the first much-needed conservation treatment of the work in 2010. The panels and frames of the closed altarpiece were treated between 2012 and 2016 and the large-scale campaign now continues with the panels of the lower register of the open altarpiece. The “Closer to Van Eyck” website launched in 2012, and had yet to receive major updates until now.

“The Getty Foundation is pleased to have supported the research and study that has led to the restoration of the Ghent Altarpiece currently underway,” says Deborah Marrow, director of the Getty Foundation. “The enhanced documentation now available through ‘Closer to Van Eyck’ brings even greater access to the genius of the artists that will both delight viewers and inspire new scholarship.”

The altarpiece was painstakingly recorded at every step of the conservation process through state-of-the-art photographic and scientific documentation. Thanks to the Royal Institute for Cultural Heritage’s imaging team, digital processing and design led by Frederik Temmermans of Universum Digitalis and the Vrije Universiteit Brussels, and imec’s Department of Electronics and Informatics, the altarpiece can now be viewed online in visible light, infrared, infrared reflectograph, and X-radiograph, with sharper and higher resolution images than ever before.

Visitors to the site can now also adjust a timeline to view key moments in the conservation process, and have access to simultaneous viewing of images before, during, and after conservation. Users can zoom in even closer on details of the painting, exploring microscopic views of the work in 100 billion pixels. A tour of the site can be taken here: http://closertovaneyck.kikirpa.be/ghentaltarpiece/#home/sub=sitetour

“We are proud and pleased to now also offer unparalleled access to the results of the first stage of the restoration of the Ghent Altarpiece,” says Dr. Ron Spronk, professor of Art History at the Department of Art History and Art Conservation at Queen’s University in Kingston, Ontario, Canada and Radboud University in Nijmegen, the Netherlands, who initiated and coordinated Closer to Van Eyck. “Our site provides images and research materials of unprecedented quality and scope, both on and below the paint surface that will serve both specialists and general audiences for many years to come. We truly have come much, much closer to Van Eyck.”

The conservation work also led to the discovery that around 70% of Van Eyck’s original paint layer on the panels of the closed altarpiece had been hidden beneath overpaint for centuries, requiring painstaking removal. The removal of this paint is reflected in the images seen online.

“We are convinced that through direct comparison of the closed ensemble or details before and after overpaint removal, art professionals and amateurs alike will be startled by the spectacular result of this intervention,” says Hilde De Clercq, director of the Royal Institute for Cultural Heritage. “From the strengthened sense of space and restored visual unity, to the remarkable lighting effects, this website truly offers a front row seat to view the world of Van Eyck.”

The website Closer to Van Eyck is the result of the close collaboration of numerous institutions and individuals. The full listing of participants can be found on the site, at: http://closertovaneyck.kikirpa.be/ghentaltarpiece/#home
Posted by Jonathan Kantrowitz at 12:27 PM