Christie’s The Art of the Surreal Evening Sale, 27 February 2019

Launching 20th Century at Christie’s on 27 February 2019, The Art of the Surreal sale will follow the Impressionist & Modern Art Evening Sale. This year’s 18th edition of Christie’s annual The Art of the Surreal auction includes Surrealist works spanning from 1890 to 1974, with 34 lots by 16 artists. The sale includes seven works by René Magritte, led by Le lieu commun (1964, Estimate on Request), one of the finest and largest examples of his iconic bowler-hatted men. Never-before seen at auction, the work offers a unique view of the wandering figure both full-face and hidden behind a column in an ambiguous landscape of either impossible or multiple reality. Six works by Max Ernst and four by Joan Miró are also offered, alongside a rare discovery by Salvador Dalí, one of the experimental works of Joan Miró’s ‘dream’ paintings, and a rediscovered, large and enigmatic work by Oscar Domínguez, unseen in public since its creation in 1934. The works from the sale will be exhibited in London from 21 to 27 February 2019, with 20th Century at Christie’s continuing until 7 March.

Olivier Camu, Deputy Chairman, Impressionist and Modern Art, Christie’s: “The 18th edition of our annual themed sale promises to be exciting, with newly discovered paintings by Dali and Dominguez, as well as Magritte’s masterpiece Le lieu commun. It’s an honour to present this work at auction for the first time. It is the most important and iconic representation of Magritte’s bowler-hatted man to be auctioned since the sale of Le fils de l’homme in 1998, which reached a phenomenal price at Christie’s New York. Formerly in the collection of Gustave Nellens, who received it from the artist, Le lieu commun is one of the eight largest paintings Magritte did in this hyper-realistic style of the bowler-hatted man, four of which are now in museums.”

Led by Le lieu commun, six additional works by René Magritte will be offered for sale. In La belle captive (1931, estimate: £2,000,000-3,000,000), René Magritte presents, for the very first time, the image of a painted canvas standing on an easel, depicting the exact same scene that its presence within the picture seems to obscure. This was to become a familiar device for the rest of his career. 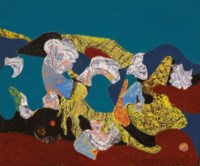 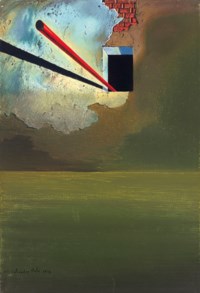 Recently discovered, Sans titre (1932, estimate: £1,000,000-1,500,000) is a microscopically detailed painting from 1932, which introduces one of Salvador Dalí’s most frequently rendered obsessions of the early 1930s. It depicts a red pole, possibly a staff or a fisherman’s mast, protruding from the small, rectangular window of a Catalan fisherman’s shack similar to the one in Port Lligat where, in 1930, Dalí and his new love Gala Eluard had chosen to live and embark upon their love affair. Appearing as opposites and yet unified, the pole and the window represent Dalí’s theory surrounding the physical characteristics of objects, here conjoined in a way that symbolises the sense of surprise and co-dependence that he found with Gala. 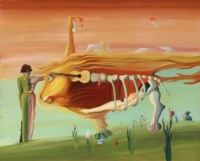 Oscar Domínguez’s absorbing and enigmatic painting Violette Nozières (Elle rêve) (1934, estimate: £600,000-900,000) is an exciting discovery, which was only previously known from a small black and white photograph. It was purchased directly from the artist shortly after its creation and has remained in the same family collection ever since. Among the artist’s rare early surrealist masterpieces, the large composition is imbued with the raw sexuality and violence so characteristic of Domínguez’s oeuvre, combining elements of semi-automatism with precisely rendered details and figures to create a powerfully fantastical, dream-like image, where every element goes through a metamorphic process in front of our eyes. At the heart of the composition, a majestic lion boldly stares down the shadowy faceless figure of a soldier, who raises his arm as if to shoot at the defenceless young woman that lies in the beast’s stomach. While for the most part its symbolism remains determinedly elusive, Violette Nozières (Elle rêve) draws inspiration from the notorious scandal of the same name, which had gripped France throughout 1933 and 1934:  Violette Nozière’s poisoning of both her parents, followed by her attempt to disguise it as an apparent double suicide. Filled with a seemingly endless array of mysterious vignettes and symbols, connected through oblique visual hints, Violette Nozières (Elle rêve) is a surrealist tour-de-force that captures the potency of Domínguez’s unique creative vision. 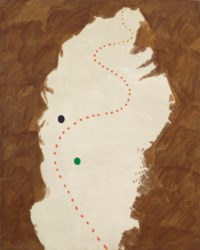 Peinture (1927, estimate: £1,200,000-1,800,000) is one of the final and most experimental works of Joan Miró’s radical and much celebrated series of ‘oneiric’ or ‘dream’ paintings, which the artist began in Paris in 1925 at the height of his involvement with Surrealism. Personnage (1967, estimate: £300,000-400,000) is part of a pivotal series of painted bronze ‘Assemblage-Sculptures’ by the artist. In the late 1960s, Miró wholeheartedly embraced sculpture in his continuing quest to expand the limits of art, and, following an earlier suggestion by Alberto Giacometti, in 1967 fused his sculpture with painting by adding colour to these works.
Further artists representing the broad range and influence of the movement include Yves Tanguy, Alberto Giacometti, André Masson, Victor Brauner, Francis Picabia, Man Ray, Paul Delvaux, Antoni Tàpies, Jean Arp and finally two artists that were precursors to the movement, Giorgio de Chirico and James Ensor.
Posted by Jonathan Kantrowitz at 11:14 AM