The Fine Arts Museums of San Francisco and the Kimbell Art Museum have announced Monet: The Late Years, the first exhibition in more than 20 years dedicated to the final phase of Monet’s career. Through approximately 60 paintings, the exhibition will trace the evolution of Monet’s practice from 1913, when he embarked on a reinvention of his painting style that led to increasingly bold and abstract works, up to his death in 1926. 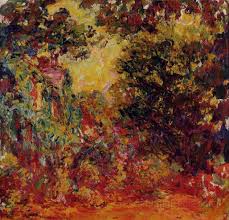 Image courtesy of the Fine Arts Museums of San Francisco

Assembled from major public and private collections in Europe, the United States, and Asia, including the holdings of the Fine Arts Museums and the Kimbell, Monet: The Late Years will include more than 20 examples of Monet’s beloved water lily paintings. In addition, the exhibition will showcase many other extraordinary and unfamiliar works from the artist’s final years, several of which will be seen for the first time in the United States.

Majestic panoramas will be displayed alongside late easel paintings, demonstrating Monet’s continued vitality and variety as a painter. This exhibition will redefine Monet—widely known as the greatest landscape painter of the Impressionists—as one of the most original artists of the modern age.

"Building on the strong history of partnership between our institutions, Monet: The Late Years was inspired by seminal paintings by Monet in the collections of the Fine Arts Museums of San Francisco and the Kimbell Art Museum,” said Eric M. Lee, director of the Kimbell, and Melissa Buron, director of the art division at the Fine Arts Museums of San Francisco. “Together, we are delighted to reveal a newly considered Monet in this thrilling exploration of his last works.”

Monet: The Late Years focuses on the period when the artist, his life marked by personal loss, deteriorating eyesight, and the threat of surrounding war, remained close to home to paint the varied elements of his garden at Giverny. His worsening vision and a new ambition to paint on a large scale stimulated fundamental changes in the tonality and intensity of his palette, toward vivid color combinations and broader, more apparent, application of paint. The complex surfaces of his canvases reveal layers of activity spread out over the course of days, months, and years. The result was a remarkable new body of work with increasingly feverish, dramatic brushwork. Far removed from his earlier, more representational production, the artist’s late paintings close in on a stylistic threshold into abstraction.

“The last dozen years of Monet’s life were a challenging time for the painter, who contended with personal loss and the afflictions of old age in his 70s and 80s,” said exhibition curator George T. M. Shackelford, deputy director of the Kimbell Art Museum. “But they were also among the most triumphant of his long career—because in his mid-70s, Monet decided to reinvent himself, mining his past, yet creating works that looked like nothing he had ever done before.”

Thematically arranged, the exhibition opens with a prologue concentrating on scenery from Monet’s outdoor studio at Giverny. Paintings from the late 1890s and early 1900s include depictions of the Japanese footbridge over the newly created lily pond, and the artist’s house as seen from the rose garden—all sources of inspiration that he would revisit in his late career.

Next, the exhibition enters the period between 1914 and 1919, when Monet returned to painting anew after a hiatus in work prompted by the loss of his second wife, Alice, and his eldest son, Jean.

Opening with the vibrant 1914–1917 Water Lilies from the Fine Arts Museums’ collection,  (above)the section features a number of the dynamically rendered water lily paintings from this period, juxtaposed with audacious large-scale floral studies from the evolving scenery of his garden.

Continuing to study natural phenomena, the artist focused on elements that had been relegated to the fringes in earlier works, such as Day Lilies, Agapanthus, and Yellow Iris, in addition to Water Lilies, among the 20 paintings on loan from the Musée Marmottan Monet, Paris.

Monet’s ambitions as a muralist, in contrast with his renewed activity as an easel painter, are explored next. With the completion of a vast studio building on his property in 1916, Monet was able to undertake significantly larger canvases, measuring between 14 and 20 feet wide, forming a series of mural-style paintings now known as the Grandes Décorations.

In such immersive, panoramic paintings as Agapanthus from the Saint Louis Art Museum, more than 6 x 14 feet in size—the artist paralleled themes undertaken in an important series of paintings of his water lily pond, each about 3 x 6 feet, their number rivaling the scale and ambition of his mural project.

Groups of paintings from his late garden series—several on view in the United States for the first time—conclude the exhibition. During his final years, while continuing to perfect his largest panels, Monet returned to working in smaller-format paintings, on the scale of his famous series paintings of the 1890s and early 1900s. Working again in his classic serial method, he revisited familiar motifs on his property, such as the Japanese bridge and the rose-covered trellises over the path leading from his house to the edge of his flower garden.

The exhibition showcases these works in greater numbers than ever before attempted: in addition to seven studies of the Japanese bridge at Giverny, six compelling portrayals of a tree with a twisting trunk and craggy outreaching branches are shown. Among these is Weeping Willow, a masterwork from the Kimbell Art Museum’s collection, painted in 1918–1919 in mournful response to the tragedies of World War I.

By his final years, Monet’s cataracts had affected the tonal balance of his perception. Nonetheless, as seen in 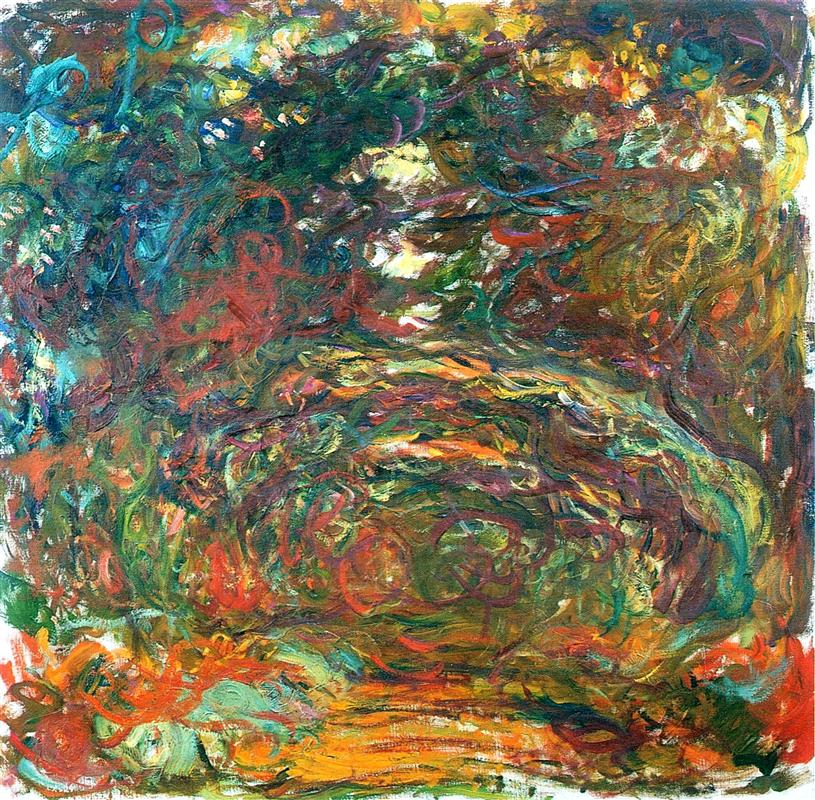 Path under the Rose Arches and The Artist’s House Seen from the Rose Garden, (above) both on loan from the Musée Marmottan Monet, the artist triumphed over this adversity by producing his most radical works yet. The expressive style of these paintings, with a complex layering of gestural strokes in red and yellow hues over blue and green, affirms Monet’s continued vitality as a painter and redefines him, in the near abandonment of subject matter in favor of increasingly rapturous execution, as a pioneer of abstraction.

Monet: The Late Years is a sequel to Monet: The Early Years, which focused on the artist’s youthful pre-Impressionist years—from ages 17 to 31—when he developed his unique visual language and technique, on view in Fort Worth and San Francisco in 2017.

Organized by George T. M. Shackelford, deputy director of the Kimbell Art Museum, and installed in San Francisco by Melissa Buron, director of the art division at the Fine Arts Museums. Monet: The Late Yearsis on view at the de Young museum from February 16 through May 27, 2019, and then at the Kimbell Art Museum from June 16 through September 15, 2019. 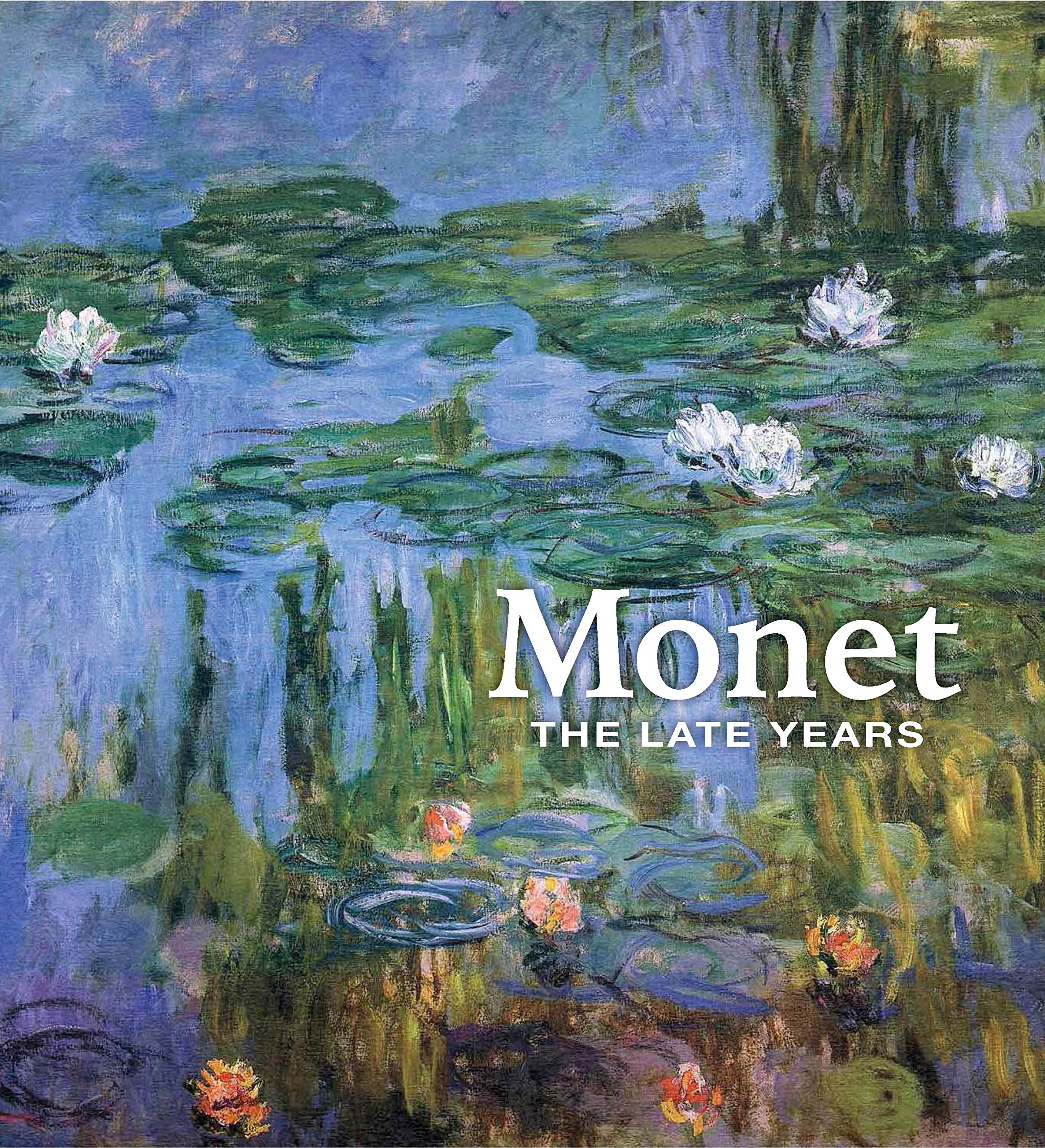 This beautiful publication examines the last phase of Monet’s career, beginning in 1913, bringing together approximately 60 of his greatest works from this period. More specifically, Monet: The Late Years focuses on the series that Monet invented and reinvented at Giverny, reevaluating many large-scale works that have long been considered preparatory studies, reexamining their relationship to and status as finished works. Essays by a roster of distinguished scholars address topics such as Monet’s plans for displaying his late paintings, the mechanics of his painting technique, and the critical and market reception of these works. Through this visually stunning reassessment, Monet’s late works, still astonishing a century later, recast the titan of Impressionism as a radical modern painter.


Posted by Jonathan Kantrowitz at 8:03 AM