As resurgent interest in Sir Lawrence Alma-Tadema (British, born Netherlands 1836–1912) raises appreciation and interest in his work for a new generation, the Clark Art Institute offers new insight into one of the painter’s most successful and distinctive artistic endeavors—the design of a music room for the New York mansion of financier, art collector, and philanthropist Henry Gurdon Marquand (1819–1902).

Orchestrating Elegance: Alma-Tadema and Design reunites twelve of nineteen pieces from the original furniture suite, along with paintings, ceramics, textiles, and sculpture from the room for the first time since Marquand’s estate was auctioned in 1903. The Clark’s ornately decorated Steinway piano, acquired in 1997, is the centerpiece of the exhibition.

On view June 4–September 4, 2017, the exhibition examines the music room and its objects from a number of perspectives, including how the commission unfolded and why Alma-Tadema was chosen to design the interior in a Greco-Pompeian style; the contributions of other artists, such as Frederic, Lord Leighton (English, 1830–96) and Sir Edward Poynter (English, 1836–1919); the aesthetic impact of the finished furniture and room; and the history of the piano. In addition to objects from the original music room, the exhibition includes paintings, preparatory drawings, books, and photographs that provide background and context for the project.

“Exhibition co-curators Kathleen Morris and Alexis Goodin have brought back to life one of the great interiors of Gilded Age New York,” said Olivier Meslay, Felda and Dena Hardymon Director of the Clark. “We look forward to giving our visitors the experience of stepping back in time to marvel at one of the most extraordinary artistic collaborations of the late nineteenth century.”

Henry Marquand was one of the founders of The Metropolitan Museum of Art and acted as its second president. He donated many works of art to the Met during his life, often buying specifically for that purpose.

The Met’s imposing portrait of Marquand by John Singer Sargent (American, 1856–1925), which affirmed the sitter as a prominent member of late-nineteenth century New York society, is featured in the Clark’s exhibition. Marquand’s collections filled his house, which included a series of rooms dedicated to separate artistic cultures or styles, each featuring interiors designed by leading artists and craftsmen to complement displays of original works of art.

“Tracking down the location of all of these objects, and researching their fascinating histories, has been immensely exciting and rewarding,” said Kathleen M. Morris, exhibition co-curator and Sylvia and Leonard Marx Director of Exhibitions and Curator of Decorative Arts. “We found a pair of original portieres, or door curtains, from the suite in a private collection and developed a close friendship with the owner, Brian Coleman. We were thrilled when he donated them to the Clark in 2015. These portieres have added enormously to our knowledge of how the original suite looked, as the rest of the furniture has lost its original upholstery.” These original textiles helped Morris and co-curator Alexis Goodin, curatorial research associate, recreate the original upholstery of the Clark’s piano stools in collaboration with noted weaver Rabbit Goody of Thistle Hill Weavers, embroiderer Elizabeth Creeden of Wellingsly Studio, and upholsterer Elizabeth Lahikainen, who specializes in historical furniture.

The conservation projects undertaken in advance of the exhibition also included the recreation of missing “HMG” monograms originally inlaid on both sides of each piano stool. “Equaling the high caliber craftsmanship of the original wasn’t easy or quick to accomplish, but the furniture conservator, artist, and wood turner we worked with rose to the challenge on this project. They expertly recreated the inlay that has long been missing from the stools, returning these pieces to their original aesthetic,” noted Goodin. The conservation projects are highlighted in the final gallery of the exhibition.

The Marquand mansion was designed by architect Richard Morris Hunt (1827–1895) and completed in 1884. When Marquand commissioned Alma-Tadema, the London-based artist was well established as the premier painter of classical antiquity. Orchestrating Elegance includes several paintings that helped build this reputation: 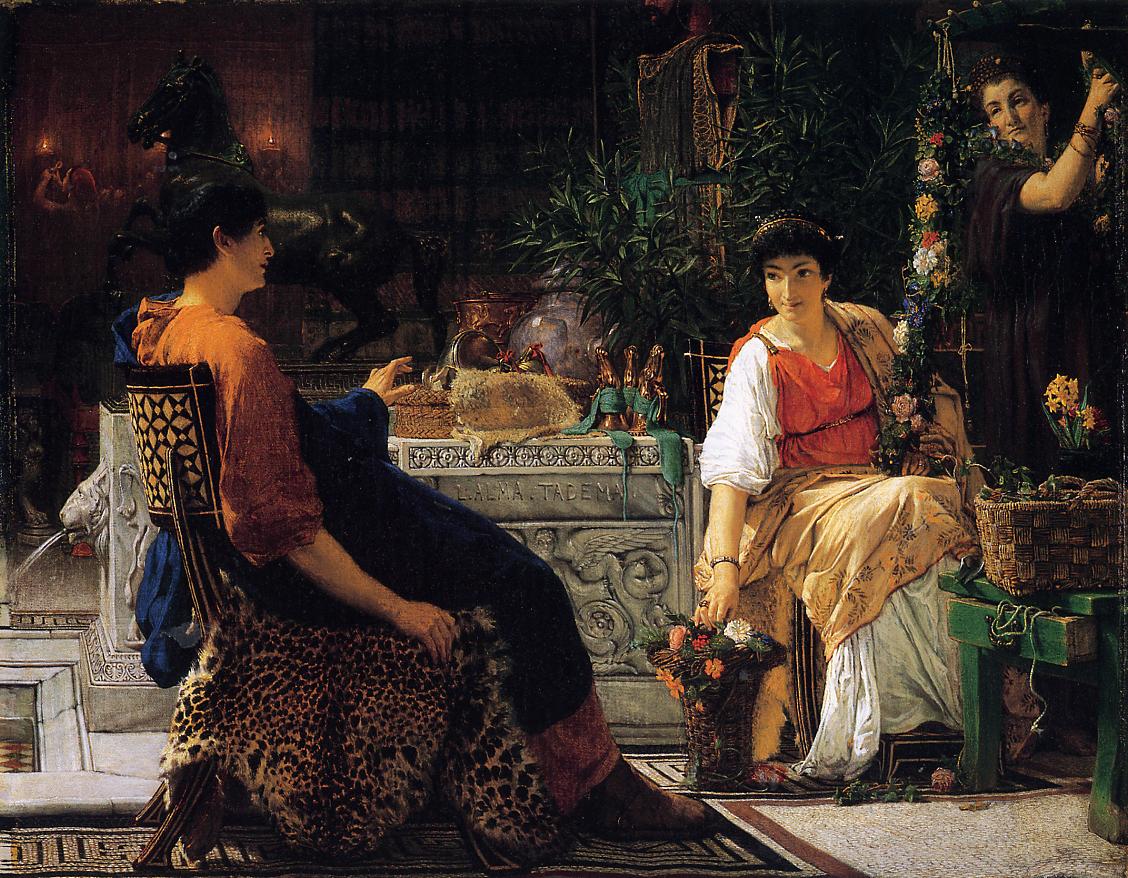 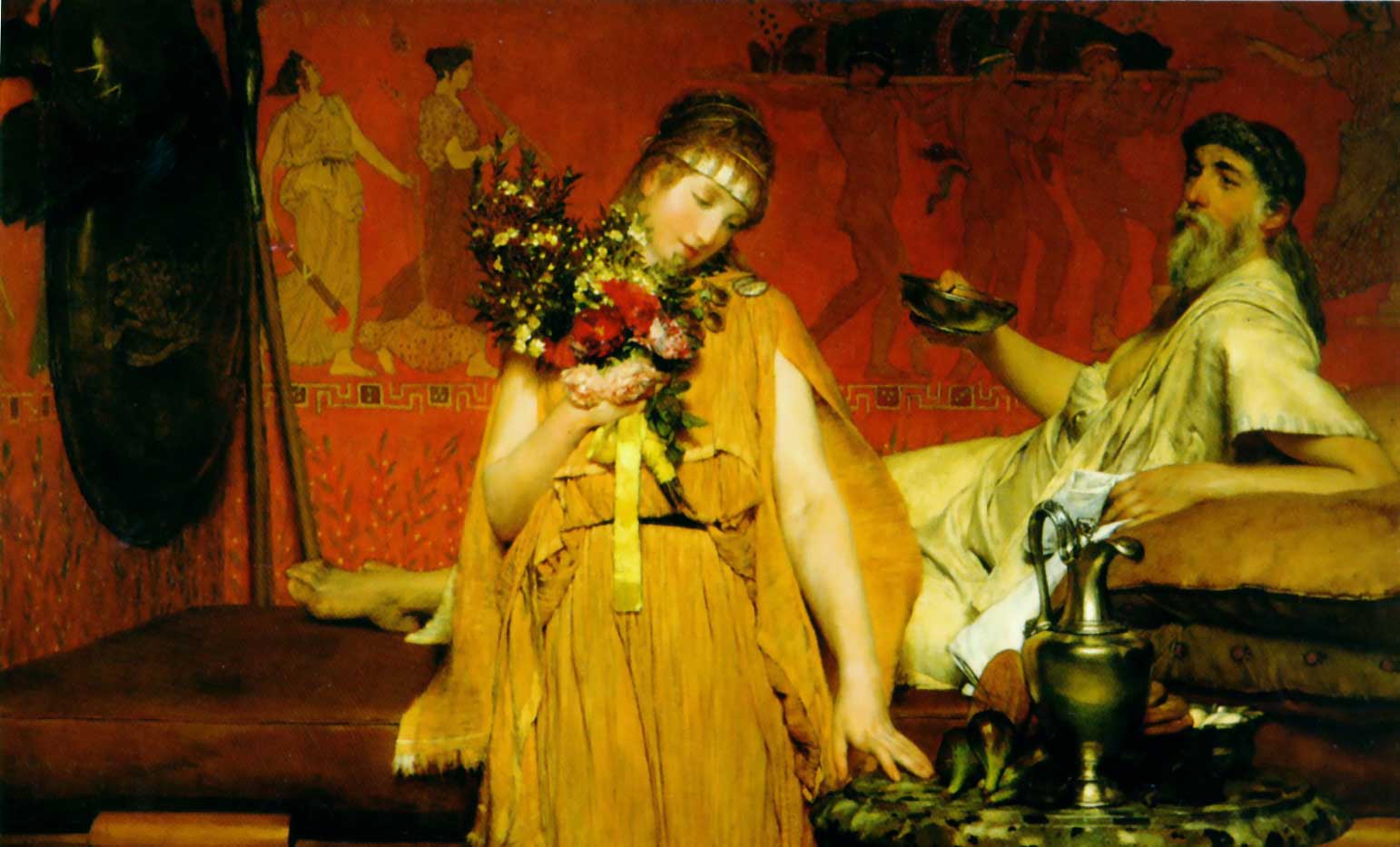 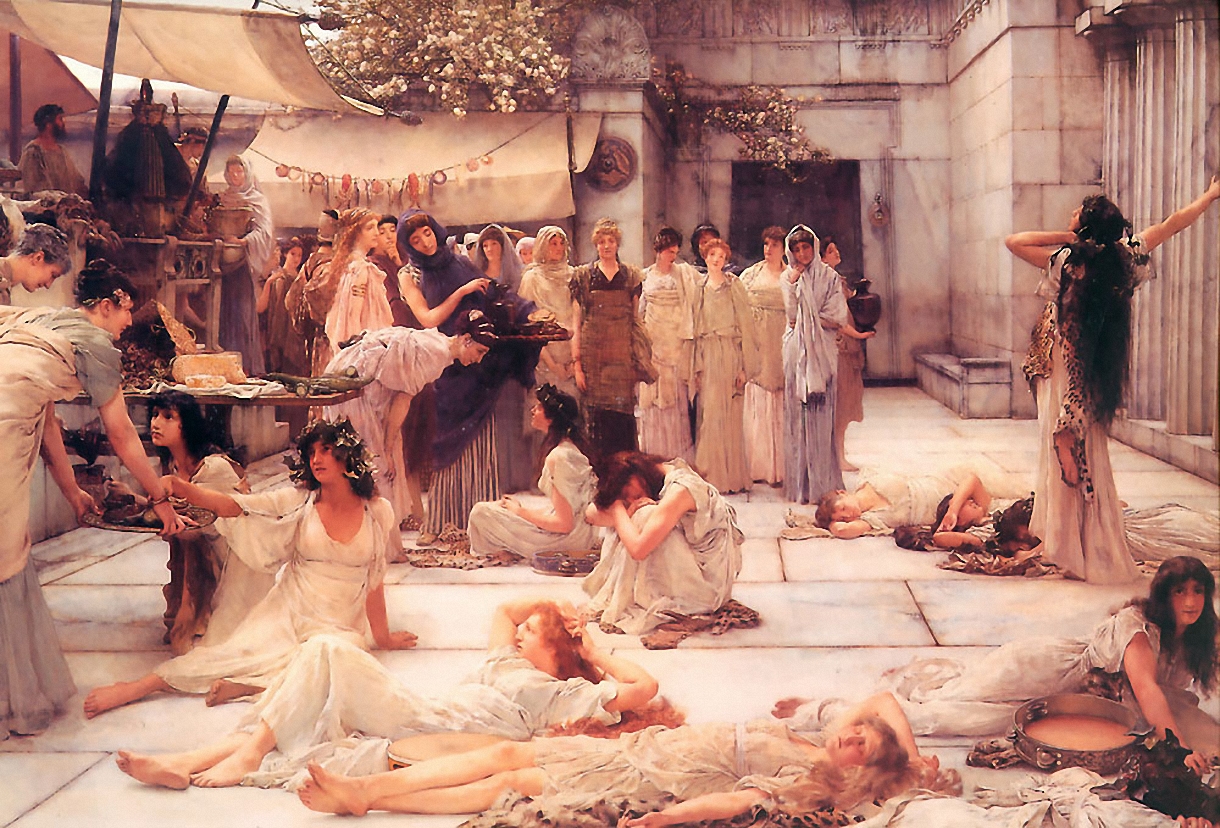 In addition, preparatory sketches and related drawings and photographs demonstrate his ability as a draftsman and his approach to incorporating ancient references in his works. Alma-Tadema’s skill as a designer of interiors was also well known at the time of the commission. He designed his own homes in London to showcase his extensive and eclectic collections, and these interiors were celebrated in many publications of the time. Marquand no doubt knew of these famous houses and made the decision to commission the artist to design the music room.

The music room acted as the Marquand mansion’s parlor and formed the social center of the residence. In it, Marquand displayed a portion of his famous collection of European paintings including two works by Alma-Tadema: 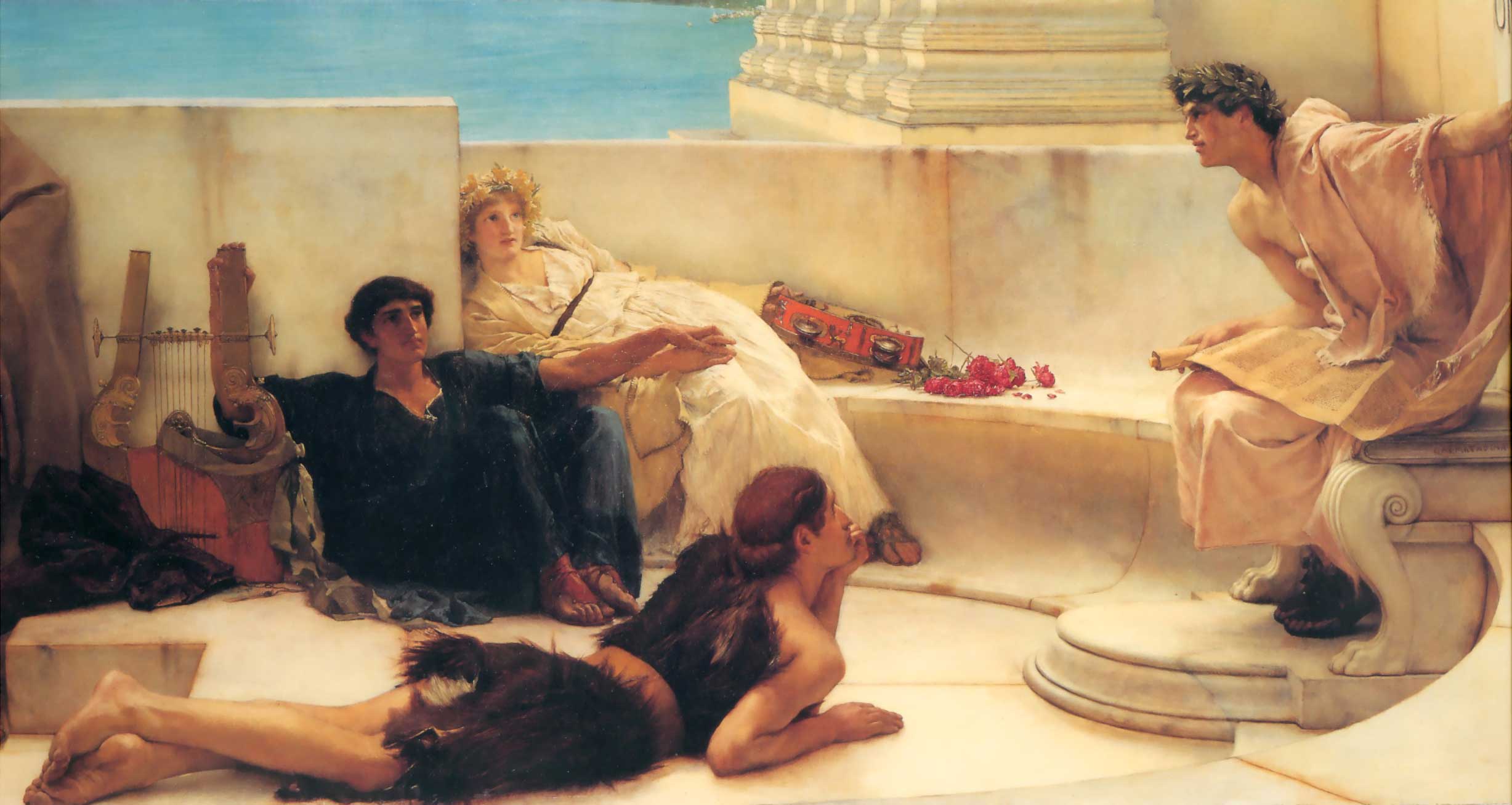 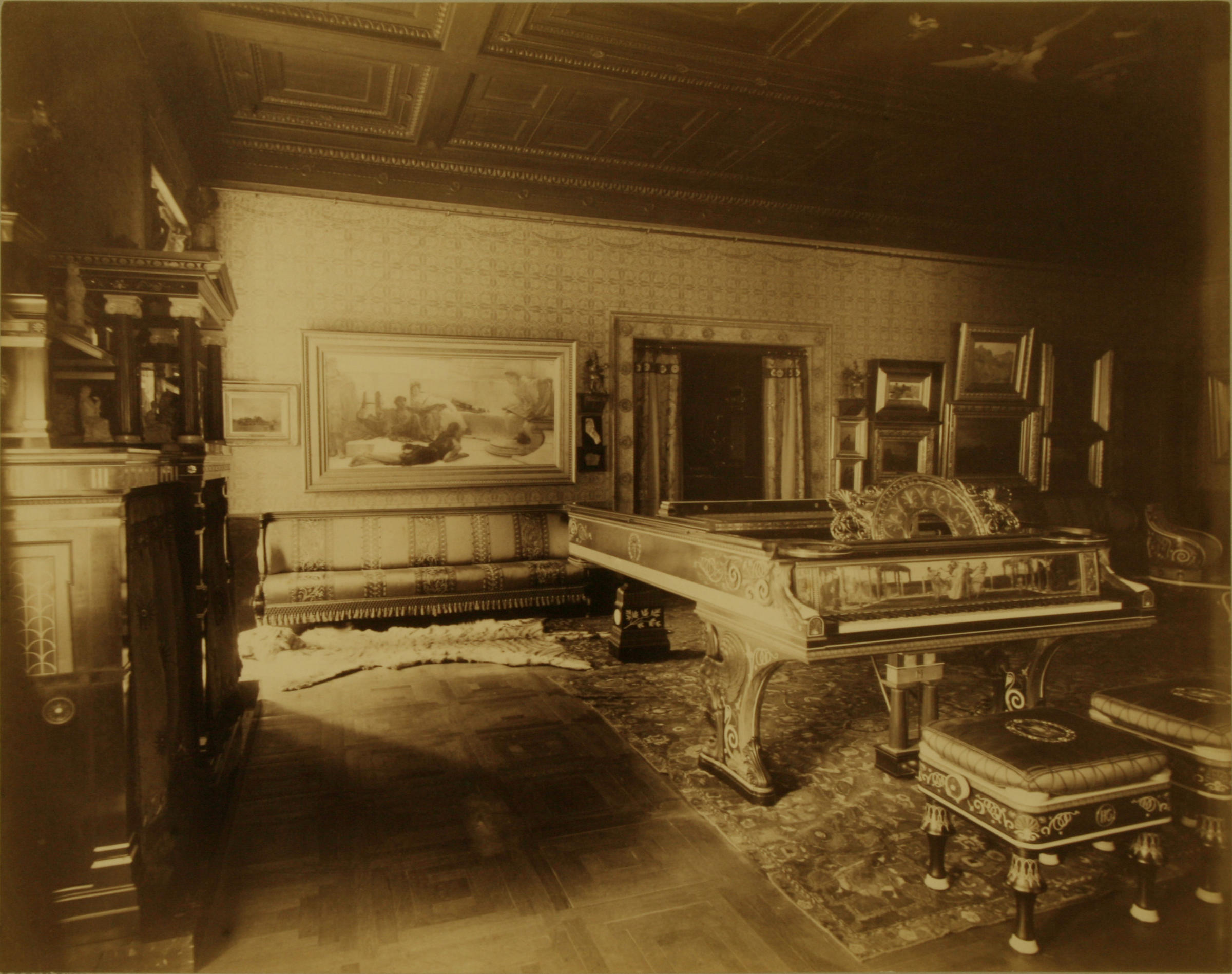 Marquand set no cost limit for the music room project, which was Alma-Tadema’s only commission of this type. The resulting furniture suite, extraordinary in every detail, created a sensation when it was displayed in London prior to shipment to New York. Acclaimed for its imaginative forms, the suite was painstakingly decorated with veneers of ebony and cedar accented with elaborately carved inlays of boxwood, ivory, abalone, and mother-of-pearl. Magazines and newspapers on both sides of the Atlantic featured extensive coverage of the furniture and the room, praising the design and craftsmanship, while marveling at the cost: an estimated $50,000 for the piano alone. When the Clark purchased the piano at auction in 1997 for $1.2 million, headlines across Europe and the United States once again touted the price paid for the piano, which was the most expensive sold at auction up to that time. That benchmark was eclipsed in 2000 when the piano John Lennon used to write Imagine sold for $2.1 million.

Specialist art and furniture periodicals as well as the popular press lauded the suite at the time it was made. The furniture was described in superlative terms—“magnificent,” “splendid,” “superb,” “exquisite,” “invaluable product of artistic genius,” “elaborate and beautiful,” “unique,” “remarkable alike in conception and execution.” In addition to the Clark’s piano and stools, Orchestrating Elegance includes a total of seven settees and chairs; a monumental music cabinet; and a circular onyx-top table from the celebrated suite, all gathered from public and private collections in the United States and Europe. The private collection objects have never before been exhibited outside of auction sales rooms.

Alma-Tadema commissioned other artists to contribute to the music room. Frederic, Lord Leighton created a triptych ceiling painting featuring a number of allegorical figures representing music, poetry, inspiration, and dance. Orchestrating Elegance presents three drawings of these panels that reveal the careful development process for which Leighton was famous. Edward Poynter was chosen by Alma-Tadema to paint the piano’s fallboard, resulting in one of the most celebrated components of the suite. Poynter, like Alma-Tadema and Leighton, was known for his subjects inspired by classical antiquity, and his precise and jewel-like painting style was ideally suited to the intimate proportions of the interior of the fallboard, visible when the keys are exposed.

When Johnstone, Norman & Co. obtained the Marquand music room commission in 1884, the company was well known among high-end London furniture manufacturers. The Marquand commission resulted in the most celebrated furniture ever made by the firm, raising its international reputation and stimulating overreaching ambitions that ultimately led to the company’s demise. Although the exact nature of Alma-Tadema’s relationship with the firm is unknown, it is likely that he used the company to manufacture furniture for his own his studio and confidently recommended it to Marquand. While Marquand likely traveled to London to solidify his wishes with Johnstone, Norman & Co., the commission was carried out under the active supervision of Alma-Tadema, whose designs for the piano and a suite of matching furniture and textiles were converted to fabrication drawings.

Alma-Tadema and His Art, Full Circle

The piano has a rich history as a musical instrument. Its interior lid was fitted with parchment sheets so it could be signed by the musicians who played it. Over the years, a number of famous musicians signed it, including Walter Damrosch, Sir Arthur Sullivan, Sir William S. Gilbert, and Richard Rogers. The exhibition includes a room devoted to the musical history of the piano, featuring a video of the recent performances on the piano including music tied to its history, as well as several listening stations programmed with other selections associated with the piano.

Following Marquand’s death in 1902, the contents of his house were dispersed in a highly publicized and very successful public auction. The Alma-Tadema suite sold to several buyers. The piano and its stools were purchased by a Colonel William Barbour, who owned it for two decades. When it came on the market in 1923, theater impresario Martin Beck purchased it. He also was able to acquire some of the other original furniture from the suite in a separate auction four years later, and he placed the piano and various chairs, settees, and tables from the suite in the mezzanine lobby of the Martin Beck Theatre (now the Al Hirschfeld Theatre) on 45th Street in Manhattan. Eventually sold by the theater’s owners, the furniture pieces entered into museum and private collections as cherished objects reflective of the era’s highest standards of design and taste.

Alma-Tadema achieved great success during his lifetime. His paintings of imagined scenes from ancient times have influenced directors of films set in antiquity such as BenHur and Gladiator, among others. While admiration for his academic style of painting waned in the early decades of the twentieth century, in recent years there has been renewed interest in his work, and in 2011 his canvas 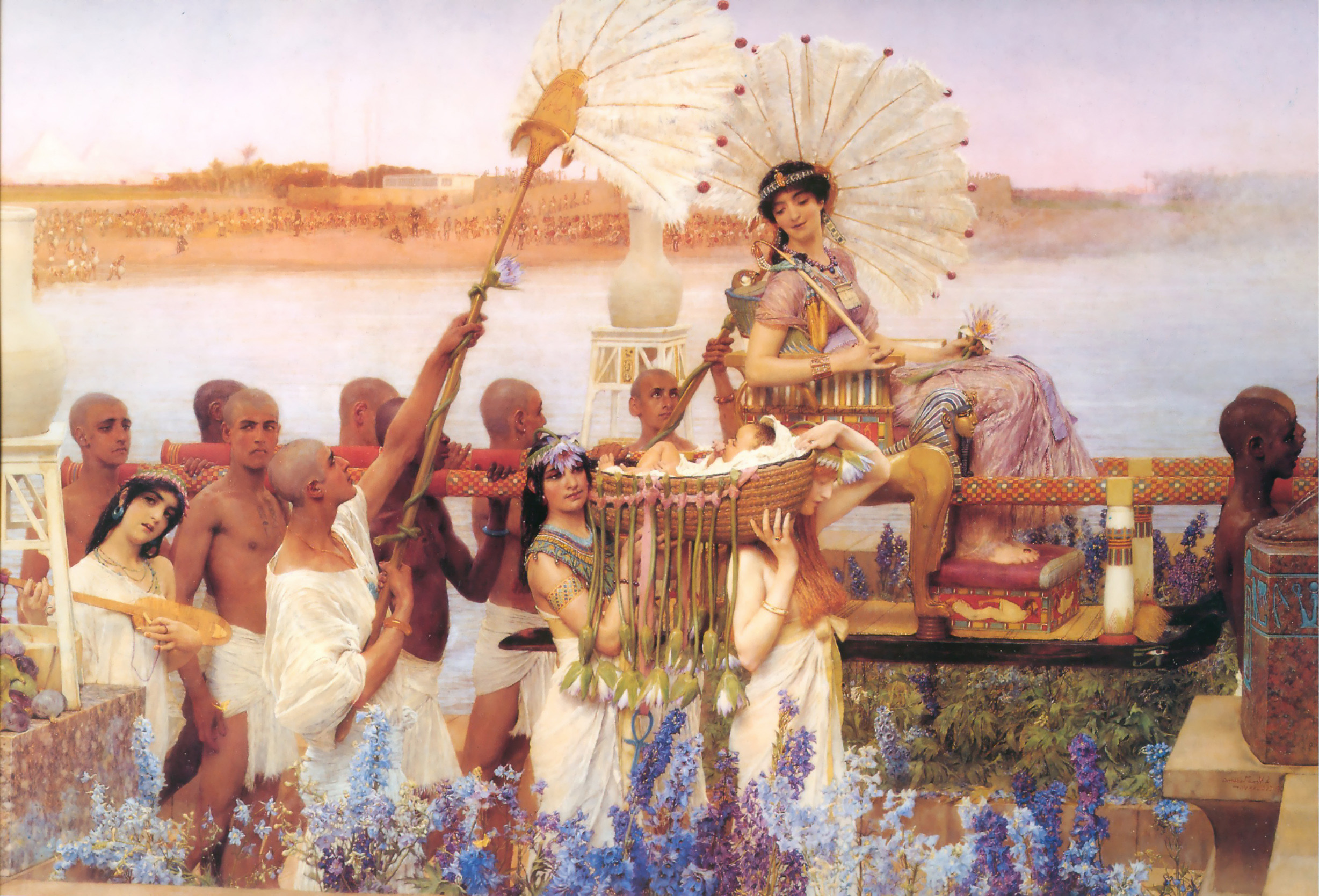 The Finding of Moses sold for $35.9 million—an auction record for the artist.

In 2016 The Fries Museum opened the major exhibition Alma-Tadema: At Home in Antiquity, which traveled to Vienna and will be shown in summer 2017 in London, the city where Alma-Tadema enjoyed his greatest success.

Orchestrating Elegance: Alma-Tadema and the Marquand Music Room, a fully illustrated catalogue of the exhibition, is distributed by the Clark and Yale University Press. Contributors include co-curators Kathleen M. Morris and Alexis Goodin, with essays by Melody Barnett Deusner and Hugh Glover.
Posted by Jonathan Kantrowitz at 12:36 PM