For renowned artist Whistler (1834–1903), watercolor was the medium through which he reinvented himself in the 1880s and painted his way into posterity. Now, four co-curators at the Smithsonian’s Freer Gallery of Art and Arthur M. Sackler Gallery have brought together the worlds of art history, conservation and scientific research to give the public special insight into this part of Whistler’s life and rare access to the artworks in the exhibition “Whistler in Watercolor.”

Because of his great affinity for Whistler’s art, Freer amassed the world’s largest collection of watercolors by the artist and included them in his bequest to the Smithsonian in 1906. Freer’s collection comprises more than 50 examples—figures, landscapes, nocturnes and interiors—of Whistler’s watercolors, yet they have never left the Freer Gallery of Art. “Whistler in Watercolor” introduces people to the artist’s vast creative output and provides wide access to a rarely seen segment of his work.

“This is a groundbreaking exhibition for a number of reasons,” said curator Lee Glazer. “The watercolors—‘dainty,’ ‘beautiful’ and ‘portable’ as the artist described them—are critical to understanding how Whistler’s art historical ambition and his canny understanding of the commercial art market coalesced.”

“Whistler in Watercolor” does much more than assemble the full range of Whistler’s work in watercolor. It is the culmination of research by museum curators, scientists and conservators that shines new light on Whistler’s materials, techniques and artistic genius.

The Freer|Sackler’s Department of Conservation and Scientific Research is the foremost center in the United States for the care and scientific study of the arts of Asia. “Whistler in Watercolor” gave staff the rare opportunity to investigate some of the museum’s American collection.

McCarthy, together with paper conservator Emily Jacobson, employed scientific tools including reflected infrared imaging, which revealed alterations in composition and microscopic examination, to examine the watercolors and learn more about Whistler’s techniques, which uncovered information about the artist’s use of watercolor paper. The team’s methods and discoveries are fully described in the accompanying publication Whistler in Watercolor.

This exhibition is the culmination of more than four years of art historical and scientific research of these rarely seen pieces of art, and a perfect example of how Freer|Sackler experts—sometimes in unexpected ways—care for, research and share the museums’ unique collections. 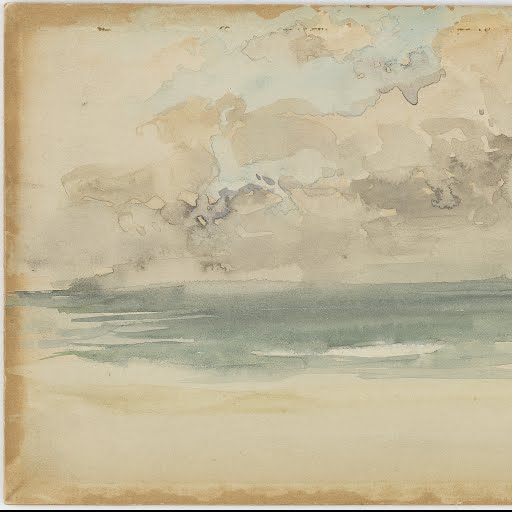 
The Peacock Room in Blue and White
May 18—ongoing
What ultimately led Whistler to delve seriously into watercolors was one of the more infamous chapters in his career—his creation of the now-iconic Peacock Room for his patron Frederick Leyland, a shipping magnate in London. With the blue-and-white ceramics reinstalled, curators at the Freer|Sackler have returned the room to how it appeared in Whistler’s time.
In 1876, Leyland had the shelves of his dining room filled with blue-and-white Chinese porcelains of the Kangxi era. Their patterns and colors inspired Whistler to redecorate the room in a profusion of blue, green and gold patterns similar to peacock plumage. The intricate patterns provided a tonal counterpoint to the bolder patterns and colors of the porcelains. Leyland, however, found the artist’s modifications—and his fee—excessive. The two men quarreled, and Leyland terminated his relationship with Whistler. The loss of this key patron, combined with the legal fees incurred during Whistler’s libel suit against art critic John Ruskin, sent the artist into bankruptcy. He turned to watercolors in the 1880s as way to broaden the audience for his work and take his career in a fresh direction.
The challenge for the museum’s curators to present the space as Whistler intended was having enough porcelains to fill the room. Kangxi-era pots in the Freer collection could only fill less than half of the 218 shelves, so the curators decided to commission more than 100 new vessels.
“Blue-and-white porcelain from the Freer collection adorn the shelves of the east and north walls, and newly commissioned pieces in the Kangxi style line the west and south walls,” said Kerry Roeder, the Luce curatorial fellow at the Freer|Sackler. “These porcelains are not reproductions of historical blue-and-white ware. Instead, they reflect the continuity of a 1,500-year-old porcelain-making tradition in Jingdezhen, China, and several are representations of objects in our collection.”
Porcelain production during the Kangxi period greatly expanded China’s export trade with Europe, sparking the East-West exchange that endures to this day.
“One of the most thrilling aspects of this new installation is that it allows visitors to experience the room in much the same way Whistler originally envisioned it,” Roeder said.
Posted by Jonathan Kantrowitz at 7:39 AM