The most comprehensive U.S. career retrospective to date of the work of Frank Stella, co-organized by the Whitney Museum of American Art and the Modern Art Museum of Fort Worth, debuted at the Whitney on October 30, 2015.

Frank Stella: A Retrospective brings together the artist’s best-known works installed alongside lesser known examples to reveal the extraordinary scope and diversity of his nearly sixty-year career. Approximately 100 works, including icons of major museum and private collections, will be shown. Along with paintings, reliefs, sculptures, and prints, a selection of drawings and maquettes have been included to shed light on Stella’s conceptual and material process.

This will be the inaugural special exhibition and the first career retrospective devoted to a living artist in the Whitney’s new downtown home on Gansevoort Street. It will fill the entire 18,000-square-foot fifth floor—the Museum’s largest gallery for temporary exhibitions. Selldorf Architects is doing the exhibition design for the Whitney installation.This is the first comprehensive Stella exhibition to be assembled in the United States since the 1987 retrospective at The Museum of Modern Art, New York.

“A Stella retrospective presents many challenges,” remarks Michael Auping, “given Frank’s need from the beginning of his career to immediately and continually make new work in response to previous series. And he has never been timid about making large, even monumental, works. The result has been an enormous body of work represented by many different series. Our goal has been to summarize without losing the raw texture of his many innovations.”“It’s not merely the length of his career, it is the intensity of his work and his ability to reinvent himself as an artist over and over again over six decades that make his contribution so important,” said Adam D. Weinberg.

“Frank is a radical innovator who has, from the beginning, absorbed the lessons of art history and then remade the world on his own artistic terms. He is a singular American master and we are thrilled to be celebrating his astonishing accomplishment.”Throughout his career, Stella has challenged the boundaries of painting and accepted notions of style. Though his early work allied him with the emerging minimalist approach, Stella’s style has evolved to become more complex and dynamic over the years as he has continued his investigation into the nature of abstract painting.

Adam Weinberg and Marla Price, Director of the Modern Art Museum of Fort Worth, note in the directors’ foreword to the catalogue, “Abstract art constitutes the major, and in many ways, defining artistic statement of the twentieth century and it remains a strong presence in this century. Many artists have played a role in its development, but there are a few who stand out in terms of both their innovations and perseverance. Frank Stella is one of those. As institutions devoted to the history and continued development of contemporary art, we are honored to present this tribute to one of the greatest abstract painters of our time.”

Although the thrust of the exhibition is chronological, the artist, who has been closely involved in the installation, has juxtaposed works from various periods allowing some rooms to function as medleys. The presentation highlights the relationships among works executed across the years, suggesting that even the most minimalist compositions may invite associations with architecture, landscapes, and literature.


The earliest works in the exhibition are rarely seen early paintings, such as 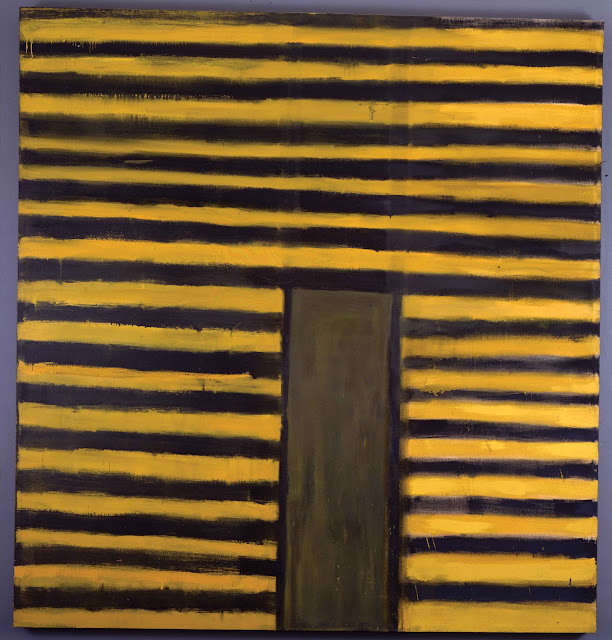 
East Broadway(1958), from the collection of Addison Gallery of American Art, which show Stella’s absorption of Abstract Expressionism and predilections for bold color and all-over compositions that would appear throughout the artist’s career. Stella’s highly acclaimed Black Paintings follow. Their black stripes executed with enamel house paint were a critical step in the transition from Abstract Expressionism to Minimalism.


The exhibition includes such major works as Die Fahne hoch! ( 1959), a masterpiece from the Whitney’s own collection, and

The Marriage of Reason and Squalor II( 1959) from The Museum of Modern Art’s collection.

A selection of the artist’s Aluminum and Copper Paintings of 1960–61, featuring metallic paint and shaped canvases, further establish Stella’s key role in the development of American Minimalism. Even with his early success, Stella continued to experiment in order to advance the language of abstraction.

The presentation of Stella’s work highlights the artist’s exploration of the relationship between color, structure, and abstract illusionism, beginning with his Benjamin Moore series and Concentric Square Paintingsof the early 1960s and 70s—including the masterpiece

These were followed by the even more radically shaped Irregular Polygon Paintings, such as


and the monumental Protractor Paintings, such as 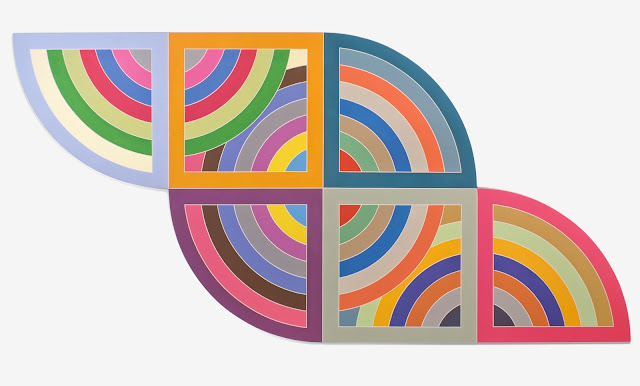 The Polish Village series marks the beginning of Stella’s work in collage. He begins to build paintings and incorporate various materials into large-scale constructions, further probing questions of surface, line, and geometry. In works like Bechhofen (1972), from the San Francisco Museum of Modern Art, the interlocking geometric planes of unpainted wood stretch the purely pictorial into literal space.The work of the mid-1970s and 1980s constitutes yet another form of expressive abstraction and illustrates Stella’s absolute insistence on extending his paintings into the viewer’s space. During his tenure as the Charles Eliot Norton Professor in Poetry at Harvard University (1983-4), Stella said that “what painting wants more than anything else is working space—space to grow with and expand into, pictorial space that is capable of direction and movement, pictorial space that encourages unlimited orientation and extension. Painting does not want to be confined by boundaries of edge and surface.”

Works from the artist’s Brazilian; Exotic Bird; Indian Bird; Circuit; and Cones and Pillarsseries, including

In these works, sheets of cut metal project out from the picture plane, creating gestures that are further activated with drawing and the addition of various reflective materials. The radical physical and material nature of these works was quite influential to a younger generation of painters in the 1980s. In the last thirty years, much of Stella’s work has been related in spirit to literature and music.

The large-scale painted metallic reliefs in the Moby Dick series (1985-97), titled after each of the chapters of Melville’s novel, also exemplify Stella’s idea of “working space.” The complexity of this series, made primarily in metallic relief with fabricated, cast, and found parts; prints; and freestanding sculpture, is a tour de force.

Extraordinary abstractions such as

Loomings from the Walker Art Center and

The Grand Armada (IRS-6, 1X) from the Fondation Beyeler, Riehen/Basel, suggest an abstract narrative composed of visual elements, such as waves and fins, which recur in Melville’s novel.

Since the 1990s Stella has explored this concept in increasingly complex two-and three-dimensional works of various materials,

such as the large-scale aluminum and steel sculpture Raft of the Medusa(Part I)( 1990) from the collection of The Glass House;

and the mural-size painting Earthquake in Chile (1999), part of the artist’s Heinrich von Kleist series (1996-2008), which takes as its point of departure the writings of the early 19thcentury German author.

Extraordinary metal reliefs from his Bali series (2002-2009), as well as the lightweight and dynamic sculpture from his Scarlatti Sonata Kirkpatrick series (2006-present), whose delicacy and intricacy suggest the musical compositions of the Baroque master, represent the later work in the exhibition. In many of these works Stella has used computer generated images and modeling to extend the complexity, layers, and allusions of his material process well beyond traditional media for painting and sculpture. Two of Stella’s recent sculptures, 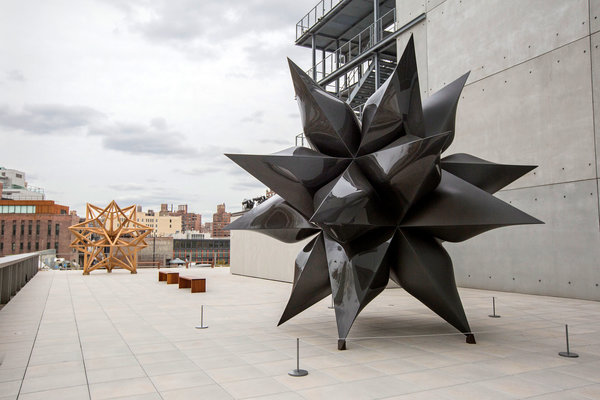 
are installed on the fifth-floor roof terrace.

Frank Stella: A Retrospective underscores the important role Stella’s work plays within the art historical framework of the last half century. It provides a rare opportunity for viewers to discover the visual and conceptual connections within the extraordinarily expansive and generative body of work of an artist restless with new ideas.

Born in Malden, Massachusetts, in 1936, Stella attended Phillips Academy and then Princeton University, where he studied art history and painting. In college, he produced a number of sophisticated paintings that demonstrated his understanding of the various vocabularies that had brought abstract painting into international prominence. After graduating in 1958, Stella moved to New York and achieved almost immediate fame with his Black Paintings(1958–60), which were included in The Museum of Modern Art’s seminal exhibition Sixteen Americansin 1959-60. The Leo Castelli Gallery in New York held Stella’s first one-person show in 1960. The Museum of Modern Art presented his first retrospective in 1970, under William Rubin’s stewardship, when Stella was only thirty-four years old. A second retrospective was held at MoMA in 1987. Since then, Stella has been the subject of countless exhibitions throughout the world, including a major retrospective in Wolfsburg in 2012.

Frank Stella: A Retrospective is the first survey of the artist’s career in the U.S. since 1987. He was appointed the Charles Eliot Norton Professor of Poetry at Harvard University in 1983. “Working Space,” his provocative lecture series (later published as a book), addresses the issue of pictorial space in postmodern art. Stella has been the recipient of numerous awards and honors, including the 2009 National Medal of Arts and the 2011 Lifetime Achievement in Contemporary Sculpture Award from the International Sculpture Center, as well as the Isabella and Theodor Dalenson Lifetime Achievement Award from Americans for the Arts (2011) and the National Artist Award at the Anderson Ranch Arts Center in Aspen (2015). 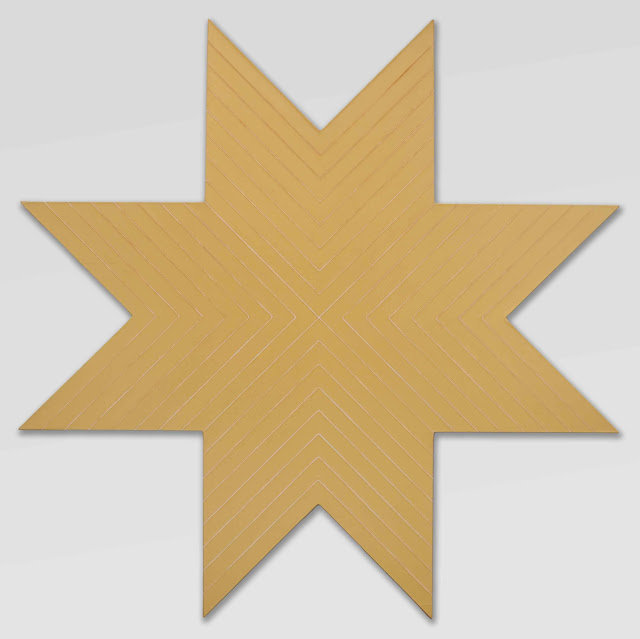 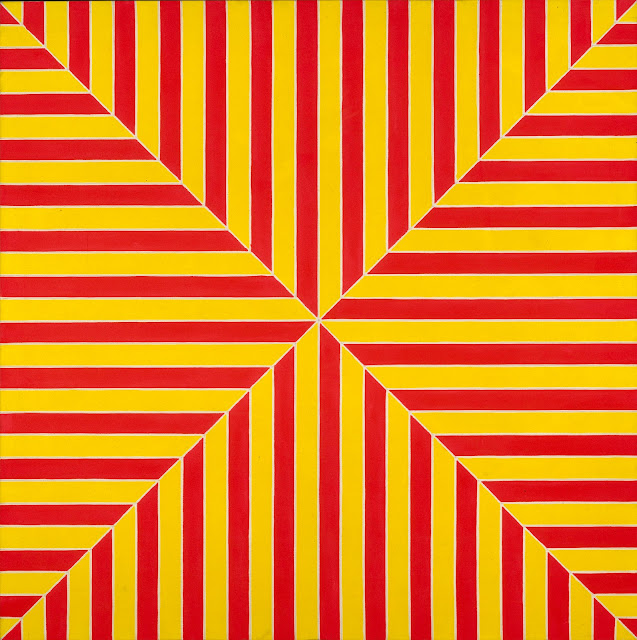 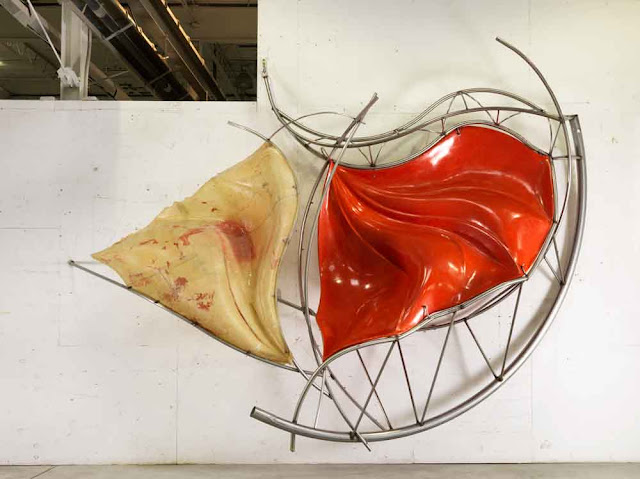 The exhibition is accompanied by a fully illustrated scholarly catalogue, published by the Modern Art Museum of Fort Worth, the Whitney Museum of American Art, and Yale University Press. The publication addresses in depth such themes as the artist’s complex balancing of expressionist gesture and geometric structure, his catholic referencing of the history of art (abstract, figurative, and decorative), the importance of seriality in Stella’s process, and his work’s impact on subsequent generations of American artists.

The book’s spectacular plate section comprises more than 100 works, including paintings, sculptures, reliefs, and works on paper. Notable inclusions are his seminal Black Paintings, recent high-relief aluminum works, and a selection of drawings, maquettes, and digital renderings—many of which are reproduced here for the first time—that offer fresh insight into Stella’s thinking and process.

Frank Stella: A Retrospective is jointly organized by the Whitney Museum of American Art, New York, and the Modern Art Museum of Fort Worth.


Posted by Jonathan Kantrowitz at 6:01 AM