On 9th December this year, Sotheby’s London will offer for sale John Constable's The Lock -one of the small group of monumental landscapes, known as the 'Six Footers', which for many define the pinnacle of the artist's career. Depicting a bucolic scene on the River Stour in the artist’s native Suffolk, and painted in response to the huge critical acclaim that greeted Constable's first treatment of the composition (exhibited at the Royal Academy in 1824), the picture was treasured by the artist –retained by him in his studio till the end of his life, singled out by him for prestigious exhibitions, and chosen as the basis for the engraving that was to make it among the most familiar, and celebrated, images in the canon of British art.

Having remained in the same family collection for over 150 years, it now comes to the market for the first time since 1855 with an estimate of £8-12 million.


Major works by Constable are extremely rare in private hands. Of the other paintings forming part of the famous ‘six-footer series’ –the monumental Stour landscapes which rank among the most celebrated of Constable’s paintings –all but two are currently in public institutions. Indeed this picture is one of only three major paintings by Constable left in a private collection. 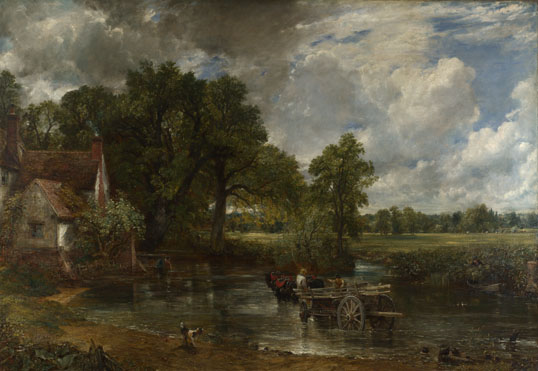 The Hay Wain, to the small group of pictures that for many define Constable’s career. Constable’s absolute mastery as a landscape painter is everywhere in this picture –in the vigour of the almost impressionistic brushwork, in the drama of the clouds and the changing weather, even in the movement of the grass in the fields and the sparkle of water as it cascades through the lock. It is one of those pictures that captivates, and the more one looks, the more one sees.”


David Moore-Gwyn, British Paintings consultant to Sotheby’s, said: “For many people, Constable captures, like no other artist, the essence and beauty of the English countryside. This is quite simply one of the most loved and celebrated works in the history of British Art and also one of a very small handful of great Constables still in private hands.”


CONSTABLE AND THE LOCK


Unlike his contemporary J.W.M.Turner, Constable did not achieve great commercial success in his lifetime. Critical acclaim and acceptance by the art establishment came late for him too. He was 54 before he was elected to the Royal Academy in 1829, so when, in 1824,the first version of The Lock was exhibited at the R.A. to huge acclaim, selling within moments to an illustrious and eager collector, it is perhaps not surprising that Constable immediately set about painting another version of the composition that had proved so successful. With The Lock, it seemed, he had found a composition that spoke both to his own, very personal and rigorous standards and that at the same time resonated with a hitherto largely uninterested public.


When revisiting the composition, however, Constable did not slavishly reproduce his earlier rendering. Instead, he made small but important changes, most notably intensifying the atmosphere. Touches like the inclusion of more dramatic rainclouds than those in the previous version subtly hint to the move towards the more romantic sensibility of Constable’s final years. (The storm clouds brewing in The Lock compare very well with those in renowned

Salisbury Cathedral from the Meadows of 1831, now in the Tate, London).

Constable remained deeply attached to this picture throughout his life. Possibly because for him it represented a ‘break-through’ moment, but also, no doubt, because of his deep affection for the landscape it depicts -the local area around East Bergholt which first inspired his imagination and made him a painter. His great satisfaction with, and affection for, the painting meant that he chose it both for major exhibitions (in Brussels in 1833 and in Worcester in 1834) and as the basis for the much-loved and widely circulated print by David Lucas.

Also in the auction:


Posted by Jonathan Kantrowitz at 7:41 AM