In 1943 Grenville Lindall Winthrop bequeathed his entire collection of more than 4,000 works of art to his alma mater, Harvard College. During his life, he almost never lent objects from his collection to museums, and in keeping with his wishes, the works have always been at Harvard, available to students and scholars, rather than on loan to other institutions.

Over the course of four and a half decades, Winthrop assembled objects from almost every culture and historical period. In particular, no other collector could claim the depth of Winthrop's reach in both French and British art together. Rather than purchase already-formed collections of drawings, Winthrop was a pioneer in establishing a collection of works on paper, piece by piece.

Winthrop acquired more works by Jean-Auguste-Dominique Ingres than any other private collector of his day. The exhibition at the Metropolitan included 34 of Winthrop's Ingres, including and Odalisque with the Slave (ca. 1837-40), as well as a number of drawn and painted portraits.

Jacques-Louis David's 1817 portrait of his friend and fellow revolutionary

and sketchbooks containing more than 100 studies for David's monumental

Coronation of Napoleon I (Le Sacre). and Eugène Delacroix's A Turk Surrenders to a Greek Horseman (1856).

In addition to paintings by many of the leading French Impressionists and Post-Impressionists, the exhibition featured eleven sculptures by Auguste Rodin, and a selection of Edward Burne-Jones's watercolors, Days of Creation (1875-76),

were among the important group of paintings and drawings by the British Pre-Raphaelites.

Winthrop assembled one of the finest collections of works by William Blake, represented here by one of artist's rare oil paintings, 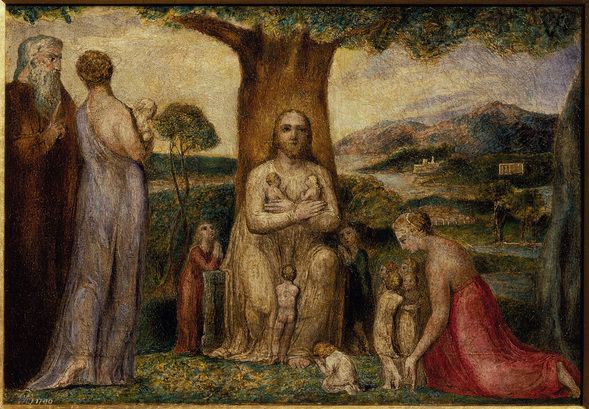 Thy Sons and Thy Daughters Were Eating and Drinking Wine, (1821) A great admirer of the progressive artists of 19th-century America, Winthrop owned a group of watercolors by Winslow Homer that included The expatriate American artists John Singer Sargent and James Abbott McNeill Whistler were represented in his collection as well; the former by five pictures, the latter by eight, including a shimmering A Private Passion debuted at the Musée des Beaux-Arts, Lyon, in the spring of 2003. It then traveled to the National Gallery, London, before its appearance at the Metropolitan Museum.

The exhibition was organized by an international committee of curators coordinated by Stephan Wolohojian, Curator of Paintings, Sculpture, and Decorative Arts, Fogg Art Museum, Harvard University Art Museums. The exhibition will be installed at the Metropolitan by Gary Tinterow, Engelhard Curator of 19th-Century European Painting, with the assistance of Rebecca A. Rabinow, Assistant Research Curator.

Stephan Wolohojian edited the fully illustrated catalogue, which contains contributions by more than 60 specialists. The catalogue was published by The Metropolitan Museum of Art and distributed by Yale University Press.

Posted by Jonathan Kantrowitz at 7:09 AM