Pierre Bonnard at the Fondation Beyeler


With the exhibition “Pierre Bonnard”, 29 January – 13 May 2012, the Fondation Beyeler celebrated one of the most fascinating of modern artists. With more than 60 paintings by the renowned French colorist on loan from international museums and private collections, the show provides a fresh review of Bonnard's oeuvre and development. It covers his entire career from his beginnings with the Nabis through Symbolism and Impressionism to his ever more colorful and abstract late works. The paintings depict familiar scenes with bathers, views of the artist's garden, everyday life, and the bustle of the Paris streets.

Born in Fontenay aux Roses near Paris, Bonnard (1867–1947) worked principally in his private residences and studio apartments in Paris. The main locations were his house "Ma Roulette" in Vernnonet, Normandy (1912-39), and the villa "Le Bosquet" in Le Cannet on the Côte d'Azur (1927-47) and their respective gardens. In these personal surroundings Bonnard found the scenes and inspirations for his compositions in color as well as his preferred subjects, to which he remained faithful throughout his life while varying them in different ways. Marthe, his lover and, from 1925, his wife, was his favorite model. The wedding ended the ménage à trois among Marthe, Bonnard and Renée Monchaty - the painter's model, muse and lover from 1918 onwards - who reacted by taking her own life.

At the onset of the twentieth century, Bonnard practiced his own personal style, a "different modernism" beyond all "isms" beholding to French classicism, and never questioned the centrality of objectivity. Yet he broke through the traditional barriers between genres and developed them further. He created unconventional still lifes that included human figures and animals. Landscapes depicting "wild nature" stood in contrast to vibrant Parisian cityscapes. In his representations of interiors he oscillated between intimate depictions of his wife at her toilette and views of their bourgeois dining room.

The vitality of his often luminous palette soon set Bonnard off from the Impressionists. Turning away from their attempts to capture the fleeting moment, he represented the permanence and memorableness of things. With the aid of color composition, he lent his paintings an unusual sense of space as perceived by the human eye rather than the camera lens. In the end, he was concer-ned to convey the whole range of sensory impressions through color.

If shortly after his death in the middle of the past century Bonnard was viewed as a representative of a superficial harmony and an "innocent" chronicler of haute bourgeois life, ever since the 1984 travelling exhibition at the Centre Pompidou, Paris (which was also on view at the Zurich Kunst-haus), he has figured as an artist who captured the profound disquiet of a society destined to vanish. By means of subtle aesthetic nuances, Bonnard delved beneath the ostensible harmony of the day. This is seen in his color dissonances, interpenetrating spaces, ambiguous locations and alogical figure placements.

The exhibition opened with the room "La Rue." Bonnard painted Parisian street scenes especially in his early phase. He repeatedly chose a busy traffic intersection in northwestern Paris not far from his studio, as evidenced by two outstanding paintings of the same title - Place Clichy 1906-07 from a private collection

The next room featured depictions of Bonnard's "Salle à manger" with its very special atmosphere. This dining room offered him many opportunities to cast an often humorous eye on the bourgeois interior, as in the major painting 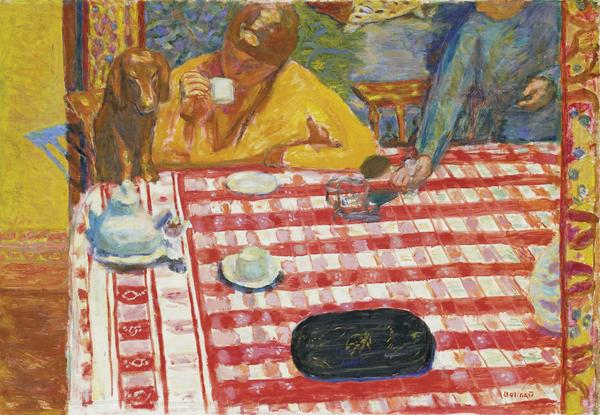 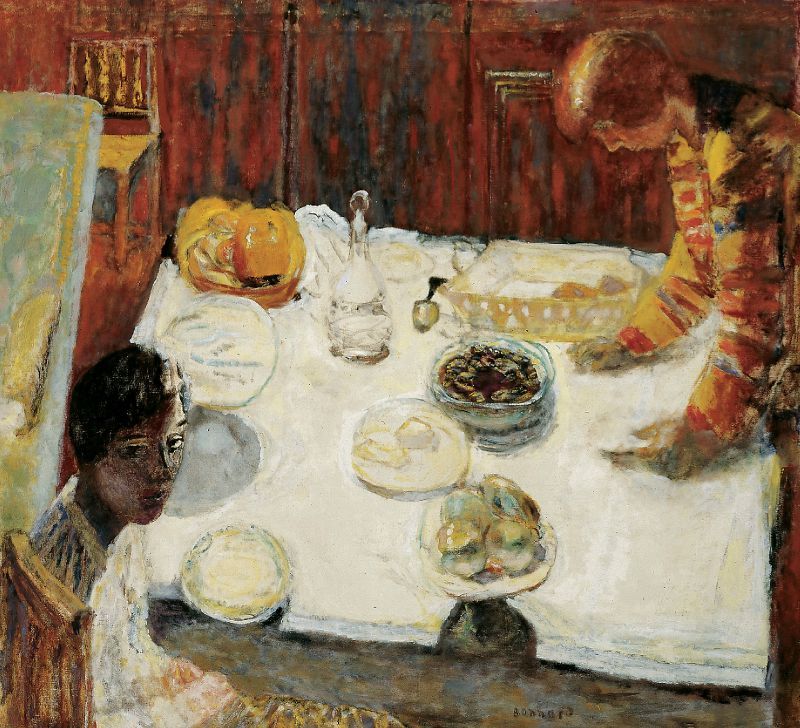 and La Nappe blanche (The White Tablecloth), 1925, from the Von der Heydt-Museum, Wuppertal.

The dining room still lifes marked a contrast with the intimate interiors of the bedrooms and bathrooms on view in the room "La Salle de bains."

The nude was one of Bonnard's favorite motifs. The major examples on view here included

Depicting the artist and his lover, Marthe, this early work marked a first transition point in Bonnard's oeuvre, possessing a very modern-looking naturalness with which he left the stark simplifications of the Nabi phase behind. Besides the other rooms in his house, Bonnard was particularly inspired by the bathroom, from 1908 focusing increasingly on the subject of a woman at her toilette. An outstanding example, on account of its condensed spatial structure, is

Bonnard's bathtub motifs are renowned. A full five works in this genre were on view:

La Source (Nu dans la baignoire), (The Source (Nude in the Bathtub)), 1917, from a private collection;

Nu à la baignoire (Sortie du bain), (Nude by the Bathtub (Getting out of the Bath)), 1931, from the Musée national d'Art moderne, Centre Georges Pompidou, Paris; A further section comprised solely pictures with the mirror motif, which expands the pictorial space and simultaneously questions it. Here, in addition to one could find two self-portraits made in front of the mirror in the artist's bedroom: Next came a room devoted to the important relationship between interior and exterior space in Bonnard's art. Windows intrigued him throughout his career. His views through windows are always recognizable as such, the outside world being clearly perceived from an interior point of view. This leads to an integration of the environment in the interior realm, as wasseen to good effect in 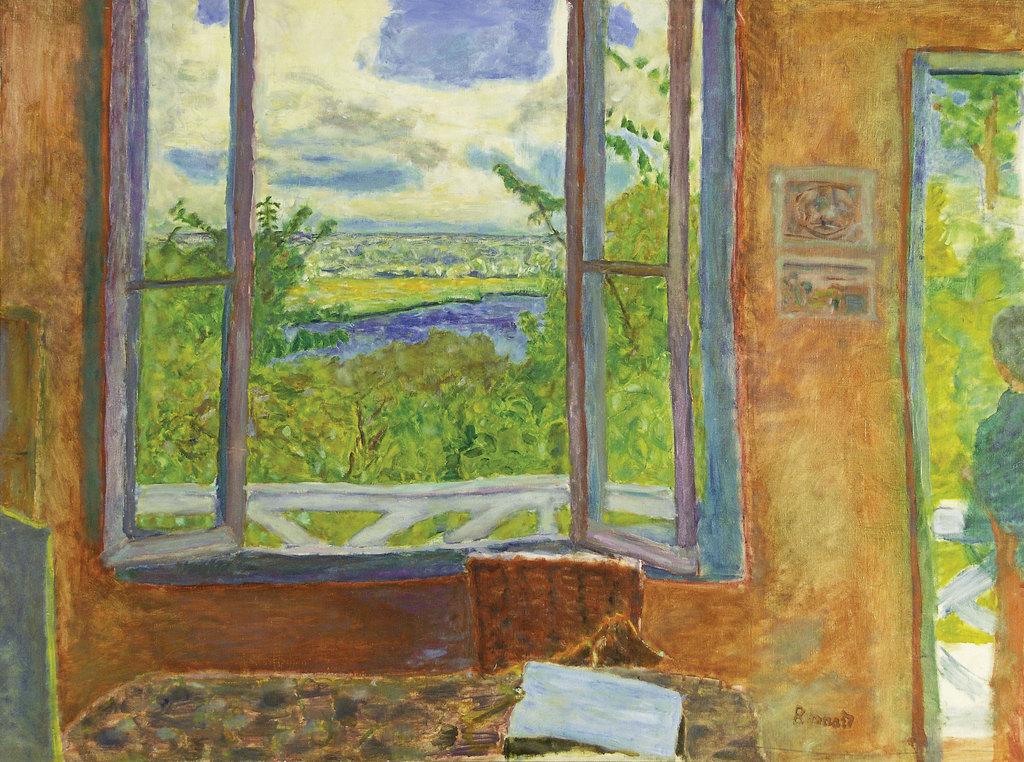 The exhibition also included a rather large number of garden depictions from all phases of the artist's career. After the turn of the century, nature advanced to become a key motif in Bonnard's visual repertoire. In his eyes the garden represented an order in which the human relationship to nature in general was reflected. In the early the landscape still serves as a foil for an ornamental harmony.

In his later nature depictions Bonnard interlocked the landscape and garden with his house, as seen in the famous painting and Décor à Vernon (La Terrasse à Vernon), (The Terrace at Vernon), 1920/39, from the Metropolitan Museum of Art, New York.

The "Pierre Bonnard" exhibition continued the Fondation Beyeler tradition of devoting exhibitions to artists represented in its collection. Ernst Beyeler dealt in Bonnard works and in 1966 mounted a Bonnard show in his gallery. With

the Beyeler Collection possesses one of the artist's major late still lifes.

One of the principal lenders is the Musée d'Orsay, Paris, with four significant works: apart from La Partie de croquet, Autoportrait (Le Boxeur) and L'Homme et la Femme, already mentioned, the museum was represented by

The exhibition was curated by Ulf Küster, Fondation Beyeler Curator.

Posted by Jonathan Kantrowitz at 8:18 AM