Toulouse-Lautrec and Jane Avril - Beyond The Moulin Rouge

Jane Avril in the Entrance to the Moulin Rouge, c.1892 © The Samuel Courtauld Trust, The Courtauld Gallery, London

Nicknamed La Mélinite after a powerful form of explosive, the dancer Jane Avril (1868-1943) was one of the stars of the Moulin Rouge in the 1890s. Known for her alluring style and exotic persona, her fame was assured by a series of dazzlingly inventive posters designed by the artist Henri de Toulouse-Lautrec (1864-1901). Jane Avril became an emblematic figure in Lautrec’s world of dancers, cabaret singers, musicians and prostitutes.

She was also a close friend of the artist and he painted a series of striking portraits of her which contrast starkly with his exuberant posters. Organised around The Courtauld Gallery’s painting Jane Avril in the Entrance to the Moulin Rouge, the exhibition explored these different public and private images of Jane Avril.

Toulouse-Lautrec and Jane Avril: Beyond the Moulin Rouge brought together a rich group of paintings, posters and prints from international collections to celebrate a remarkable creative partnership which captured the excitement and spectacle of bohemian Paris.

In contrast to Toulouse-Lautrec, who was a member of one of France’s oldest noble families, Jane Avril was the daughter of a courtesan. Born Jeanne Beaudon, she suffered an abusive childhood and, aged thirteen, ran away from home. The following year she entered the formidable Salpêtrière hospital in Paris to be treated for a nervous disorder popularly known as St Vitus’ Dance.

It was at one of the bal des folles, the fancy dress balls which the hospital organised for its patients, that she took her first dance steps and found both her cure and her vocation. New research undertaken for this exhibition examined the connections between her eccentric movements, described by one observer as an ‘orchid in a frenzy’, and contemporary medical theories of female hysteria. Her experiences helped shape her public persona and, as a performer, she was also known as L’Etrange (the Strange One) and Jane La Folle (Crazy Jane).

At the age of twenty she was taken on by the Moulin Rouge as a professional dancer. Adopting the stage name Jane Avril (suggested to her by an English lover), she was determined to make her mark as a star in the flourishing world of the Montmartre dance-halls and cabarets, which featured such larger-than-life personalities as La Goulue (the Glutton), Grille d’Egout (Sewer-grate) and Nini les-Pattes-en-l’air (Nini legs-aloft).

The ability to generate publicity through a carefully crafted image was the key to success and celebrity in the entertainment industry of Montmartre. 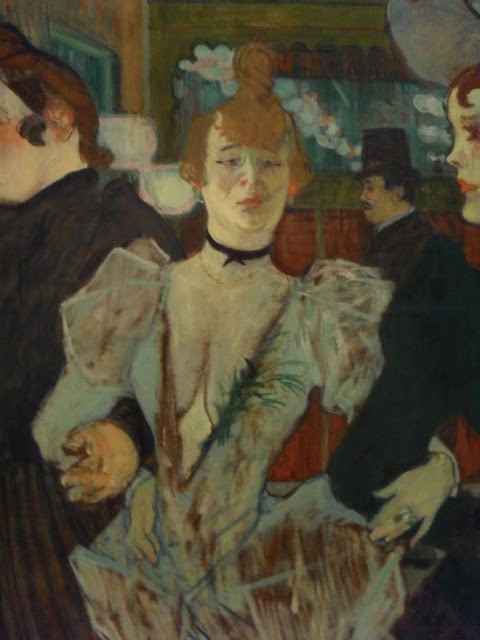 A racy portrait of the brazen La Goulue, lent to the exhibition by the Museum of Modern Art in New York, underscored the contrasting sophistication of Avril’s public image.

The epicentre of this world was the famous Moulin Rouge. Opened in 1889, it offered customers a nightly programme of performances by its roster of stars.

At the Moulin Rouge, an exceptional loan from the Art Institute of Chicago, is one of Toulouse-Lautrec’s most celebrated paintings and wasa highlight of the exhibition. It serves as the artist’s homage to this venue as well as a monumental group portrait of his circle. Shown from the rear, Jane Avril is instantly recognizable by her red hair. The scandalous La Goulue is seen with raised arms in the background, where the diminutive figure of Lautrec can also be made out. The ghostly face of May Milton, one of several English performers, looms into the canvas from the right.

Although she also sang, Jane Avril’s true vocation was as a solo dancer and she devised her own choreographic routines and dress. Combining sensuality and ethereal detachment, her remarkable performances captured the imagination of artists and writers alike. Lautrec’s friend, Paul Leclercq, described the scene:

‘In the midst of the crowd, there was a stir, and a line of people started to form: Jane Avril was dancing, twirling, gracefully, lightly, a little madly; pale, skinny, thoroughbred, she twirled and reversed, weightless, fed on flowers; Lautrec was shouting out his admiration.’

Jane Avril became the subject of some of Lautrec’s greatest posters, landmarks in the history of both art and advertising. One of the first was made to promote Avril’s appearance at the Jardin de Paris, to which a special bus ran every night after the Moulin Rouge closed at eleven. This large and dramatic poster shows Jane Avril in the provocative high kick of the cancan, framed by the hand of a musician grasping the neck of a double-bass. The radical composition reflects Lautrec’s admiration for Japanese prints. The poster was an instant hit and Avril credited it with launching her career.

No less striking is the image of Jane Avril seen in profile as a member of the audience at the venue known as the Divan Japonais. As in all his publicity posters, Lautrec focuses on enhancing the uniquely recognisable aspects of his subject’s appearance.

One of Lautrec’s last posters of Avril shows her full length; a snake coils up her dress, animating her wild dance.

In 1896 Jane Avril travelled to London to perform at the Palace Theatre as part of the troupe of Mademoiselle Eglantine. At her personal request Toulouse-Lautrec designed a poster for the performance which shows Avril at the end of the line of four cancan dancers, captured in a brilliant froth of petticoats and black stockings. The exhibition reunited a group of material relating to this commission, including a preparatory drawing, Avril’s letter to Lautrec from London and the programme for the Palace Theatre. Avril’s repertoire included songs such as Mon Anglais (My Englishman). She admired England and critics speculated that aspects of her dance style and attire had English origins. She noted pointedly in her memoirs that ‘over there, one lives freely, without bothering others or making fun of them, as happens so often at home’.

Toulouse-Lautrec’s relationship with Jane Avril was closer than with any of his other Montmartre subjects and she remained the artist’s loyal friend until his death. Their friendship is reflected in a series of remarkable portraits in which the star is shown as a private individual, in contrast with her exotic poster image and her performances at the Moulin Rouge.


An arresting bust-length portrait of Avril, loaned by the Sterling and Francine Clark Art Institute, focuses on her startlingly white and angular face. The Courtauld Gallery’s Jane Avril in the Entrance to the Moulin Rouge captures Avril on the cusp of public and private worlds. A carriage is glimpsed in the background while the hat and coat on the wall may allude to her male admirers. However, she seems withdrawn and far older than her twenty-two years. In Jane Avril leaving the Moulin Rouge, Avril is shown as a passer-by, an elegant but anonymous and solitary figure. The exhibition reunites these portraits for the first time and also includes a rich documentary section exploring the intersection of Avril’s medical history and her public persona.


Toulouse-Lautrec’s death in 1901 marked the end of the golden age of Montmartre. Jane Avril went on to perform briefly as a stage actress before marrying and settling into bourgeois obscurity. Toulouse-Lautrec and Jane Avril examines a friendship which has come to define the world of the Moulin Rouge. However, it also looks beyond Avril’s identity as a star of Lautrec’s posters to consider the complex personal histories and the cultural changes which lay behind this remarkable creative partnership.

Photos and links to reviews:

Jane Avril at the Moulin Rouge


Posted by Jonathan Kantrowitz at 8:54 AM