Jan Gossaert (active 1503; died 1532) was one of the most startling and versatile artists of the Northern Renaissance. A pivotal Old Master, Gossaert changed the course of Flemish art, going beyond the tradition of Jan van Eyck and charting new territory that eventually led to the great age of Rubens – yet this is the first major exhibition dedicated to him in more than 45 years.

'Jan Gossaert’s Renaissance' at the National Gallery, London, 23 February – 30 May 2011 included more than 80 works, and placed Gossaert in the context of the art and artists that influenced his development. It brought together many of the artist’s most important paintings with drawings, prints and contemporaneous sculptures.

Gossaert made his name working for wealthy and extravagant members of the Burgundian court in the Low Countries. In 1508–9, as part of a Vatican embassy, he was the first Northern artist to travel to Rome to make copies after antique sculpture. He became the first artist to introduce the Italian Renaissance style of depicting historical and mythological subjects with sensuous nude figures into the art of the Low Countries.

'Jan Gossaert’s Renaissance' was displayed across six rooms and traced the key themes of the artist’s work. Renaissance sculpture, prints and drawings by contemporaries such as Albrecht Dürer, Jacopo de’Barbari and Lucas van Leyden are included to demonstrate the artistic milieu of which he was a part. were displayed alongside some of his preparatory drawings as well as

This room also examined Gossaert’s interest in the Gothic tradition, the new Renaissance and architectural motifs. The 'Adoration of the Kings' was shown alongside prints that provided source material for the parts of the composition, enabling visitors to further explore this sumptuous altarpiece.

and its exterior wings

'Agony in the Garden of Gethsemane'

is one of the most carefully observed and naturalistic night scenes painted at that time. With its backlit angel, beneath a sliver of silvery moon and an unusual youthful Christ kneeling in prayer, this impressive painting combines an extraordinarily realistic effect of the moon and unusual lighting effects with a powerfully atmospheric depiction of the biblical scene.

Some of Jan Gossaert’s most compelling paintings depict sensuous, mythological nudes that can be understood as a celebration of corporeal pleasures. Reviving classical eroticism, their idealised forms are voluptuous and seductive yet also sculptural, painted to evoke the sheen of marble. Long time patron Philip of Burgundy – who was a churchman as well as Admiral of the Netherlands – commissioned mythological paintings such as 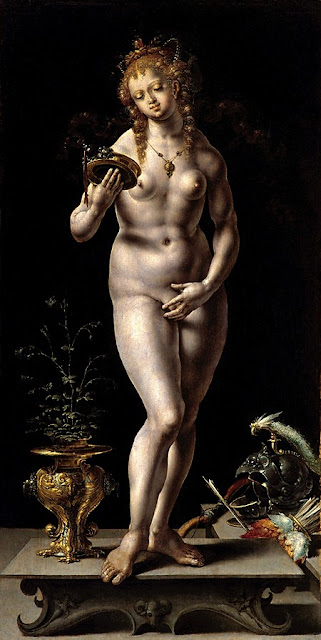 not only for his own collection but also to give as gifts. Paintings, prints and drawings that demonstrate Gossaert’s portrayal of the nude and his adaption of the eroticism of the past were displayed in Room 3.

In a series of paintings of the Virgin and Child, Gossaert explored the natural, lifelike relationship of mother and child – a motif that was introduced to painting of the Low Countries in the early 1520s. Taking inspiration from Italian Renaissance examples, Gossaert created new compositions and poses of figures, but also focused on the motif of the child at play. Featured works included '

in which Gossart emphasised the sensuous nature of the intimate embrace of the figures,

and the exquisite and fine

'Virgin and Child' (about 1525, The Art Institute of Chicago, Illinois).

Here, the sculptural forms of the Virgin and Child surrounded by the brilliance of the sun’s rays virtually burst out of the frame.

The final – and largest – room of 'Jan Gossaert’s Renaissance' was devoted to portraits and will showcase his remarkable ability to represent the lifelike appearance of individuals. His close study of physiognomy and extraordinary handling and execution of paint set him apart from his contemporaries in this genre. A highlight was one of the masterpieces of early Netherlandish portraiture:

This room also featured many stunning illusionistic portraits in which Gossaert plays intriguing spatial games, creating figures that seem to emerge from the confines of their frames: from the meticulous 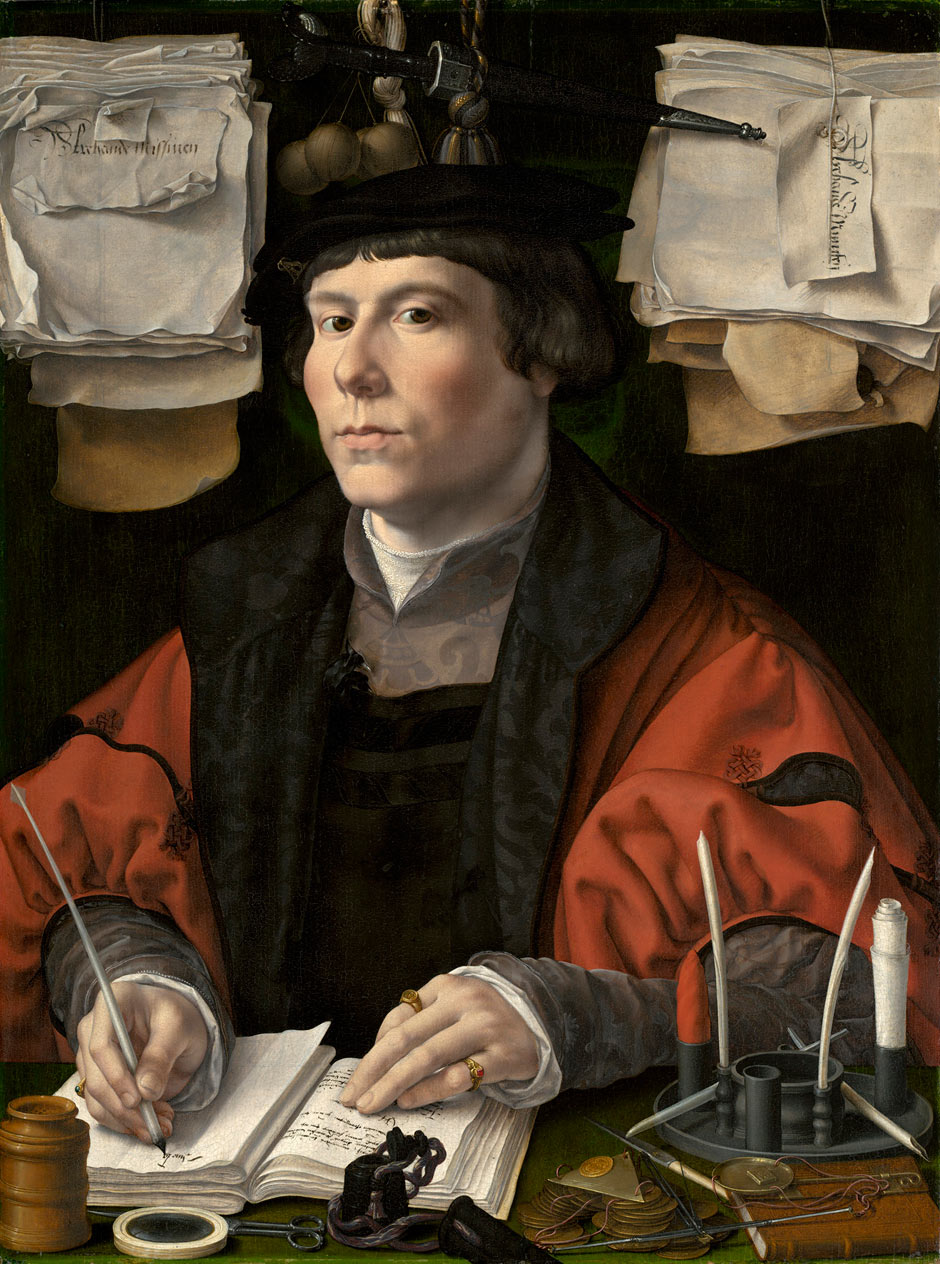 'Portrait of a Merchant' (about 1530, National Gallery of Art, Washington),

a tour-de-force of detail in its accessories and documents, to one of the rare surviving independent portraits of female sitters by Gossaert.

highlights even further the trompe l'œil effect as the figure seems to step out from the frame to meet the viewer, an illusionistic device of which Gossaert was fond.

Jan Gossaert’s Renaissance celebrated Gossaert’s decisive role as an artistic pioneer, bridging the gap between the Northern and Southern Renaissances and paving the way for Low Country artists of the future. 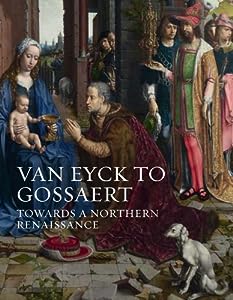 'Van Eyck to Gossaert: Towards a Northern Renaissance'
By Susan Frances Jones

Published alongside the exhibition Jan Gossaert’s Renaissance, this book draws on the National Gallery’s collection, and provides an essay and commentaries on 50 selected works – all magnificently illustrated in colour. The author explores one of the most glorious and innovative periods for Netherlandish painting, beginning in the early 15th century with Jan van Eyck, and ending in the late 16th century with Pieter Bruegel.

Susan Frances Jones was Assistant Curator at the National Gallery, London, from 1994 to 1996 and Old Master Society Fellow in the Department of European Painting at The Art Institute of Chicago from 1998 to 2001.

Posted by Jonathan Kantrowitz at 7:53 AM