“Variations on America: Masterworks from American Art Forum Collections” celebrated the vision and passion of private collectors who are formally affiliated with the Smithsonian American Art Museum. The exhibition presented 72 major artworks, several of which are rarely on public display, from 26 distinguished private collections by some of America’s most talented and cherished artists, including John Singer Sargent, Edward Hopper and Georgia O’Keeffe.

The exhibition was on view from April 13 through July 2 2007. “Variations on America” featured a wide range of paintings, watercolors, pastels, decorative arts and sculptures from the mid-19th century through the 20th century, selected by Chief Curator Eleanor Harvey and Deputy Chief Curator George Gurney.

The exhibition was presented in loose chronological groupings, beginning with two early portraits of children, each touched with sadness.

shows a young Creek boy, whose tribe was part of the “Trail of Tears” forced migration to the west.

is a posthumous portrait of a child felled by illness.

painted soon after his mother came to live with him in London, is one of the artist’s first great experiments with abstraction, prefiguring developments in his art almost a decade later. Broad swaths of grey and tan and white evoke ice floes on the Thames River, with the distant city nearly obscured in smoke and haze.

The exhibition included more than 10 seascapes and landscapes from the 1870s and 1880s, among them major artworks by Sanford Robinson Gifford, Martin Johnson Heade, Winslow Homer, John Singer Sargent and Francis A. Silva, which suggest the variety of expression American artists found in nature.

is a magesterial view across the open landscape and river near the artist’s new home near Hudson, N.Y. 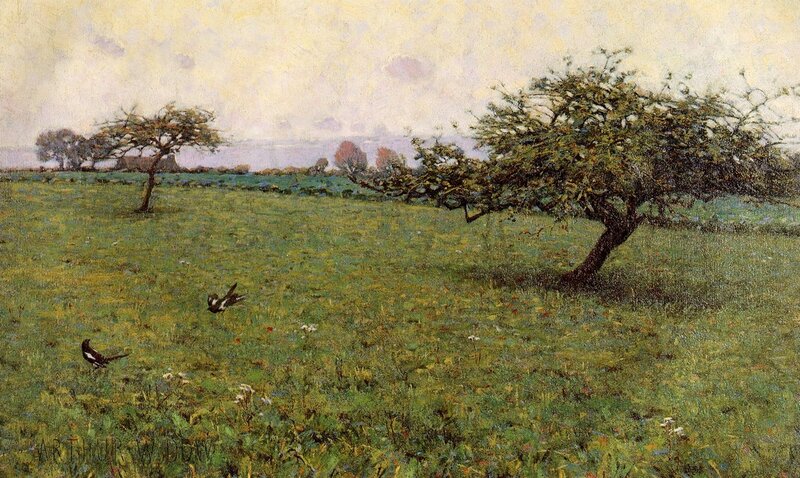 often considered his finest work, creates an unusually intense mood through the handling of trees, an open field and an overcast sky.

Narrative paintings were included, such as

one of his best works celebrating the annual ritual of making maple sugar—a return to rural pleasures at a time of Civil War.

shows how a new marriage can be fraught with tension, even before the morning coffee cups have been cleared.

Some featured objects had not been on public view in many decades. The exhibition is a rare opportunity to see Louis Comfort Tiffany’s acclaimed three-panel stained glass “Dining Room Screen with Autumnal Fruits” (about 1900). When Tiffany exhibited the screen at the 1900 Paris Exposition Internationale, he was awarded the grand prize, beating his rivals René Lalique and Émile Gallé.

Nearby, four major oil paintings by Georgia O’Keeffe revealed the range of her accomplishment, from the delicate blushed tones and vitalistic forms in 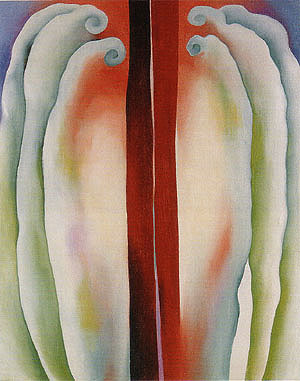 that recalled her earliest abstractions to the richly contrasting 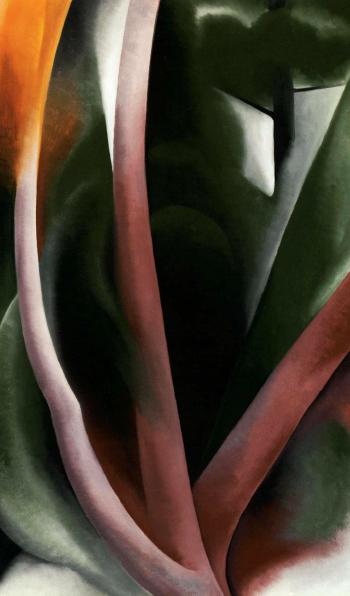 painted near Lake George to the monumental

with its surging land forms and burning colors.

One of the largest groupings was work by the Ashcan School artists who turned from academic studio painting to city streets and public parks and beaches for subjects. Two masterful and brisk pastels by Everett Shinn—

contrast the daily routines of the average city dweller with the grand public monuments then appearing around New York City.

presents industry and construction in the city as an heroic enterprise; 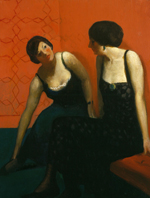 focus on the “new woman” emerging in the age of suffrage marches and liberated lifestyles.

Three extraordinary oils celebrate the spectacle of leisure activities carried out in the public sphere, for all to watch: 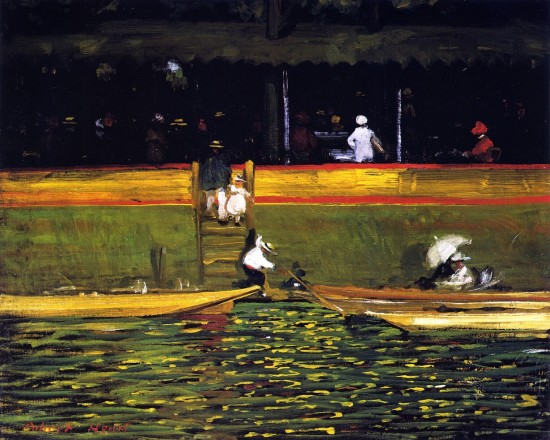 
A choice selection of eight watercolors was a rare chance to see works that are seldom exhibited because of their light-sensitivity.

with three small boys in straw hats gazing out to sea, is among his most affecting works on the subject of American innocence.

is a tour-de-force of technique, with 21 figures navigating stepping stones among the pools of water along Nantasket Beach near Boston, all on a 19 by 15-inch sheet of paper. Superb watercolors by Thomas Anshutz, John Marin, Edward Hopper and Andrew Wyeth complete this group.

that commemorates his father, N.C. Wyeth, and his father’s teacher, Howard Pyle. —are separated by almost 30 years, but displayed remarkable similarities in color and brushwork. —show the artist’s canny reprocessing of minimalism and cubism into a witty personal vision.

Among the other modern and contemporary artworks are a large David Smith bronze sculpture and impressive canvases by Tom Wesselmann, Richard Estes, Alice Neel, Wayne Thiebaud and David Bates.

The exhibition concluded with a 10-foot-tall sculpture by Niki de Saint Phalle titled “La Lune” (1987), in which a goddess’ head appears within a mirrored crescent moon, atop a lobster and turtles encrusted with glass mosaic.

The catalog, co-published by the Smithsonian American Art Museum and D Giles Ltd London, features color reproductions of each artwork with extended entries by the museum’s curators and a foreword by Broun.

Another image from the exhibition:


Posted by Jonathan Kantrowitz at 2:54 PM