The Fondation Beyeler’s exhibition 30 September 2012 to 27 January 2013 of work by Edgar Degas (1834–1917)was the first ever show devoted to this important late 19th century French painter to focus exclusively on his rich and complex late work, the culmination of an artistic career spanning more than sixty years. In Degas’ late work, created between around 1886 and 1912, the creativity of a daring pioneer of Modernism reached its masterly apotheosis.

Although Edgar Degas’s art enjoys great popularity, exhibitions of his work generally focus on his Impressionist phase from the early 1870s to the mid-1880s or on specific aspects of his oeuvre. By contrast, the exhibition at the Fondation Beyeler brought together over 150 representative works encompassing all the themes and series important to an understanding of Degas’s late work: dancers and female nudes, jockeys and race horses as well as landscapes and portraits.

Two Degas pastels in the permanent collection of the Fondation Beyeler provided the point of
departure for the exhibition’s conception:

are masterpieces that clearly demonstrate the radicalism and modernity of Degas’ late work.

The exhibition started at a point in time when Degas’s work was beginning to show signs of fundamental changes in respect of its style and content. In the second half of the 1880s, Degas abandoned the highly detailed, delicate painting that had been his trademark during the Impressionist period, while simultaneously renouncing the »picturesque«, genre-like themes of big city life in Paris. This period saw Degas disengaging from his Impressionist companions as well. With advancing age, he also began to model wax sculptures – three-dimensional, partly fragmentary studies of moving or static human figures and horses discovered in his studio only after his death, 74 of which were later cast in bronze.

The eighth and last Impressionist exhibition took place in 1886. In the three decades that followed, Degas increasingly distanced himself from the art world, shunning contact with the art-loving public. He was one of the few artists who could afford to behave in this way: Parisian dealers repeatedly bought works from his studio for European and American private collectors. Only a small number of solo exhibitions authorised by the artist were held in the years until his death in 1917. That gradual withdrawal from public life has contributed to the impression, still widespread today, that Degas was a difficult loner. From the 1890s onwards, the idiosyncratic bachelor lived in a kind of »inner emigration« in which he surrendered himself solely to his art. The late work he created in the process is one of the most exciting and obsessive to be found anywhere in European art history.

The stylistic characteristics of Degas’s late work include discontinuous spaces, asymmetric compositions that disintegrate, unusual vantage points and unconventional poses by the figures he represents, which are shown in the foreground. The intimate physical proximity of the (male) viewer to the female figures is counteracted by the irritating imprecision of the representation, with its blurred contours. The seductive luminosity of the colours, which fill the pictorial space with an iridescent light, gives what we see in the pictures an indefinite quality, both spatially and temporally. Degas transported what he described as his »orgies of colour« to a remote, dreamlike state in which present and past, things seen and things remembered are indissolubly interwoven.

Through his constant variation and combination of a small number of motifs, Degas created extensive series founded on a pioneering concept of the work of art. Individual paintings cease to be stand-alone works and instead always point to the conceptual premises underlying the »serial« work in progress.

The exhibition at the Fondation Beyeler therefore encompassed not only all the themes Degas explored but also all the techniques he used: oil painting, pastels, drawing, monotype, lithography, photography and sculpture. No other artist of the period experimented with as many forms of artistic expression as he did. He spread, cross-hatched and dabbed the pastels, often with his bare finger. He reworked them with steam and brushes or scraps of fabric, combining them with gouache, tempera and printing techniques like monotype. Pastel technique, which inherently and uniquely combines the qualities of both painting and drawing, as well as being highly tactile, provided the ideal basis for an oeuvre in which individual artistic achievements conditioned and inspired one another.

The Fondation Beyeler presented Degas’s late work in a series of rooms in which different genres and themes are emphasised in turn. Dancers and portraits are followed by women at their toilet, after which come landscapes and interiors and then, at the end of the exhibition, horses and riders.
The show opens with ballet dancers. Interestingly, Degas’s late pictures of ballerinas hardly ever show them dancing on stage, and the glamour of the dance performances of the 1870s has vanished. The waiting dancers, either standing or seated, who feature in these works are young women who are resting, adjusting their costume or practising their dance steps. Degas ceaselessly studied the poses, movements and costumes of the dancers. He repeated, varied and combined figure constellations that provided an occasion for bold experiments with composition and colour.

Of his many oil paintings, pastels and drawings on this theme, three examples deserve particular mention: 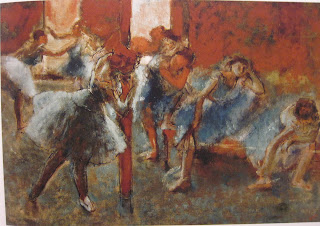 which has been loaned by the Von der Heydt-Museum in Wuppertal, 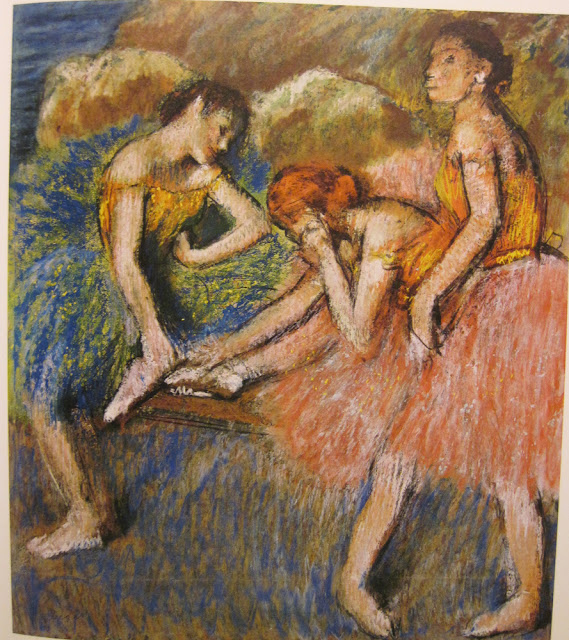 and Danseuses from the Fondation de l’Hermitage in Lausanne,

From The peculiar doings of Meerkat and Jellyfish:

Here are my absolute favourite pieces of him in the exhibition: 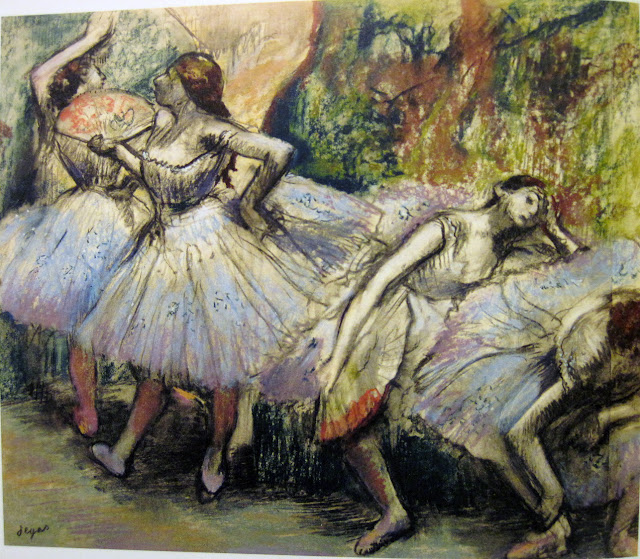 I think the main reason why this piece is my absolute favourite is the face expression of the tired woman in the middle. I absolutely adore the lines on her face. You can really feel her mood. But that's not everything. I really like the body positions and lines in general in this picture. The four women create a red and then blue line with their dresses and hair colour across the whole painting. :D

Light blue against dark red. Perfect juxtaposition. And once again, beautiful black lines, especially on the bale dancer in front.

Yellow against blue with such chaotic strokes. Then we have warmer colours of red and light orange. So much power and "boom" with harmony and quiet, relaxing mood. The sense of "moment" 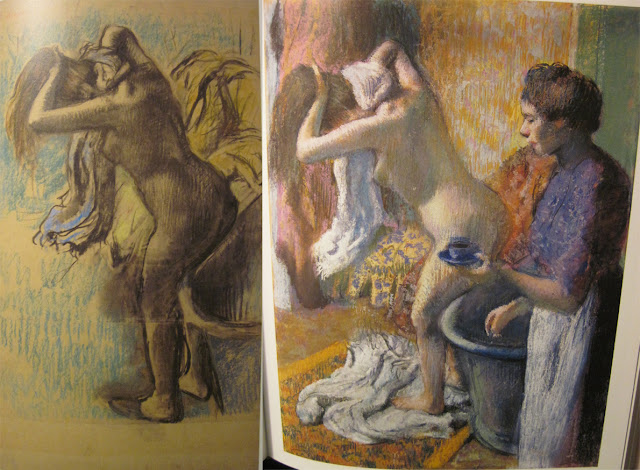 
One room was devoted to Degas’s portraits. All his models were friends and acquaintances of his, some of them long-standing; his close relations with, for example, Henri Rouart, Ludovic Halévy and Paul Valpinçon dated back to his schooldays. This room contained poignant portraits such as that of

which belongs to Richard and Mary L. Gray and the Gray Collection Trust.

Degas liked to spend holidays on his friends’ country estates. The grand home of the Valpinçon family in Normandy provided the setting both for the 1892 work

loaned by the Staatsgalerie Stuttgart, and for the roughly contemporaneous which belonged to a private collection. In the mid-1890s Degas discovered the potential that photography offered for his artistic purposes. In just a brief span of time, he created a series of cleverly staged portraits of famous friends such as that of

loaned by the Bibliothèque littéraire Jacques Doucet in Paris, in which the two men, immersed in twilight, seem to have moved to another sphere.

A further section of the exhibition showed representations of women at their toilet, one of the most frequent pictorial themes in Degas’s late work. The 1883 pastel

Femme au tub from the Tate

are two particularly fine examples from the 1880s. Most of the late representations of women who are washing or drying themselves or combing their hair are a significant departure from the idealised representation of naked women traditional in the history of European art. With this theme, Degas’s desire to experiment with colour – as found in, for example, the oil painting

loaned by the Art Gallery of Ontario in Toronto – as well as his tendency to represent unusual physical poses come into their own. The latter was exemplarily illustrated by the famous oil painting

from the Philadelphia Museum of Art, which dates from around 1896, in which a female nude, her body arched in an unusual position, seems to be clinging to the back of a chair in an empty, monochrome room.

With his last works, created after the turn of the century, Degas approached the boundaries of abstraction. This is shown particularly radically in the pastel

loaned by the Musée cantonal des Beaux-Arts in Lausanne, in which the colour spectrum is reduced to hues of red, orange and yellow – and the colour values blend into one another with the finest nuances.

A separate room presented landscapes by Degas, which are hardly ever shown in public, as well as works with horses and riders. In the autumn of 1892 Degas surprised the Paris public with an exhibition at the Galeries Durand-Ruel devoted exclusively to landscapes. The choice of works caused uncertainty among the public because it was widely known that Degas had previously always been very disparaging about landscape – the genre for which the Impressionists were best known. The medium and format chosen by Degas caused additional irritation. His landscapes were not imposing oil paintings like those of Claude Monet and Camille Pissarro, but were small-format monotypes printed on sheets of paper. In addition, his works, which were often heightened with pastels, had little in common with the luminous magic of Impressionist landscape painting. Created in his studio in the early 1890s, they in fact often prefigure the dreamily remote landscapes of the generation of Symbolists who were to follow. Degas’s last landscapes include oil paintings inspired by his visits to the small seaside resort of Saint-Valery-sur-Somme in Picardy, among them Vue de Saint-Valery-sur-Somme from 1896–98, which The Metropolitan Museum of Art in New York loaned for the exhibition.

In his late years, Degas used various techniques to represent the motif of horse and rider. In addition to the 1884 oil painting

which had been loaned by the Detroit Institute of Arts,

the exhibition featured a selection of sculptures, including Cheval en marche modeled in the early 1870s, and two examples each of later works featuring jockeys, in the first case, and horses, in the second. These works, all of them from Swiss private collections, documented Degas’s preoccupation with the representation of complex movements in precarious moments of transition.

on loan from the Kunstmuseum Basel, provided the exhibition’s grand finale.

The exhibition was conceived by guest curator Martin Schwander, who has worked together with Michiko Kono, Associate Curator at the Fondation Beyeler, on its staging. Martin Schwander was earlier responsible for the exhibition «Venice. From Canaletto and Turner to Monet» in 2008/09.

Edgar Degas reflected the Fondation Beyeler’s tradition of holding exhibitions devoted to artists represented in the permanent collection. With Le Petit Déjeuner après le bain from 1895–98 and the 1903 work Trois danseuses (jupes bleues, corsages rouges), the Fondation Beyeler owns two masterpieces that vividly demonstrate the radicalism and modernism of Degas’s late work. Both paintings can be seen in the exhibition.

Despite the fragility and light-sensitivity of most of Degas’s late works, it was possible to secure a substantial number of outstanding loans from, in particular, the Kunstmuseum Basel, the Museum of Fine Arts in Boston, the National Gallery in London, the Bayerische Staatsgemäldesammlungen in Munich, the Metropolitan Museum of Art in New York, the Museum of Modern Art in New York, the Nasjonalmuseet for kunst, arkitektur og design in Oslo, the Musée d’Orsay in Paris, the National Museum of Western Art in Tokyo, the Hirshhorn Museum and Sculpture Garden in Washington, the Kunsthaus Zurich and the Tate as well as well-known European, American and Asian private collections.

The Fondation Beyeler published a catalogue for the exhibition in German and English. The catalogue, which contains a foreword by Sam Keller and Martin Schwander, an interview with the artist Jeff Wall, essays by Carol Armstrong, Jonas Beyer, Richard Kendall and Martin Schwander as well as a biography by Mareike Wolf-Scheel, has 268 pages and 232 illustrations. (ISBN 978-3-906053-03-5, English).

Posted by Jonathan Kantrowitz at 4:38 AM