Major Benson Exhibition Opening at the Farnsworth Rockland , Maine -- 15 May 2012.

On Saturday, June 17, the Farnsworth Art Museum in Rockland, Maine, will open a major exhibition in the museum's Morehouse wing, entitled Impressionist Summers: Frank W. Benson's North Haven. The show of approximately seventy works will examine how Benson's art was affected by his life on North Haven, where he created almost all of his brilliant, sun-drenched Impressionist paintings.

Study for Young Girl with a Veil
This exhibition examines Frank W. Benson's long and productive career in the context of his life and work at his summer home, Wooster Farm, on the island of North Haven, Maine, thirteen miles off the coast of Rockland. The renowned artist's island home was where he launched his prolific etching career and began making his highly successful watercolors. Through his paintings, both oil and watercolor, drypoints, etchings and lithographs, the exhibition will illustrate the important ways in which life on North Haven affected Benson's art. Impressionist Summers: Frank W. Benson's North Haven is organized by Guest Curator Faith Andrews Bedford, with a fully illustrated catalogue published by Skira Rizzoli Publications, Inc.

The Farnsworth Art Museum celebrates Maine's ongoing role in American art. It offers a nationally recognized collection of works from many of America's greatest artists, with 20,000 square feet of gallery space and over 10,000 works in the collection. The Farnsworth has one of the largest public collections of works by sculptor Louise Nevelson, while its Wyeth Center features works of N.C., Andrew and Jamie Wyeth. The National Register listed Farnsworth Homestead, the Olson House, a National landmark, and Julia's Gallery for Young Artists complete the museum complex.. 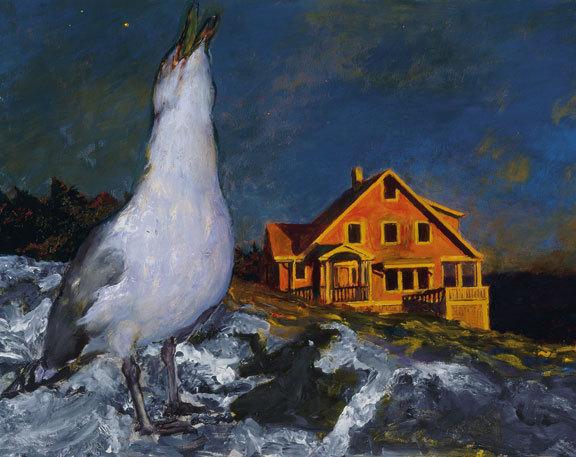 On Saturday, May 12, the Farnsworth Art Museum (www.farnsworthmuseum.org) in Rockland, Maine, opened a major exhibition in the museum's Wyeth Center, entitled Jamie Wyeth, Rockwell Kent and Monhegan. The show is scheduled to run through December 30, 2012.

Jamie Wyeth's connection to Monhegan dates to the late 1950s, when he first went there with his father, and he has continued to paint there ever since. His connection to fellow artist Rockwell Kent goes back nearly as far. Early in his career Wyeth bought several pen and ink drawings by Kent used as the sources for his illustrations to Herman Melville's Moby Dick, one of Kent's most renowned book illustration projects. Subsequently, Wyeth acquired what was Kent's last home and studio on Monehgan, and then bought several of Kent's paintings from his first period on the island around 1907. This exhibition will focus on works by the two artists done on Monhegan, and how the scenic island has inspired their work.

Celebrating Maine’s Role in American Art, the Farnsworth Art Museum offers a nationally recognized collection of works from many of America’s greatest artists. With 20,000 square feet of gallery space and over 10,000 works in the collection, there is always something new on view at the Farnsworth. The museum houses the nation's second-largest collection of works by premier 20th-century sculptor Louise Nevelson. Its Wyeth Center exclusively features works of Andrew, N.C. and Jamie Wyeth. The Farnsworth's library is also housed in its Rockland, ME, campus. Two historic buildings, the Farnsworth Homestead and the Olson House, complete the museum complex.

Posted by Jonathan Kantrowitz at 1:28 PM