Celebrated as one of the greatest modern artists, Joan Miró (1893–1983) developed a visual language that reflected his vision and energy in a variety of styles across many media. On view at the National Gallery of Art, Washington, East Building, from May 6 to August 12, 2012, Joan Miró: The Ladder of Escape reveals the politically engaged side of Miró through some 120 paintings and works on paper that span his entire career. They reflect the artist's passionate response to one of the most turbulent periods in European history that included two world wars, the Spanish Civil War, and the decades-long dictatorship of Francisco Franco. Through it all, Miró maintained a fierce devotion to his native Catalonia, a region in northern Spain.

The exhibition was organized by Tate Modern, London (April 14 through September 11, 2011), in collaboration with Fundació Joan Miró, Barcelona (October 14, 2011, through March 18, 2012), and in association with the National Gallery of Art, Washington.

"Telling the story of Miró's life and the times that he witnessed reveals a dark intensity of many of his works. Behind the engaging innocence of his style lie a profound concern for humanity and a sense of personal identity," said Earl A. Powell III, director, National Gallery of Art, Washington. "The Gallery is honored to be the only U.S. venue for this landmark exhibition, and we are grateful to the many lenders, both public and private, who made the exhibition possible."

Joan Miró: The Ladder of Escape traces the arc of Miró's career while drawing out his political and cultural commitments. The exhibition presents these themes through three principal periods: Miró's early work, rooted in the Catalan countryside, and then transformed under the influence of the surrealists in the 1920s; his artistic response to the Spanish Civil War (1936–1939), the fall of France, and life under fascist rule; and the artist's late work just before the demise of Francisco Franco's dictatorship in 1975.

The first room of the exhibition explores Miró's early work and his so-called detailist style. Focusing on the Catalan coastal village of Montroig, where Miró spent most of his summers, the paintings include scenes of his parents' farmhouse, the village church, and the region's tilled fields. Critical works from this period include Vegetable Garden with Donkey (1918) and The Farm (1921–1922), a painting that Miró regarded as a key work in his career. Painted in Paris, it combines Miró's memories of Montroig with elements of cubism, abstraction, and primitivism. Ernest Hemingway purchased The Farm shortly after it was painted. Years later, in 1987, Mary Hemingway donated it as a gift to the National Gallery of Art. Two important works painted just a few years after The Farm, The Hunter (Catalan Landscape) (1923–1924) and The Tilled Field (1923–1924), reflect not only the liberating influences of surrealism, but also Miró's own maturity.

When Joan Miró was seventeen, he first visited his parents’ new summer house, near the Mediterranean Sea. It was a farm in Montroig, a village about sixty miles from Barcelona, Spain. His love of the countryside in Montroig led to his lifelong custom of spending his summers there.

The clay-colored, parched, and rocky-looking soil, the dryness of the vegetation on the barn, and the yellow haze that seems to rise on the horizon indicate the region’s hot and arid climate. Water was clearly at a premium. Without the benefits of a public water supply, the farm used both a cistern—seen between the barns—to collect precious rain water for washing and watering—and a well, located behind the cistern, to supply drinking water. Miró said of The Farm:

The painting was absolutely realistic. Everything that’s in the painting was actually there. I didn’t invent anything. I only eliminated the fencing on the front of the chicken coop because it kept you from seeing the animals.

Miró says that the painting is a realistic depiction. However, it seems to fluctuate between a realistic recording of the scene and more dreamlike imagery. The landscape, for instance, pulsates with hot, clear sunshine, but the blazing light casts no shadows. In the midday sky, the sun is represented by a disk that, oddly, is silvery gray—the color of the moon. A cart totters on a single wheel. Moreover, we know the barn at Montroig was well kept, not crumbling as it seems to be here.

Dog Barking at the Moon

Drawing upon the surrealists' interest in free association, Miró created a series of "animated landscapes" where he used only rich fields of color and a handful of forms. Miró juxtaposed animals with unrelated objects: a hare with a spiraling sphere in Landscape (The Hare) (1927); and a dog and rooster, respectively, with a ladder in Dog Barking at the Moon (1926) and Landscape (Landscape with Rooster) (1927). In these early appearances, the ladder motif suggests a bridge between earth and heaven, and reality and imagination.

Though he was born in metropolitan Barcelona, Miró identified with the peasant, which he took as an emblem of Catalan nationalism. In his Head of a Catalan Peasant (1924–1925) paintings, Miró reduced the face and body of the figure to abstracted symbols (including the peasant's barretina, or red cap). His self-identification with this figure, at a time when Catalonian autonomy was under siege from the government of Miguel Primo de Rivera, suggests these works may have been a direct political statement. The exhibition in Washington brings together multiple canvases from the series.

In 1929 Miró married Pilar Juncosa and they settled in Paris, but returned to Barcelona (the capital of Catalonia) in 1932. Working in Barcelona, Miró was well aware of the turmoil and uncertainty preceding the Spanish Civil War. He initially remained in Spain after the war began in July 1936, but by the end of the year he and his family went into self-exile in France. They followed the war from afar until the approaching Nazi troops forced them back to Spain in 1940, when they settled on the island of Mallorca. More than any others in his career, the works Miró made during this period depict war and violence. Some works conjure the fearful times through their distorted imagery: figures crying in anguish, raising their arms in protest, standing by a volcano waiting to erupt. Other works evoke the danger through garish colors or violent application of their materials. Still Life with Old Shoe (1937), with its acid colors and distorted objects, transforms a tabletop still life into a profound commentary on the dramatic times. 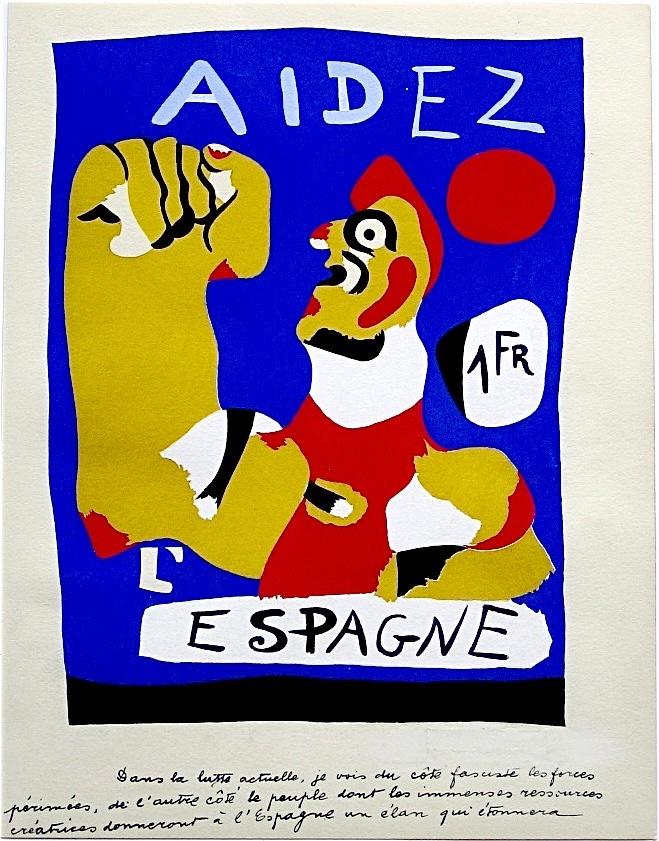 While Miró's political statements were oftentimes subtle, the exhibition also showcases works that demonstrate overt resistance—such as Aidez l'Espagne (Help Spain) (1937). This work is an original design for a one-franc stamp in support of Spain's Second Republic; however, France's adoption of a nonintervention agreement stopped the stamp's production and the work became a poster instead. Initially exhibited clandestinely in Spain, the Barcelona Series of lithographs (1944), more than 40 of which are on view, draws upon traditions of political caricature and takes aim at tyranny and dictatorship.

The final two rooms of the exhibition cover the last years of Franco's rule, when Miró, influenced by abstract expressionism, turned to making monumental paintings, both calm and explosive. The works alternate between a growing dissatisfaction with the regime and a feeling of hopefulness as the rebellions of the 1960s prompted political change elsewhere. Miró's grand abstract paintings of the late 1960s and early 1970s, including Mural Painting I–III (1962) and Fireworks I–III (1974), became a mark of his resistance and integrity in the final years of the regime, a period of intense self-examination for the artist.

In Composition and Untitled (both 1972)—scroll-like works on Japanese paper that extend nearly 30 feet—Miró demonstrates a graphic flair that characterized his work throughout his life. These two works are on view in the National Gallery of Art Library along with Miró's introduction and lithograph from a 1972 Alexander Calder exhibition catalogue from the Sala Pelaires Gallery in Palma de Mallorca, where Miró was a resident. By that time friends with Calder for 40 years, Miró created an introduction that comprises a series of recollections from their friendship in both French and Catalan, illustrated with colorful shapes and symbols.

Franco's last years in power were marked by mass unemployment and a cycle of protest and crackdowns. The tension culminates in Miró's Burnt Canvases from 1973, where he splashed paint onto a canvas, torched it, and then walked across the surface. He attempted to harness what he called the "inventive force" of fire.

The exhibition was curated by Marko Daniel and Matthew Gale, Tate Modern, in collaboration with Teresa Montaner, curator, Fundació Joan Miró. It is coordinated at the National Gallery of Art, Washington, by Harry Cooper, curator and head, modern and contemporary art.

Posted by Jonathan Kantrowitz at 10:53 AM