Nowhere has the early genius of the twentieth century's most prolific and influential artist been more clearly realized than in the extraordinary exhibition Picasso: The Early Years, 1892-1906, which premiered at the National Gallery of Art, March 30 through July 27, 1997. It then traveled to its only other venue, the Museum of Fine Arts, Boston, September 10, 1997, through January 4, 1998.

This was the most comprehensive survey ever assembled of works created by Picasso between the ages of eleven and twenty- five, including his famous Blue and Rose periods, prior to the advent of cubism. The master's early work is distinguished by a remarkable range of styles and techniques.

Organized by the National Gallery of Art and the Museum of Fine Arts, Boston, the show contained approximately 150 paintings, drawings, pastels, prints, and sculpture, including works that had never before been exhibited in the United States.

"This extraordinary assemblage of works tracing Picasso's development is unprecedented," said Malcolm Rogers, director, Museum of Fine Arts, Boston. "This exhibition reveals not only the beginnings of Picasso's early genius, but also the origins of the modernist movement in European art."

Pablo Ruiz Picasso, born in Málaga, Spain, on October 25, 1881, began to draw and paint around the age of seven and was registered in the School of Fine Arts in La Coruña in 1892. His real artistic training began in Barcelona three years later, a city to which he often returned after sojourns to Madrid and Paris, until he took up permanent residence in Paris in 1904. 
The exhibition begins with Picasso's academic studies of plaster casts and nudes and early portraits, such as Girl with Bare Feet (1895) from the Musée Picasso, Paris. Spanish Couple before an Inn

His subsequent introduction to post-impressionist and symbolist painting is shown in such works as Spanish Couple before an Inn (1900) from the Kawamura Memorial Museum of Art and Moulin de la Galette (1900) from the Solomon R. Guggenheim Museum, New York. Two Women at a Bar

Works from the artist's Blue period, named for the monochromatic palette he used to represent figures largely drawn from the socio-economic underclass in Barcelona and Paris, include the paintings Two Women at a Bar (1902) from the Hiroshima Museum of Art, Crouching Woman (1902) from the Art Gallery of Ontario, and La Vie (1903) from The Cleveland Museum of Art, as well as the 1904 etching The Frugal Repast. Distinguished by a palette of roseate hues, works in the show from Picasso's Rose period include the paintings Family of Saltimbanques (1905) from the National Gallery of Art, Washington, and Harlequin's Family with an Ape (1905) from the Göteborgs Konstmuseum, Sweden.

By 1906, inspired by a trip to the Spanish Pyrenees, Picasso imbued his figures with a monumentality that can be traced to the reductive proportions of ancient and medieval Iberian sculpture. This is illustrated in such paintings as Woman with Loaves (1906) from the Philadelphia Museum of Art and Nude on Red Background (1906) from the Musée de l'Orangerie, Paris. The exhibition ends with this phase of Picasso's work, as his subsequent interests foreshadow a new epoch in the artist's career. 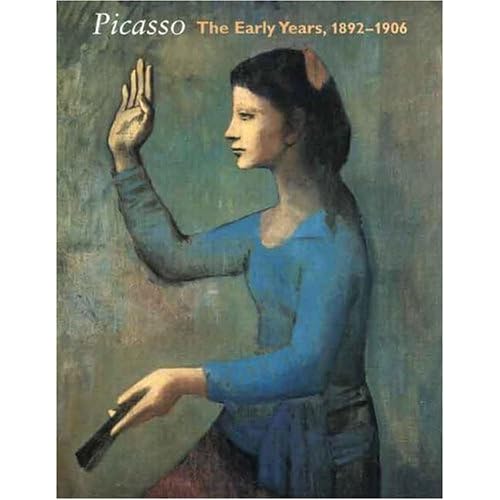 A 400-page fully illustrated catalogue entitled Picasso: The Early Years, 1892-1906 was published by the National Gallery of Art in paperback and by Yale University Press in hardback. It contains ten essays by Picasso scholars, arranged chronologically with color plates of early works by the artist, as well as an extensive chronology of Picasso's early life from 1881 to 1906.