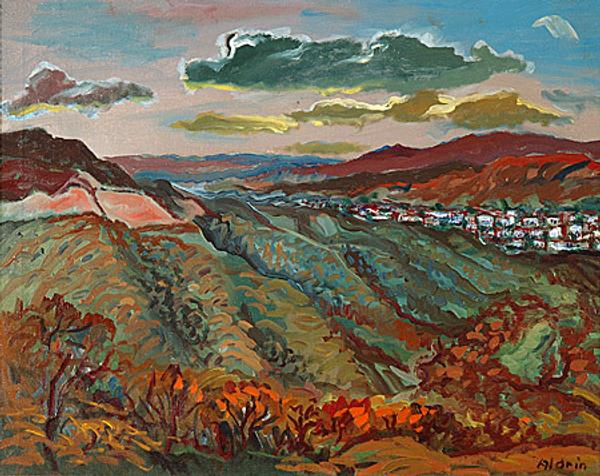 Sullivan Goss – An American Gallery presents ANDERS ALDRIN: THE RED LINE through July 1, 2012. Swedish born Anders Aldrin (1899-1970) moved to Los Angeles in 1923 with a passion for painting that had been suppressed for most of his life. An artist with limited financial means, Aldrin could only paint when he had spare time. Without a car in a famously unwalkable city, he would hop on the Red Car Line and paint the cityscapes, people, and bridges of the modern wonder that was Los Angeles. As the glamour of Old Hollywood gave way to the power plants and steam stacks of the imminent future, Aldrin succeeded in preserving a historic record of this shift in industrialization through his expressive and boldly colored paintings.

Aldrin was clearly inspired by Matisse’s early Fauve paintings like “The Red Room (Harmony in Red),” even though he was never able to see such seminal works in person. (Matisse wouldn’t have his first major museum show in LA until 1966.) Indeed, although he was fifteen to thirty years late and seven thousand miles away from the birth of the French movement, Aldrin should be considered one of the truest Fauves. Like Matisse, Aldrin’s use of red is both prominent and crucial to his compositions. The Los Angeles art critic Arthur Millier noted that “to Aldrin the world is dominantly red and green, but how he makes these colors sing!”

Trained at the best art schools in Los Angeles, Santa Barbara, and San Francisco, Aldrin was respected and even revered by his fellow painters, though his highly personal vision limited his opportunities for gallery shows. LA artist Millard Sheets said, “The work of this man is a declaration of independence from the styles and manners of his contemporaries and is the most forthright work I have seen produced in California. Strong poetry--flavored with color--free from imitation--solid construction--make his painting as honest as the man is himself.” Aldrin’s paintings of Los Angeles as a burgeoning industrial city are doused in color and full of painterly impasto. His poetic sense of color took form alongside the city. In the artist’s search for new subjects to paint, he created a colorful record of the development of LA.

Posted by Jonathan Kantrowitz at 10:52 AM